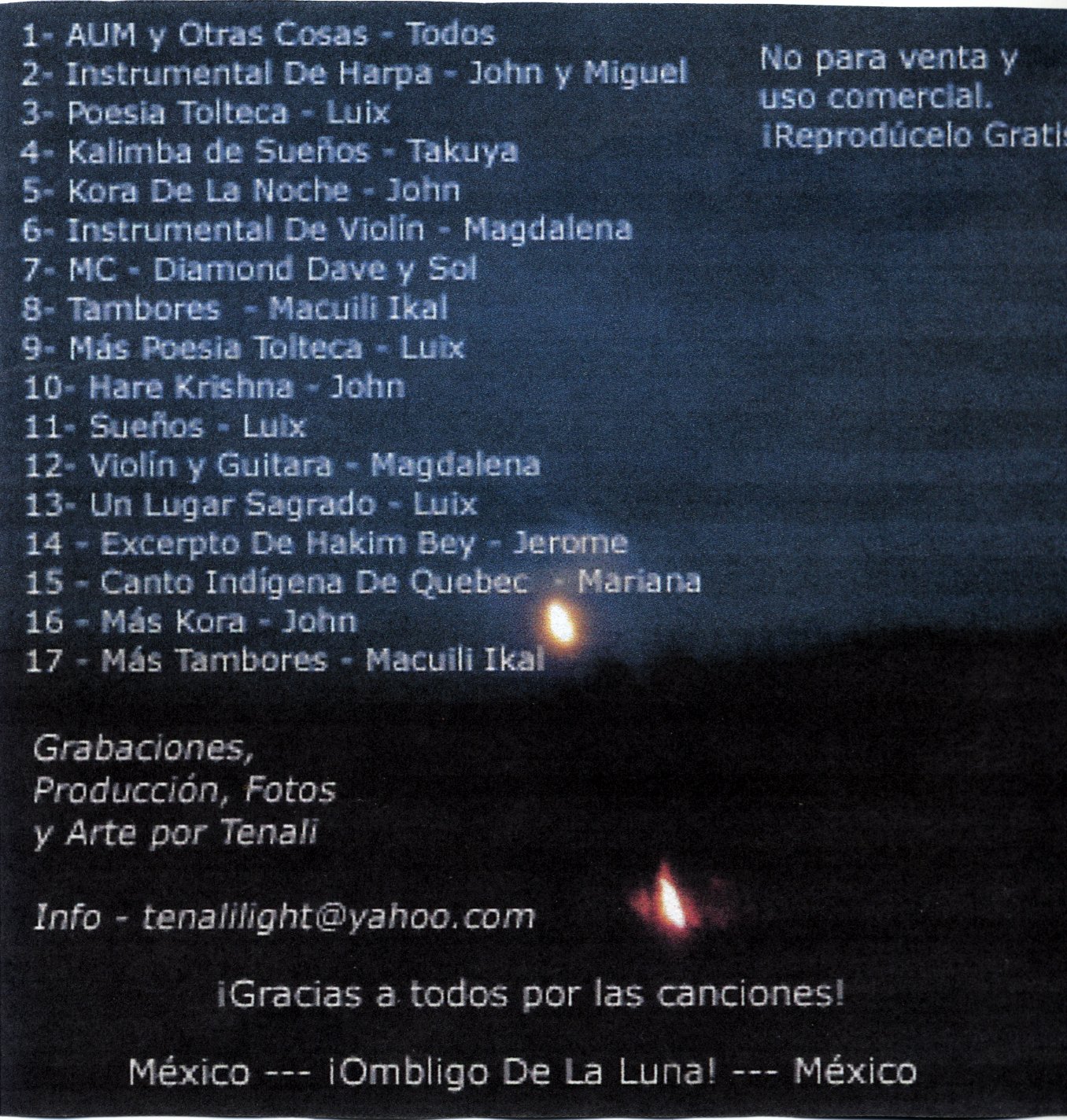 This collection contains music from the 2005 Rainbow Gathering of the Tribes in Mexico. Tenali has been recording music at Rainbow Gatherings for the past several years, and has been releasing "Rainbow Family Circus & Tribal Zoo" CDs of his work. He sent me a copy of this CD so that I could endcode it on the computer and publish it via the Internet Archive. This music is provided to you for free in loving kindness. Please feel free to redistribute this music non-commercially. And if you do, be so kind as to give full attribution to those who came before you for their kind efforts.

All the music was encoded to .flac files directly from the CDs Tenali sent to me. I used Sound Juicer 2.10.1 (Linux), which output the FLAC files using 16-bit encoding. I used the Reference FLAC Player v1.1.1 plug-in for XMMS (v1.2.10) both to test the files for playability and to edit the meta-data.

If you have MP3 or OGG versions of these files (both lossy formats), but would like the FLAC versions (lossless), you can find them at www.archive.org.

If anyone cares to take the time to write out lyrics for these songs (with or without translations), I will be happy to update the collection to include them in a text file.

Tenali just emailed me some track notes that he'd like to offer with the collection. I already posted the files so they don't appear in the text file (yet)... I'd have to re-upload the entire album to make the change (bummer). So I will put them here for you:

...mexico notes...
TRACK 1-- I recorded this sitting on a hill during the
full moon dinner circle song and aum. The whole thing
sounds kinda trippy.

TRACKS 2,5,10 7 16-- These songs were performed by
John(who is originally from France)either played on
his wonderful 8 string harp that he had built or his
many stringed african kora. Great songs!

TRACKS 3,9,11 & 13-- These songs were performed by
Luix who is from Mexico. He studies the ancient
languages and cultures of Mexico and songs 3 and 9
are examples of ancient Toltec poems set to music.
Luix explained to us that song 3 is an ancient poem
that speaks about people gathering together to share
and be together with the green earth, the birds, etc.

TRACK 4-- Performed by Takuya from Japan. This was
perfomed late at night after an open mic and his
kalimba playing seemed to hypnotize us all. after this
track i mixed in a popcorn moment that became a later
night tradition at the bakery this was performed by
the popcorner folks who you may remember from the
california rainbow.

TRACKS 6 & 12-- Performed by Magdalena who is from
Austria. These songs were recorded at the bakery
lounge prior to dinner circle and as the night was
coming upon us. With this song and many others
throughout this cd you can hear the haunting night
bird in the background. These birds were out every
night calling and responding throughout the valley.
Very mystical bird. Kinda like the Loon of the
northwoods.

TRACK 7-- A sample from the terrific MC's Diamond Dave
and Sol. Diamond Dave has been hosting open mics at
rainbows for many years, and listening to Sol(Mexico)
translate his quickly flowing passages was a great
joy for anyone that attended those open mics.
Awesome!

TRACKS 8 & 17-- Performed by the drum troupe from
Mexcio city Macuili Ikal. The drum track 8 is from the
Spring equinox celebration/cermony that we had at the
main circle while yummy tea was being served. The
second track is pre-dinner circle jamming.

TRACK 14-- This is an excerpt by Jerome(the states)
during the first open mic. He is reading words from
the writer Hakim Bey.

TRACK 15-- This is a chant from the native people of
Quebec performed by Quebec native Mariana during the
second open mic.

The rainbow family of living light is said to be made up of tribes and families and people from all walks coming home together as one human family gathering together on the land. A rainbow gathering is different for every one. You may find people actively creating postive commuity with one another, learning and teaching ways we can live in harmony with nature, our mother earth, and each other. And celebrating life together. There is no formal organization or leadership. It is felt by many to be contrary to the spirit of the gatherings. It is said that any one with a belly button may consider themselves part of the rainbow family, and that even a belly button is not really needed. We are all welcome home as one family.

There have been gatherings called Rainbow Gatherings since at least 1972, and there has been at least one large gathering of the tribes every year in the US on public land around the 4th of July since then. Many gather then to pray for peace and healing in the world. There are also gatherings in many parts of the world, in different countries and continents, and even world gatherings. There are many local and regional gatherings throughout the year. Some are timed with solstice or equinox or other special times and seasons.

It may be that there have been gatherings before or since the "first" rainbow gathering in 1972 that may not have called themselves rainbow gatherings but were of the same spirit. The gatherings are called rainbow because they are for all the peoples of the earth, from many families, tribes, and nations. Some say that the Hopi people native to North America tell a vision of a time when mother earth, the land, air, waters, and creatures of all kinds, were sick with poisons and ill treatment by people. The children of the white races, or more specifically the people who lived the cultures of those who displaced the native peoples of the Americas (not just caucasions) would grow their hair long, wear beads, and come together with the children of all the nations to heal the earth.

Intentional community, respect for indigenous peoples and culture, ecology, and spirituality are common themes with peoples of the rainbow.