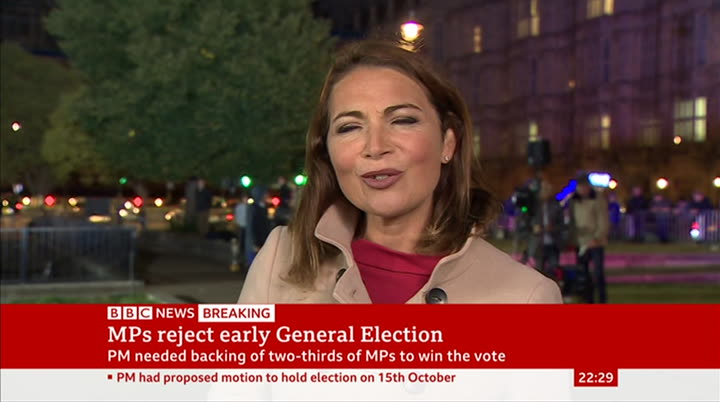 you know, i ask the eu. so there is, you know, i would say possibly exasperation, but that indicates too much emotion. i think what is interesting here is a stark contrast between all the emotion we are seeing in the uk parliament at the moment, that heated debate, and the mood in brussels, which is more dispassionate. we are waiting, watching and drinking tea is what one diplomat put it to me, this is not because the eu is not interested , not because the eu is not interested, it is because they are hearing a lot of things. hearing about a possible general election, hearing about a possible new brexit extension, and by the way, if the uk we re extension, and by the way, if the uk were to ask for one, eu leaders are almost certainly guaranteed to say yes to one, but until these things actually materialise, the eu is not engaging in them because under eu law right now, whatever is going on in parliament, the eu's negotiating partner remains her majesty's government with boris johnson partner remains her majesty's government with borisjohnson at its helm, and with that being the case, and with the kind of interactions they have had with his team so far,
10:31 pm 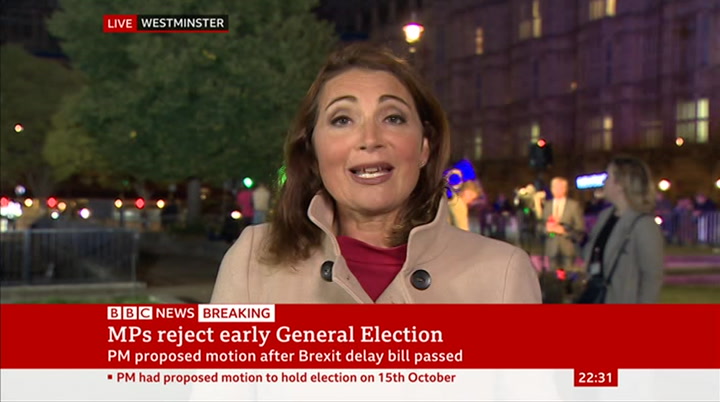 out with eu leaders because they won't do any thrashing. if he does have any, they will say thank you very much, we will now go away and think about it. the reason eu leaders are sticking to the rule of not negotiating at the summit comes down to eu unity, because the eu is not used to unity. you know how they bicker and argue, member states over euro zone reform or migration. when it has come to brexit they are sticking together and the way they are doing that is by keeping their differences behind closed doors. that is why the european commission is negotiating a behalf of eu leaders, so they've got a single front, not 27 different opinions. so in order to keep up that eu unity, they will not engage as 27 individuals with the prime minister at the summit. so thatjust not will be possible. if the uk sticks to the idea of leaving the eu by the 31st of october, then the eu predicts as i have said to you that they will be
10:33 pm

more brexit emergency sabitzer between mid—october and the end of it in order to try to —— emergency summits, in orderto it in order to try to —— emergency summits, in order to try and solve the problem but they don't see a solution at the moment, they don't see the borisjohnson government coming up with any practicable solutions of how you could renegotiate the brexit deal so that it is acceptable to both sides, the eu and the uk, and that is why for now the eu thinks no deal is the most likely outcome. let me explore the idea of eu unity. one area there was a difference, to what degree to extend brexit last time. emmanuel macron saying six months is enough, not the year. he gets frustrated more openly than some european leaders. any possibility that he or one of the big guns can say this can't go on anymore? when we had that drama with emmanuel macron, it was in april. i'll give you the
10:34 pm 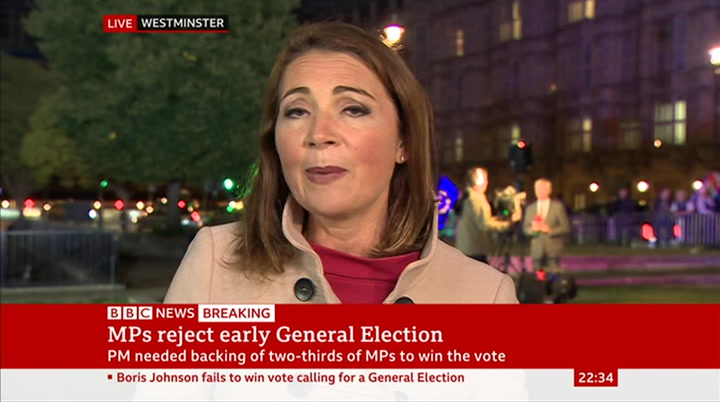 answer. it was just before the european parliamentary elections. who was emanuel macron‘s party standing against? marine le pen. he couldn't afford to be soft on brexit which is why he had to be seen to be taking a hard line. just before the biarritz summit he said he was happy to play the bad cop on brexit but there aren't such huge divisions inside eu circles on the idea of an extension in reality. we are talking about public personas and what they believe behind closed doors. even to avoid a blame game. in the case of a no—deal brexit, eu leaders won't wa nt to no—deal brexit, eu leaders won't want to be seen to be the ones slamming the door in the face of the uk. it is hard to see circumstances where the eu don't grant an extension but threatening and moaning, plenty of that before we see an extension. if you don't
10:35 pm 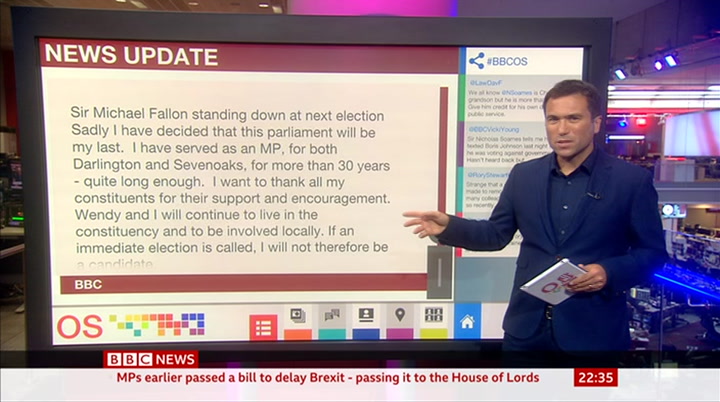 subscribe to the brexit podcast, go and sign up to it. very easy to find, normally at the top of the charts on itunes and other distributors. the conservative party is under pressure on the issue of europe as perhaps never before. it has threatened in the past to split the tory party and it looks like it's the tory party and it looks like its beginning to happen. so michael fallon has announced he will not stand in the next election. he doesn't give any further reasons but another big beast of the party exiting the scene. alistair burt saying he wouldn't stand again, uncomfortable with borisjohnson's brexit policy. justin greening, pointing to discomfort with how the tory party is going about its work.
10:36 pm

we had this from david gauke, part of the 21 who voted against the government yesterday. he has tweeted in the last few minutes. that is a dig at the prime minister pass main advisor, the man who led the vote campaign in 2016 and has been brought into number ten by borisjohnson to guide his approach to delivering brexit. a number of tory mps, now former tory mps, suggesting that dominic cummings isn't even a member of the conservative party. we can't confirm that but the perception is that people who don't have the party at heart, but brexit as the number one goal, are dominating the conservative party. these rebels had lost the whip, now they are in the
10:37 pm 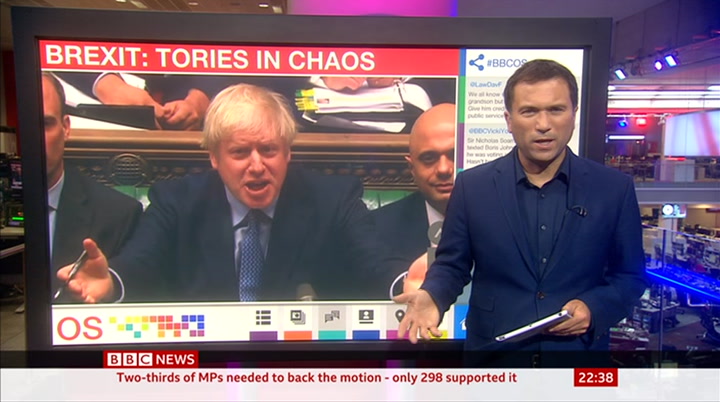 which i have been proud and honoured beyond words to be among them. i am truly very sad that it should end in this way. boris johnson voting against mates back deal twice but wasn't expelled from the party but his supporters say this is different —— voted against theresa may's deal. some party members —— some mps are being told that they are out of the party completely which may mean the end of their career but not for everyone. philip hammond was the chancellor if you weeks ago, and mp for 22 years, and he sounds like he isn't going anywhere. my approach is to stay and fight and i will fight for the party ijoined and party i believe the conservative party must be, a broad, inclusive centre right party for as long as i can do so.
10:39 pm

these mps knew what they were doing when they voted against the government. they'd been warned of the consequences. he has one mp who supports the response they received. the government was clear that people who voted against the cabinet would have the whip withdrawn from them. i think that was the right policy. many who rebelled against the government, they are good people, i served in government with them, but they were told clearly that this was they were told clearly that this was the consequence of their actions and the consequence of their actions and the government delivered on that. yet another extraordinary evening in british politics. we can be certain there will be plenty more. and not certain at all of what's going to happen next. we are going to be looking at the front pages of tomorrow morning cosmic newspapers in a few moments
10:40 pm 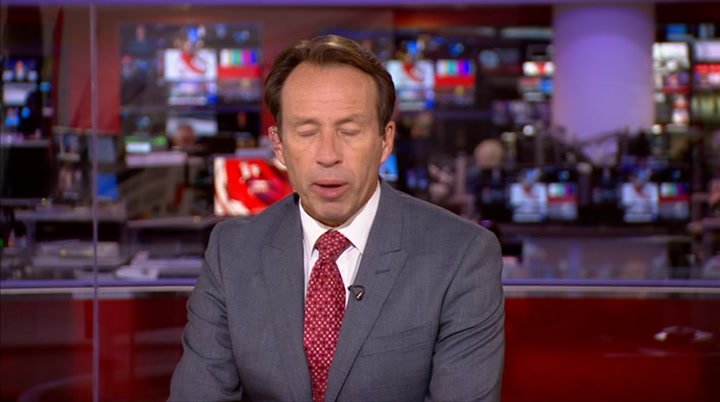 but firstly a reminder of what has been an historic day in parliament. borisjohnson been an historic day in parliament. boris johnson suffering been an historic day in parliament. borisjohnson suffering two major setbacks today for his brexit strategy. early this evening a cross— party strategy. early this evening a cross—party group of mps was successful in passing a bill to prevent a no—deal brexit. the bill is going to the house of lords and would force the prime minister to do something he has repeatedly ruled out, asking the eu for another brexit delay unless a deal is secured. the prime minister's response was to call for a general election with the date of october the 15th but he failed to get sufficient support for that when mps voted in the last hour or so. laura kuenssberg has his report. the prime minister is demanding a new election but he says he doesn't wa nt
10:41 pm

new election but he says he doesn't want one. the other
left
right
email Borrow Program