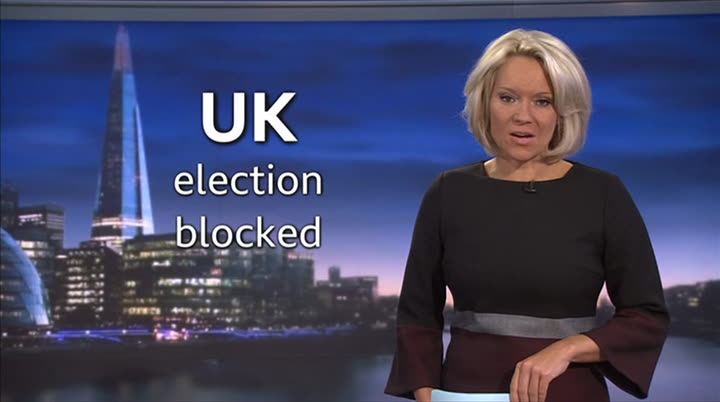 our top story: in britain, mps have again rejected government efforts to call a snap general election. it's the sixth defeat for the prime minister, borisjohnson, in little over a week. parliament is now set to be suspended for five weeks. authorities in the bahamas have defended their response to hurricane dorian. aid still hasn't reached tens of thousands in the worst—hit areas — and many bodies haven't been recovered. and this video is trending on bbc.com. the author margaret atwood has told the bbc that her best—selling book the handmaid's tale has got "a lot closer to reality" since she wrote it 30 years ago. the sequel, called the testaments, is due to be published on tuesday. that's all. stay with bbc world news.
1:31 am 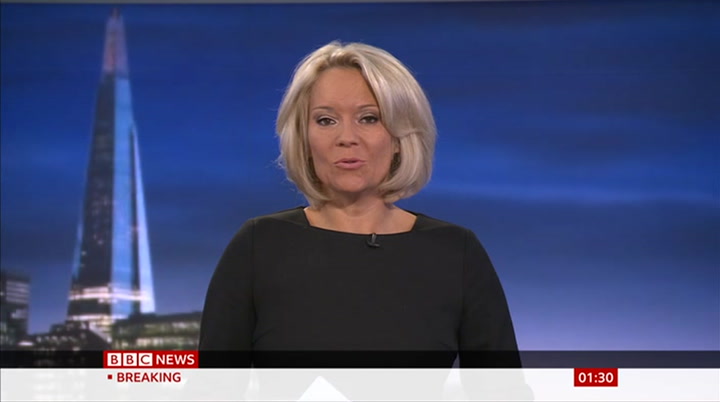 we have lots more of all of our stories on the website including what is taking place in the lords at the moment, the prorogation of parliament. we go to rico to get the business news. google competition pro. a group of 50 states and territories in the us launch an investigation into the search giant's dominance of online advertising. alibaba's search giant's dominance of online advertising. aliba ba's boss search giant's dominance of online advertising. alibaba's boss steps down from his role as executive chairman as he marks his 55th birthday. good morning, asia. hello, world. it isa good morning, asia. hello, world. it is a tuesday. glad you could join us for another exciting addition of asia business report. i am rico hizon. we start off with the world's biggest search engine. 50 groups and
1:32 am 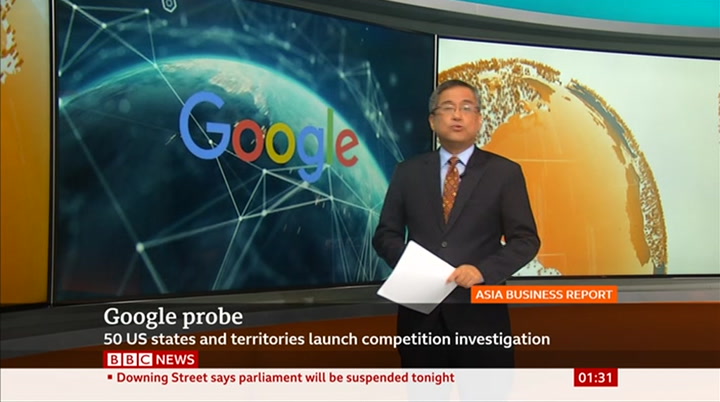 territories in the united states have launched an investigation into google‘s dominance of the online advertising market. a samira hussain reports from new york, there are a mounting number of probes of big technology giants by authorities in america. this is not something you see very often in washington, dc, democrats and republicans working together. but together they stood on the steps of the supreme court, announcing an investigation into the business practices of the business giant google. and well democrats and republicans may be from different parties we all have a common bond and that is we are charged with responsibility of protecting the citizens of our state. visa state officials are looking at google's search engine and is digital advertising and whether it has stifled competition by favouring its own size. this is not the only investigation to hit intact. last week another investigation of state officials found an anti—trust look
1:33 am 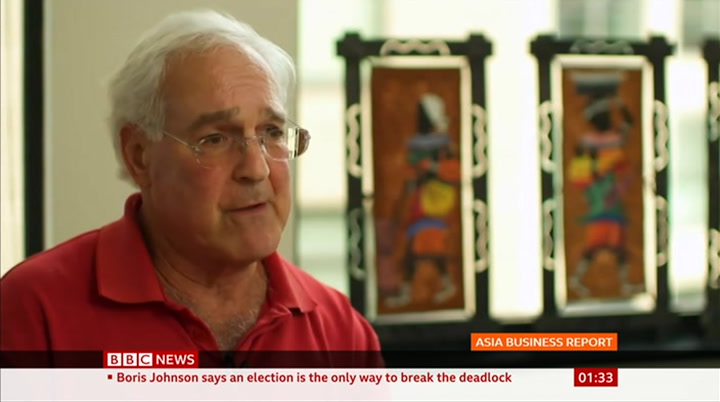 into facebook. we decided to probe whether social media, search, and e—commerce companies have become too big. in the federal trade commission continues to examine facebook. these investigations may take a year or even longer and at the end of all of that, the landscape of big tech may not end up looking any different. even with anti—trust enforcement, even with investigations, we still may have a few dominant firms stop and that will leave policy with another question does just do you regulate more in this space? do you come up with neutral stray digital market that actually expand opportunities for competition? i believe that is probably where we're headed. this all comes as consumers have confidence in tech companies. they have been unable to safeguard people's information and they have been caught up in our efforts by foreign powers to influence elections. so now it is up to big
1:34 am 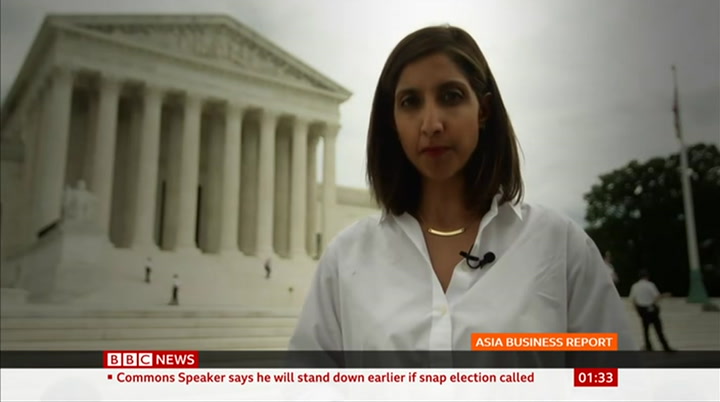 tech to prove lawmakers wrong. samira hussain, bbc news, washington. the troubled japanese carmaker nissan, the chief executive has said he will be stepping down next week stop shares are rising by on this news. he has been criticised for being overpaid as part of a bonus scheme. although he denies any wrongdoing. the company has been embroiled in a scandal since its former boss was arrested late last year and charged over alleged financial misconduct. the latest announcement followed a meeting of the carmakers' for some time he has expressed his strongest desire to pass the baton to the next generation. under the current circumstances board has decided his resignation to take place as soon as possible. translation: took a lot of time but the in—house investigation has finished. this is a big step to go to the next phase. i intended to
1:35 am 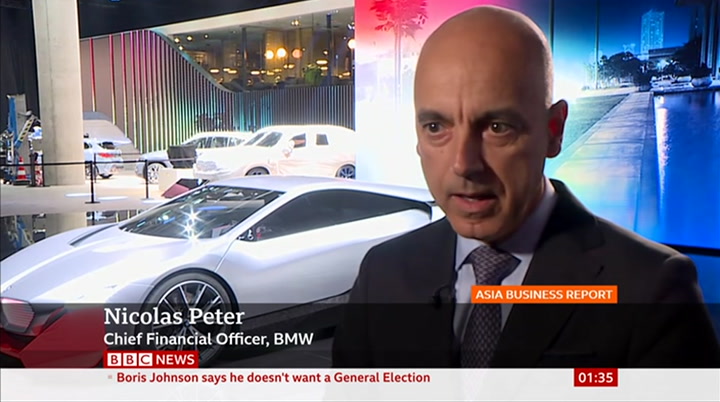 solve all those problems before handing over the leadership. so a regret that i haven't been able to do so. turning now to brexit and bmw's phone as the bbc that workers at its facility in the uk could see their shifts cut in the event of a no deal exit from the european union. nicolas peifer was speaking ahead of the opening of the frankfurt motor show in germany. definitely we are, if you look, probably more exposed than other manufacturers. having said this, this is what is making me optimistic, the most flexible production network in the industry, so we can production network in the industry, so we can shift from one plant to another plant and, therefore, thanks to this we are probably better prepared regarding trade tensions. as we speak we are on the one hand
1:36 am 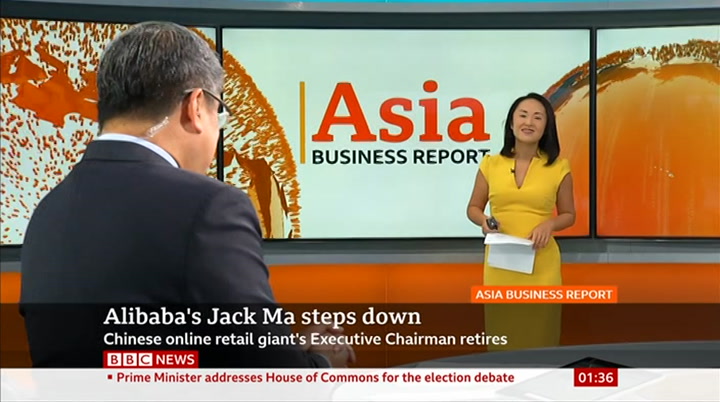 side continuing to invest in our production in south carolina in the us and on the other hand side to further expand our production network in china and, at the same time, investing in additional production capacity. jack ma, one of the best—known and richest businessmen in china is stepping down from his post as the executive chairman of eilidh barbour. the announcement last year took many by surprise. —— alibaba. joining me to talk about this is mariko oi. is this a bit they present for himself? so young to be stepping down at 55 yea rs so young to be stepping down at 55 years old. that is right. he turns 55 today and that is when he will be retiring. he will hand over the rain to danieljohn, the current chief executive of the country. you might be wondering why is he retiring at 55? but it seems he is following his
1:37 am 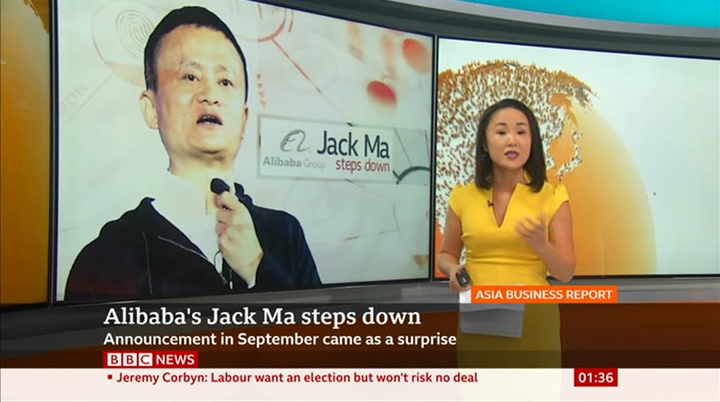 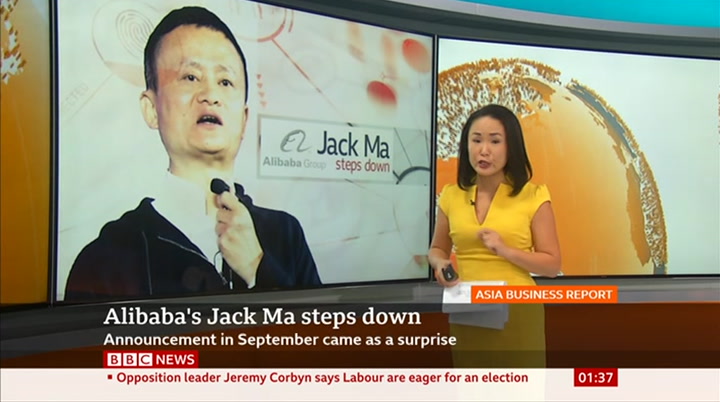 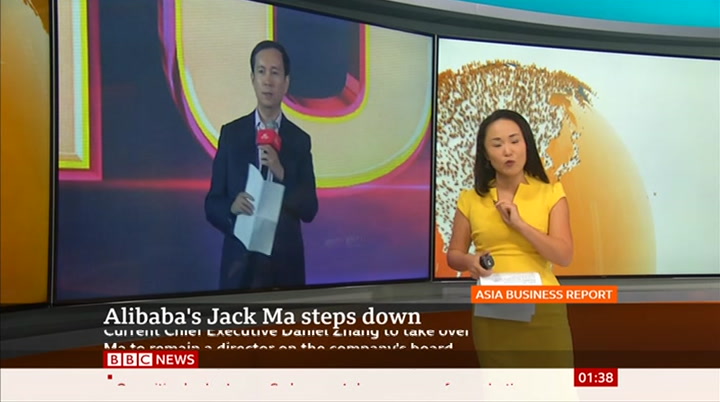 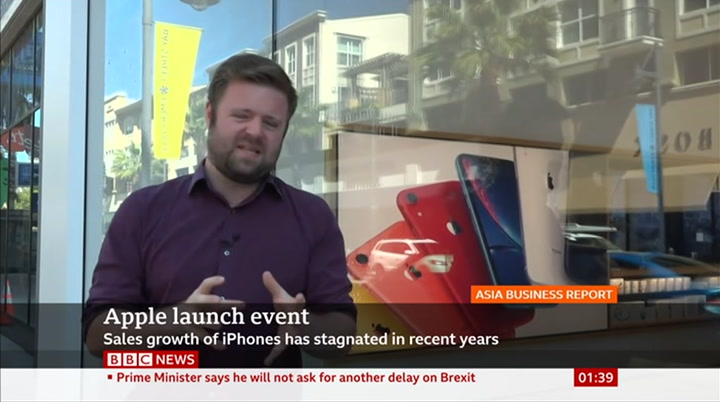 including its lucrative iphone. the question is, how is apple going to handle it? do they raise the price of their devices in a way that could, of course, is that their customers? do they swallow that cost, into their profit margins? investors are cost, into their profit margins? investors a re not cost, into their profit margins? investors are not going to be happy about that. they could move production elsewhere, outside of china, but that would reduce their ability to make so many devices so quickly. apple will hope that this event is about good news, a better camera on the iphone, some new features on the apple watch, perhaps something completely new coming down the line. but never before in its history has apple been in so little control of the performance of its business. dave lee, bbc news, in silicon valley. before we go, here isa silicon valley. before we go, here is a recap of our lead story. a group of 50 states and territories in the united states have lost an investigation into google's dominance of the online advertising market. let's have a quick look at
1:41 am 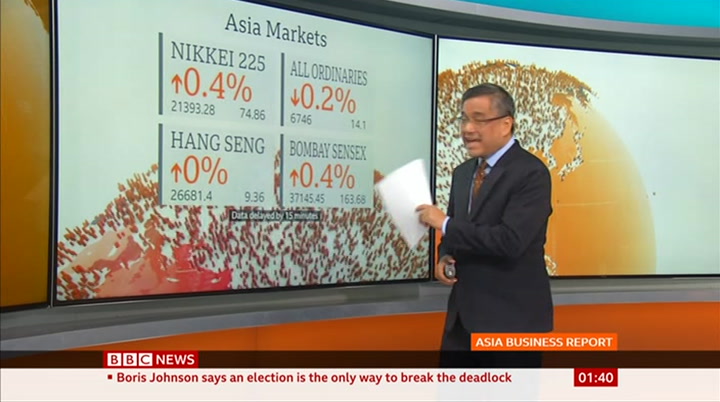 the markets. us stocks ended flat overnight is increased expectations of stimulus from central banks around the world were offset by losses in technology and healthcare shares. it was a mixed bag where you had the dow jones shares. it was a mixed bag where you had the dowjones up but the nasdaq and the s&p 500 in negative territory. the nikkei is up by two fifths of 1%. he also by a fifth of a percent. currently a mixed and lacklustre movement in the asian markets today. thank you so much for investing your time with us. i'm rico hizon. sport today is coming up next. the top stories this hour: two former cricketers have been knighted in theresa may's resignation honours list. a second
1:42 am 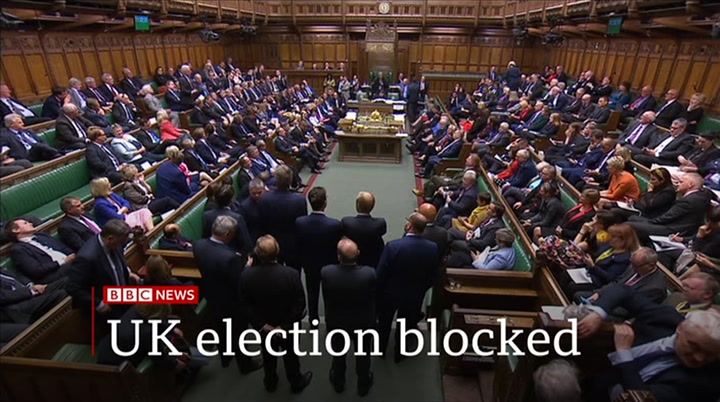 john bercow‘s supporters saw him as defender of the commons, champion of mps, though he sometimes put them in their place. i don't require any comment or signalling from the honourable gentleman. i'm giving a ruling. the honourable gentleman will listen to it and he can like it or lump it. be quiet. if you can't be quiet, get out. you're adding nothing. you're subtracting a lot. it's rude, it's stupid, it's pompous, and it needs to stop. hosting world leaders goes with thejob. the chinese leader was welcome but not donald trump. i would not wish to issue an invitation to president trump. controversy dogged his footsteps. a report suggested he'd failed to tackle bullying of staff at westminster. he had to deny bullying his own staff and one minister claimed he called her stupid and challenged him. when an opposition member found that you had called me a stupid woman, you did not apologise in this chamber. no...
1:44 am 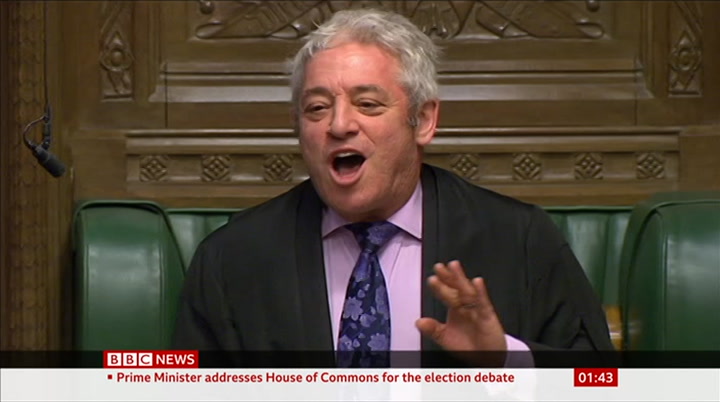 once, he was a devout tory. we are, in so many ways... but in high office as speaker, falling out with tory prime ministers became a habit. quite a career, from fiery young conservative... if that means shifting many state services and industries to the private sector, so be it. lots of people are annoyed at this decision. what would you reply to that? ..to man in the news for defying a tory government. i wish you a good day. and he'll likely make another headline or two before he's done. john pienaar, bbc news, westminster. hello, i'm tulsen tollet and this is sport today, live from the bbc sport centre. coming up on this programme: germany take all three points against northern ireland to move top of group c in euro 2020 qualifying. great britain's reece dunn sets one of five world records on day one of the world para swimming championships in london.
1:45 am 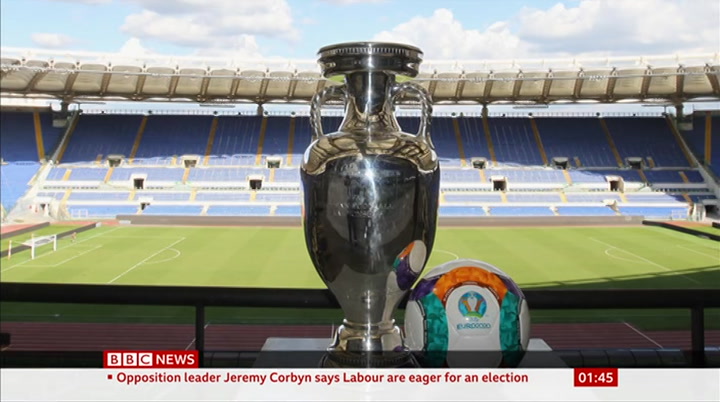 and holders new zealand arrive in japan ahead of the rugby world cup, getting underway next week. hello and welcome to the programme, where we start with footballing news from monday's euro 2020 qualifiers with germany moving top of group c after a 2—0 win over northern ireland in belfast. that result takes germany above their opponents to the top of the group on goal difference. while the netherlands are nowjust three points adrift of those two with a match in hand after easing to victory over estonia. elsewhere, world cup finalists croatia remain top of group e despite a 1—1 draw in azerbaijan. benjamin verbic scored a stoppage time winner for serbia to beat israel 3—2 and see his side move second in group g. belgium made it six wins from six played in group i after a thumping 4—0 win over scotland in glasgow. after a second loss to the netherlands in this campaign,
left
right
disc Borrow a DVD of this show DVD
tv