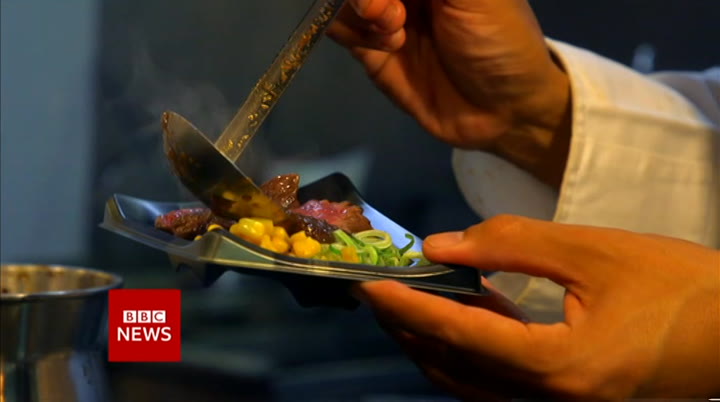 hello, this is bbc news. the headlines... david cameron accuses borisjohnson of only backing leave in order to further his own political career. the liberal democrats pledge to cancel brexit, if they come to power at the next general election. if people put into government as a majority government the stop brexit party, then stopping brexit is exactly what people will get. the foreign secretary condemns the attacks on saudi oil sites, saying they're a reckless attempt to disrupt global supplies
7:31 pm

and damage regional security. police in hong kong fire tear gas and water cannon to disperse pro—democracy protesters. messages of support for former wales rugby captain gareth thomas, who has revealed he's hiv positive, saying he wants to help reduce the stigma around the condition. now on bbc news it's time for click. now on bbc news it's time for sportsday. hello and welcome along to sportsday on the bbc news channel. i'm adam wild. coming up on the programme... it came down to the final hole, but europe win the solheim cup in a thrilling finish at gleneagles. after a long summer
7:32 pm 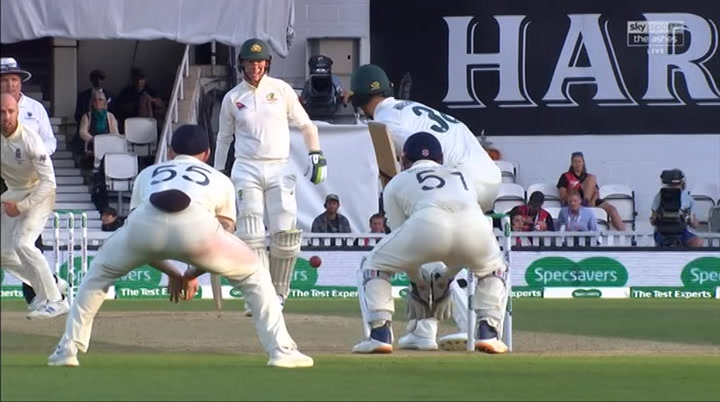 of exhilirating cricket, england win the final ashes test to draw the series with australia. watford fight back from 2—0 down against arsenal in the premier league. also coming up in the programme... we'll reflect on that las vegas victory for tyson fury. a win, but at what cost? hello, good evening and welcome to sportsday, i'm adam wild. we're going to start at gleneagles, where it's been a day of high drama in the solheim cup. the lead changing hands between europe and the usa time and time again. it all ended on the 18th green,
7:33 pm 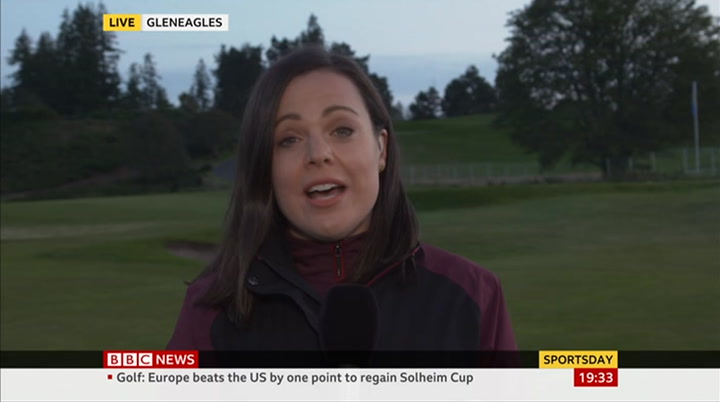 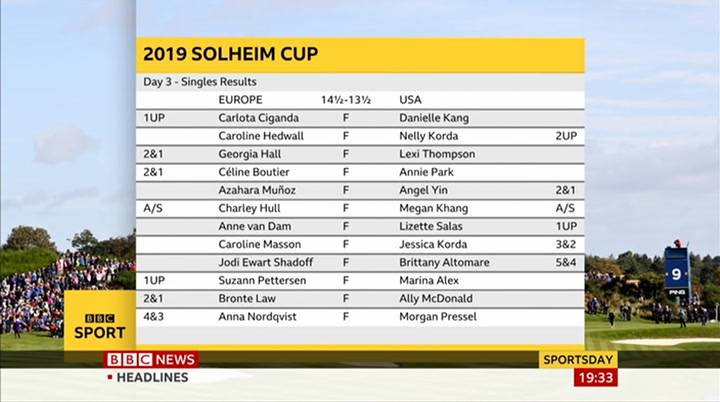 matchwinners, nelly korda and jessica korda, winning their matches later on in the afternoon. and then it really came down to that dramatic finish, the final hole, with the final putt, and it was the wildcard suzann pettersen who held her nerve. she has been out of the sport essentially for the last two years, winning it in a most dramatic fashion for europe. a brilliant, remarkable day here at gleneagles, michael redford has the details for you. the roar of a champion. this was the moment team europe snatched the solheim cup back from the jaws of defeat. a moment that nobody saw coming, a show a fight and fea rlessness coming, a show a fight and fearlessness and four—and—a—half points for europe in the afternoon meant they had one hand on the trophy at gleneagles. europe now had to win theirfinal three trophy at gleneagles. europe now had to win their final three matches, a task surely too hard. maybe not.
7:35 pm 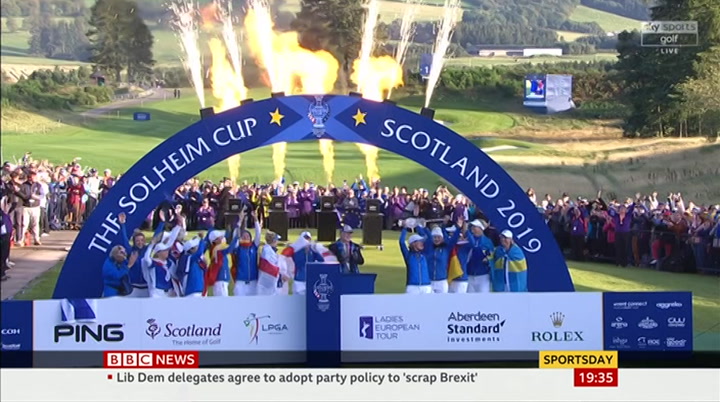 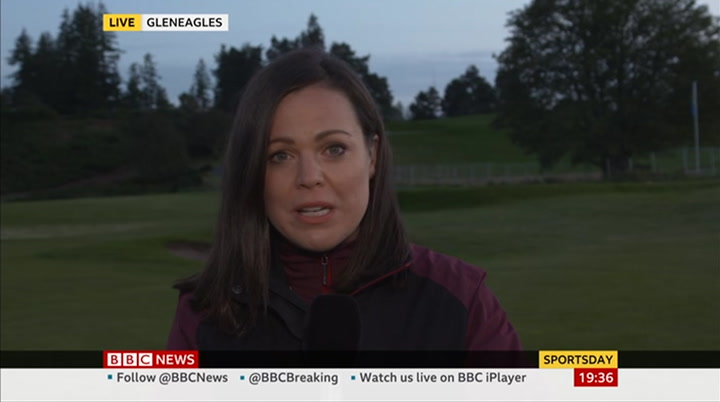 a wonderful win for scotland's catriona matthew. she had said that if she won here, it would be even bigger than when she won a major in her professional career. a word, though, on some news which has emerged about suzann pettersen, in the press conference following the win, she has announced that she is retiring from professional golf. you have to look at her legacy, notjust the win today, this was her ninth solheim cup appearance, she is a 38—year—old from norway, has been a vetera n 38—year—old from norway, has been a veteran of the game, a real big time player, two—time major winner, but she says that this is the way she wa nts to she says that this is the way she wants to go out of the sport of professional golf, so suddenly, all the questions emerge as to when she might potentially lead europe in a solheim cup. . quite a moment to bow out. sarah, thank you very much indeed. away from gleneagles,
7:37 pm 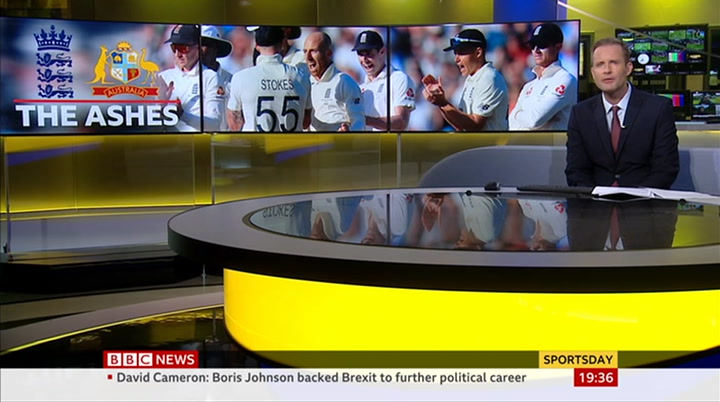 england have won the fifth and final ashes test at the oval to level the series at 2—2. england were dismissed in their second innings early on the fourth day. leaving australia chasing a target of 399. despite matthew wade's second century of the series, england completed a 135—run victory, with jack leach and stuart broad each taking four wickets. our sports correspondent joe wilson was watching. one red ball and 11 batsmen dressed in white, england's plan for sunday ran something like this. exactly like this. one down, harris. second to fall, warner. broad was bristling. now for some subtlety. jack leach lured marnus labuschagne forward and in a split second he was out, stumped, a high skilled dismissal, thanks. next. this is where all the greats have batted, and now steve smith would play his final innings of the summer. it could last minutes, hours, days?
7:38 pm 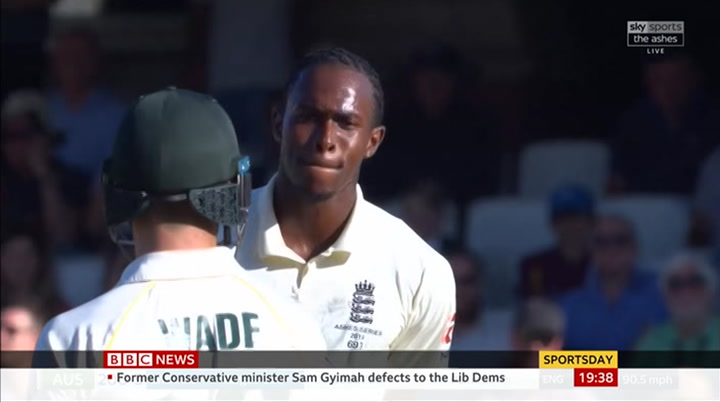 bowl it somewhere where smith can hit it, but put a fielder there. ben stokes grabbed the catch, and it felt like the match. just 23 for smith today but there was one nice surprise still waiting. he was applauded off the field. what could england's captain do? well, bowl. mitchell marsh fell tojoe root but matthew wade was defying england. hot afternoon, temperature rising at his contest withjofra archer was suddenly frozen in time. anyone blinking? no. on 117, wade fell, not to pace, but to guile, to root, bairstow‘s stumping. the final moment was also the captain's — root‘s catch for the match. the ashes remain in australia's hands but the series is level and england's long summer ends with another smile. joe wilson, bbc news, the oval.
7:39 pm 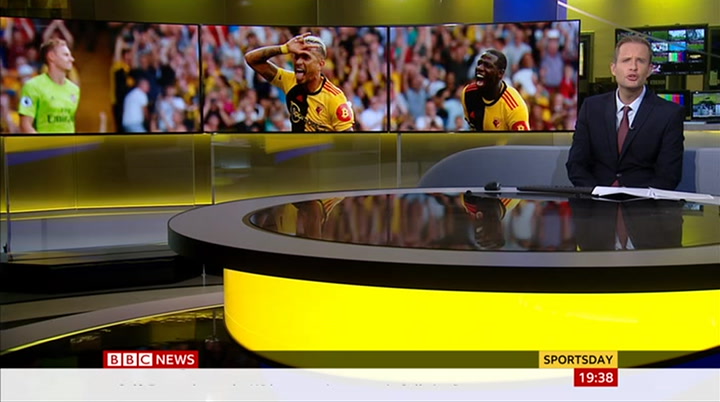 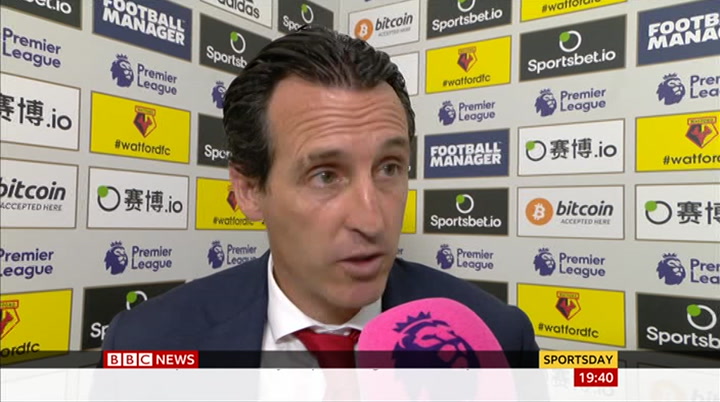 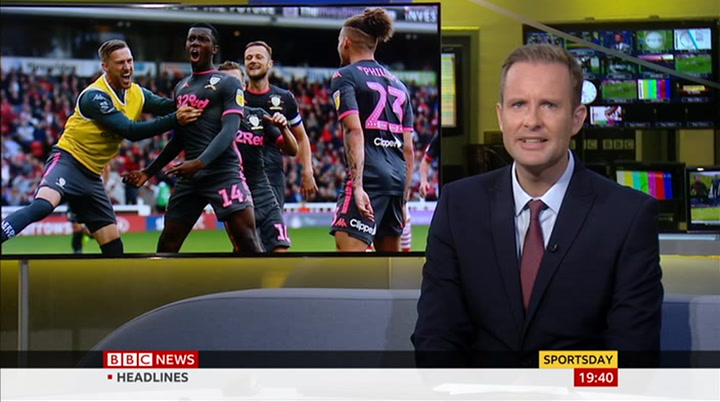 after two late goals helped them beat barnsley 2—0. in the other yorkshire derby that took place today, sheffield wednesday are up to ninth after beating huddersfield by the same score. steven fletcher putting wednesday ahead. sam winnell sealed the victory — that's his first goal in over two years. a win then for new manager garry monk in his first game in charge — but defeat for huddersfield — means their new boss danny cowley doesn't get off to the start he would have hoped for. in the women's super league, everton continued their 100% start to the season with a 2—0 victory over bristol city. manchester city are also two wins from two. they saw off reading this afternoon, thanks to a couple of goals from pauline bremer. that was her first, an excellent finish. 2—0 it finished. newly promoted tottenham scored their first goal in the top flight, rachel furness with the only goal of the game to beat liverpool 1—0.
7:42 pm 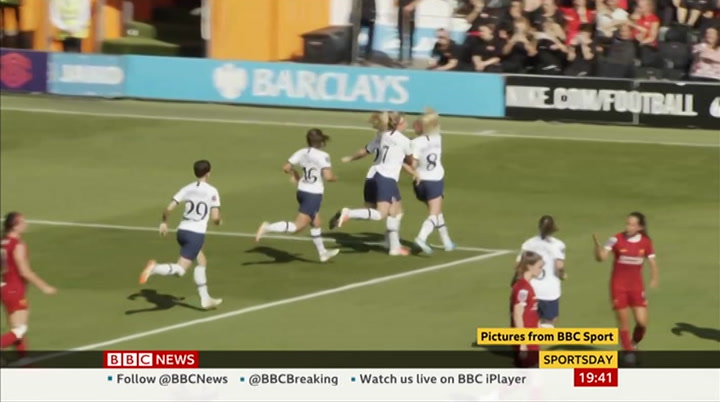 a quick look at the other wsl results from this afternoon. brighton and chelsea drew 1—1, whilst there was a first win of the season for west ham, they defeated birmingham 1—0. motogp world champion marc marquez has won the san marino grand prix. marquez left it late, overtaking leader fabio quartar—aro marquez left it late, overtaking leader fabio quartararo on the final lap to deny the rookie a madien win. the victory leaves marquez with a 93—point lead in the championship. britain's cal crutchlow crashed out and didn't finish the race. tyson fury‘s potential rematch with deontay wilder may be delayed after he suffered a serious cut in his win overnight in las vegas. he overcame the injury to beat swedish heavyweight otto wallin on points. fury had to fight on for more than nine rounds without being able to see out of his right eye. the cut needed constant attention from both his trainer and the doctor throughout. they were really struggling to stem the blood.
7:43 pm 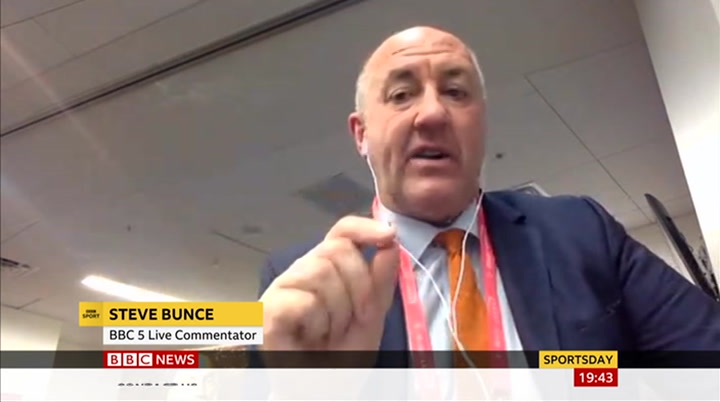 it took some real courage from fury because had the fight been brought to an end because of the cut, he would have lost his unbeaten record. and sensing he might need a knockout, the british fighter rallied in the later stages. eventually, fury was awarded the victory by unanimous decision, but went straight to hospital to have microsurgery on two cuts. they were two of the worst cuts i've ever seen in a fight where the guy has gone, one, two, three, four, five, six, seven, eight, nine rounds, nine rounds, with these wounds, with these gaping gashes. quite extraordinary. tyson fury never panicked once. he did dab relentlessly and repeatedly at the eye, but he didn't panic, and that is just as well, because the young swede, otto wallin, as they say, we have loads
7:44 pm

of cliches in boxing, in fact the entire business is based around cliches, as they say, he came to fight, and he went down swinging. so, tyson had to dig deep and he had to go back to the corner, try and be calm during the 60—odd seconds as the cuts were healed momentarily for the next round. there was no panic, but it was really tough throughout. ronnie o'sullivan has won the shanghai masters for the third consecutive year. the rocket came through a thrilling final against shaun murphy, eventually winning by 11 frames to nine. he takes home the £200,000 winners cheque in what was his first tournament since his shock defeat at the world championships back in april. that's all from sportsday. we'll have more here on the bbc news channel throughout the evening. now it is time for click.
7:45 pm 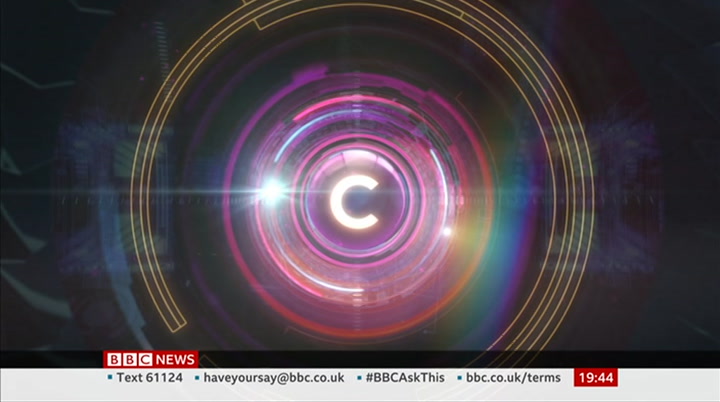 for the last four months, protesters have been rallying in hong kong. first, against a proposed bill that would have allowed the extradition of hong kong residents to the chinese mainland to face criminal trials. that bill has now been withdrawn, but protesters remain on the streets, asking for more demands to be met, including greater democratic freedoms and an inquiry into alleged police brutality. the protests have been watched around the world,
left
right
disc Borrow
a DVD of this
show
DVD
favorite