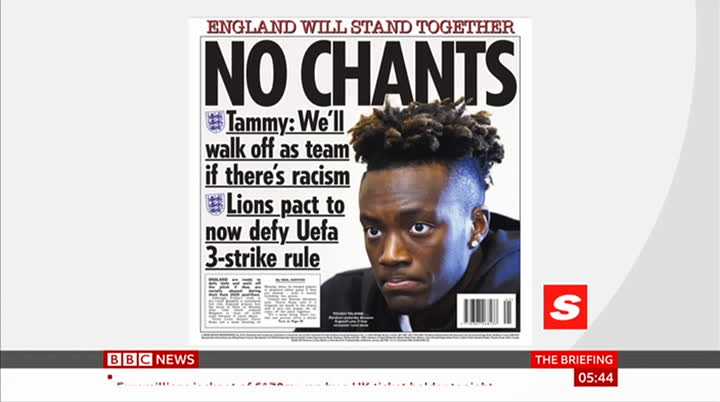 this is the sun's take on england's footballers, saying they'll walk off the pitch if there's any racism directed towards them in their european qualifiers. and finally, here's one from the bbc news websit. the latest euromillions jackpot has been won in the uk. everybody is talking about this. who has this ticket? it is actually slightly more than that. at £170 million, it's the country's biggest and could make the lucky ticketholder richer than these stars. with me is alpesh patel, chief executive of the investment management company praefinium partners. even richer than you. i wasted my time working. i should have spent all my time filling in lottery ticket. i don't know whether you are wasting your time or not. start with die welt and the guardian, two
5:46 am 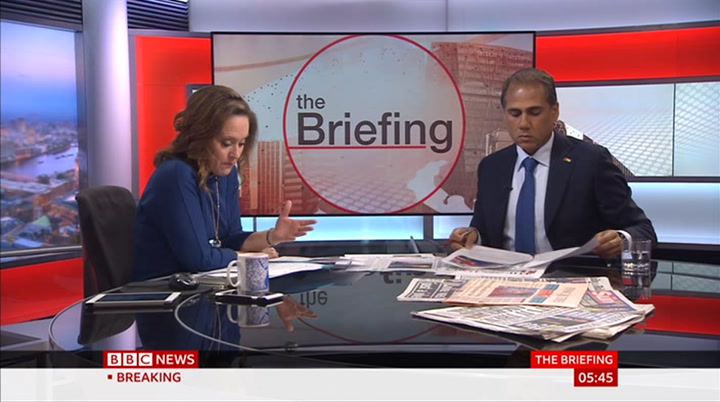 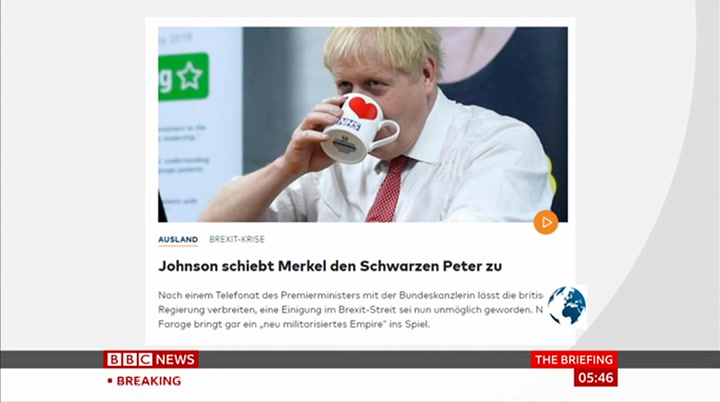 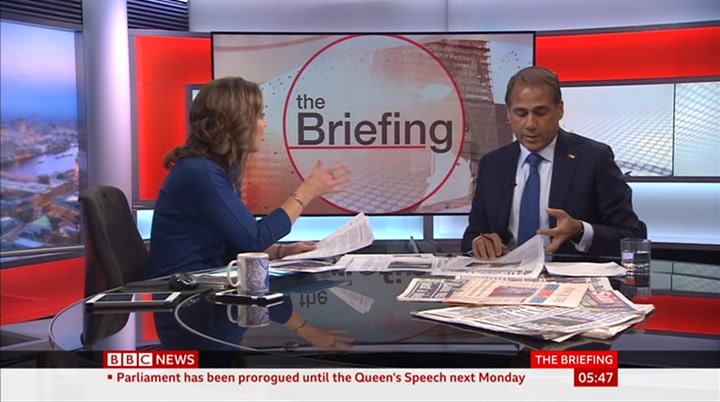 you are not focusing on the silly politics, you are trying to focus on trying to get through this and for your clients delivering a good service in the midst of it all. die welt says as far as they are concerned there is no new german or eu position on brexit, a deal based on borisjohnson‘s latest proposals is unrealistic by the end of october. that is a quote from the chairman under merkel‘s party. the guardian however talks about downing street saying that she said this is effectively dead. and you have summed it up. he said, she said. exactly! it is a divorce and it is what happens and that is why how they go. you try and take sides between your friends, do end they go. you try and take sides between yourfriends, do end up doing? you turn it off. we do not wa nt doing? you turn it off. we do not want donald to success. ——we do know what donald tusk says. he talks very
5:49 am 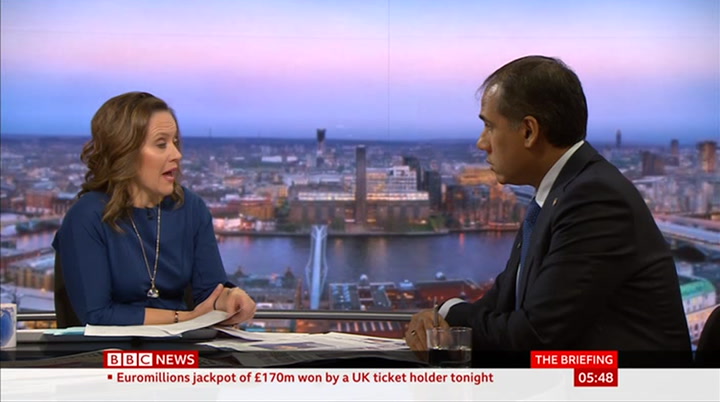 clearly about his frustration at the anonymous briefings over the merkel call, saying it is improbable, this is what came out earlier,... everyone is angry and frustrated. we have both sides of the atlantic, tusk, where are you going, the big question and quit pro quo regarding the impeachment. there is some incredible parallelism between the leaders of the uk. the guardian, the eu may now offer an extension to the end ofjune because they feel that isa end ofjune because they feel that is a more realistic time... doesn't that send a shiver down your spine? i tell you how it makes me feel. hopefully i speak for the millions of viewers. it is a bit like somebody told you before your exams you can take them nextjune. out of them would be thinking, i want to get them over and done with but part of you things, great, i have more
5:50 am 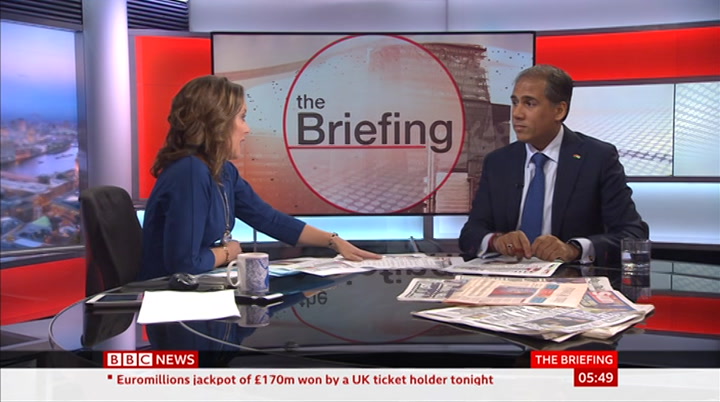 time, ican of you things, great, i have more time, i can put my feet up and relax, don't need to wait until next june. that is how i am divided from a business perspective. if there is a business perspective. if there is a general election prior to an extinction ending, that would be an issue — the extension. extinction ending, that would be an issue - the extension. i have run out of crystal balls. me too. let's move on. let's look at the times. this is a story that i have to say i have heard a lot about this, had this a lot at the bbc, we talked to terms of sexual harassment and some of the top universities in the uk, cambridge, bristol, other universities. i am shocked, i am shocked to be reading these stories are now today on the front page of the time the document two—thirds of universities are teaching sexual consent classes. yes, it is a bit like with sexism and this kind of stuff is a bit like racism just because you went to university doesn't mean you are less likely to be racist or sexist. your behaviour will be better. it just
5:51 am 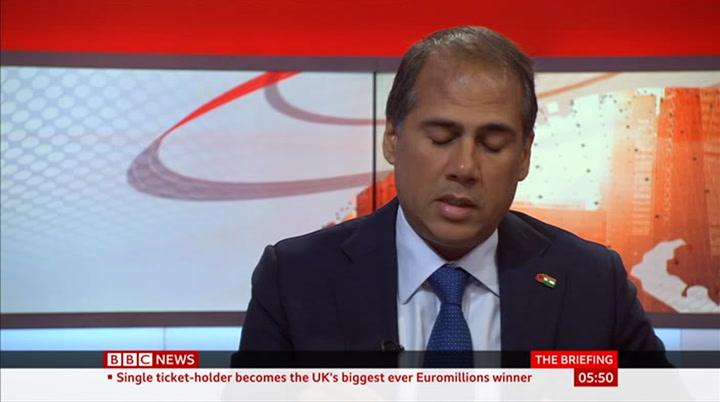 be racist or sexist. your behaviour will be better. itjust means you are an intelligent racist or an intelligent sexist if such a thing can exist. what is angry about this as you would have thought this is something she was... taught at home before they go to university. there is that, the parental thing. but this is something from the 60s or 70s or even 80s and 90s. not something which needs to be done today. i don't know to what extent we see on social media influences, what young people think they can get away with and is permissible. what annoys me, i used to be a governor at luton university and what used to trouble us on the board of governors was terrorism. we had quite a few bombers that had links to a university at the time and when resources a re university at the time and when resources are spent on these things which i don't need to be and should be spent on because it shouldn't even be a problem, it means things such as acting against terror speech, resources get diverted from
5:52 am 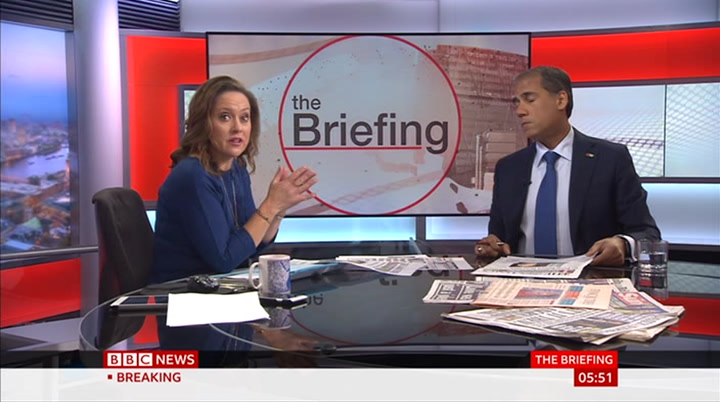 those kind of things of national significantly —— significance u nfortu nately. significantly —— significance unfortunately. they uncovered this at the top university in nigeria. you hear about in harvard. very high profile lecturers offering good grades... it is a shame it has to be offered, it is a shame is not educated is needed but it is clearly needed and it is good that it is offered and it is silly — like absolutely a travesty. if parents are watching, perhaps you can do yourjob a bit better before the kids get university place. the back page of the sun. no chance, we will walk off as a team if there is racism. a packed from england players. they say they are going on with zero tolerance. there is this uefa 3—step protocol routine that you are supposed to follow in these qualifiers for the european championships. your thoughts? this doesn't come off, so to the
5:53 am 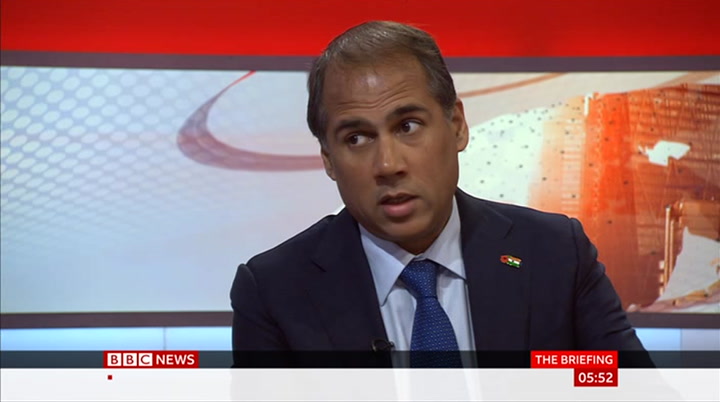 european, whether it is a check republic of montenegro, england have as an issue we have discussed before. if you don't like us being in europe and freely wandering around your countries, you go somewhere else, we're not going anywhere. we add more value to your continent they knew, the racists do. you go somewhere else. syria is a nice place for racist right now. apart from that personal appeal, what about his actual...|j apart from that personal appeal, what about his actual... i speak for the england football team. they were right to walk. only problem with walking a visit comes the other side will do it more, in which case get them some law enforcement. we have video cameras. get them arrested. stick them in prison because it is hate speech. if you £170 million or slightly more than that, with someone slightly more than that, with someone in the uk has, a single ticket holder, what would your advice be? how would you invest it? top tip. pretend you give it to your
5:54 am 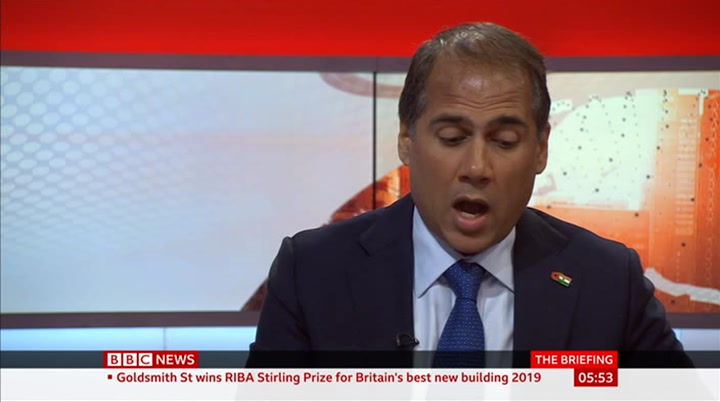 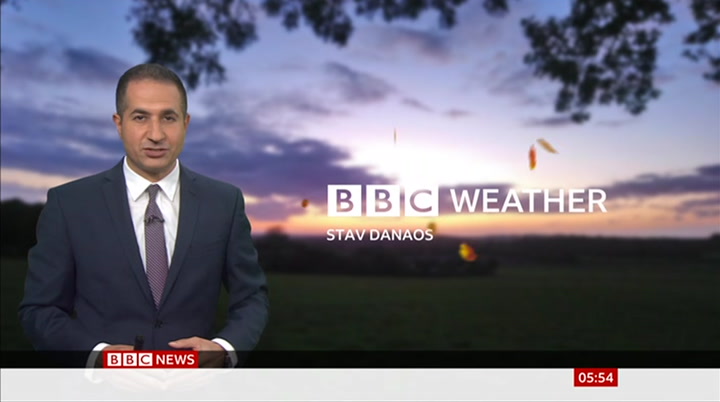 i was see you soon. goodbye. hello there. it was a fairly unsettled day on tuesday. we saw plenty of showers across northern and western areas. and a few got across into the east that were pretty heavy and thundering in one or two spots. but there was plenty of sunshine too. the next few days, similar story, staying rather unsettled with low pressure nearby, and it's going to be windy for most. on wednesday, low pressure again to the north of the uk. fairly strong winds, plenty of showers blowing from west to east. and then for thursday and friday, looks like we could see more organised weather fronts pushing in to bring more persistent rain for some areas. if you were watching yesterday, like i mentioned, it's not going to be particularly cold the next few days as our air source will be coming in off the atlantic from the west or the south—west. the night shouldn't be too cold either. for wednesday then, it starts off bright, some sunshine across eastern areas. we'll have a scattering of heavy, perhaps thundery showers affecting south wales, southern counties of england through the day, and lots of showers will be piling into western scotland. and the winds strong, particularly across the west and when the showers come along, gusting 30, maybe 40mph
5:56 am 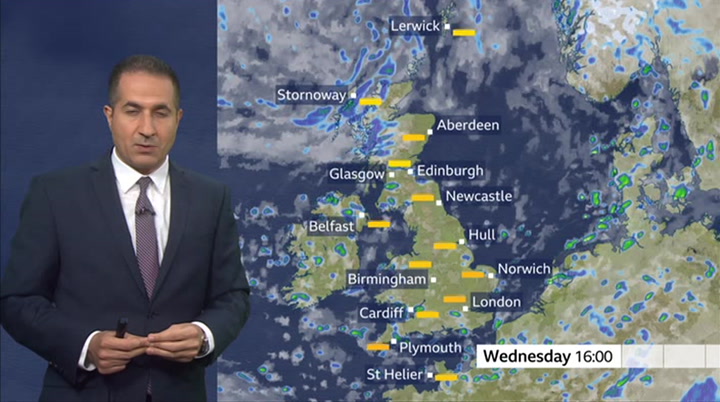 in exposed spots. temperature wise, a few degrees down on what we had on tuesday. that is the low teens across scotland, northern ireland, maybe 11! or 15 across the south and the east. now, through wednesday night, it stays blustery. lots of showers again across northern and western areas. some of them merging together to produce longer spells of rain here. but we could see some drier interludes or long clear spells across central and eastern part of the country. those temperatures dipping down from 7 to 10 degrees. so, on into thursday then, we've got low pressure to the north—east of the uk. next system pushing in with more active weather fronts could bring more persistent rain to parts of the country, like i mentioned. so i think we'll start off fairly cool, bright, plenty of sunshine around. to the west, thicker cloud and this front will bring more persistent rain to northern ireland and into scotland through the day but again, further south will be sunshine and showers, mainly across wales and the south—west of england. but a few spots will see some hazy sunshine. those temperatures back up again.
5:57 am 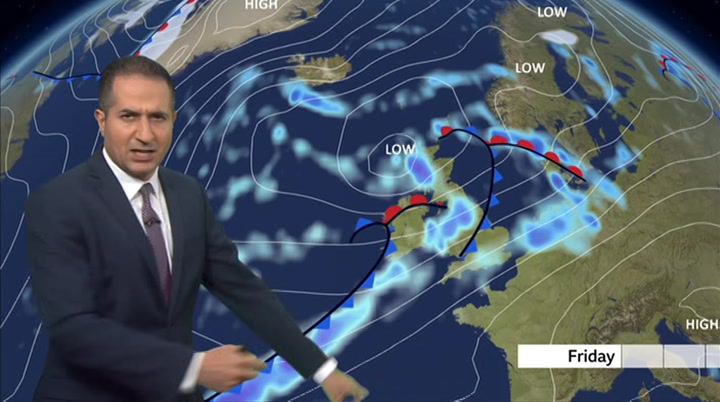 17 degrees will be the high. lots of weather fronts on the chart. you'll see on friday some uncertainty to where these fronts will actually be. it could be that warmer parts of the north—west of scotland to bring outbreaks of rain here. another one may move south—east across england and wales to bring a spell of persistent rain. some sunshine in between. those temperatures up a notch again, 17 or 18 degrees across the south and the east of the country. and it remains unsettled with low pressure always nearby into the weekend. showers or longer spells of rain, also a little bit of sunshine, but it will stay on the breezy side.
5:58 am 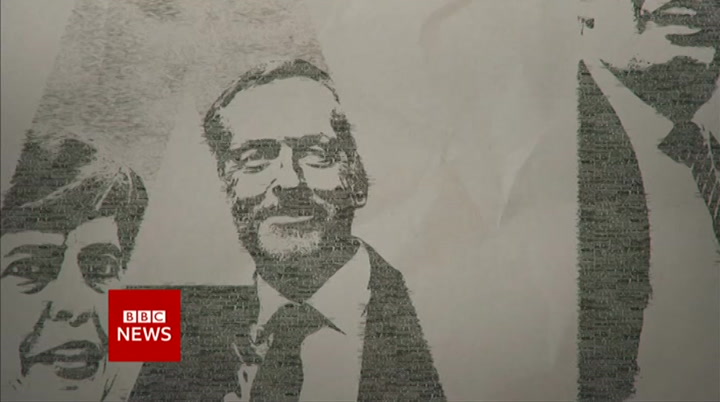 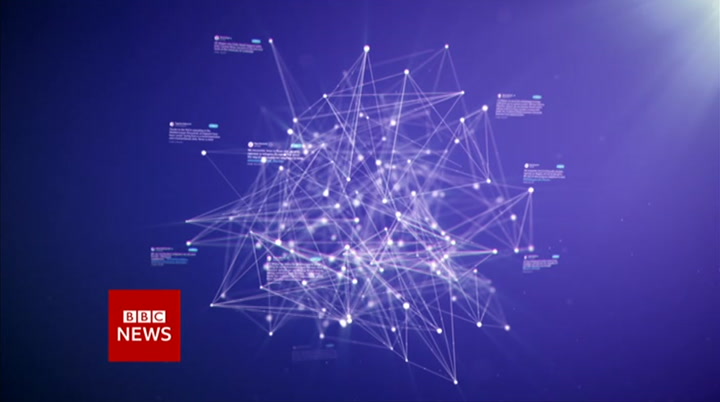 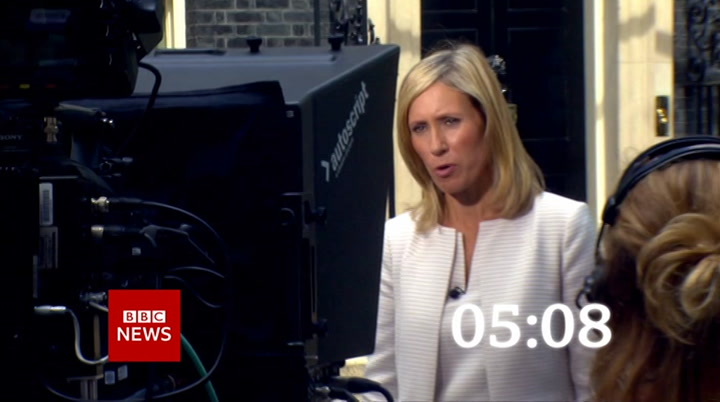 good morning. welcome to breakfast with dan walker and louise minchin. our headlines today: eight days away from next weeks crucial brexit summit, the irish president warns that a deal will be "very difficult" to reach. partisan and unconstitutional — the white house refuses to co—operate with the impeachment inquiry into president trump. after an horrific accident left herjaw hanging on byjust a tiny piece of skin, we'll speak to 15—year—old emily and the surgeon who rebuilt herface. the cost of going cashless. fewer bank branches and atm closures threaten the end of cash. i'll look at those struggling to access their money. it's a big day at the rugby world cup.
left
right
Borrow Program
tv