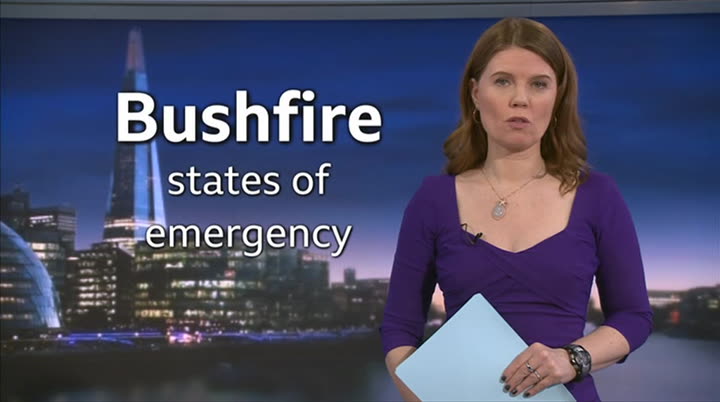 our top story: two australian states have declared emergencies to allow forced evacuations in the face of raging bushfires. dangerous weather conditions are expected to return at the weekend, raising the risk of new fires. the royal australian navy is beginning the evacuation of more than 800 people from the town of mallacoota in victoria, which has been almost encircled by wildfires. at least 26 people have died and tens of thousands have been evacuated in the indonesian capital jakarta after flooding following the most intense rainful in 2a years. and this video is trending on bbc.com. western norway is experiencing a rare heatwave at a time when temperatures normally stay well below freezing. record after record has fallen, with the highest temperature of 19 degrees, more than 25 above january's average.
1:31 am

more on our website, bbc.co.uk/news, and the news app. now on bbc news, live to singapore for asia business report. climate change and the economy. australia's prime minister is heckled for his response to the bushfire crisis. and interpol issues a red alert for the former nissen boss, carlos cohn. —— nissan. —— carlos ghon. iam sharanjit i am sharanjit leyl. we begin in australia because what is happening
1:32 am 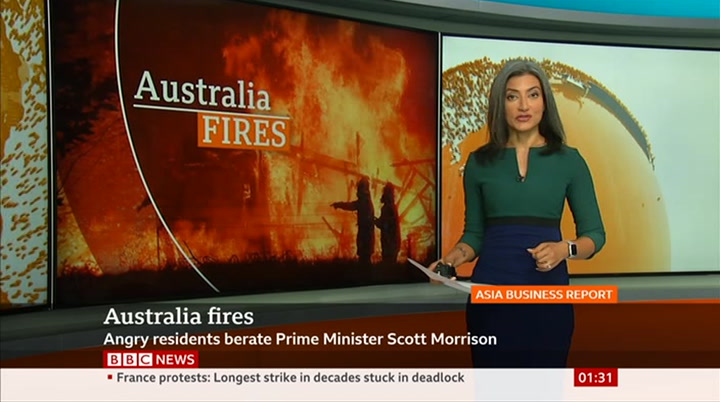 there is unprecedented. the bushfires have killed at least 18 people so far, they have killed close to half a billion animals and they are over twice as big as the amazon forest fires. they are exerting extreme political pressure on prime minister scott morrison. he has acknowledged the link of reducing emissions and reducing the risk of bushfire season such as this one but he argues australia is keeping at side of the bargain on climate change. here is more of what he had to say. what we will do is ensure that our policies remain sensible, but they don't move towards either extreme, and stay focused on what australians need for a vibrantand focused on what australians need for a vibrant and viable economy as well asa a vibrant and viable economy as well as a vibrant and sustainable environment. getting the balance right is what australia, i think, has always been able to achieve. but right now, the focus, as i set at the outset, is to fight these fires and to get people to safety. —— i said. but, well, there are actually
1:33 am 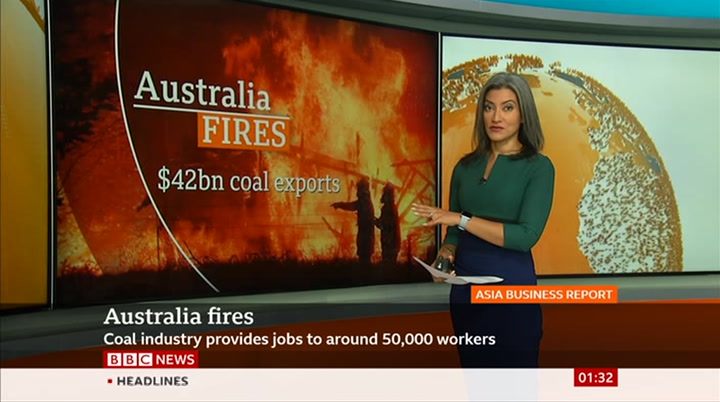 several buts. australia is the world's third largest exporter of fossil fuels, mostly coal. world's third largest exporter of fossilfuels, mostly coal. in 2018 australia exported some $112 billion worth of coal. but that also providesjobs to worth of coal. but that also provides jobs to around 50,000 workers in australia, and around 60% of australia's electricity comes from coal—fired power stations. we will continue to report on the story and you have heard lots about it on newsday. let's talk about this man, carlos ghosn. he is the former boss of nissan and he was facing charges injapan but he skipped bail and arrived in lebanon, which does not have an extradition treaty with japan. interpol have put up a red notice for carlos ghosn‘s arrest as a request for assistance, but interpol cannot force its members to comply, so perhaps not as significant as it first sounds. we
1:34 am 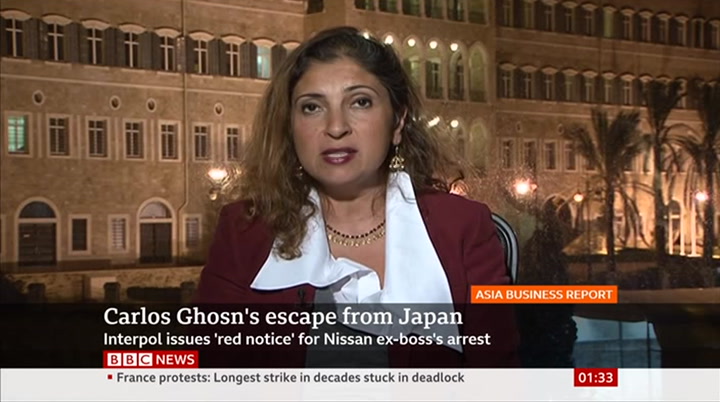 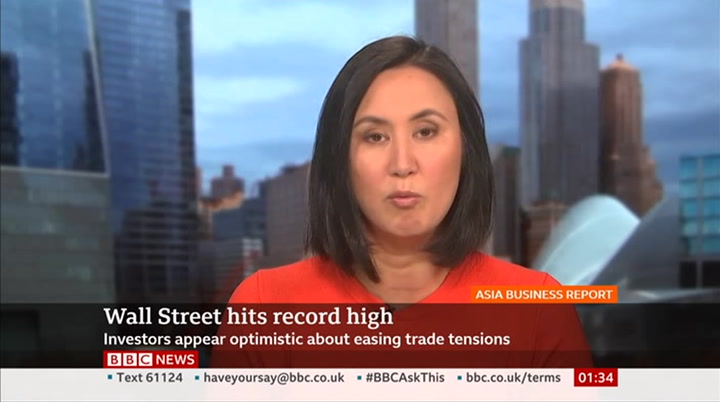 happen as a result of these negotiations. there was also a further set of tariffs that were rolled back or cut in half, from 15% to, well, they were essentially halved. however, there are some $200 billion worth of imports in china into the us, which still faces ta riffs of into the us, which still faces tariffs of 25%. the us still has some degree of leverage, but what you are seeing here is the difficult stuff that needs to be negotiated, in this phase to deal that donald trump alluded to in a tweet. the question is whether they can ever get there. it is a big ask. not injakarta, not in jakarta, when not injakarta, when more than 20 people have lost their lives and thousands of residents have relocated to temporary shelters. —— 110w relocated to temporary shelters. —— now to jakarta. the indonesian capital was experiencing its heaviest rainfall in over 20 years. the torrential rainfall is also triggering landslides, and the
1:36 am 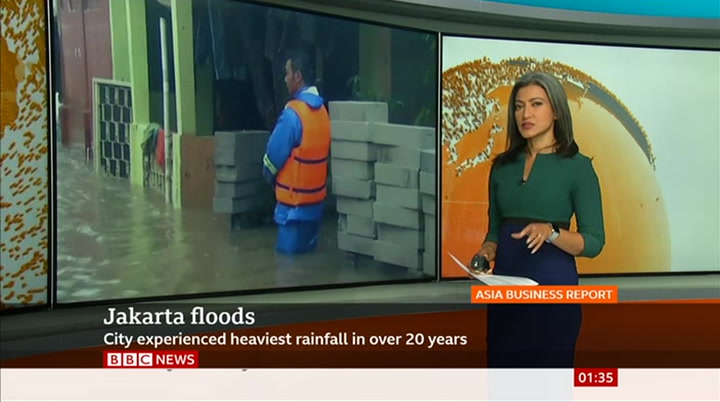 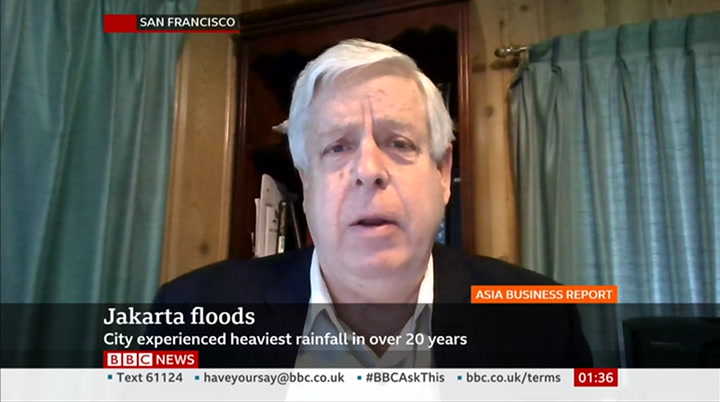 renegotiated. in the process they have trimmed down the size of those projects considerably. i think that will be an example of the type of friction that is going to be seen going forward that is really going to slow the projects. you talk about the frictions they have encountered, but we know the chinese economy is beginning to slow. just how crucial are these big projects to china's growth trajectory. well, it is part of its soft power aspirations. it is building up its hard power, its aircraft carrier and its military. it is also trying to use this belt and road programme to build ties with the number of countries in the world, its neighbours and further afield. it is not doing a project really good job. at the same time you have another side of the chinese society, the criminal elements, which are also moving into the same markets, often times pretending they are part of the belt and road. and some of these illegal movements of people are starting to be resented ina lot people are starting to be resented in a lot of countries, where crime
1:38 am 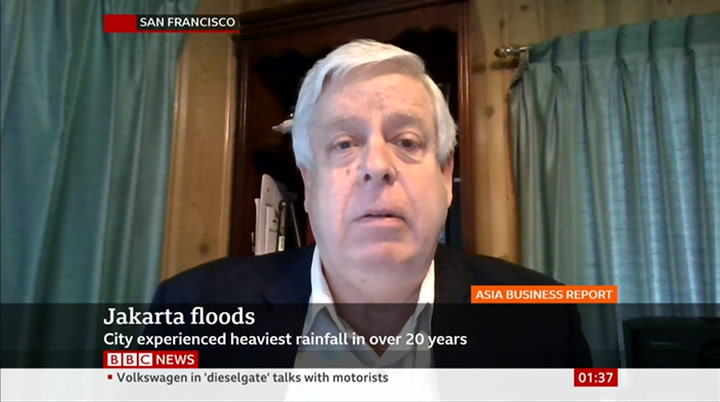 is rising because of them, they are getting into overheating property markets, so the downside of trying to be an economic power is china is starting to feel that in a big way. that was bob broadford. using road navigation systems, keeping time consistent around the world, and generating accurate stock exchange data. what do they all have in common? the answer, they all depend on working satellites. but an increasing amount of debris polluting space is posing a risk to all of those services. one japanese firm has been working on ways to clea n firm has been working on ways to clean up space junk. let's firm has been working on ways to clean up spacejunk. let's hearfrom them. debris in space has reached a critical level. a chain reaction of a collision could happen in any near future.
1:39 am 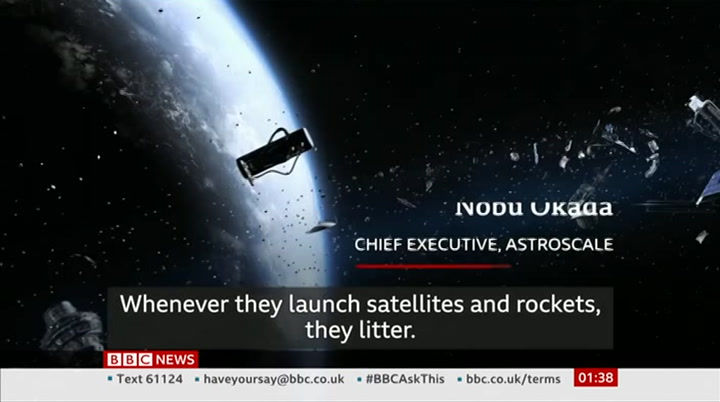 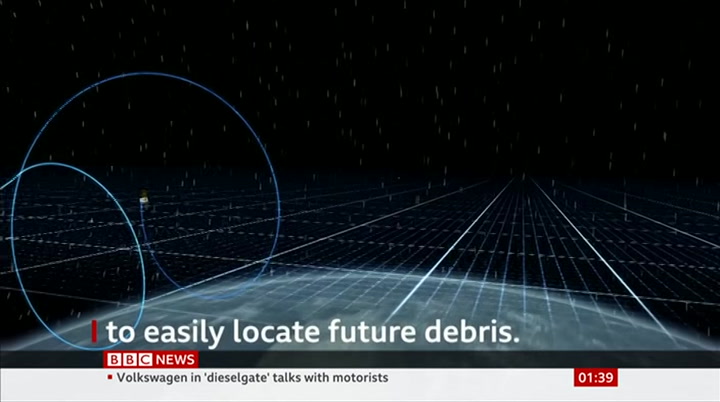 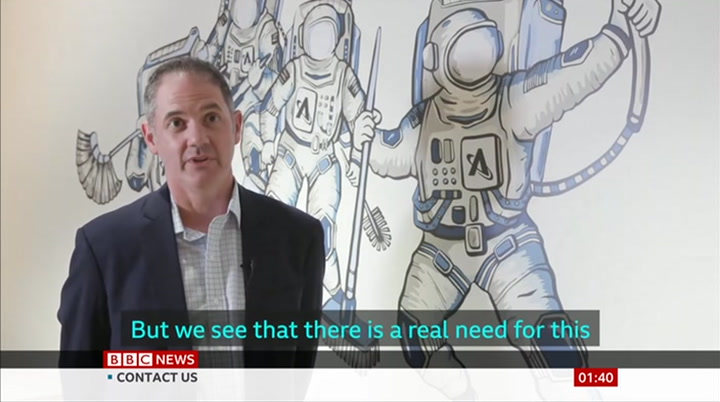 in australian history. emergency powers are in force in both victoria and neighbouring new south wales dozens of people have died and tens of thousands have been evacuated from buildings injakarta after the heaviest rain in a quarter of a century caused flooding and landslides. conservationists have declared a 5—year trial to re—introduce beavers to the river 0tter in devon a success, and it turns out it's good news for the environment too. the animals were hunted to extinction in the uk hundreds of years ago. the beavers play a part in protecting communities from floods because the way they build their nests can slow down rivers after heavy rains. jon kay has more. beavers are back. hunted to extinction 500 years ago, this mother, her kittens and up to 50 more are now thriving here in east devon. and here's the evidence. we've got a poplar tree here that's been felled probably over the last couple of days. professor richard brazier has been studying the impact of beavers. he says they may be known as furry vandals but the dams they build at night here
1:43 am 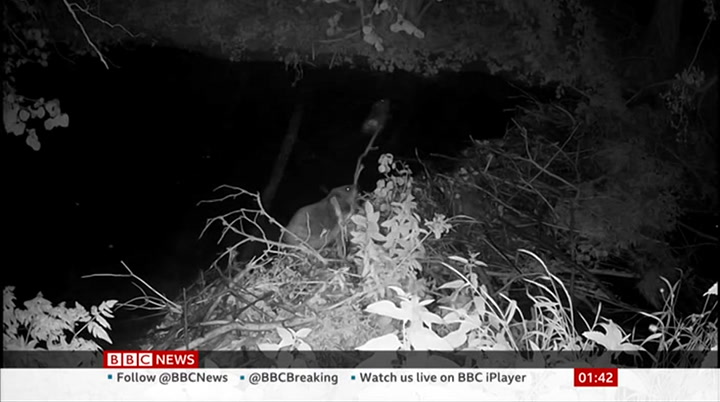 are actually a good thing, preventing flooding by slowing down the flow of water in winter and then retaining water during summer droughts. 0verall, you would say they are useful? they are very, very useful, and they do a job that we can't afford to do. we're actually not as well adapted as beavers to doing it. they are natural water resource managers. this has been a 5—year trial to see if beavers can live successfully in england alongside other wildlife and humans. a similar scheme in scotland has already led to them getting protected status, and now the review in devon has shown they can improve water quality and help other animals to thrive. but some farmers see the damage caused by large beaver populations in north america and worry things could get out of control in the uk. and sometimes it's been up sort of almost as far as here. in devon, the wildlife trust, who initiated this pilot scheme, has been clearing any
1:44 am 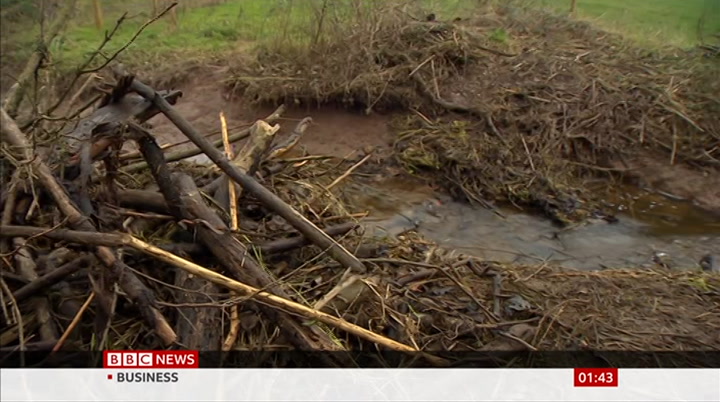 dams that cause problems. they say as long as that happens, local landowners should be satisfied. i hope this is providing some reassurance that actually this is quite effective. you know, we can manage conflicts that occur, as long as you've got people on the ground providing that advice and support when it's required. these findings will now be reviewed by the government. the national farmers' union says there must be a wider discussion before beavers are reintroduced across britain. jon kay, bbc news, devon. now on bbc news, sport today. as you may have seen, liverpool unbeaten in the premier league. that will be one of the stories on sport today. hello, this is sport today, live from the bbc sport centre.
1:45 am 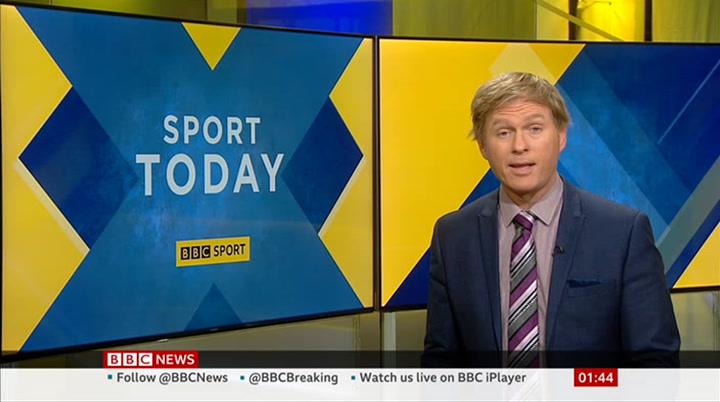 coming up on this programme: liverpool's unbeaten run in the premier league stretches into a second year. the atp cup is underway in australia, but does tennis need another team tournament? and is it the cursed tour? england's opening batsmen rory burns may think so after an injury playing football ends his series against south africa. hello there and welcome to the programme, where we start with the footballing news that it's now a year since liverpool were beaten in the premier league. the last team to get a win against them were the champions manchester city, but they look like they'll be handing their title over to them at the end of the season. jurgen klopp's side stretched their lead at the top back to 13 points with a 2—0 win over sheffield united. mohamad salah put them on their way after just four minutes, while his strike partner sadio mane doubled the advantage in the second half.
left
right
disc Borrow a DVD of this show DVD
tv