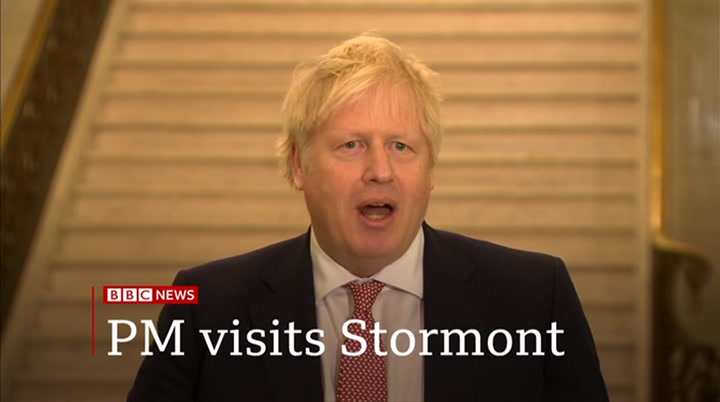 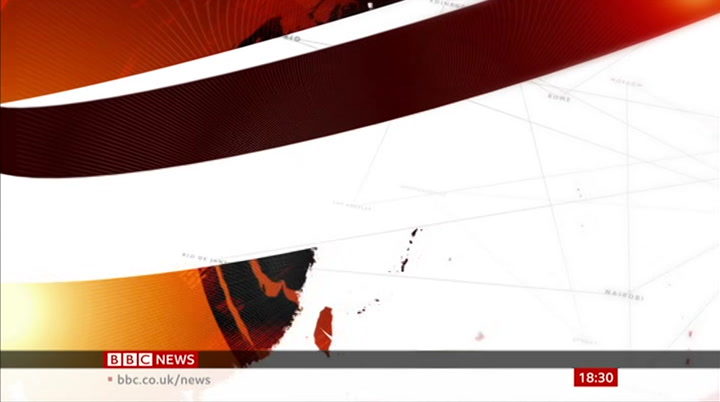 in a moment it will be time for sportsday but first a look at what else is coming up this evening on bbc. we will speak to a ship captain who has steered his ferry through some of the most of the storm. at 8pm we will be live in sandringham for the queens statement on prince harry and meghan. and later, we will be taking a look at tomorrow's and later, we will be taking a look at front pages in the papers — our geuests are dia chakravarty, brexit editor at the telegraph and lance price, political commentator and former labour party director labour party director of communications. now on bbc news it's time for sportsday. hello i'm olly foster. our top story tonight, what's going on at barcelona?
6:32 pm 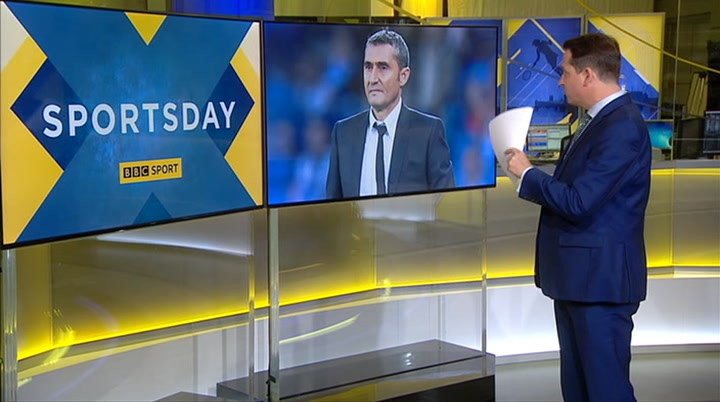 are the spanish champions and league leaders really going to get rid of ernesto valverde? has xavi really turned down chance to take over? and could mauricio pochettino be waiting in the wings? also coming up on sportsday tonight... happily ever after. james hook's retirement could see him pursue a career as a children's author? one win away from the superbowl, it's been a fantastic weekend in the nfl play—offs. and we hearfrom rob burrow after an emotional run—out for the leeds rhinos yesterday.
6:33 pm 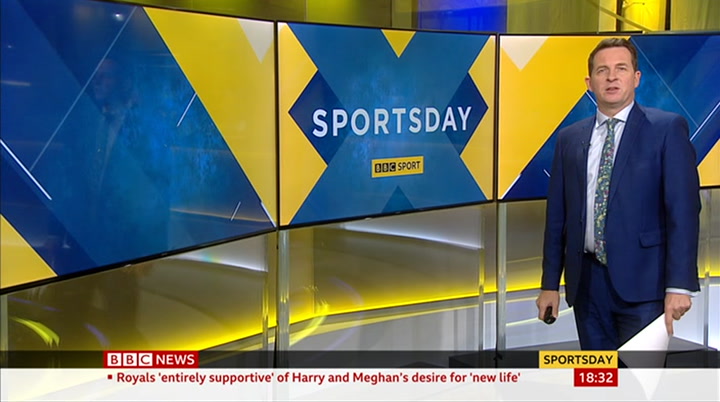 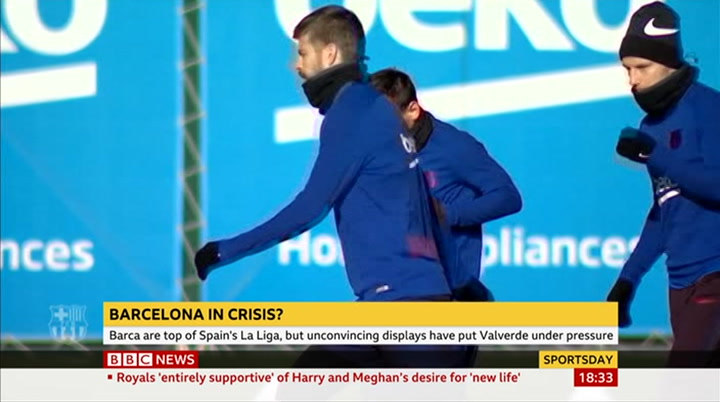 they discussed who will replace nso valverde. it is something they thought for a while, they contacted thierry henry in november, xavi said no right now and now we are between candidates including mauricio pochettino. had they've been courting xavi a former midfield star who had been in qatar at the moment? this is the ceo of the sporting director, because he is recovering. you have to believe them until we found that that actually they met, they offered xavi the opportunity to ta ke they offered xavi the opportunity to take over barcelona and he thought about it a lot but then decided not to. he has only been in thejob for five games in qatar, sorry, five months and i think he feels it is not the right time. he has asked
6:35 pm 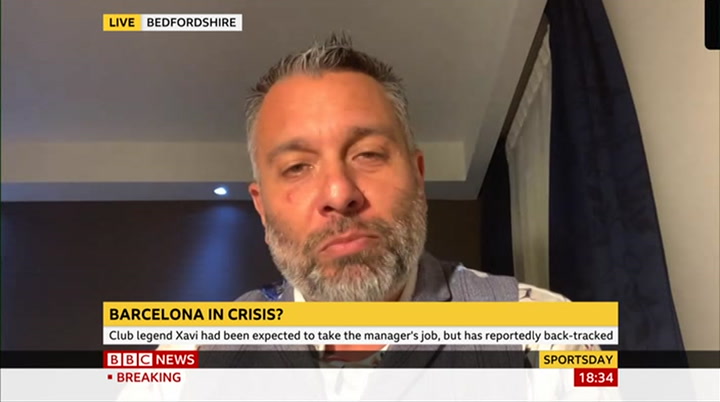 barcelona for total control of their positions fes tojoin barcelona in june and whoever takes over now, the offer could be until the end of the season. offer could be until the end of the season. once iraq ritzy pochettino was sacked by spurs a few months ago. he said once never because of his s manual connections were to go to barcelona. i think anyone would be tempted to go to barcelona including mauricio pochettino. if you go to the newspapers you would see a lot of those kind of declarations from him but you have to know that the chairman of barcelona is a great admirer of his, they have known each other for more than a decade, their kids used to go to the same school, they are friends and one of the members of the secretary used to work with pochettino. that is too big admirers and the long conversations in the board meeting and we don't know exactly what came out of that, had that battle, on one hand, why not,
6:36 pm 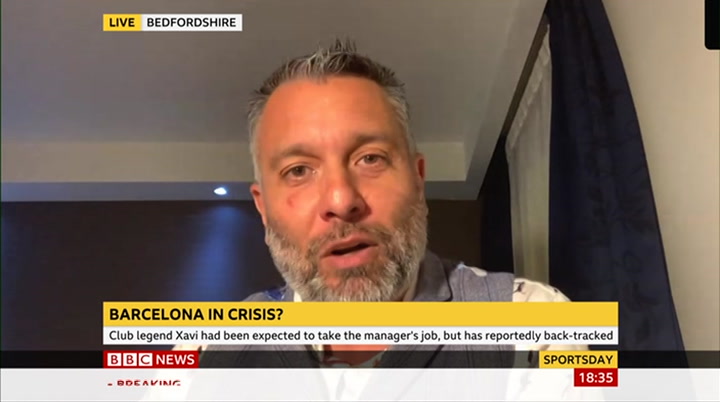 mauricio pochettino. wealthier with us, the spanish super cup held in saudi arabia, this professionalfoul in time to stop atletico madrid winning, real madrid won in penalties. has there been outrage because everyone has talking about it. that tackle. yes, the question as he was given man of the match. and he said maybe it was because of that foul because he stopped atletico madrid winning in normal time. of course we should not praise this too much but he helped real madrid and paid the price for it with a red card. it was a
6:37 pm 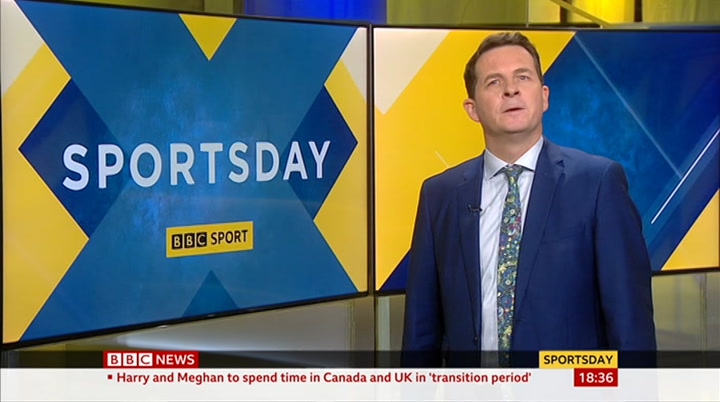 professional foul. let's have a look at some of the other football headlines. former liverpool and spanish international keeper pepe reina is set to join aston villa on loan until the end of the season. he's currently with ac milan but was at villa park yesterday as they were thrashed by manchester city. manchester united have held talks with sporting lisbon over the transfer of bruno fernandes. the 25 year old midfielder, who scored twice at the weekend, is valued at around £60 million. tottenham are close to signing the benfica midfielder gedson fernandes. the 21 year old is set to sign an initial 18 month loan deal. fernandes could be a long—term replacement for spurs christian eriksen who can leave for free in the summer when his contract comes to an end. the dane, whojoined spurs in 2013, could be an inter milan player by the end of the month, but is set to play against middlesbrough tomorrow night in their fa cup 3rd round replay. if you ask me if i think this is the
6:38 pm 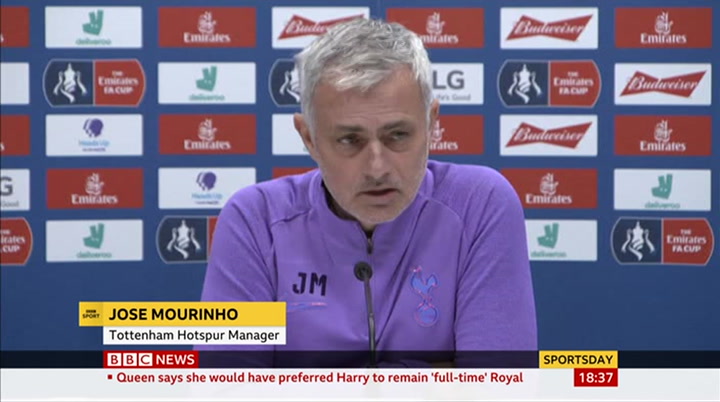 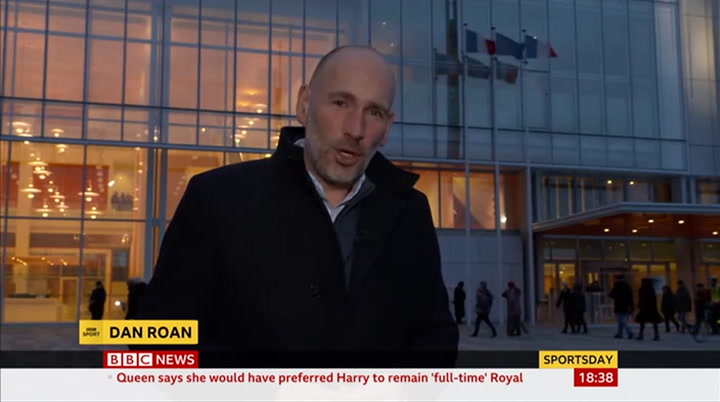 landmark case, not just it is seen as a hugely important landmark case, notjust for athletics, whose credibility really took a huge blow in the wake of the scandal which enveloped diack but he was a hugely influential man at the international olympic committee where he was very influential, french investigators have been looking into the possibility that he was involved with bribery involving votes for various major sports events. olympics, world championships and perhaps a 2022 qatar world cup as well. this case, this trial focuses on whether or not diack extorted money from russian cheap this, whether he covered up their positive tests for money end result of a sprawling conspiracy which was first unearthed some months ago and housed it has taken until now for this trial take place. the nfl now, we are down to the last
6:40 pm 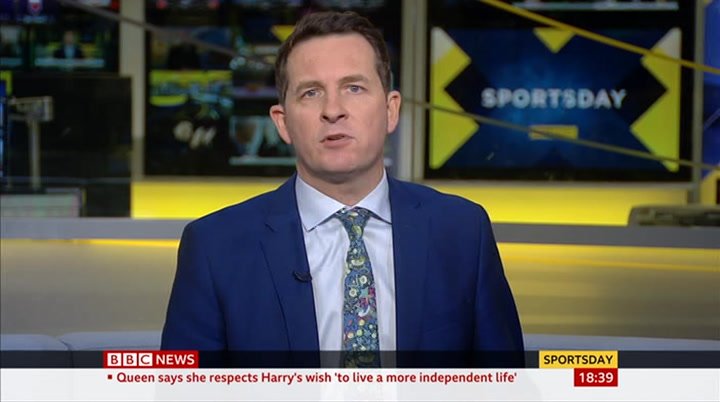 four on the road to the super bowl. we've just had another exciting play—off weekend, austin halewood has been gripped the gridiron as ever, austin, the chiefs looked out of it against the texans. what a comeback. what a comeback indeed. i'll come on to that in moment but this was the picture before the weekend, essentially it was the quarter final stage. the league's split into two divivisions the nfc and the afc with four teams left from each. and as you said, kansas city against houston was the standout game. the texans were away from home in kansas city and they got off to a perfect start. they lead 2a—0 in just the second quarter. but from then on came one of the most emphatic comebacks in nfl history. the chiefs scored a massive 51 points to go on and win the game. they were the first team in the history of the playoffs to score touchdowns on 7 consecutive drives, in one of the biggest
6:41 pm 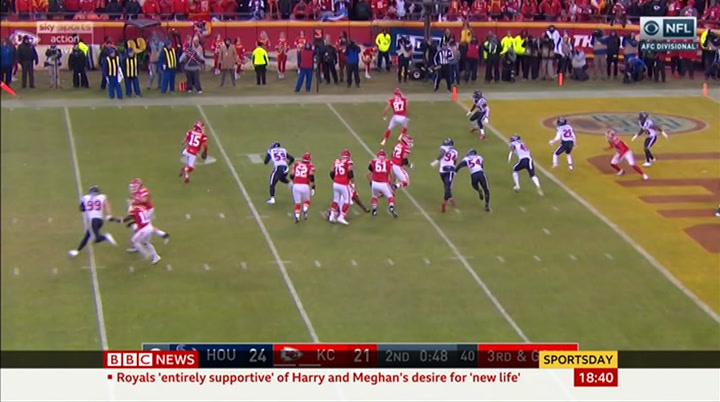 turnaround wins in nfl history. and it was lead by their quarterback patrick mahomes. he's still only 2a, but last season's most valuable player put in a performance that once again confirmed him as the league's brightest star. we did not want to be in that spot but the biggest thing i was saying was let's do something special, let's go do something special, eve ryo ne let's go do something special, everyone is counting us out, let's go everyone is counting us out, let's 9° play-by-play everyone is counting us out, let's go play—by—play and put our best effort out there. obviously i knew asa effort out there. obviously i knew as a team everything had to go the right way but, defence stepped up, offence stepped up, play—by—play we chipped away at their lead and got the half and came out second half and kept fighting. and if you needed any more convincing as to just how amazing that win was, well the chiefs scored so many touchdowns that they actually ran out of fireworks to set off inside the stadium. so what next for the chiefs?
6:42 pm 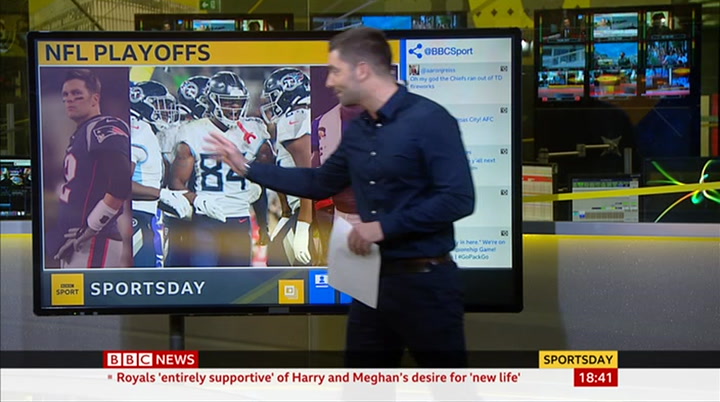 well they go on to face the huge surprise package of the nfl this season. the tennessee titans. they knocked out the new england patriots last week, and shocked the nfl again this weekend by beating the baltimore ravens, the top ranked side in the entire league. now to the other half of the draw and to green bay because the packers are once again through to the nfc championship game. they beat the seattle seahawks 28—23 last night. they beat the seattle seahawks 28—23 last night. now i mentioned one of the young stars of the nfl in patrick mahomes, but the packers were inspired to their win by one of the league's elder statesmen, quarterback aaron rodgers. he made two touchdown passes with this one the best of them to reciever devante adams. and despite a tight finish the packers managed to hold on. well next up for rodgers is a visit to the team he's supported all his life, the san francisco 49ers. this was him cheering them on as a young boy. he was actually supposed to be drafted by the 49ers when he was a rookie
6:43 pm 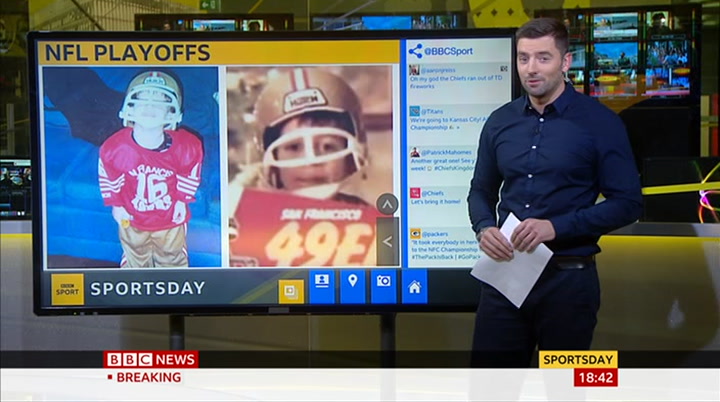 but was snubbed for another. and since then he's made them regret it winning the super bowl in 2011 with green bay. so those two go head—to—head in their conference championship game, essentially the semi—finals, next sunday. as kansas city face tennessee in the other one... james hook will call time on his rugby union career at the end of the season. what a career it's been for the six nations grand slam winner. in 16 seasons he was capped 81 times by wales and during a spell in france with perpignan he was one of the highest paid players in the world. the ospreys flyhalf has plans for life after rugby, coaching and also writing childrens books. i decided enough is enough and i am still fit, i got the option to
6:44 pm 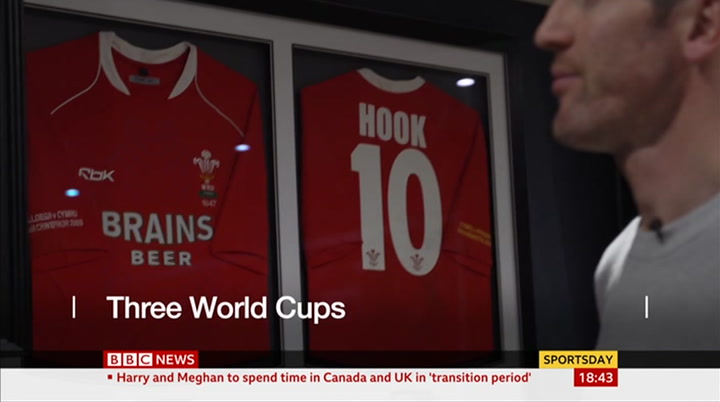 retire on my terms. the nature of the game is physical now and you play a game and it takes you through your four days to get over the bumps and bruises if i am honest so i have a young family, three young boys, a wife as well which i want to be able to go out in the garden and player to come all right with them. i never expected when i was 16 or 17
6:45 pm 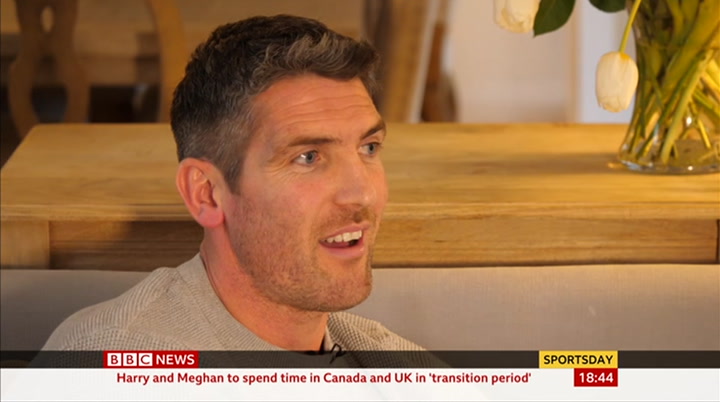 yea rs old to i never expected when i was 16 or 17 years old to have achieved what i have in the game but at the same timei have in the game but at the same time i probably feel i achieve more as well. i played in a number of different positions, i moved to 12, 13 and moved to 15, managed pretty much my whole career. i suppose they are the big things, the silverware. the grand slams and the six nations title and the lions caps and things like that, something i will look back on with pride but i think 2007 against england, the last game of the six nations, we played for the wooden spoon and i moved to town which is, iforth i play my best by which is, iforth i play my best rugby and —— ten and just felt really i had arrived on the international scene. i think one that always sticks out is a world
6:46 pm