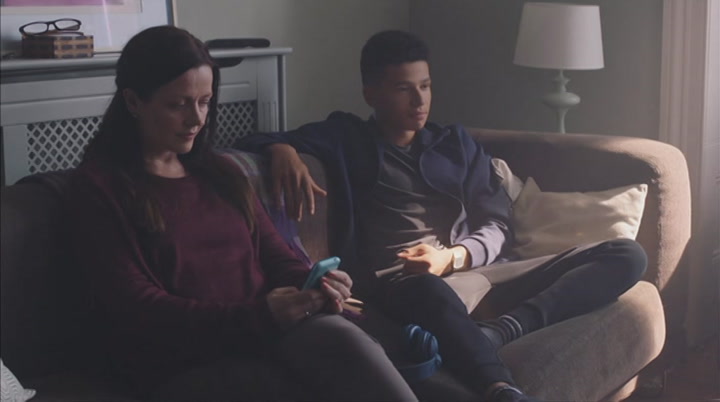 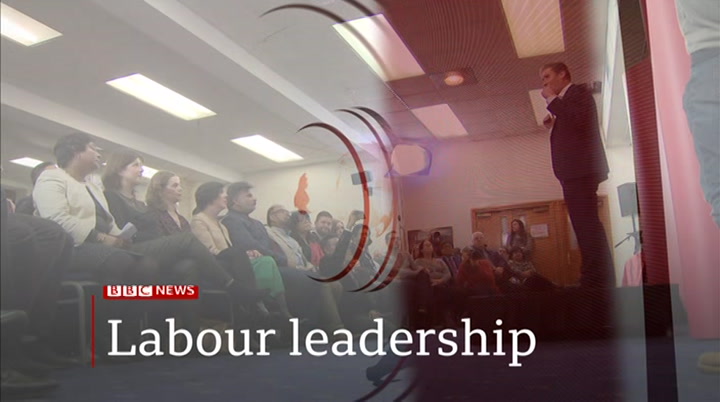 look back a lot further to find the a nswe i’s. look back a lot further to find the answers. 20% of global deaths are due to the limit caused by sepsis. a new study reveals. in a moment it will be time for sportsday but first a look at what else is coming up this evening on bbc news... in washington — the chiefjustice of the united states supreme court is being sworn in for the impeachment trial of donald trump. beyond 100 days brings you the latest on that at seven. after sir david attenborough calls for world leaders to act now and tackle climate change — we'll be discussing the impact fast fashion has on the environment. and at 10:40 and 11:30 this evening our guestsjoining me for tonight's papers are sam lister, deputy political editor at the daily express and the economist and member of labour's policy forum, grace blakeley. that's all ahead on bbc news. now on bbc news it's time for sportsday.
6:32 pm 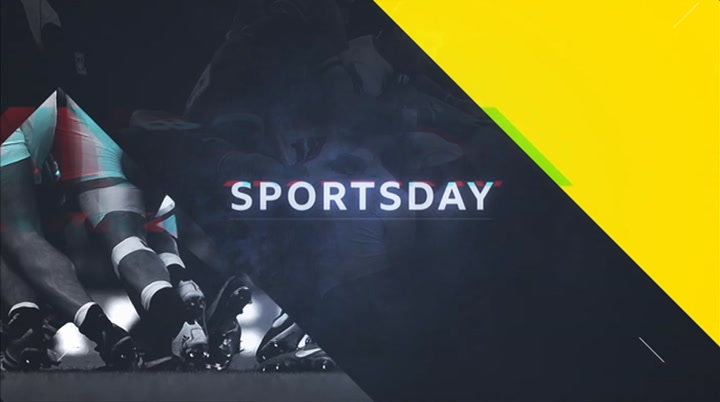 hello, and welcome to sportsday. i'm chetan pathak. coming up on the programme... good repair work from ben stokes and ollie pope gives england the edge on day one of the third test in south africa. a ban on children in scotland heading football's during training could be in place in a matter of weeks. 15—year—old coco gauff will face venus williams at a grand slam again, as organisers of the australian open say the tournament will start on time despite concerns about air quality in melbourne. also coming up in the programme... prince harry carries out the draw for next year's rugby league world cup in england. and we hear from w series driver alice powell on sharing a track with the men, and sharing ideas with other sports women.
6:33 pm

welcome to the programme, thanks forjoining us. it was a roller—coaster opening day for england in port elizabeth as the third test against south africa got under way. with the series at 1—1, england made a really strong start, had a bit of a wobble after lunch, before ben stokes and ollie pope lead the fightback towards the end of the day to leave them on 224 for four at stumps. joe wilson was watching. south africa's captain could foresee many scenarios where this test began. here's what du plessis saw. england batting with a short. they reached lunch without losing a wicket. probably in sibley, the signs were encouraging. but south
6:34 pm 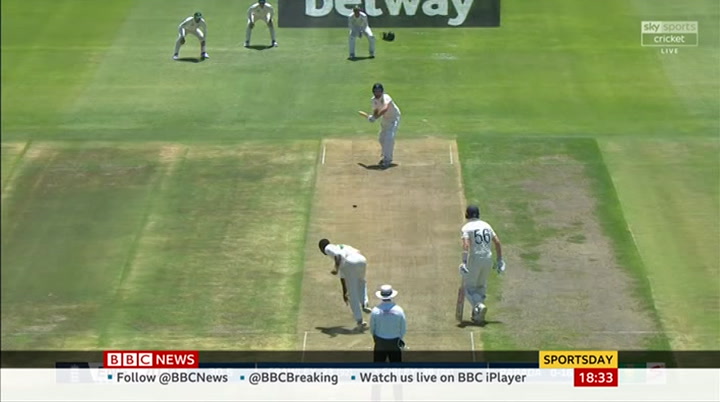 africa set a trap specifically a field there. right there. he caught for 36. as matt crowley would have seen that, but it didn't stop him falling for it. gone 444. the catch erection for one of the days highlights. the calmness of the poor elizabeth ghose was sometimes much by the tranquility of the cricket. —— port elizabeth. any time a fastball he does that, it is a trial. but roberta had just dismissed england's captain, so drain every drop of celebration. every drop. it is a tight match, a tight series but all the pope... and ben stokes will both resume also on the one scenario tomorrow. both batsmen could take control. well a short while ago, i was speaking to the former england assistant coach paul farbrace
6:35 pm 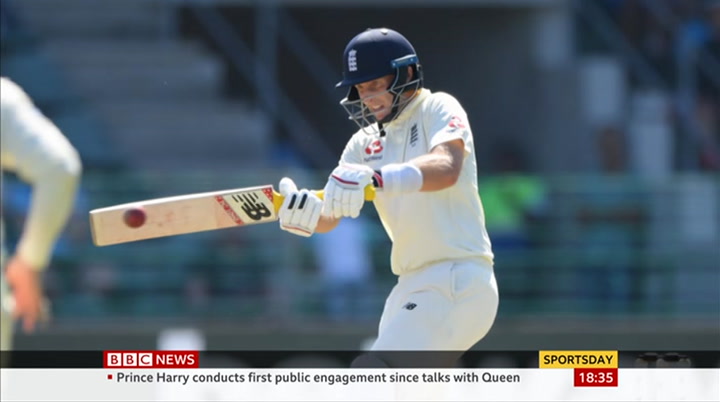 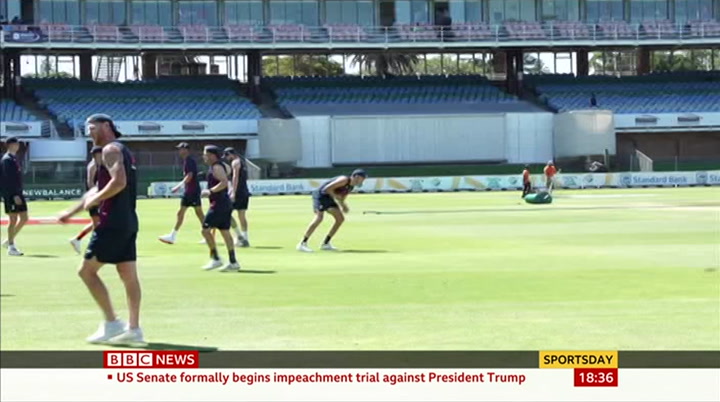 you'll find that quite frustrating. he knows that comes with the territory. england football manager, prime minister, everybody thinks they can do a betterjob. everybody has a view. i think he is a calm and level—headed person and he will deal with it really well. he has good people supporting him. i think he has a good support and he will will come through it well. one man us to be pleased is all the pope. we talk about the experience on the england side. what a foundation that he said. how pleased will pope be?|j said. how pleased will pope be?” thought he played really well. it was somebody who was very impressive when he first came into the side. very level—headed. excellent temperament, knows his game really well. had a break from the england tea m well. had a break from the england team he came back. he really does look high—quality player with a path technique but most important lay, he has a very good understanding of his game. —— with they fantastic frantic. children in scotland could be banned from heading a ball in training within a matter of weeks, because of fears over the links between football and dementia.
6:38 pm 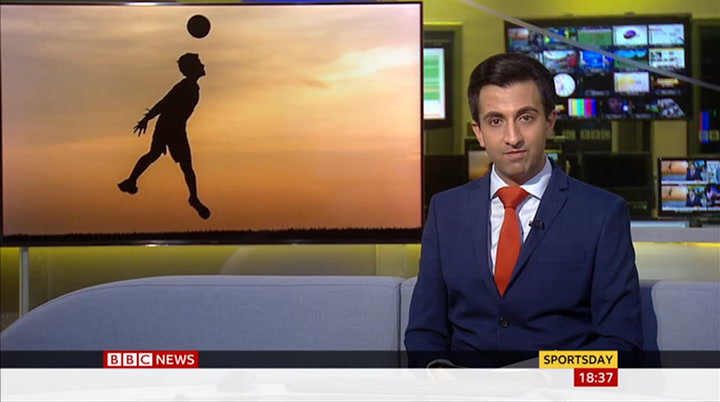 the scottish fa's set to announce its plans after a report that found former players are more at risk of dying from the disease. with the full story, here's our sports news correspondent, chris mclaughlin. billy mcneill scoring for celtic in 1969. typically with a header. the club's former captain and manager died last year after suffering from dementia. his death came just months before a report was published that for the first time a link football with the disease. in fact, the study carried out in scotland said former players we re out in scotland said former players were three and a half times more likely to die from the condition. they have been discussing the issue here at the national stadium four months.
6:39 pm 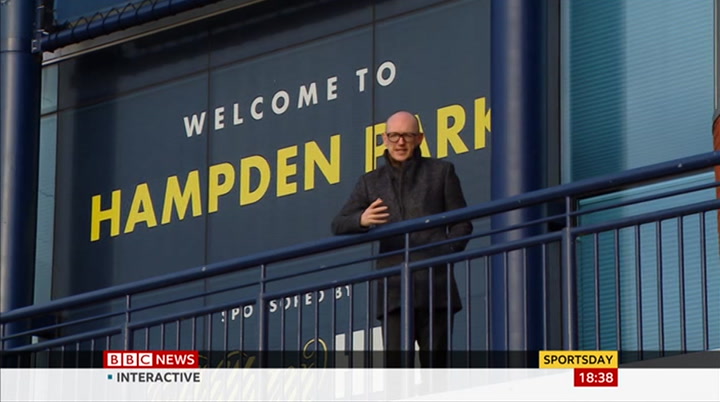 and although there is no firm evidence linking heading a ball to dementia, the scottish fa are taking no chances. and children under the age of 12 will be banned from heading in training. we all appreciate it has taken a long time for the field study to get to the situation. we cannot wait on the evidence one way or other force that we need to take sensible pragmatic steps at the moment. and that is likely going to be to try and reduce that overall burden, the number of times that young players head and heading in training is much more common than in matches. kyle mcculloch does one—to—one youth coaching. he is also coached in the us but a ban on children heading the ball has been in place since 2015. they will want to have the ball. they will want to have the ball. they come excited into training. they see players like rinaldo on tv scoring wonderful goals with his head. that may be the problem here is how we try and and coach them.
6:40 pm 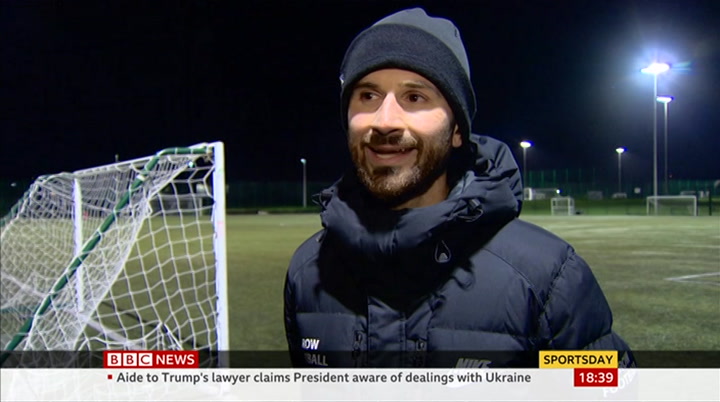 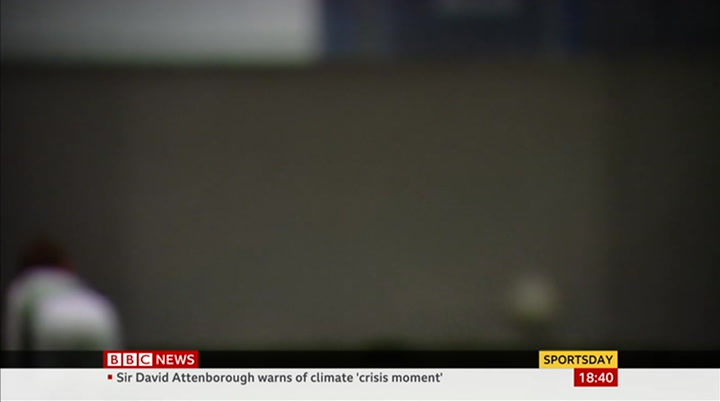 now scotland and say they are at leading the way. as footballs fight with dementia on. well that's the situation in scotland. there's no sign of a similar ban coming in england though. the fa's told us today that its position remains the same as when it looked into the matter late last year. in a statment it says: "there's no evidence to suggest that heading should be banned in youth football and that heading is significantly less common in children's games than people often think." there are health concerns over the quality of the air in australia following the bushfires... but organisers of next week's australian open say they're confident the tournament will start and finish on time in melbourne. the draw‘s been made for the opening round with the most eyecatching tie seeing 15—year—old coco gauff take on venus williams — six months after she famously knocked her out on the opening day at wimbledon. alex gulrajani reports:
6:42 pm 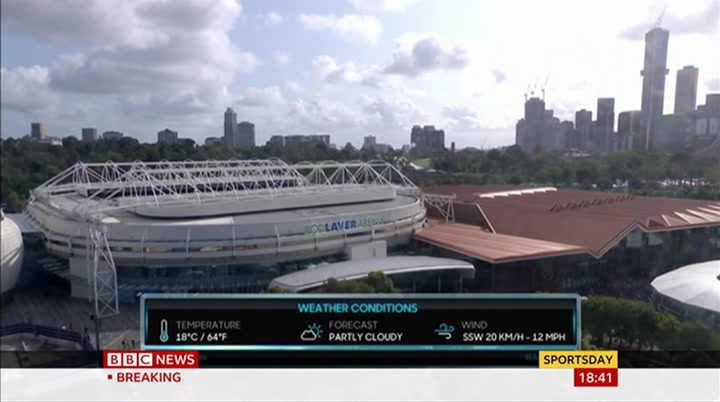 this is what they have been waiting for in melbourne. a break from the smoke. the scene only a few days ago and australia second biggest city, a scene that threatens the first grand slam of the tennis season. but the organisers of the australian open and assist the tournament goes ahead. there's always speculation around the show your hope and not happening or starting later. it is happening. we do have three environments. —— around the australian open. it will happen. not all of the players are happy about it. british player liam broady loss in qualifying, but made his feelings clear afterwards. the show goes on, huge rematch from wimbledon and the women's singles. what teenage sensation coco gauff looking to cast a spell of multiple grand slam champion venus williams in round one. her sister serena is looking to start the decade with a 24th grand slam title. the beat and find a list last year and the woman who beat her in that final is still. in awe of
6:43 pm 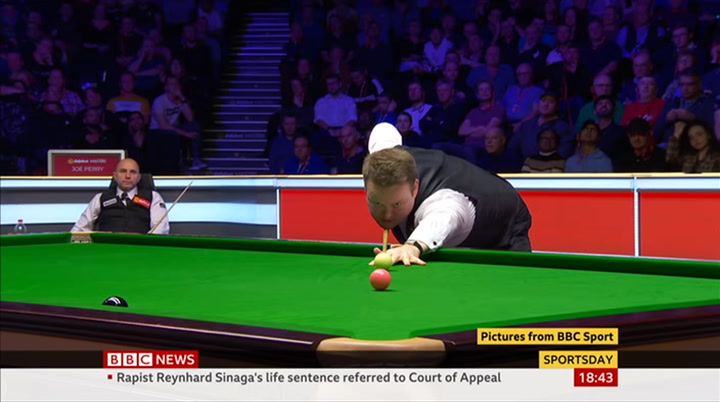 shaun murphy is the first man through to the semi—finals of the masters. he beat fellow englishmanjoe perry by six frames to three at alexandra palace. he'll face the winner of tonight's match between john higgins and ali cardiff in the last four. world number one brooks koepka has returned to compeitive action after a three month lay off. the four time major winner is tied third after his first round at the abu dhabi championship. he had stem cell treatment on his left knee at the end of august and then a fall in october... setting back his recovery. derby county could face a points deduction after being charged by the football league for a breach of spending rules and it relates to losses in three years afterjune 2018 despite the sale of their stadium. spending rules allow championship clubs to lose £39 million over a three—year period. the draw for next year's rugby league world cup in england has taken place — in the magnificent setting
6:45 pm 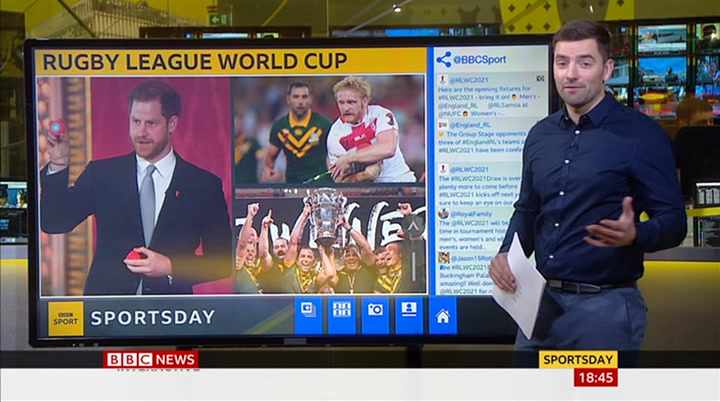 of buckingham palace. prince harry, who's patron of the sport, made his first public appearance since announcing that he was stepping away from senior royal duties. 0ur reporter austin halewood was following the draw for us — and it's fair to say there was more press attention on this draw than there might have been? absolutely. the organisers probably won't be able to believe that look right now. the eyes were very much on the draw this afternoon. more than they could have imagined. this woke upa than they could have imagined. this woke up a set to be one of the most diverse and sporting history. for the very first time the men's women and will run alongside one another with equal pay for the winners and all three in the parity and training facilities and accommodation as well. we know the draw took place at buckingham palace this afternoon and the men's draw went first. let's concentrate on group
left
right
Borrow Program
tv