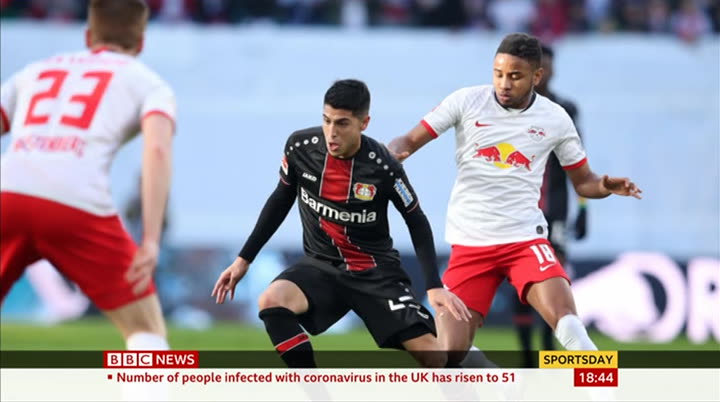 and england have been drawn against iceland, denmark and belgium in the nations league. wales are in with the republic of ireland, bulgaria and finland. scotland have drawn israel, slovakia and czech republic. northern ireland will face austria, romania and norway. the fa cup fifth round continues tonight. three ties including a really big one at stamford bridge where chelsea host a liverpool side who'll want to avoid back—to—back defeats. it's live on bbc one at 7:30pm tonight, the former chelsea and liverpool defender glenn johnson is part of the commentary team, he says... with those results it is huge, they only just scraped past west ham. this game has become huge and of
6:46 pm 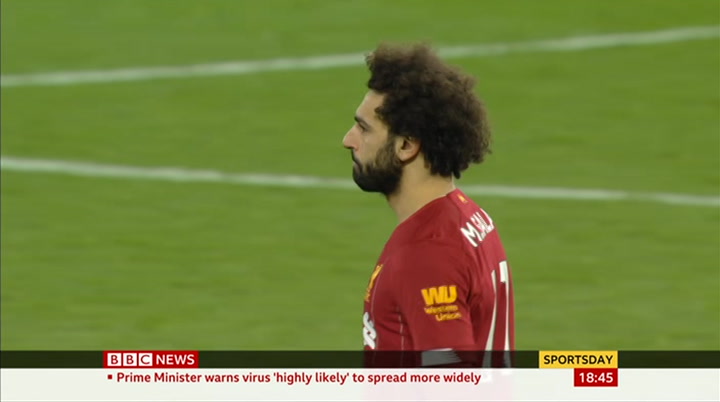 sides come what is it like playing in the sort of match? it is great. professional wa nts in the sort of match? it is great. professional wants to play in the biggest names possible. they are two giants of clubs and they are going to be two top teams, anytime you're a part of this it is a dream come true. where the ux to the game will be won tonight? where will the teams have edge? whoever controls the first 15 minutes. whichever team does the high price and dictates in terms of winning back the ball quickly, both good teams and on their debut can both when so i think it is whoever imposes them for itself first and land is the first patch in the first 15 minutes. so that game live on bbc one from 7:30 tonight. two other games tonight, sheffield united and newcastle both away at championship opposition. updates from those games on the bbc sport website and app. the women's t20 world cup continues in australia, england are preparing for a semifinal against india on thursday but they could be knocked out of the competition
6:48 pm 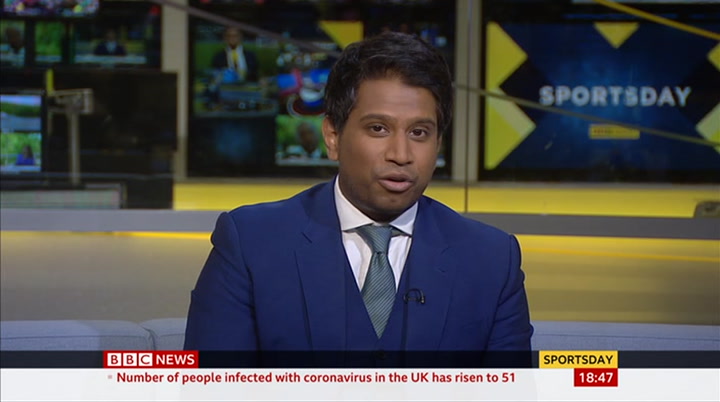 before they even get onto the field. our reporter katie shanahan is here, and this is all about the weather? england could be knocked out of the world cup because of the rain. the tropical storm has already called off to other matches in sydney. and england are meant to be playing on thursday morning but the storm is getting worse. the england players as you can understand will be keeping theirfingers as you can understand will be keeping their fingers crossed because if they do not play, they will be knocked out and india will be the ones to go through to the final as their group winners. the same goes for australia, the hosts and holders who will play south africa only a few hours later. we have to play south africa otherwise australia will be knocked out in south africa will go through to the final. we could see in the and south africa in the final. this will situation will be really difficult
6:49 pm 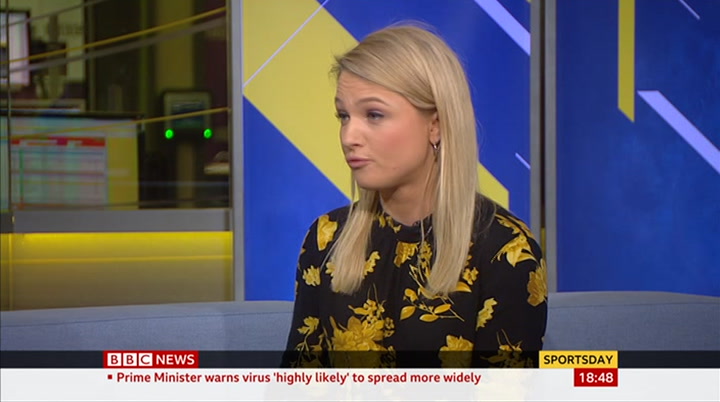 for the england players because not only do they not have the back—up of reserve days but this whole situation is out of their control and ultimately england and australia both know they could be knocked out of the world cup because of the weather. wait to see what happens with that. thank you very much indeed. let's run through some more of today's headlines. scotland's assistant coach danny wilson says talks about finn russell's return to the national set—up can only be good news. the fly—half hasn't played in the six nations at all, after falling out with head coach gregor townsend. he won't play against france this weekend, but has agreed to help with preparations. chris ashton left sale sharks after a disagreement on how the team should be playing, that's according to their director of rugby steve diamond. yesterday, former england player ashton reached an agreement to terminate his contract with the premiership club. and dillian whyte will fight alexander povetkin, in manchester on may 2nd. whyte is the mandatory challenger for tyson fury‘s wbc heavweight title, but he's set for a third fight with deontay wilder. it'll be whyte's second fight since a doping charge against him was dropped.
6:50 pm 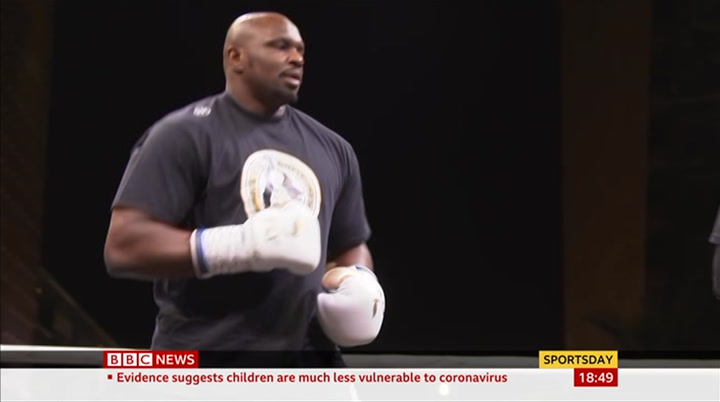 let's focus on cycling for the next few minutes, because the focus for the british team is now solely on the olympics after an underwhelming world championships over the weekend. they won their fewest number of medals in an olympic year since 2000, but the team themselves aren't getting worried just yet. elinor barker and katie archibald were amongst the medallists in berlin, and they say that a lot can change between now and the summer. we have got almost entirely new equipment coming in, the only thing we used last week that we will use a olympics as the helmets. almost everything else will change and that adds up to hopefully quite a lot of time. we set our fastest qualifying team pursuit within tenths of the americans that walked away with a win and we have been like that for a long time, we know what we're doing.
6:51 pm 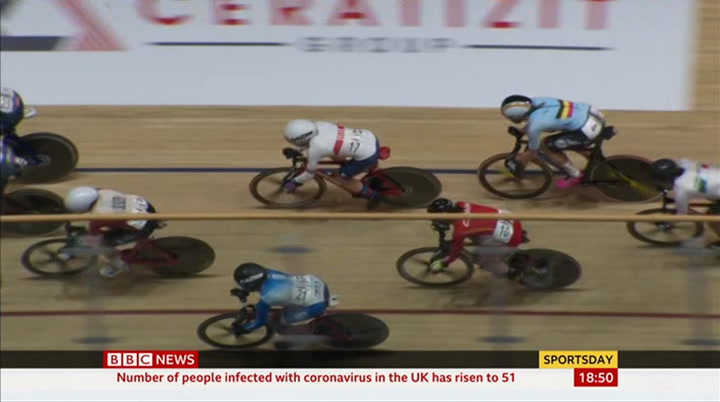 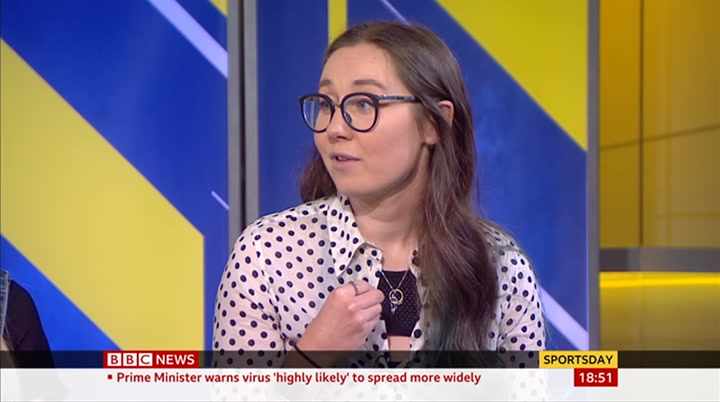 us the support of the nation is behind us and we can understand the context is behind us, it still hurts. when you want a world championship, she isa you want a world championship, she is a contender for gold—medal and to walk away where she was, you can justify it without the context and it is still hard to falsely put made. so really in or, very proud to be laura's team—mate. made. so really in or, very proud to be laura's team-mate. coronaviruses one of the biggest issues affecting sport at the moment. are you worried about how that may affect the olympics in the summer? net not particularly. if it was beef postponed or any of those diff decisions —— to be postponed. we can just prepare as normal and train as if it is going to be as i expected will be. and it is too big an issue for us to try and plan for. the remark all the steps in the uk economic arabic prevention and containing things so hopefully it
6:53 pm 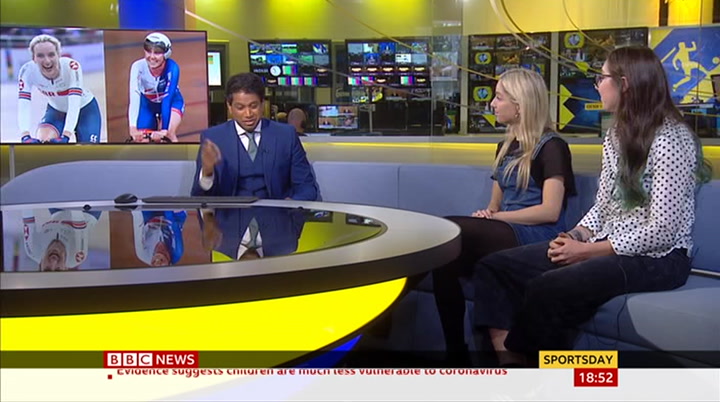 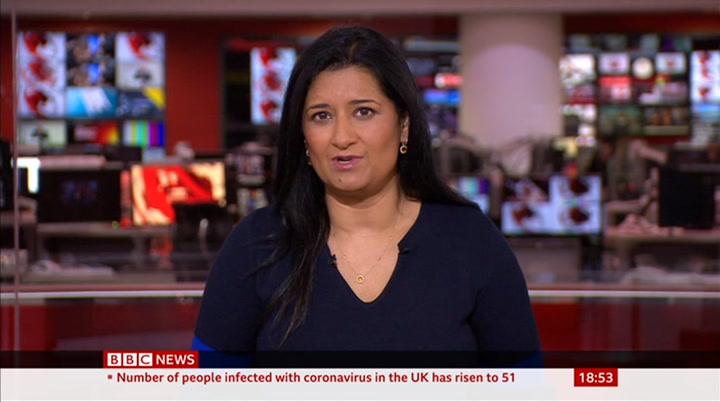 in turkey and syria to try to halt the crisis in the region were the threat of or excreting a looming crisis. thousands of migrants have gathered after ankara said it would no longer stop people trying to stop you up. at over the last few days a lot of refugees have gathered at the border fence after being encouraged to do so by turkish authorities. what has happened today is that we had the visit of three of the most senior members of the european union. the president of the council, the commission and of the european parliament. they came here to publicly show their solidarity with greece. this is notjust the border between greece and turkey but also the border between the european
6:55 pm 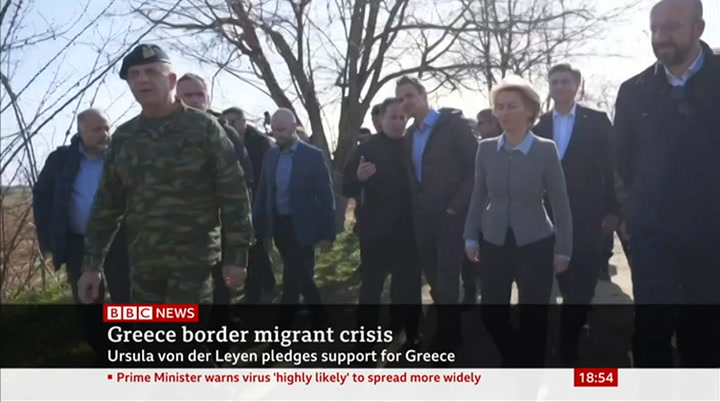 union and turkey. talk about solidarity in their comments afterwards also about support, more money and also security assistance. for greece. particularly in the aegean sea where we have seen oats trying to cross from turkey to the greek islands and there have been some stand—offs therebetween these day knees as they try to cross and the greek coastguard dinghies. a couple of pointed references in the eu comments for the need to greece to do this with respect to human rights and european values. they did not set directly but we do know that there are lots of people who are a little bit worried about greece's decision to cancel the assessment of asylu m decision to cancel the assessment of asylum claims here increase. they have announced that if you get arrested here, having crossed the border illegally, you will not have your claim assessed, you will not be able to stay here any dissension centre. you will be sent right back to turkey. —— detention centre. and
6:56 pm 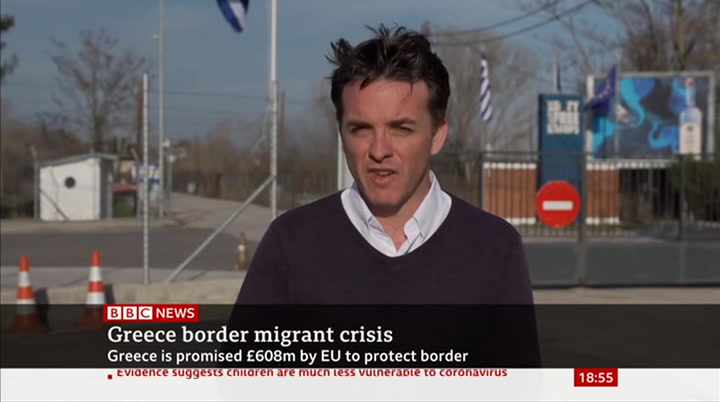 thatis to turkey. —— detention centre. and that is in breach of most international conventions on how refugees should be treated. the greek prime minister was also here and in his comments, much more direct criticism of the role turkey was playing because they don't see it in the context of the migrant movement alone, but turkish aggression against greece carried out with migrants being used as upon. at the moment, this border this relatively secure. we do know that some people have got through but those —— because we have been speaking to them over the past few days. they question is the gnc. —— gnc. hoping to reach europe. the first few days of march have brought some much—needed quiet to
6:57 pm 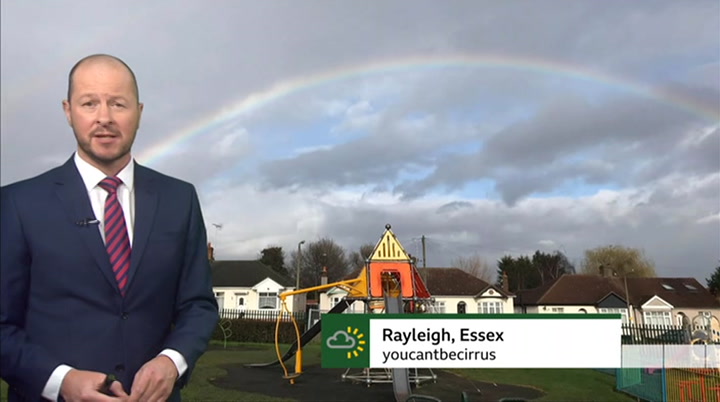 weather. it has been a lecturer of sunshine and showers and their picture sums it up quite nicely. a good day for chasing rainbows. tomorrow we will see a break from this sunshine and showers because we look at this atlantic cloud edge living large bringing rain from the south. no great amount of rain. ahead of that, clearing skies, the showers tend to fade away and with winds like it will get cold quickly. towards the south—west of the cloudless thickening and rain is arriving, not as cold here but further north and east of there will be more widespread frost, colder thanit be more widespread frost, colder than it was last night. a bright and sunny start first thing. this cloud will move north and east bringing the rain from the south—west, pushing it across wales into the south—east of england towards the midlands and some wet weather for northern ireland. some snow over the hills of wales and by the end of the day, perhaps into the peak district as well. further north in scotland some sunshine and showers restricted to the north—west, some showers for south wales, south—west england after the rain clears. that rain
6:58 pm 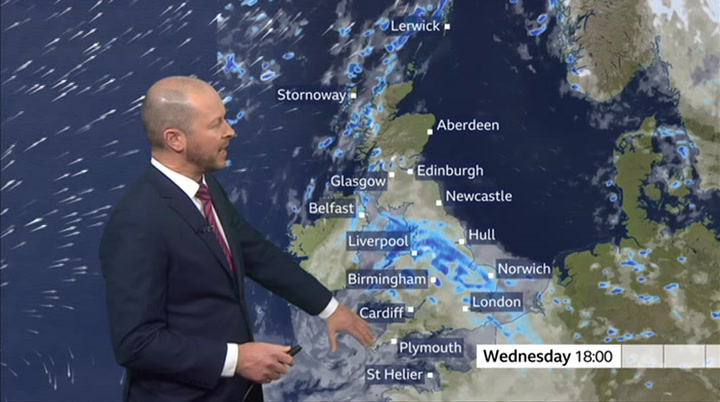 rather ragged and patchy wellhead slowly north, grinding to a halt across northern england. 10—15 millimetres of snow over the pennines. wet weather easing off later in the night too much thursday morning. another area of low pressure as well, keep a close eye on this one, it threatens to bring some heavier rain through the english channel and perhaps the far south of england. further north, an improving picture in northern england after that damp weather overnight and from most places showers continuing to run into northern ireland and scotland. cold enough to be wintry over the high ground. we lose an area of rain and low pressure during the evening in time for this weather front approaching from the atlantic. it is approaching from the atlantic. it is a very weak weather front, no contrast either side of it so a narrow band of patchy rain with some snow over the hills further north. it may well be that the showers behind that are a bit more potent
6:59 pm 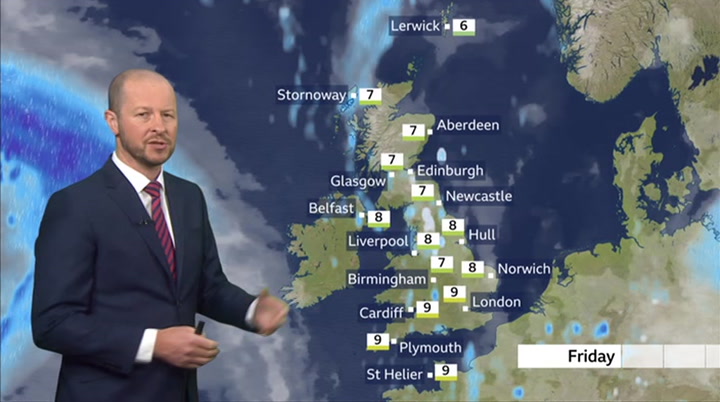 and heavy and back again wintry over the high ground with temperature stuck at around 7—9dc. we don't have a name storm but it will be turning windier with more rain on the way on saturday to be replaced by sunshine and showers on sunday.
7:00 pm 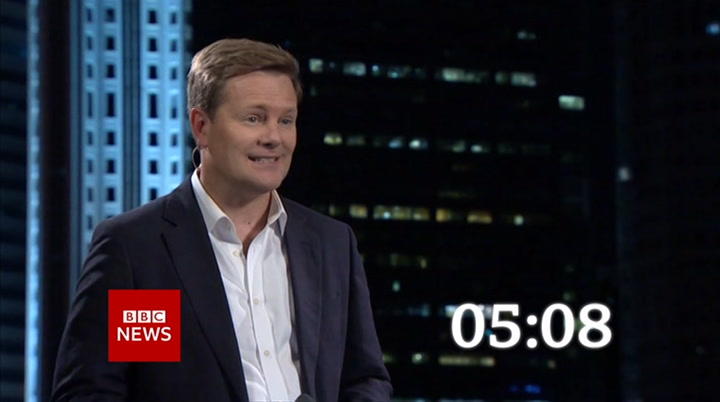 you're watching beyond 100 days. the who says the death rate from coronavirus is now higher than seasonal flow. in the coronavirus is now higher than seasonalflow. in the uk, the nhs has declared it a level for incident, the most serious. so, the nhs has put it up to level four and the government now insists it has a plan to tackle the virus and virus and stop the spread until the weather gets warnmer. voting is under way on super tuesday, the most significant day in the race to select a democratic candidate to take on donald trump in november.
left
right
Borrow Program
tv