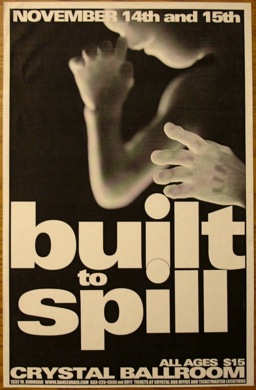 With the Hand and the Delusions.
The first three numbers were from Doug's [then] unreleased solo record. Doug sang and played acoustic guitar without accompaniment on the first two; Jim Roth came out and helped out on the third one. Dave Kepple of the Delusions played guitar and sang on several songs, including The Plan, Reasons, White Man..., and What Goes On. Dave also did a harmonica part in White Man in Hammersmith Palais. Toward the middle of the set there was a new song, titled "Good Enough" on the set list. (This later turned out to be'Heart (Things Never Shared).' --Mark) Scott sat out, and Jim played pedal steel guitar on this one. For the Halo Benders songs, Calvin Johnson sang and Ralf Youtz played drums; they stuck around for Free Bird, and were joined by a guy named Porter... don't know his last name.*

*Porter Harp is the name. A Seattle-based musician. He recently shared to me the following recollection: "I was the fill in guy for Netson for Freebird when he got called away to do Lanegan for last 5 shows of the tour (Portland & Seattle)." -- DRC, May '19