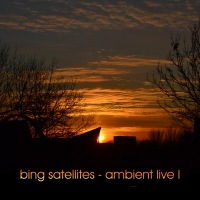 On the spur of the moment, on Saturday 28 January 2012, I broadcast an improvised ambient set on mixlr.com/bingsatellites, live, as it happened.

There were a few glitches in the broadcast which I have ironed out of the recording.

What you get here, from that broadcast, is nearly an hour of atmospheric ambience performed on flute, glissando guitar and the rest of my usual set up.

I will be broadcasting and recording more performances in the future. These will be collected on further Ambient Live albums.
I will announce these live broadcasts shortly before on www.facebook.com/bingsatellites

You can find alternative file formats and a chance to contribute at bingsatellites.bandcamp.com/album/ambient-live-1

Uploaded by mostlyambient on February 8, 2012