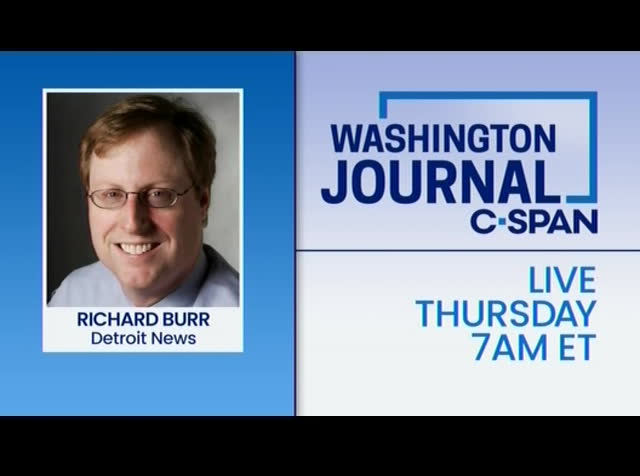 the country will visit the battleground state of michigan, detroit news reporter richard burr will join us on board the bus to talk about michigan's role as a battleground state. and how the 2020 campaigns are playing out of the state so far. what c-span washington journal live at 7:00 a.m. eastern thursday morning join the discussion. watch c-span3 thursday live at 9:00 a.m. eastern as acting director of ãbchaired by congressman adam schiff. democrat from california. and congressman devon nunez, the republican ranking member from california. i'm handling of a whistleblower complaint involving president trump live coverage thursday at 9:00 a.m. eastern on c-span3 or
8:48 pm 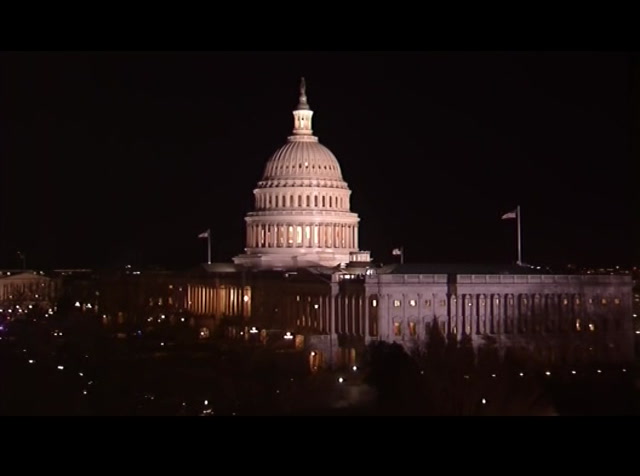 live on c-span.org or the c-span radio app. senator rick scott of florida and bob menendez of new jersey came to the floor to talk about temporary protection standards for venezuelan citizens fling their government. the senators disagree on certain tenets of the potential deal. this debate is about 10 minutes. >> mr. president. >> senator from florida. >> i rise to speak today about my amendment to hr 549. which grants temporary protective status, tps, for venezuelan, fleeing nicholas maduro oppressive regime and reform to the broken cps program. i'd like to thank my friends senator marco rubio and congressman bullard is have a been advocates in the venezuelan people as we fight for r freedom across the globe. i'm proud to her work with sam rubio along with my colleague ã ãto offer protections for the venezuelan people while making the forms to tps. rathe crisis in venezuela is a defining human rights issue of our time.
8:49 pm 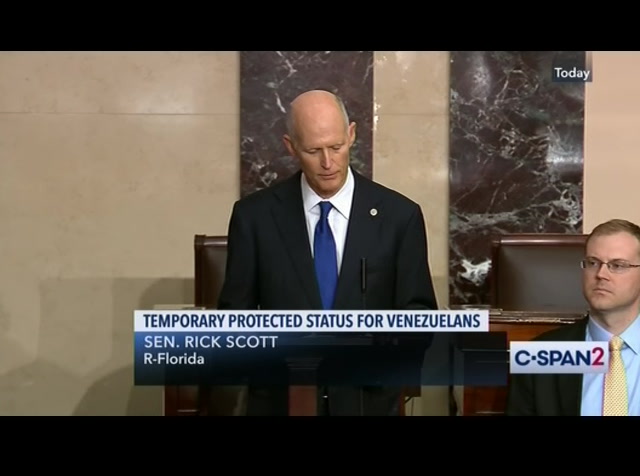 maduro is starting his own people and innocent children are dying. what's happening in venezuela is pure genocide. we have to act but we also need to be responsible. the courts have basically made a temporary program permit which is not sustainable. my amendment protects a vulnerable venezuelan population while making sure human rights violators are clearly identified as ineligible to come to the u.s.. my bill grants tps from venezuelans right now. the amendment also makes much in reforms to our tps program the amendment grants tps to venezuelans for 18 months. requires congressional approval for tps extensions no more than 18 months at a time. my amendment limits the ability tiof the illegal aliens with no connection to the tps designation to benefit from
8:50 pm 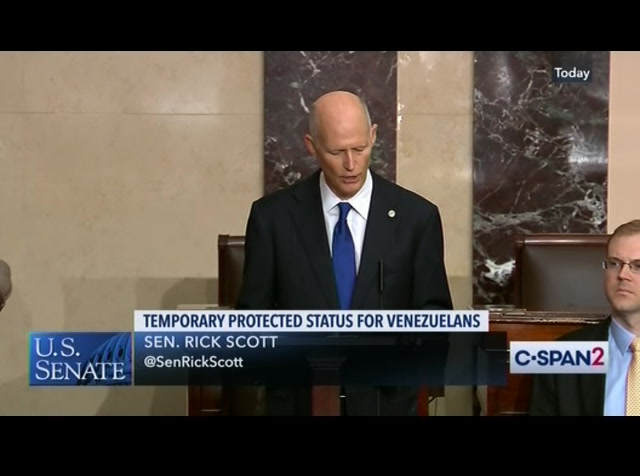 tps. insurers human rights violators identified under the magnetics heat act are not eligible for tps status. includes provisions to distinguish the tps status does not count as admission for purposes of the immigration and nationality act. under my amendment tps recipients could not return to the tps country during the period of designation. and finally, amendment requires current tps declinations will come up for congressional review two years after the enactment of this amendment. we want those seeking refuge for more oppressive regimes to have a safe haven in their country. but we need a system that works and is truly temporary. i am honored to work with my colleagues to get something done today to help venezuelan families and make much-needed changes to our broken system. mr. president i asked consent to address the senate in spanish. >> without objection. >>.
8:51 pm 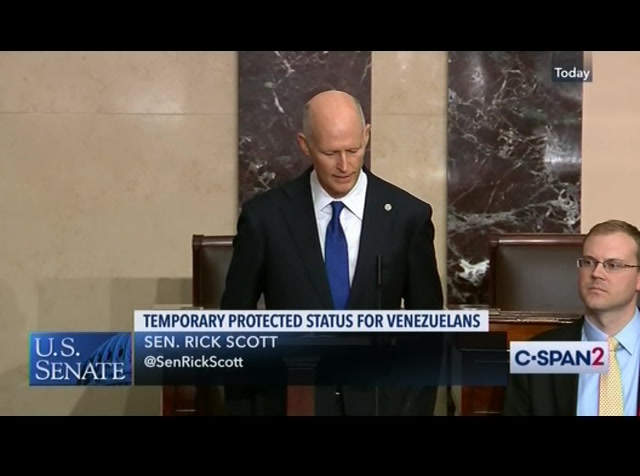 [speaking spanish] i ask unanimous consent to committee on judiciary be discharged from further consideration in the senate proceed to immediate consideration of hr 549 i ask unanimous consent that the scott of florida amendment be great to and that the bill as amended be considered and read a third time in past the motions to be considered be made considered laid upon the table. >> is there objection? >> mr. president, reserving the right to object. every member of the senate knows that venezuela is illegitimate dictator nicholas maduro has created an unprecedented and harrowing humanitarian crisis in that country. extreme food and medicine shortages, widespread criminal violence, brutal state-sponsored tarepression
8:52 pm 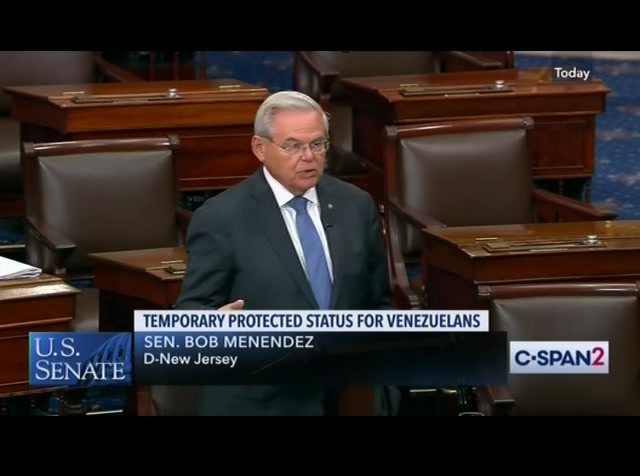 across more than 4.3 million venezuelans to free their d.homeland. this number could reach 8 million by the end of next year. as venezuelans flee their countries is time for the united states to place itself fully on the side of the venezuelan people. unfortunately just this week we've seen new stories about the trump administration deporting venezuelans from florida. it's unconscionable that anyone would be sent back to the catastrophic humanitarian conditions that exist in venezuela.that's why in february of this year senator durbin and i along with senators rubio, lahey, booker, introduced jbipartisan legislation to provide tps to venezuelans living here in the united states. the house of representatives has already passed a version of this bill back in july with support from dozens of republican members.
8:53 pm 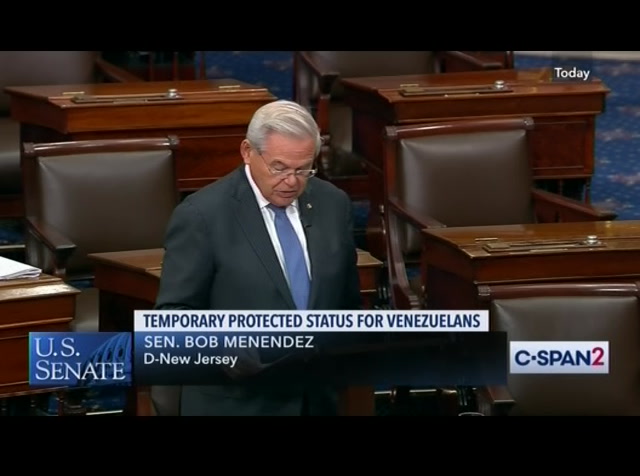 however, rather than providing tps with vulnerable venezuelans of the united states, the junior senator from florida brought up in amendment to speak to overall existing tps statute and make it easier for sthe trump administration to strip status from burnable migrants that are legally in the united states. respectfully, the suggestions that the courts have made it impossible to end any tps is just not based in fact. this debate is not about watering down our immigration laws, it is about using the laws that we have right now to provide protection to venezuelans so we can ensure they trump administration doesn't deport them back to the nightmare they fled. so it's unfortunate while i joined the senator in the same goal that the senator from florida would prefer to pass legislation that advances the administration's immigration agenda rather than help
8:54 pm 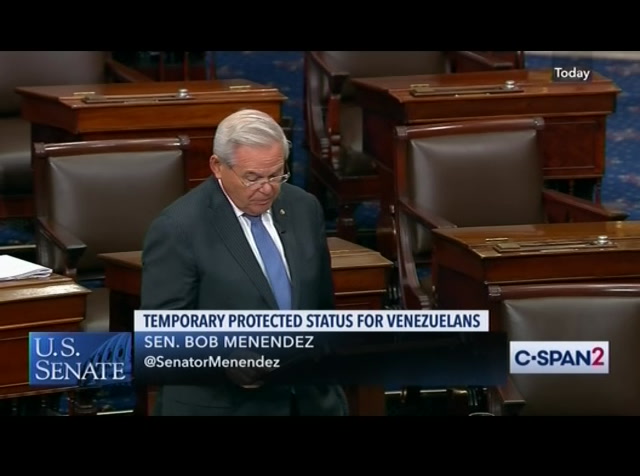 vevenezuelan people. something we all can agree about. as a matter of fact, we don't really need congressional action because the president has the right to give temporary protective status to the venezuelans living in the united states and he doesn't need an action of congress to do that. he has failed to do that. tand it's in that figure that the house of representatives act to try to create a legislative response and for all these reasons i object to the unanimous consent request for the senator of florida and while we agree on the need to provide tps for venezuelans, as if in legislative session i ask unanimous consent that the judiciary committee be discharged. >> the objection is heard.>> okay. and let me continue.
8:55 pm 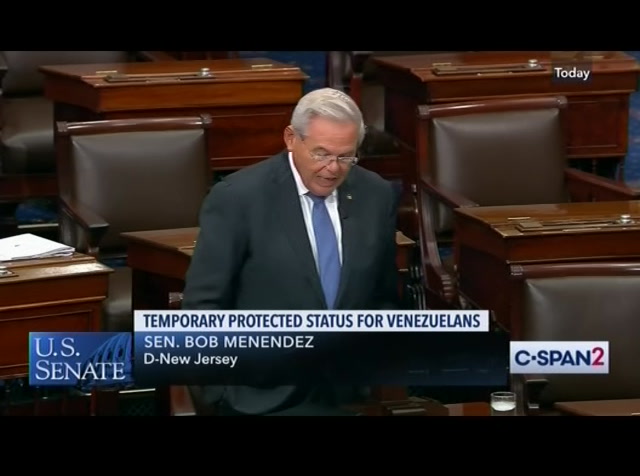 to say that since the senator of florida, and i do agree on the need to provide tps for venezuelans, but that i ask unanimous consent of the judiciary committee be discharged from further consideration of hr 549, the bill already passed the house and the senate proceed to immediate consideration further that the bill be considered read a third time passed the motion reconsidered be considered made delayed behind the table with no intervening action or debate. >> is there objection? >> mr. president. >> senator from florida. >> reserving the right to object, abject on behalf of my colleagues senator rand paul. propose is a bill that grants tps to venezuelans right now. also make much reforms to the tps program and give congress rightful oversight. am very disappointed that my democratic colleagues would block this commonsense compromise republicans
8:56 pm 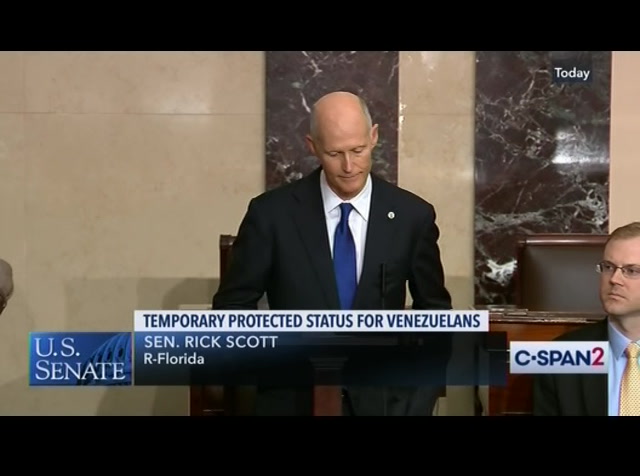 supported. the sponsor of the house bill passed bill supports it. i believe the president would sign it. it's clear that the democrats actually don't want to get something done on this .issue. dave decided to use the venezuelan community as a political prop instead of working with us to find a solution. i think that's shameful. even though the democrats stood up and blocked tps grfrom venezuelans today, i will never stop fighting to support the venezuelan community here. my amendment is a solution that can be passed by congress and signed into law by the president. i hope my colleagues on both sides of the aisle help us get this done. we cannot lose sight of the fact that nicholas maduro is killing his citizens. it's genocide. every passing day the situation on the ground grows worse. hundreds of thousands of venezuelans are in starvation and under maduro's socialist regime and they need our help. while extending tps to venezuelans is the right move, united states and freedom
8:57 pm 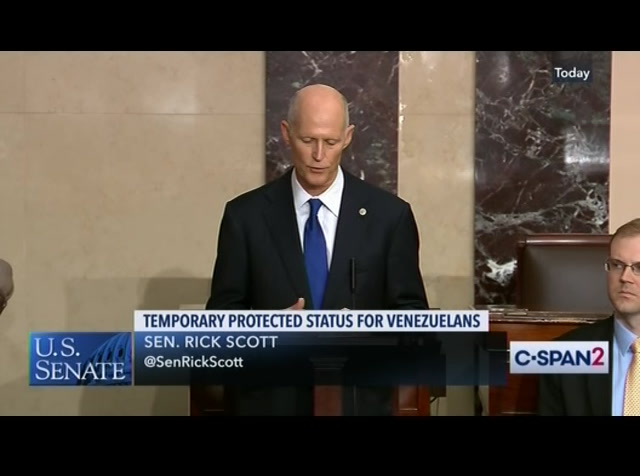 loving nations around the world need to do everything in our power to isolate maduro in venezuela and cut off the supply of money from the cuban. we have to force maduro out. it's time to help venezuelan families, it's time to get tps reform done in this country temporary protected status was never meant to be endless it was meant to help families in need. we need to get this program to work we need to get tps from venezuelans today. i look forward to working with all my colleagues and helping all the families in venezuela and filing getting a long-term solution to tps. thank you. >> mr. president. >> objection is heard.>> mr. president. >> senator from new jersey. >> very briefly, i regret that my colleague has gone down the road of questioning political motives. the reality is, in a bipartisan way the senior senator from florida join with us in february of this year to provide legislation that would provide tps with dull venezuelans in the united states. the house of representatives which has a democratic majority, he mentioned democrats, passed a version of this bill in july of this year
8:58 pm

which with support from dozens of republican members.a bipartisan effort in the house of representatives. at the end of the day it doesn't take undermining tps dramatically changing tps in order to get venezuelans temporary protective status. that is something the president could do without the house of representatives or the senate acting, he has chosen not to. there are those who want to try to create an excuse for the president but he has chosen not to do it, number one, number two is, the reality is, if we wanted to create tps for venezuelans, we could immediately do that right now. by having accepted my unanimous consent request because the house of representatives passed with broad obipartisan support we could do it right now would be on its way to the president and then of course he would have to decide whether to sign
8:59 pm 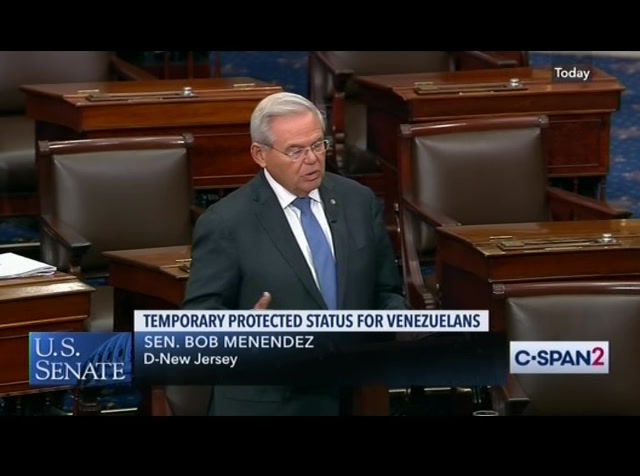 the legislation even though he could do it on his own right ou now. i hope we can work toward the goal that actually getting the venezuelans leading in the united states seeking refuge from the violets, from the chaos, that is venezuela, that opportunity and i'm not ready to undermine all of temporary protective status in order to do that. >> with that i yield the floor. >> c-span washington journal live every day with news and policy issues that impact you. coming up thursday morning, as the c-span bus continues our campaign 2020 battleground states to work across the country we will visit the battleground state of michigan, detroit news reporter richard burr will join us on board the bus. to talk about michigan's role as a battleground state. and how the 2020 campaigns are playing out the state so far. watch c-span washington journal live 7:00 a.m. eastern thursday morning. join the discussion.
9:00 pm 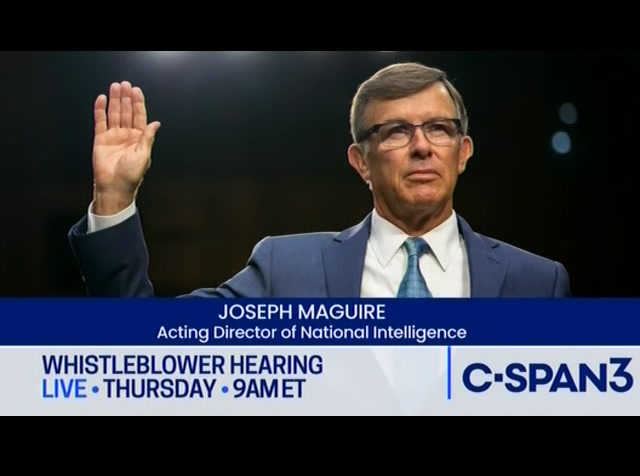 Senators Rick Scott (R-FL) and Bob Menendez (D-NJ) came to the floor to talk about Temporary Protections Status for citizens of Venezuela fleeing their government.