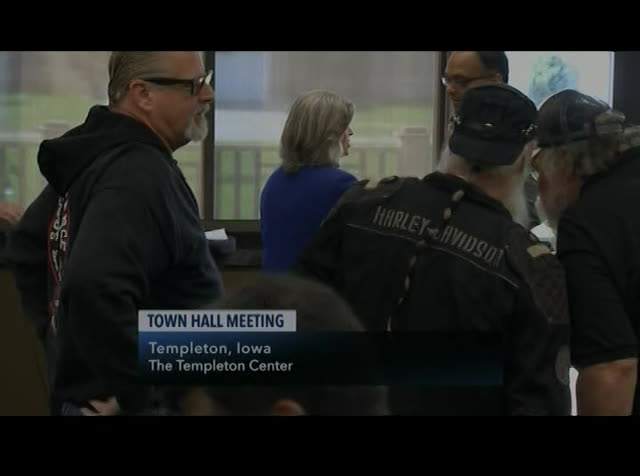 [inaudible conversations] >> we are going to take you to afternoon session of a day-long conference on immigration law and migrant policy. starting live at 2 p.m. eastern. but first, a look at this morning's session after the acting homeland security director was shouted down by reporters. >> today you'll hear, again, hear voices from across the spectrum and from different vantage points. up doubtedly, you won't agree with all of them. but at the time when immigration has become so polarized, we firmly believe it is important to hear directly from stakeholders on what's animating their thoughts and actions, be able to question them and have a thoughtful, civil and informed dialogue. so again, welcome, and we look forward to a full day of engaging and provocative discussions. let me now introduce acting secretary of homeland security, kevin mcaleenan. he became acting secretary in april at the helm of a
1:52 pm 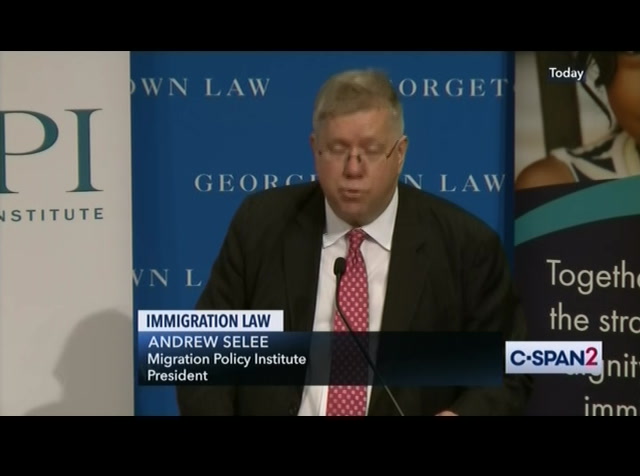 240,000-person agency, responsible for everything from airport and cybersecurity to performance response, the facilitation of trade and travel, prevention of terrorism and much, much more. more importantly for our purposes today, dhs is responsible for crucial aspects of immigration, u.s. customs and border protection and u.s. immigration and customs enforcement. before becoming acting secretary, mr. mca lee man held a number of roles including serving as commissioner, deputy commission exercise director of cbp's largest field command. he received a presidential rank award in 2015, the nation's highest civil service award with, and a decade before he received the service of merit medal for spearheading efforts to develop an anti-terrorism stooge in the border security context. he holds a law degree from the university of chicago. as just about everyone in america knows, immigration is
1:53 pm 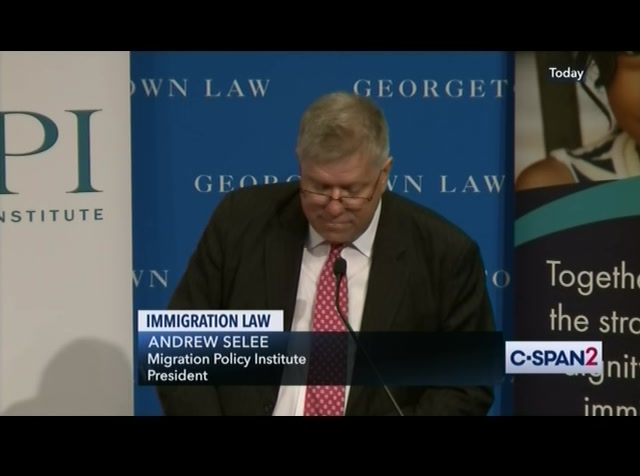 about as contentious, complex and polarized a subject as exists today. dhs and the acting secretary is the center of that whether it's the major changes at the u.s./mexico border, the signing of cooperation agreements with mexico and central american countries or reshaping the illegal immigration system and refugee policy, all summits we'll discuss at length today in our panels. but for now, i know you're eager to ask the secretary questions during the question if answer period that will follow his remarks. with that the, i'll turn it over to you, secretary mcaleenan, and doris will be chairing the question and answer period. secretary mcaleenan. >> thank you. [applause] >> [inaudible]
1:54 pm 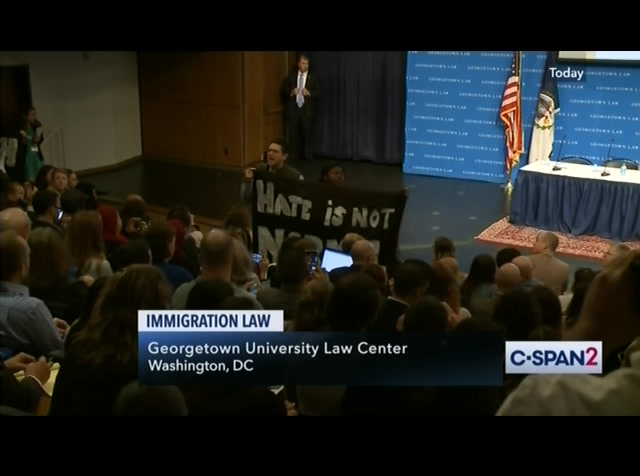 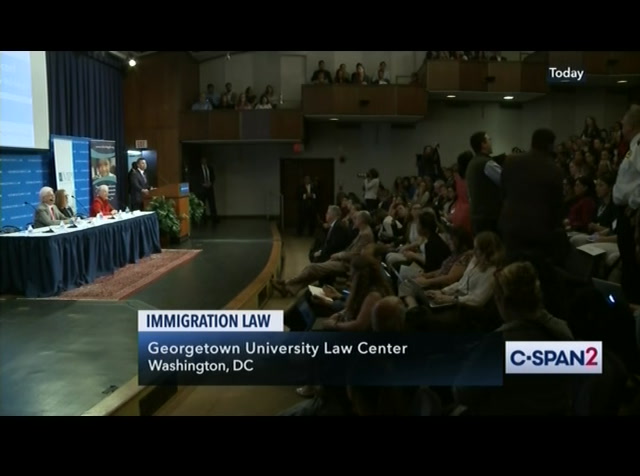 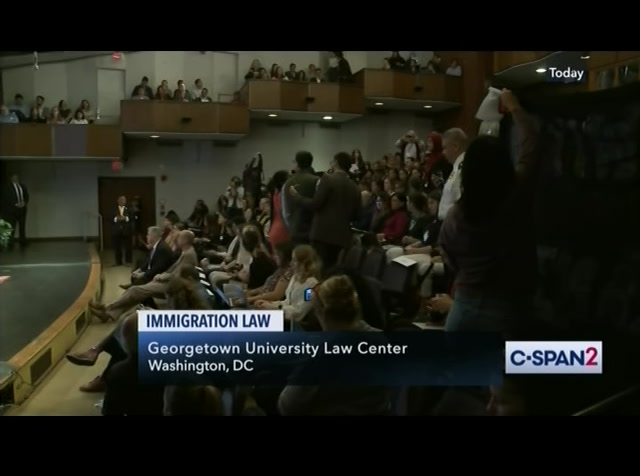 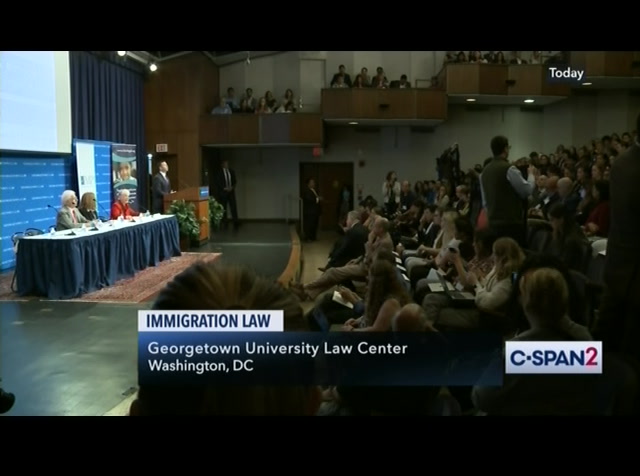 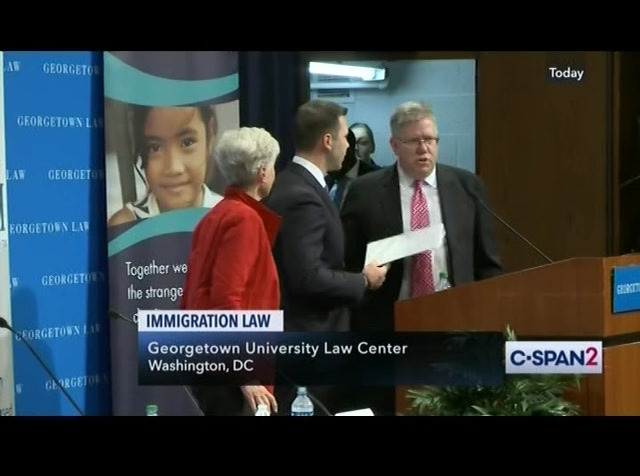 professional, i've dedicated my career to protecting the rights to free speech and all the values we hold dear in america from all threats so -- >> bullshit. [laughter] >> we'll go ahead and try one more time, but otherwise i'm going to go back to work and --? >> [inaudible] [inaudible conversations] >> we can post it on your web site. >> colleagues, you're invoking democracy. democracy requires dialogue. it requires listening. it requires a two-way street. the secretary has agreed to take questions and answers. we are robbing time from the period of questions and answers where we can engage with the public. could we please listen to his remarks and then have a chance to question him, including people who disagree with him may question him. >> [inaudible]
left
right
email Borrow Program

Homeland Security Secretary McAleenan attempted to address an all-day conference on migration at the U.S.-Mexican border. His remarks were interrupted by audience members.