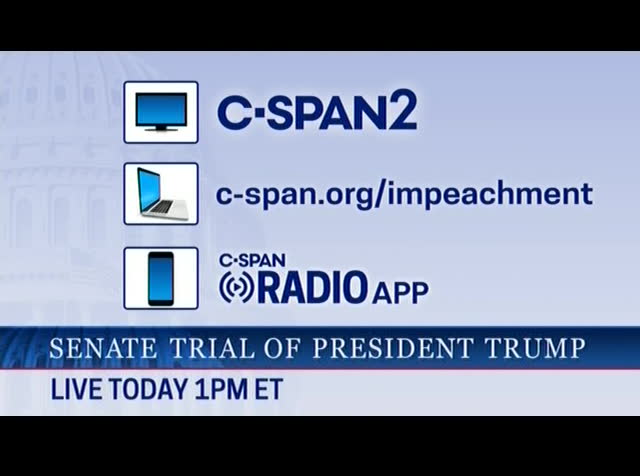 is the first question to the desk. >> the impeachment trial of president trump, live today at 1 p.m. eastern on c-span2. on demand at c-span.org/impeachment or listen on the free c-span radio app. c-span, your unfiltered view of government created by cable in 1979 and brought to you today by your television provider. >> republican lawmakers react to the case presented by president trump's defense team at the second break in monday's trial. we get remarks from senators barrasso, ernst, braun and cruz. later we also hear from house manager adam schiff. >> there we go.
9:58 am 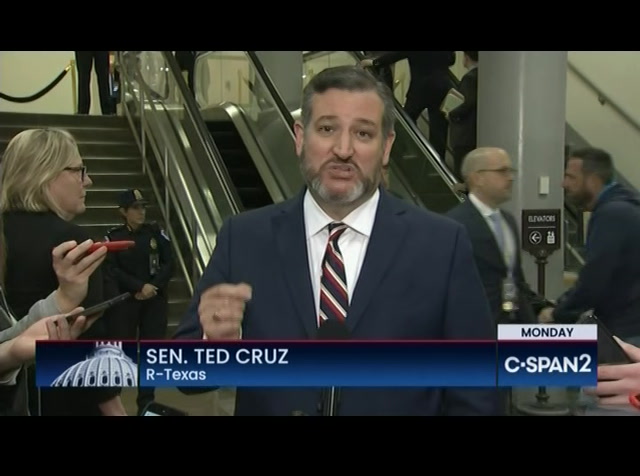 withhold a billion dollars in aid unless and until they fired the prosecutor investigating his son. joe biden threatened-- joe biden, vice-president. united states and we just saw a video which would encourage every news outlet to actually show the video of joe biden bragging how he told the president of ukraine he was going to cut off a billion dollars, he was going to block a billion dollars in foreign aid to ukraine unless they fired the prosecutor and in joe biden's own words, sonofabitch, they fired the guy. >> you said you'd answer the question, so-- >> hold on, hold on. >> i'm sorry, let him answer the question. >> i did ask the question-- >> i guess that the press moves to obsess over the latest bombshell. listen, i don't know what john bolton's book says or doesn't say. i've seen the new york times coverage, but at the end of the day, it doesn't impact the
10:00 am 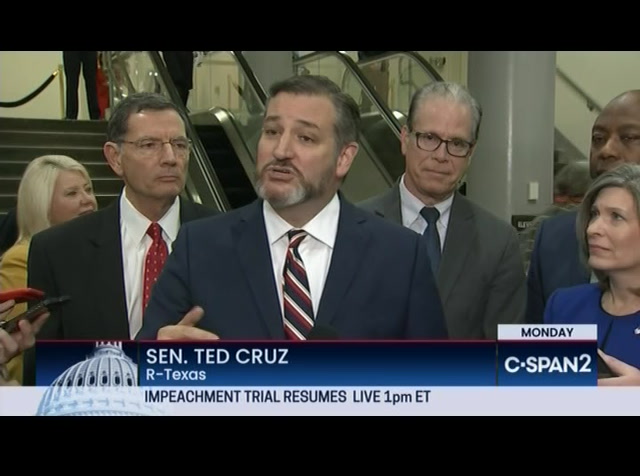 legal issue before this senate. the legal issue before this senate is whether a president has the authority to investigate corruption. so the house managers built their entire case on the proposition that investigating burisma skrupgs... we have just seen two hours of evidence and at a minimum it was not only reasonable and justified, but the president i think had an obligation to investigate corruption that potentially extended to the very
10:01 am 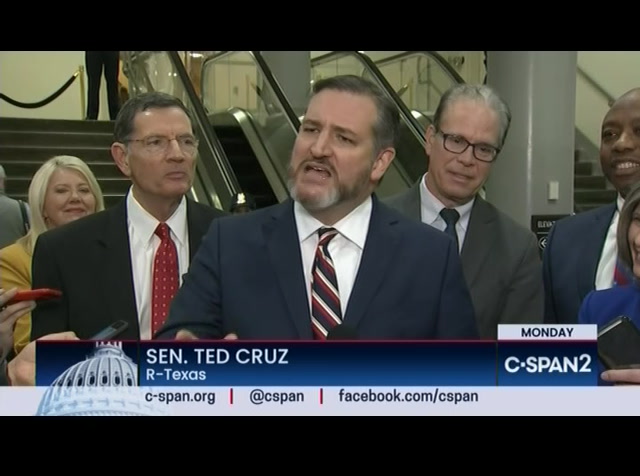 highest levels of government. >> none of the president's attorneys mentioned one single possible -- [inaudible] message with this it was hunter biden got the job. if that's a crime, shouldn't your children be in prison? >> my children are nine and 11. i'm sorry want to throw a nine-year-old in prison but at this point, my third grader plays basketball and softball at her school. so stop playing the nasty -- no, no. stop playing the nasty washington game. >> that's not -- >> attacking a nine-year-old? >> senator king we see reports about a possible one for one witness exchange. would you be open to ideas? >> additional witnesses are not necessary. house managers present the case. they happened, remotely close to meeting their burden of proof. that being said, if the senate later this week when the vote on
10:02 am 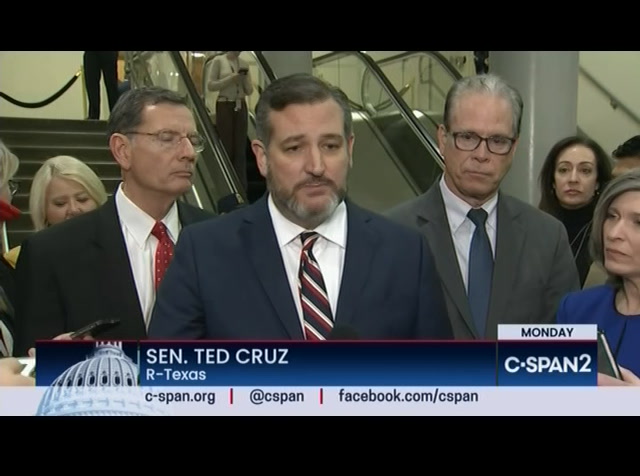 witnesses decide to go down the road to do additional witnesses i think at a minimum the most important witness for the senate to hear from is now hunter biden. house manager made -- let another report have a chance. >> why don't you want to hear from john bolton? >> i don't believe the testimony is necessary. the house managers have the burden of proof, a burden of proof to prove their case. they have fallen woefully short. the standard under the constitution is high crimes and misdemeanors. they have not demonstrated any law was violated, and the president was entirely justified in asking for an investigation of corruption concerning ukraine and potentially hunter biden and joe biden it at the end of day there may or may not have been -- >> have to see this last hour -- [inaudible question] >> look, there's a shadow over
10:03 am

the presidency, is the last several months of sham proceedings in the house where the only heard from prosecution witnesses, and they ignored the very substantial evidence of corruption with the vice president going to the very top potential of the administration. the obama administration pointed out the conflict of interest over and over and over again, and so did the press until the press decided to defend the house democrat partisan impeachment attack. this has been a sham from the beginning here presidents have the authority to investigate corruption and there was overwhelming -- >> the one to one witness question -- >> a look at the witnesses who will be a one for one or two for two. i sat to this last hour and those most powerful presentation on either side. what it gets at is that the president had every right to look into corruption because he
10:04 am 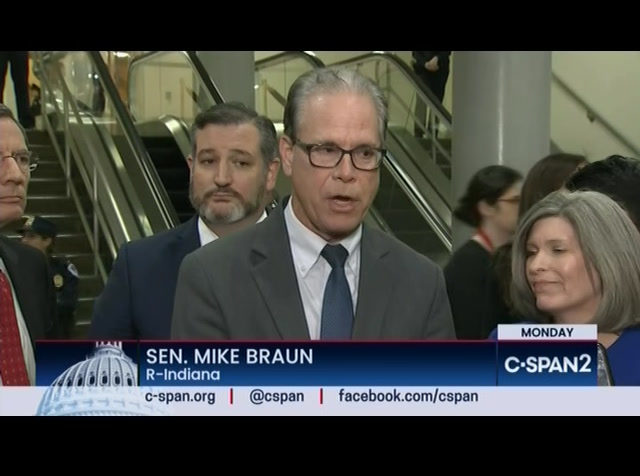 did such a good job of comparing what was overlooked during the obama administration and how thick the bidens were involved. in fact, the main take away from this is i'm sure now, they mentioned the bidens 400 times in the presentation. it's probably the vice president worst nightmare how this has risen to the profile. >> that's what it boils down to, not quid pro quo but the fact he asked for a favor from ukraine. >> did you watch the video of barack obama -- >> barack obama -- issue was today. we're coming down here, we're coming down here to tell you that we just spent the last couple of hours and we're all here senators to talk about this and what we will tell you is what we just seen in the last couple of hours and what we saw in the last couple of hours and ukraine. one on the issue of obstruction
10:05 am 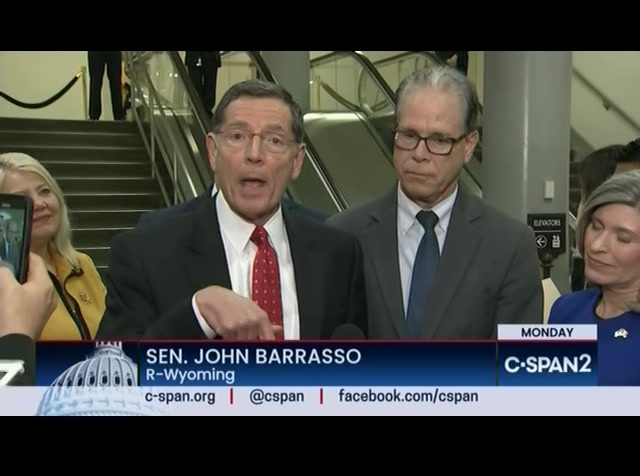 of power. obstruction of congress and abuse of power. the argument on abuse of power which is one of the two articles of impeachment, we spent a good hour going over what that actually means. the supreme court, we understand this. i thought the most telling thing on that one of the two articles was the tape plate of chuck schumer explaining to the country back at the time of the clinton administration that abuse of power, that the president has an obligation to protect the presidency. and in terms of the three branches of government and protecting his branch, the president has an obligation to do that. and using executive privilege is part of that obligation. we're clearly in favor -- [inaudible question] are those senators and perhaps
10:06 am 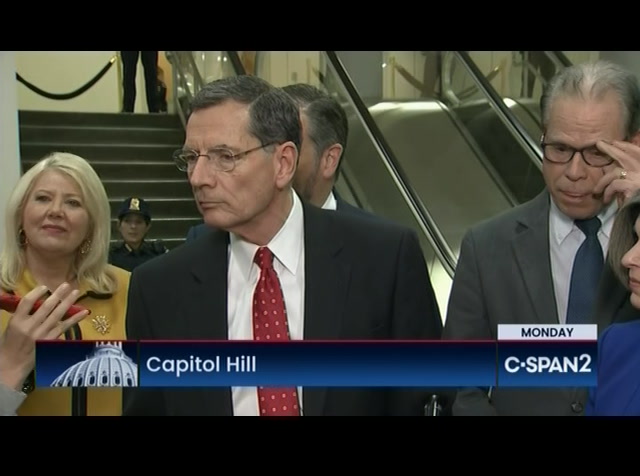 two is looking at that also -- bringing what is over that perhaps republicans, are you all united in that. >> was asking about witnesses. will decide friday on what is it but it's not going to be a one-sided issue. we have this evening, tomorrow for the president k to be present. with 16 hours of questioning on thursday -- wednesday and thursday and then ultimately the question will come have we heard enough, are we ready to go to final judgment or do we need to hear from more people? if we give more people it's going to be a group of individuals but 51 senators make the decision on friday and not before friday regard us of what question to ask. >> well, one of the final points that was made was very, very good and that why are we impeaching this president? what is the house managers objective in this? i think the white house counsel has done a brilliant job in
10:07 am 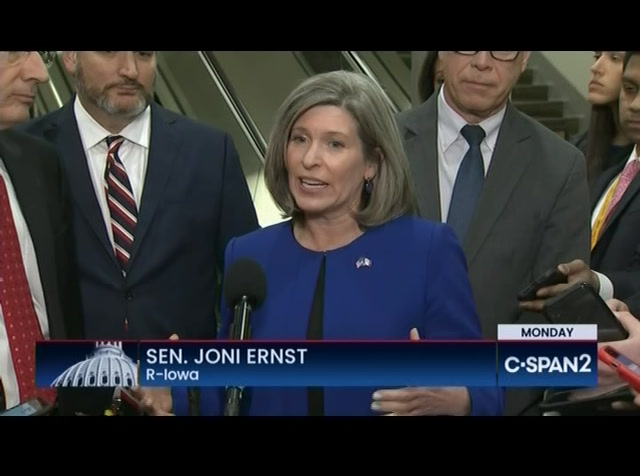 really treading house managers case, and they have done it by using established law and the constitution. i mean, they have spelled it out to where not putting in fluff stories. they're not talking about -- when i was a child and i grew up to be a judge. i mean, when not talking about -- they are presenting the law. what i've seen our house managers do and other democrats is take that constitution, threw it on the ground, from right under the bus and, oh, by the way, let's not just don't under the bus, let's put it in reverse and do it again. but why are they trying to impeach and remove this president? is it because they know that he will be reelected this fall? the point that was just made in this last 30 minutes or so was that we have record unemployment here in the united states. we have a booming economy. people in iowa are thrilled that we have the u.s. mda -- usmca
10:08 am 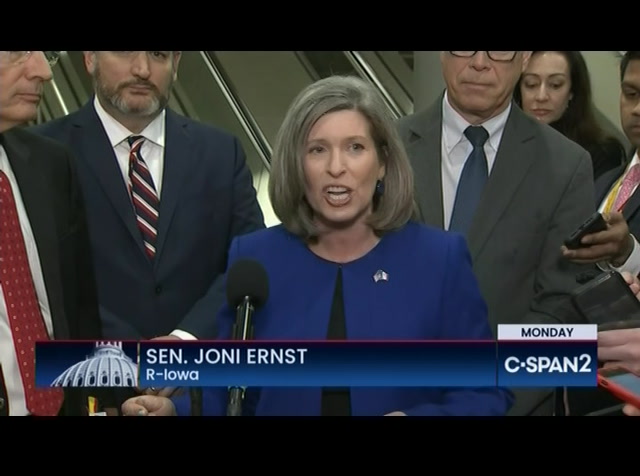 being signed a a trade deals wh china. there is so much going on good and positive for this country and the democrats hate it that we have a larger-than-life president that has achieved that. >> would you like to see witnesses? >> i think we have heard -- we have heard evidence, evidence picked the house managers cut and pasted here and there to make it seem one way or another. the white house counsel has put that entire conversation by each one of the witnesses together and have disproven all the innuendo and gossip that the house managers based their case on. >> two yes or no, witnesses? >> we have had yet another daye of discussion, from white house counsel. never own questions will ask and then we will make that decision, but at this time again the white house counsel has absolutely
10:09 am 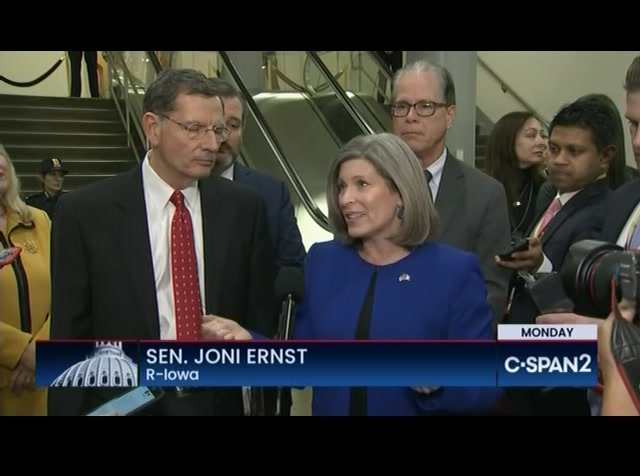 shredded, shredded the case brought forward by house managers. >> the final issue, the people, everyone was paying close attention for the discussion about the bidens with the four peoples eyes whose eyes were idle elizabeth warren, michael bennet, ernie sands and amy klobuchar lanie ford. never seen them all so attentive as when the discussion was on joe biden. >> iowa caucuses, folks, iowa are this next monday evening. i'm really interested to see how this discussion today informs and influences the iowa caucus voters, the democratic caucus goers. will they be supporting vice president biden at this point? >> we are going to wrap it up. the last hour was the crux of the trial. so i would really suggest there were more people listening and paying attention in the last
10:10 am 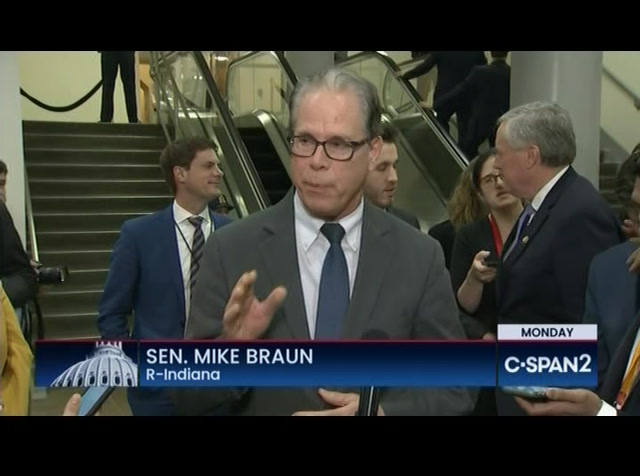 hour i think close the deal. so i would look at that and it was impressive. >> you call it fake news but -- >> i don't do that. >> by this administration has. >> that's okay. >> a number of reports in the defense today. do you think that's fair to call it -- >> all i can -- i don't use those terms or words, but the president can choose to continued use and if he wants to. all i can tell you is part of the trial that i think made the difference and you want to bid careful to it, with the last hour. it was just breathe a deep and we'll get to the question of witnesses and we will cross that threshold on thursday or friday. >> so from the perspective of the impeachment defense team we feel really good about the progress thus far. you just heard from collection of senators there, at a think they're let their opinions they
left
right
Borrow Program
tv

Following a break in the Senate impeachment trial, Senate Republicans spoke to reporters about the President's legal team's presentation. Senators agreed that the defense team's presentation of information about Vice President Joe Biden's son, Hunter Biden, and his role on the Burisma board undermined the House manager's case against President Trump.