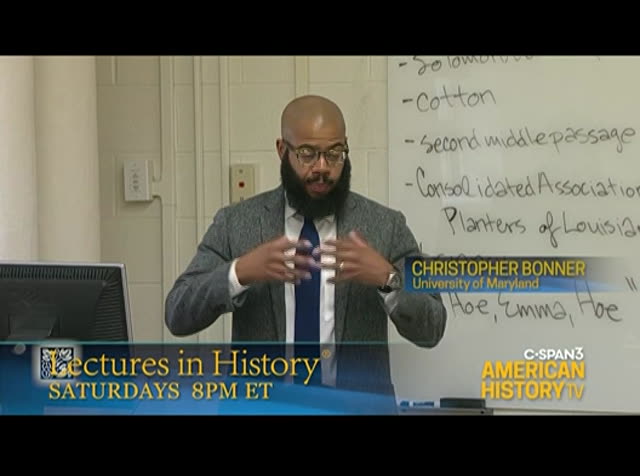 these sides of the story here, right? the tools, techniques of slave owner peern also talk about tools and techniques of power that were practiced by enslaved people. >> watch history professors lead discussions with their students on topics ranging from the american revolution to september 11th, lectures in history on c-span 3 every saturday at 8:00 p.m. eastern on american history tv and lectures in history is available as a podcast. find writ you listen to podcasts. next medical service in the invasion of normandy. this program details the logistics involved in treating wounded soldiers in the field and in hospitals in england during he and after the d-day invasion of france on june 6th, 1944. from the national archives collection the film was marked restricted because of its graphic scenes of the wounded and was originally intended for
11:26 am 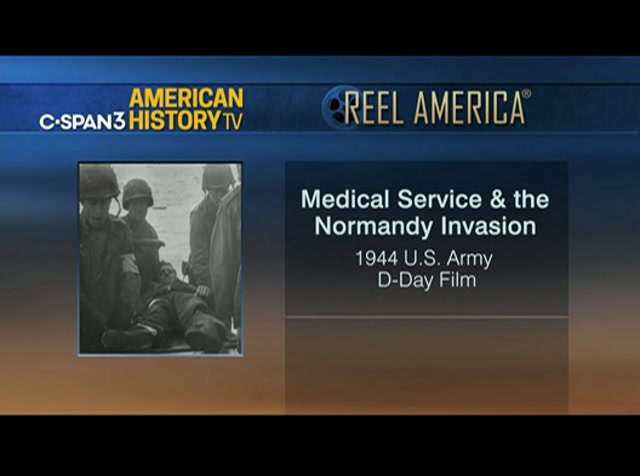 military audiences only. ♪ >> this is england. england before june 6, 1944. from these shores the united nations were soon to launch the greatest military expedition of its kind in history, an across channel invasion of europe against the nazi power. vast preparations were being made, huge quantities of material and supplies collected, guns, half tracks, bombs, ambulances. yes, ambulances.
11:27 am 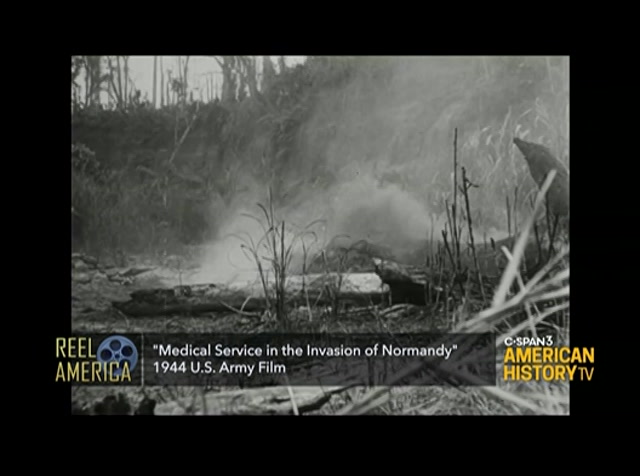 we are in the midst of all this preparation and this training for destruction that went on an opposite kind of preparation, preparation for the business of saving life, preserving limb, of easing pain. through the endless english months of war games and maneuvers, the medical corps man of the ground forces worked with their units. they grew tough and inure to battle conditions, they learned the primary importance of speed. as the day drew nearer and the grand strategy was mapped, the medical corps drafted its plans to fit. the disposition of hospital facilities in england would be as follows, in the north scattered over a wide area the general hospitals, large institutions completely equipped for every type of medical service. a few miles inland from the south coast, spotted near
11:28 am 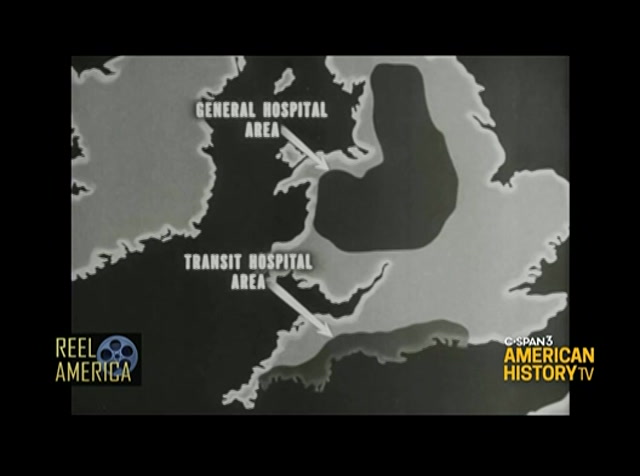 railroads, would be a series of transit hospitals through which would pass all the casualties arriving in england. they would be routed to the general hospitals and along the coast close to the beaches and ports in each receiving area there would be holding hospitals, fully equipped for emergency surgery. here serious cases could receive attention immediately on their arrival in england. these were the plans and this was the reality. the general hospital, the transit hospital, the holding hospital. better equipped than many permanent institutions back home. the tents stood empty, ready, waiting for the day. june 6th, d-day, the great plan is put to the test.
11:29 am 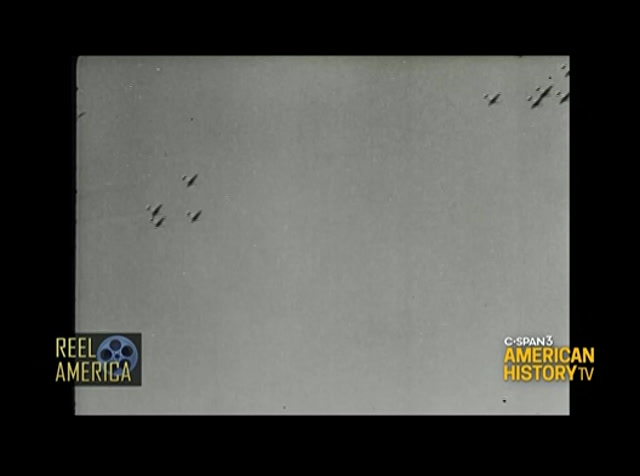 the enemy lies in wait, is determined to stop us as we are to land. the first american soldiers hit the beach. [ gunfire ] the medics have moved in with them and their work begins. aid stations are established on the spot and an astounding record starts piling up. a checkup later reveals that 80% to 90% of the wounded received medical care within ten minutes of being hit. immediately the business of evacuation begins.
11:30 am 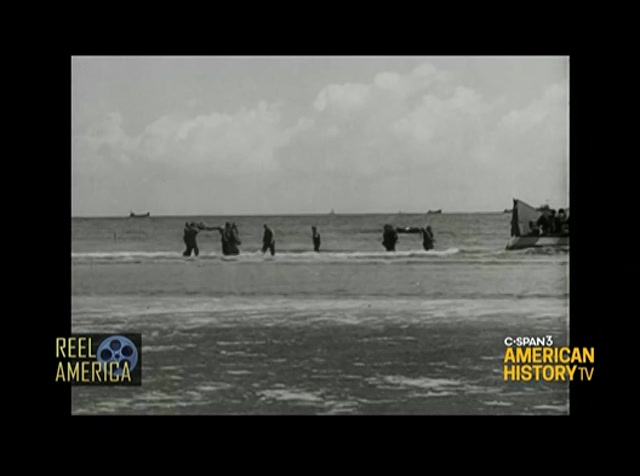 worst wounds get first priority. right back they go to the boats that landed them but a short time before. this is part of the plan, where the lsts are unable to come in close enough the smaller craft are used in order to get the wounded to them. so the ships receive their damaged human cargo for the trip back. all along the beaches they wait as the fighting develops, every means is used to hasten the removal of the wounded from the scene of battle. the jeep of all trades is pressed into service and proves itself again. and the duck sets out with its load of wounded. through it all the slogan of speed remains the keynote.
11:31 am 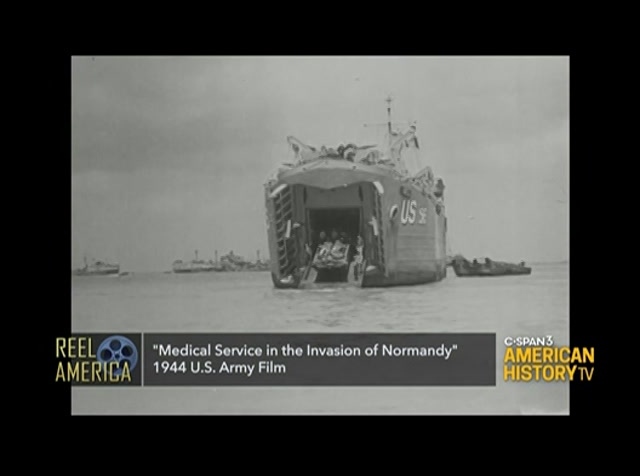 the lsts used in the normandy invasion were designed to become emergency hospital ships as soon as their fighting cargo had been deposited ashore. in the hold wall brackets were installed, each lst could accommodate 250 patients and 90% of the wounded were evacuated on these ships. a smoke, a drink of water, trophies and rest. the dead rest of exhaustion. elsewhere on the ship a life is being saved. some wounds can't wait so planning included an operating room on each lst and an experienced army surgeon to augment the regular naval medical staff. soon it will be england again
11:32 am 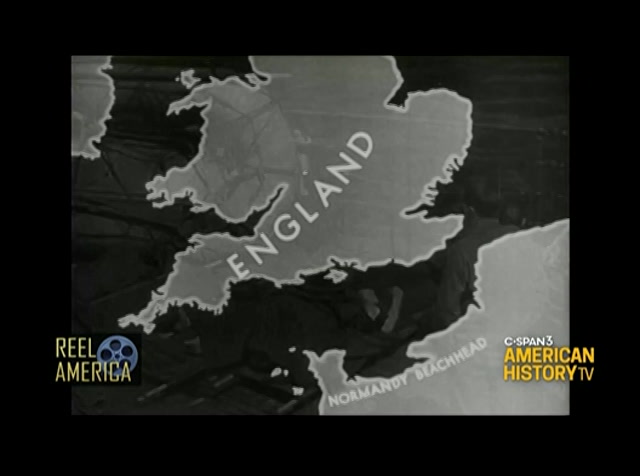 and rest and care and safety. the routing of the ships had been carefully planned to avoid congestion at any one landing point on the english coast. as each ship disembarked their wounded those cases needing immediate surgery were moved to the latest holding hospital. as soon as they were transportable again they were moved inland to the transit hospital serving the area. all other cases, and these were in the great majority, were moved directly from the landing point of the transit hospital and from there were routed by special train to the north. every preparation for these moves had been made, ambulance companies strung out all along the coast were under the control of evacuation officers at each receiving area. 5,000 of these vehicles stood by ready for immediate service. the ships start coming in, some to ports, some to piers and
11:33 am 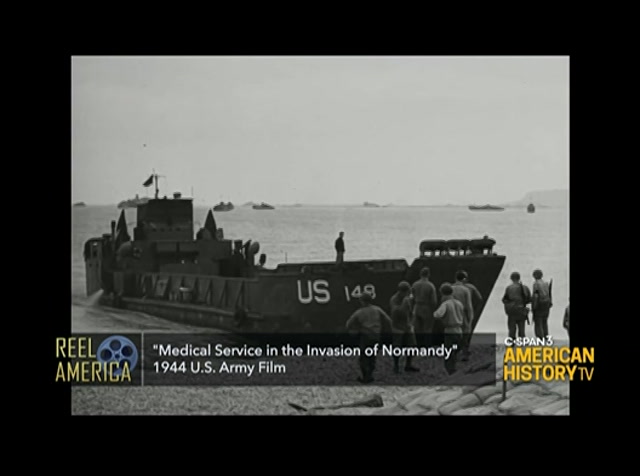 outlying areas, others pull up directly on to the beaches. >> no time is lost in moving out the wounded, especially trained sanitary companies take over the litter jobs and the business of unloading begins. evacuation officers supervise. the disposition of each litter case has been decided. and so man helps man and american teamwork proves itself once more and the job is shortly done. the emergency cases move out first. often it's only a matter of minutes before a dangerous wound
11:34 am 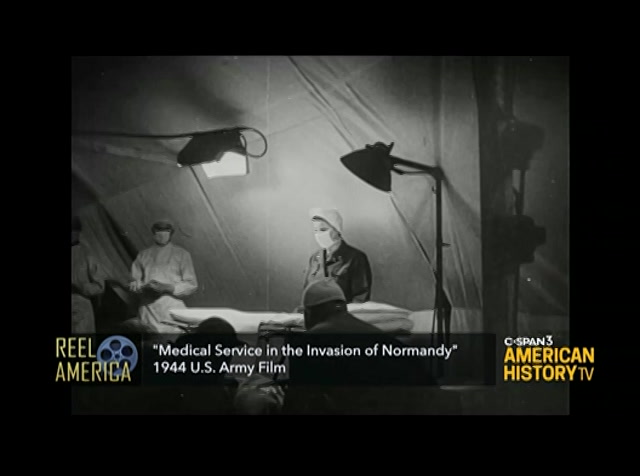 has been x-rayed, a decision made and a patient readied for surgery. >> soon after the operation and it's safe for him to travel. he's moved out and sent off to the transit hospital. in normandy the fighting moved inland. last war and a soldier was wounded just had to watch and wait until an aid man found him. now the order is reversed, the aid man does the watching and waiting and is at the side of the casualty as soon as he becomes one. in addition, the american corps men today are like his counterpart in previous wars, is
11:35 am 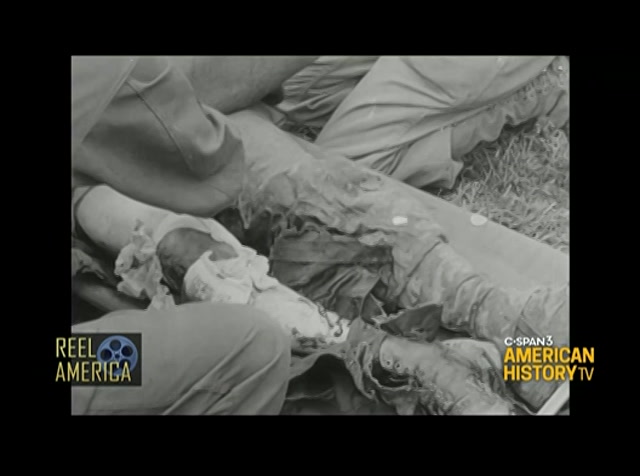 qualified to administer morphine and plasma and render numerous other services to the wounded. all this is making a vast difference in the saving of life. some of the wounded filter back to the aid station on foot, but evacuation by walking and hand litter bearing soon gives way to the faster method of evacuation by jeep. the battalion aid station operates just behind the lines. here the trained corpsman again demonstrates his value, taking over many jobs that the physician would have to perform, this frees the doctor's time to more detailed attention to the serious cases.
11:36 am 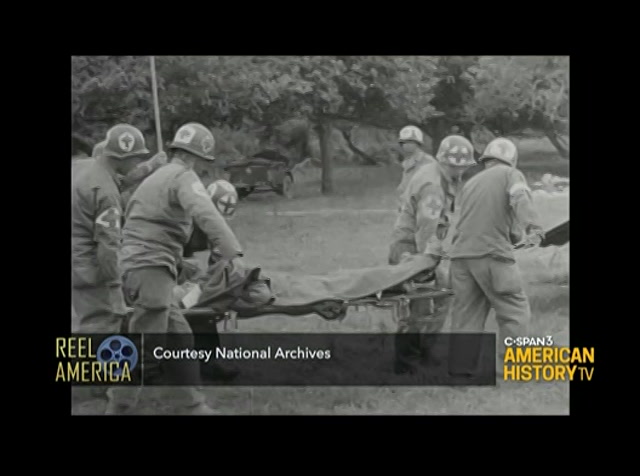 >> next the wounded are brought to a collecting station a while or so farther back. there are facilities here for further emergency treatment, if needed. but the primary job is the transporting of the wounded with all possible speed to the clearing station. this is located far enough to the rear to avoid exposure to direct enemy action. here medical officers expert in judging the condition of casualties sort the patients and determine their disposition. urgent cases needing certain specialized type of surgery are turned over to the field hospital which is set up close by. the great majority of operations here are for perforating abdominal wounds, sucking wounds of the chest like this one.
11:37 am 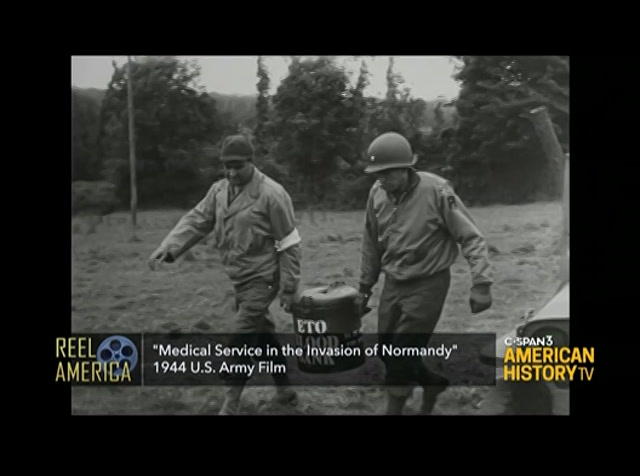 whole blood flown in from england consolidates the gains that been made by lifesaving plasma at the front. on d-day plus 4 the first evacuation hospital goes up in france. this is the largest and most elaborate type of tent installation used in the combat zone. nevertheless, it's ready to receive patients within 30 minutes and operating starts in two hours. three of them going on at once. count them. skilled army nurses look after the patients. there are such comforts as cots and mattresses and hot food. many of the less serious wounded will make complete recoveries here and report to replacement depots in a couple days. cases involving prolonged
11:38 am 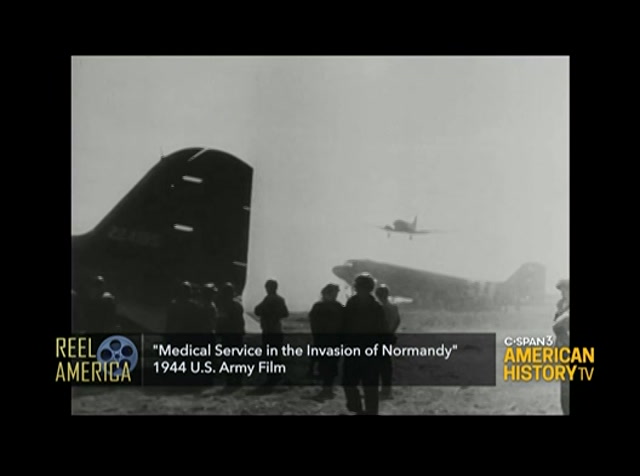 convalescence are sent back to england. plane evacuation expected to begin about d-day plus seven has actually begun on d-day plus three. within a fortnight we're flying out more than 1,000 wounded a day and sea evacuation has been almost entirely supplanted. >> the air trip from france to england takes about an hour. speed has won another triumph and it becomes a common occurrence for a soldier wounded in france in the morning to be resting in a general hospital in england by evening.
11:39 am 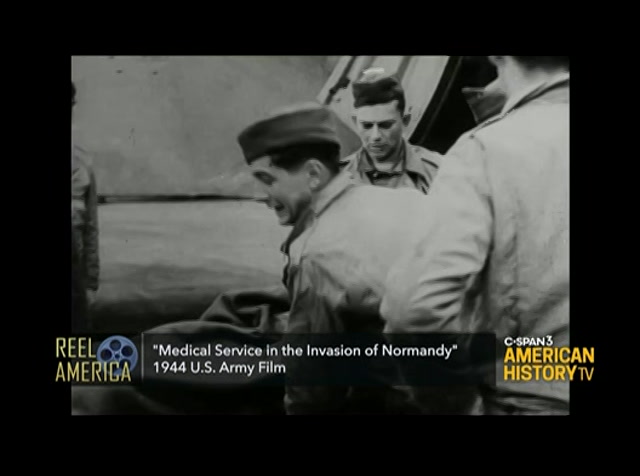 >> from the landing field the patients are shuttled to the transit hospital and before long they are boarding the hospital trains that pull out daily from nearby railways for the trip north. and the last leg of the journey begins. the general hospitals are telling some remarkable stories these days, like 16,000 casualties handled by one group and only 15 deaths. what is making such records possible, of course, is the fine condition in which patients are arriving due to the splendid work of units all along the
11:40 am 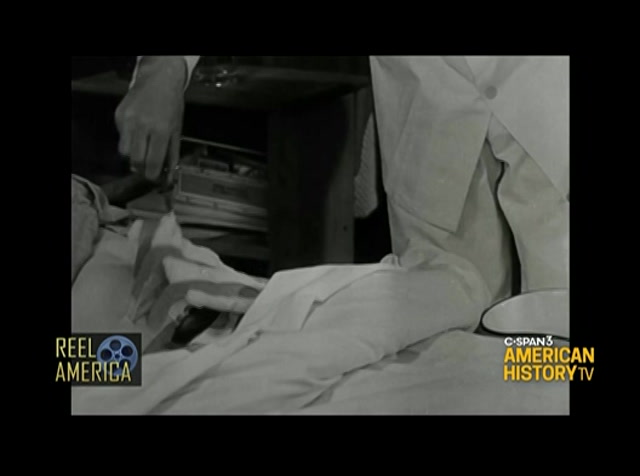 line. in the first two months of the invasion some 76,000 wounded were handled by the medical department. in world war i 8% of these men would not have survived. today less than 3% are being lost and many who would have been invalided for life would be totally healed. so the careful planning of months bears fruit and men who knew the battlefield but a few short hours back knew the pain, the suffering, now know the care, the comfort and the hope that the best in modern medicine can bring. every saturday night american history tv takes to you college classrooms around the
11:41 am 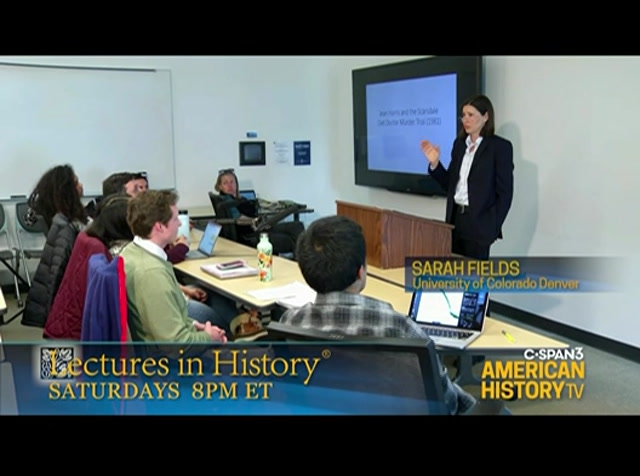 country for lectures in history. >> why do you all know who lizzy borden is and raise your hand if you ever heard of the jean harris murder trial before this class. >> the deepest cause where we'll find true meaning of the revolution was in this transformation that took place in the minds of the american people. >> we'll talk about both of these sides of the story here. sfliegt the too the tells and power of slave owner power and power that were practiced by enslaved people. >> watch history professors lead discussions with their students on topics ranging from american revolution to september 11th, lectures in history on c-span 3 every saturday at 8:00 p.m. eastern on american history tv and lectures in history is available as a podcast. find it where you listen to podcasts. next on american history tv's reel america, a look back at historic campaigns, the 1972
11:42 am 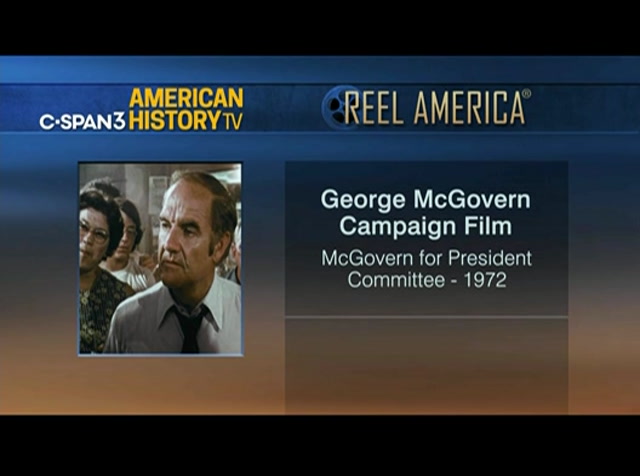 film candidates journal follows democratic presidential nominee senator george mcgovern of south dakota, as he meets with voters from across the united states. he hears from a baltimore steel worker, a senior citizen, a wisconsin farmer, and an out of work engineer and a wheelchair bound vietnam veteran. george mcdorch lost to richard nixon winning only district of columbia and massachusetts. planes and helicopters both american and south vietnamese -- >> during the past two years i have found that campaigning can be a lonely business. a succession of airports, motels, not seeing my family for
left
right
Borrow Program
tv

This U.S. Army film details the logistics involved in treating wounded soldiers in the field, and in hospitals in England, during and after the D-Day invasion of Normandy, France on June 6, 1944. From the National Archives collections, the film was marked "restricted" because of its graphic scenes of the wounded and was originally intended for military audiences only.