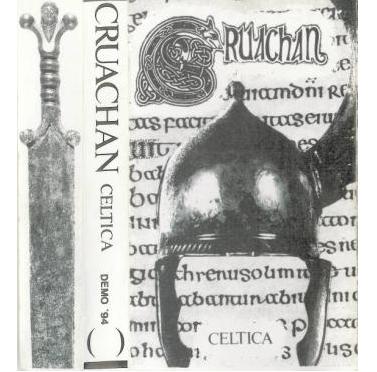 
Thanks to Keith Fay for giving me permission to upload the demo to the Archive.

"The voyage of Bran" is a slower early version of "The Children of Lir" from the "Folk-Lore" album.

Also included here is a rehearsal recording of the track Cúchulainn (The Hound Of Culann) from 1995.


Biography taken from CRUACHAN official Website and Myspace...
CRUACHAN combine modern rock /metal with traditional Irish music, but there is a lot more to them than just that: elaborate classical pieces, ancient medieval tunes etc. They also use real instruments rather than relying solely on a keyboard or sampler. The use of these instruments also adds an element of curiosity in live shows due to each member's ability to play a variety of instruments. Some of the traditional instruments they use are: Tin whistle, Irish Flute, Bódhran (an ancient hand-held goatskin drum), Uilleann pipes (or elbow pipes, like the traditional bag pipes, but instead of blowing, a bellows is used to pump air into the bag), Harp, Bouzouki (originally a Greek guitar, it has been adopted into Irish and Scottish music) CRUACHAN 's original metal style could have been classed as Black metal, but the band have now opened up to other styles of metal and rock, although the black influences are still evident and the whole ethos is still there. CRUACHAN consider themselves as modern day bards or storytellers. They tell the old Celtic myths and legends of their proud past like the ancient Fili did before them, or the tales of hardship and rebellion that Ireland endured, through the medium of music

CRUACHAN were founded in 1992 by Keith Fay, John Fay and John Clohessy. With a love of Celtic music, history and mythology, they sought to incorporate this into their music and lyrics, on a scale that had never been done before. With a line-up playing a variety of Irish traditional and conventional metal instruments they released the 'Celtica' demo in 1994, in this year they signed with Nazguls Eyrie Productions from Germany and released their debut album 'Tuatha na Gael' in early 1995. The album suffered from poor sound and production as the band were new to studio recording. Regardless, the album became by far the number one seller for the label despite selling out quickly in the few shops it was available in, not being replaced and not being promoted. As a result a lot of people who read the excellent reviews could not get their hands on it. CRUACHAN went into studio again in early 1997 and recorded a four-song promo with a new female folk singer (Aisling). The new material was a lot more heavy rock orientated. The promo was for record labels only.

Century Media Records showed a lot of interest in 1997 and arrangements were made for a signing. We left N.E.P. and negotiated with Century media. Unfortunately this deal never materialised. CRUACHAN continued writing and playing, not only to metal audiences but in Celtic festivals and with internationally renowned acts to a variety of people.

In January 1999 Keith and John Fay decided it was time to source a fresh record deal as fans kept writing asking about the possibility of a second album. Hammerheart Records from Holland were keen to sign them, in October 1999 the deal was sorted and CRUACHAN began recording their second album entitled 'The Middle Kingdom' in November 1999, this was released in June 2000. During this period CRUACHAN played shows extensively throughout Ireland.

'Folklore', CRUACHAN ’s third album was released in 2002 to huge acclaim. It was recorded by and features vocals by the legendary Shane Mc Gowan of THE POGUES. The single 'Ride On' reached number 40 in the Irish charts. It received high marks in all the top Metal Magazines (Rock Hard, Legacy, Aardshock etc.). With this album CRUACHAN toured Europe and headlined festivals in both Germany and Norway.
'Pagan' is CRUACHAN's 4th studio album and was released in April 2004. Again this album has been regarded as a breakthrough in folk metal and once more received fantastic reviews. The cover artwork was painted by John Howe, the artist from The Lord of the Rings movies. Since Pagan’s release CRUACHAN have performed all over Europe including 2 Headlining Russian tours and 1 headlining European tour in 2005, to date they are the only Irish band in history, metal or otherwise, to have toured Russia.

In 2005 CRUACHAN signed with AFM records. Their 5th studio album 'The Morrigan’s Call' was recorded by Gail Leibling from GAIL OF GOD! As of our latest sales statement in February 2009, 'The Morrigans Call' is also our best selling album to date.

CRUACHAN left AFM in early 2010. At this time vocalist Karen Gilligan left the band and they decided not to replace her and return to their roots and create extreme folk metal music. They recorded a 3 song demo which was only sent to a select few people. A recording contract was sorted with Candlelight records in summer 2010 and recording of their latest album 'Blood on the Black Robe' began in November 2010. And was officially released on 18th April 2011.