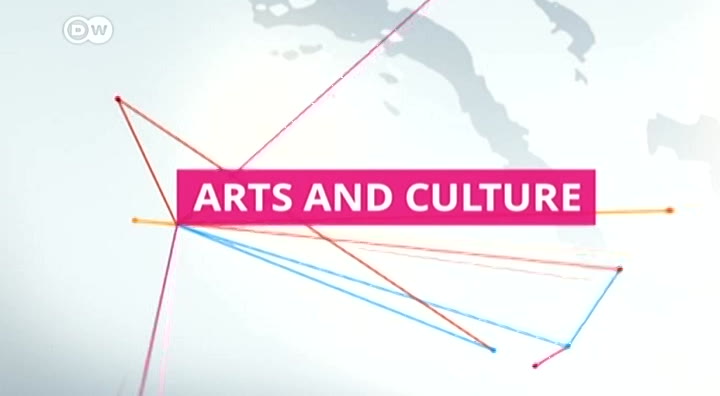 welcome to news from the world of arts and culture the whistleblower chelsea manning has a documentary film all about her that's just how its world premiere we'll be talking about that also coming up. works by stars of the congolese are seen on show in a museum in southern germany. and we visit a company that's made shoes out of coffee fish and now. we began to try back a film festival in new york renowned for showing cutting edge independent films they just tell the world premiere of x y chelsea a documentary about whistleblower and activist chelsea manning the director tim travers hawkins got incredibly close to the complex character of the walls u.s.
4:03 am 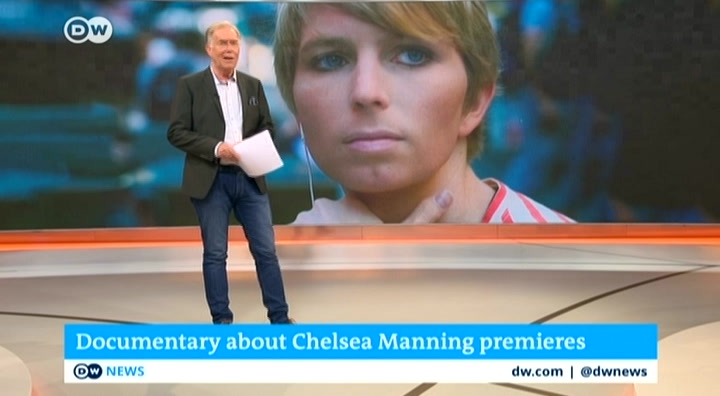 soldier bradley manning who leaked a huge amount of classified documents to wiki leaks was sent to jail and there started transitioning to a woman quite a story. that is. what story. her question. you're right i'm not. i do not lie while. i'm out of bed go to hear. oh. it was this endless stream of violence and death and destruction.
4:04 am 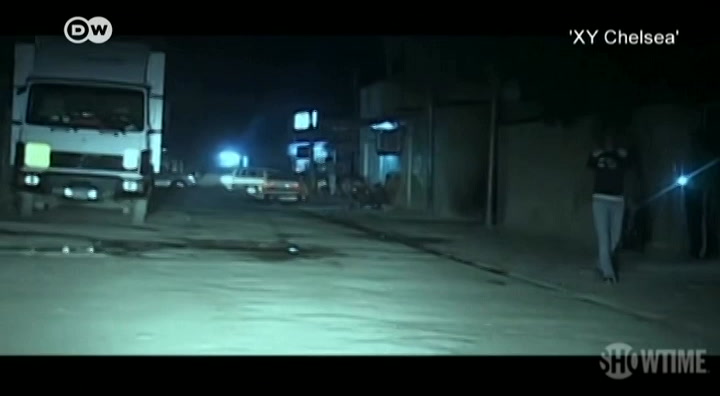 and life you feel to know things i honestly. they are all these documents and. one. manning stood up as an american soldier would him self in harm's way and he should be free. country wanting to know why i. want to marry him and i don't want. these rumors is she cannot be high she's transgender i'm the same person as i was just. years on. how different. industries are feels like life isn't looking at me. i still have battles with the knowledge of economics surprise the political world this week by announcing she was running for the u.s.
4:05 am 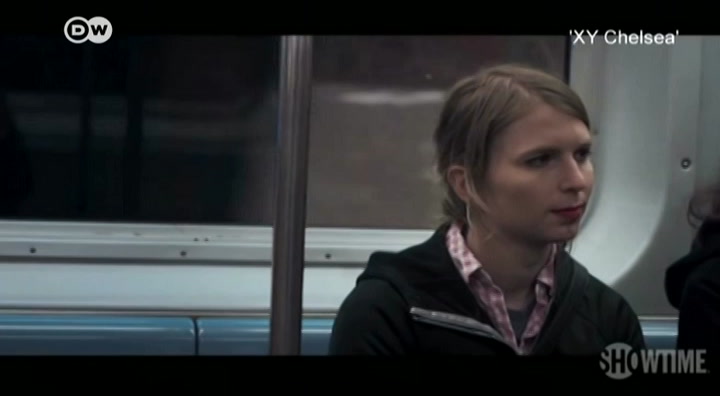 senate told me. there and i knew her near and i can't stop the car you know how fragile she is of. her side of her state of uncertainty as to why. i'm not placing people thinking. looks intriguing market group is here to talk about this. she says i'm not the person people think but she does put herself in the public spotlight regular intervals i mean so who is chelsea manning well as you already such she is a very complex character and the documentary follows her after her release from prison and twenty seventeen and until then we didn't know much about her as a person but tim trevor hawkins the director was able to get really really close and so we get an impression of this young woman who was once a soldier and then the whistleblower and a double agent as some say the film shows that she very often doesn't quite know
4:06 am 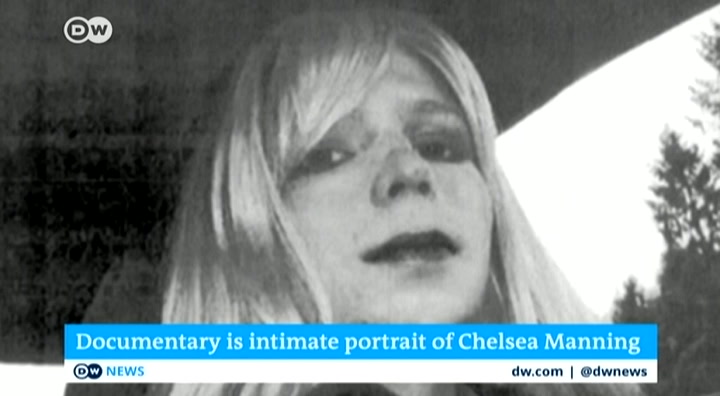 how to position herself in public and personally i can't get enough of this picture i'm really endlessly curious because the film shows how fragile she is really and on the other hand she's so incredibly strong because we all know what she went through. now her transition from man's woman was difficult for some people to accept so do you think it actually undermined her credibility maybe it did for some people because she said that she struggles from a very early age with a gender identity and then she found her way to accepting herself as a trans woman in a military prison so it's really hard to understand for some people and then compared to what snowden on julian assange she was not this kind of hero my guess so when we remember until the rape charges that were made against the phone and
4:07 am 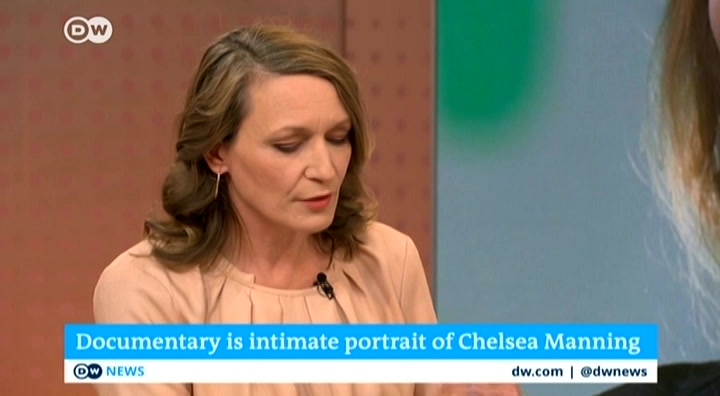 after his dramatic arrest he was really a bit of a superstar in certain circles as the man who took on the most powerful country in the world but. chelsea manning. what was the reaction to the film there were mixed critiques but try back out so it was quite sad actually because the main protagonist couldn't even be there. in chelsea manning is currently back to prison because she is refusing once again to testify to a grand jury against wiki leaks and barry will read about it she's on the rubble but well she still sticks to her guns well it's going to be a lot of sort of attention for this film because of judy in a song being released just about it but i think salute like that krueger thanks very much. now with all the talk in recent times of looted african art here in
4:08 am 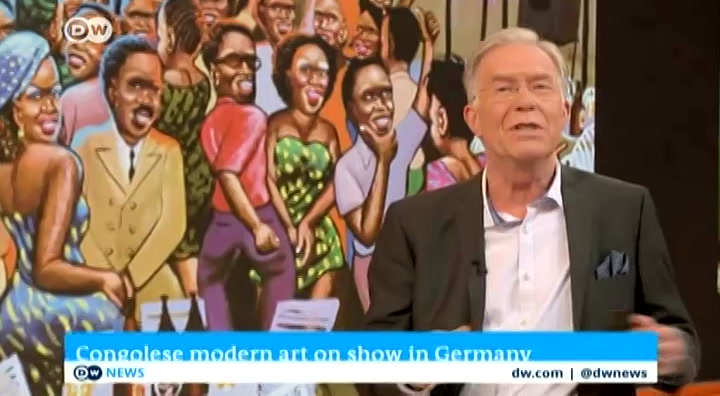 europe that needs to be returned to its rightful owners it's nice to see museums in your cooperation with african museums for an exhibition of african art in germany southern german city of tubingen as an exhibition featuring congolese art from the nine hundred sixty s. to the present day. designer shoes and the clothes to go with them but this too is africa as reflected by artists from the democratic republic of congo. they portray people whose outfits bring color to daily life and allow them to dream of escaping poverty into a life of luxury. the fighting in the streets of the capital kinshasa people who see no escape from the violence here flee the country like the father of video artist michelle my game with her installation she dives into her past when she was six years old her family emigrated to france. my
4:09 am 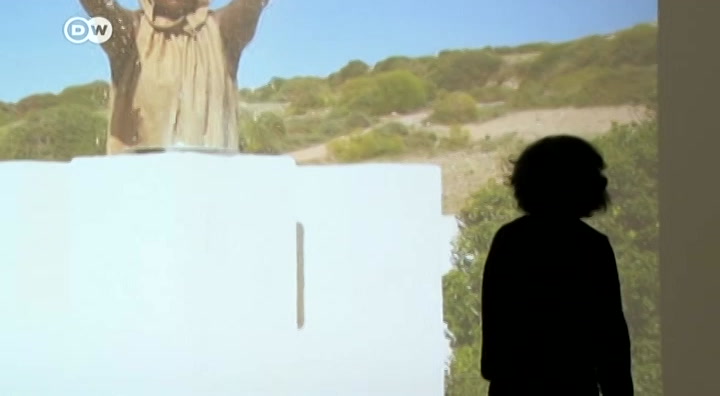 father it was really and engage you know in the context of took critics and he wanted to coming. up you know to try to change something in congo so it was political over features and when i was younger and i asked myself ok what we're going to do and i choose art because i mean as an artist we have the. freedom to tell things to our position to try to change the world. when mobutu sese seko was in power the democratic republic of congo was still called zaire the president's grandiose self promotion couldn't hide the human rights abuses and hunger problems the poverty stricken country still struggles with today as always it's the powerful who earn profits in congo and these days it's not
4:10 am 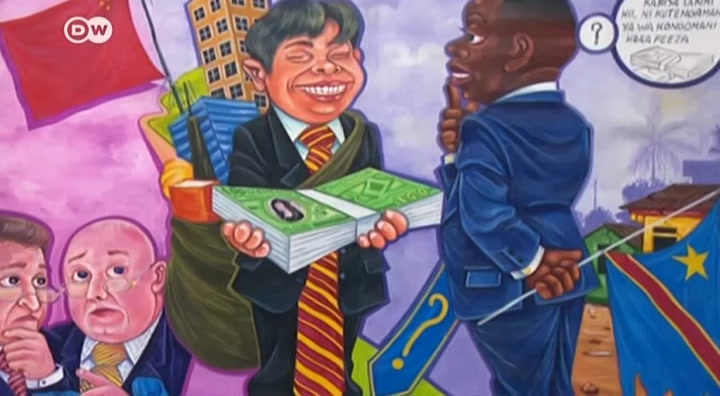 just europeans but also the chinese exploiting the country's natural resources during the colonial era it was belgium. so belgian slack to take pride in the infrastructure that he believed. as a matter of fact. that basically to exports natural resources and so this is something which. continues with chinese for instance who also like the belgians and previously doing it can only the colonial period invest heavily in setting up this kind of infrastructure but again with the same purpose how can anyone escape from this trap is there a way out. these artists look for answers in cartoon like works the dream of prosperity is reachable for only a few people in congo women are often the victims of violence with few opportunities for self advancement in this male dominated society. michel my game
4:11 am 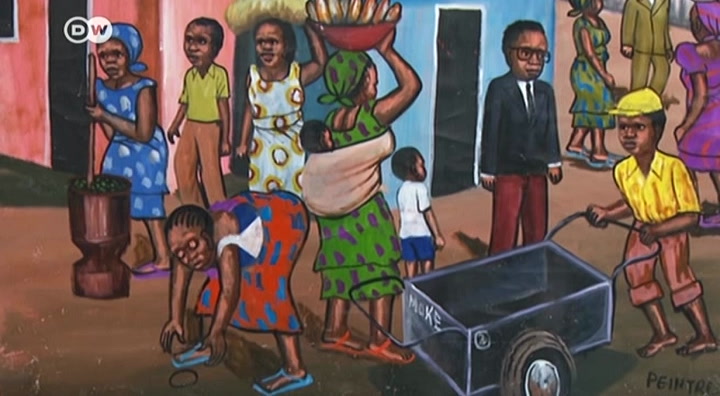 now lives in paris and she's already had an impact with her art. when i started out as a woman. i was. the one only woman now. woman you know the young generation they make this choice not is a choice they made a choice to become a woman artist and i think. it transcends. she certainly did now there's a company in munich which specializes in creating shoes from sustainable materials it's a family that has been making shoes for over one hundred sixty years and that too is the latest innovative brand not too has made shoes out of mushrooms or milk and sneakers from bubble wrap or other minium and now with the help of a burden company they're making sneakers out of star. these
4:12 am 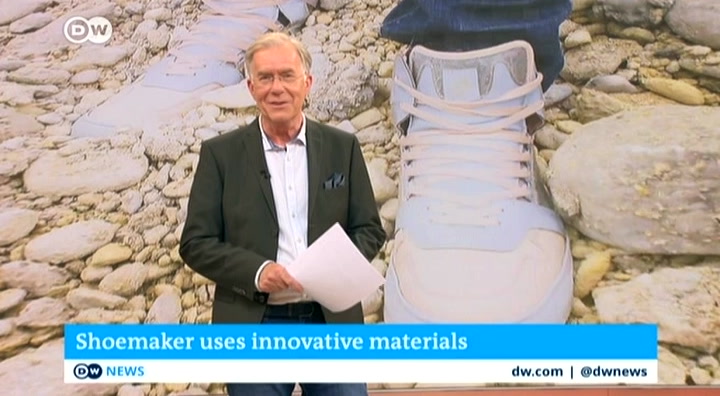 shoes are made with stone it's flexible slate which is used here for parts typically made for much. there from the sustainable luxury brand now to from munich sebastiaan teases the footwear brands founder his family has been in the shoe business for six generations but even for him working with stone this news. is one of them if you want it's hundreds of millions of years old all natural and each pair is unique because technically speaking it isn't superior to leather because some of the shoes are a bit less robust so you shouldn't wear them in siberia at minus forty degrees celsius but they're perfect for normal day to day purposes. the process of making stone flexible enough for shoe making starts with huge blocks of marble or slate using a special technique very thin slabs or sawn off which are then glued onto a flexible material. the method was invented by berlin based company rockslide
4:13 am 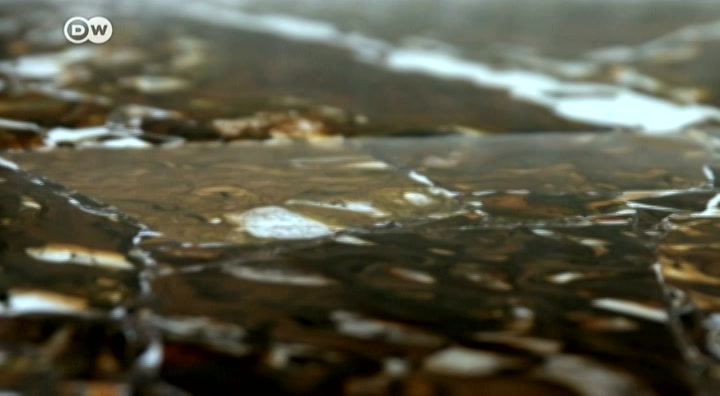 which collaborates with sebastien teams. to fix the beauty of the spine of the heisman i think the stone becomes flexible if you make it very very thin we're talking less than one millimeter thick and then combine it with something stabilizing. the stone is then exposed to heat and cold alternately to make it even more flexible but that process is a trade secret by the end it can even be stitched. along with the shoes there are also stone belts sunglasses and backs but there are limits to the usability. this is a. small when it comes to stone t. shirts jackets and such it gets complicated we've experimented with those kinds of items but other materials offer different breathability and range of motion. it's also going to stay expensive and labor intense so it will probably stay more niche
4:14 am 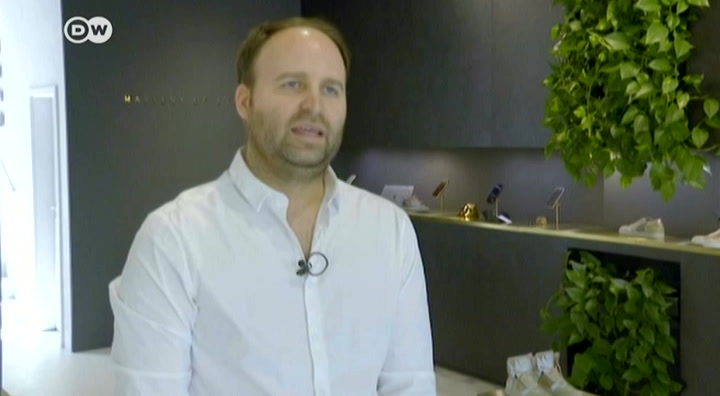 than mass market. sebastiaan tes had been looking for any again and again he tested unusual materials for she like leather made from tender fungus a treat parasite. and strong from bulgaria and austria. but also coffee. milk. wood. and fish skin have all been tested as potential sneaker material. it seems sebastiaan t. s. will keep walking the innovative line in his shoes made with stuff. good luck to him unfortunately those sneakers are expensive but working toward sustainability is worth it so we have to start looking all drop planet that way on that note i leave you but don't forget our web site for more on all those topics d.w. dot com slash culture thanks for watching i'm bob barr fanaa. what
4:15 am 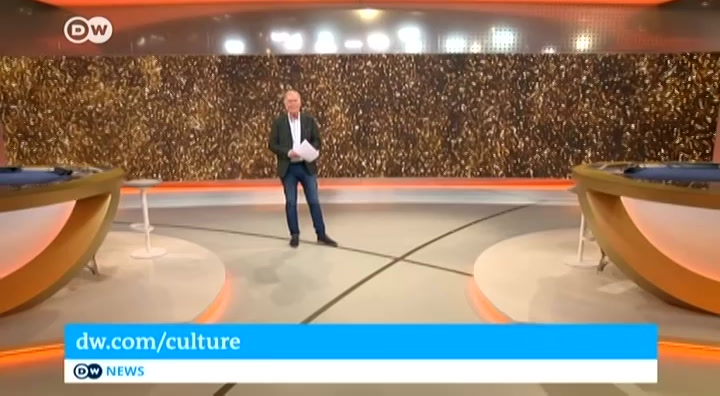 secrets lie behind these moments. find out in an immersive experience and explores fascinating cultural heritage sites. d.w. world heritage three sixty giving up. europe a big idea. but what's become of it. will it look like tomorrow. being for a better future isn't enough in europe requires our conscious sedation. european elections twenty nineteen may twenty sixth on d w.
left
right
disc Borrow a DVD of this show DVD
tv