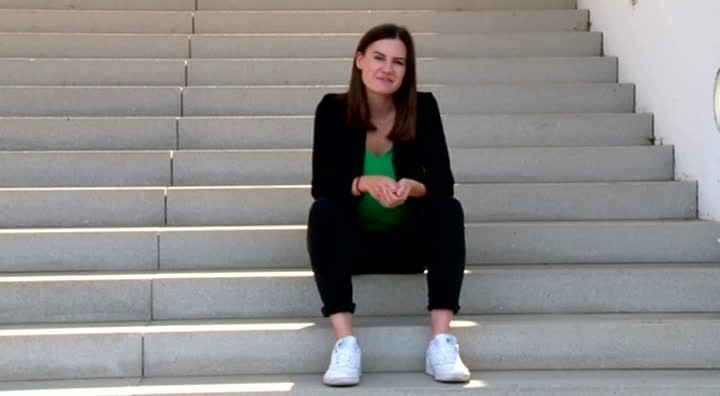 in frankfurt we also have the international auto show carmakers has been investing billions in developing electric vehicles to meet tighter emissions restrictions in europe and in asia and of course to remain competitive as the international auto show in frankfurt gets underway later this week we take a look at the industry's oncet it today stability demands move over a tesla the competition is about to heat up several european carmakers are rolling out new electric vehicle models. is the year where we are probably saying so the big orange red necks mark electric cars you know volkswagen the idea 3 porsche with the take in sports car and then you've also got kind of runaway persia and all these are the 1st showing sold for electric products and concepts mass market means cheaper models like volkswagen's id 3 so more europeans will be able to afford the new electric vehicles until now the continent has lagged behind other regions last year just under 1000000 electric vehicles were sold in asia pacific
7:31 pm

the americas were far behind but still in 2nd place and europe came in 3rd with fewer than 230000 electric vehicles sold. but that could change now with car makers showing the results of the billions of invested in electric vehicle technology at the i.a.e.a. and front foot. and here are some of the other business stories making news. russia's state communications watchdog says u.s. tech giants google and facebook allowed political ads on their platforms during sunday's regional elections despite being asked not to russian law says election ads should not be broadcast on election day but moscow says google and facebook did nothing to stop the run. and an alliance of u.s. states has announced an antitrust investigation into facebook the new york state attorney general says the aim is to find out whether the social media platform stifle competition and puts. use us and risk by endangering their data the justice
7:32 pm

department also say it's it was conduct a competition review off online platforms to the disposable fashion industry is highly controversial ass a to tends to exploit workers and developing countries the collapse of the run up last a factory in bangladesh 6 years ago shock to consume as and europe and a prompted a change of attitude today germany launched the so-called green button initiative a labeling system that aims to help consume us make informed choices about the clothes they buy well lip production whole so modern machinery and happy workers this is the new image for bangladesh's textile industry this factory in the capital dhaka our producers polo shirts for the western market the manager says who they're doing everything to comply with the green button criteria and hopes they'll be certified the company has made a massive investment yet a sticking from the buyout yeah also tested yet if would begin fact
7:33 pm

up that started they mean study but thank you from odd that if style maybe did we concede out on in the from bites of the up or that 6 and a half years ago more than a 1000 workers were killed when the ran up plows of factory and dark ah collapsed after of that the e.u. rammed the us put pressure on bangladesh's textile industry to improve safety that has helped a bit now the country's unions have high expectations for the new certification the what course of the been by consistent com we'll be perry help pull part dar or karst to walk in in good condition this factory know has regular working times better wages higher safety and environmental standards the unions want more companies to work with consumer labels like the green button and open themselves up to scrutiny now he is possibly china's most famous capitalist
7:34 pm

and he rules a business empire worth some $460000000000.00 but jack ma the charismatic founder of e-commerce giant alibaba has announced he will step down as chairman effective tomorrow my found of the company in his apartment 20 years ago and listed on the stock exchange and 2014 in what became the biggest i.p.o. in history will stay on what until his term expires next year. and that is your business update you on g.w. for me and the team in berlin thanks for keeping us company.
7:35 pm

he takes her slowly. with all the wonderful people and stories that make the game so special. for all true friends. played a leg up more than football online birth. poems to millions of species a home for saving. much of those are big changes and most start with small steps global warming tears tell stories of creative people and innovative projects around the world like to use the term the context to stick green energy solutions and reforestation. they create interactive content teaching the next generation about environmental protection and more determined to build something here for the next generation the luckiest the multimedia environment series on t.w.
7:37 pm

respect. this is the news line from british lawmakers forced to leave for a month prime minister boris johnson will suspend. vote tonight but before they go lawmakers are likely to repeat their rejection of his call for a snap election on the program. even after the attempt to ban the n.p.t. he stayed loyal to the party which is close to hitler's nazi party outraged that neo nazi is unanimously elected unopposed as matt.
7:39 pm

welcome to the program the british parliament begins a 5 week suspension from tonight lawmakers will be sent home of how they.
left
right
disc Borrow a DVD of this show DVD
tv