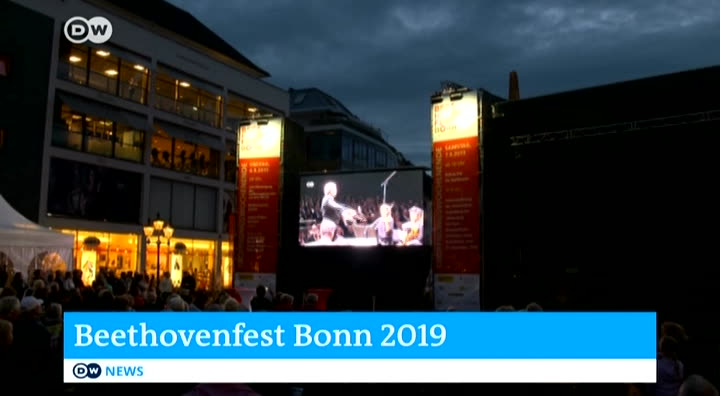 his call for a snap election on the program and. even after the attempt to ban the n.p.t. he stayed loyal to the party which is close to hitler's nazi party outrage as a neo nazi is unanimously elected unopposed as a man. i'm filled welcome to the program the british parliament begins a 5 week suspension from tonight lawmakers will be sent home regardless of how they vote on the prime minister's 2nd call for a snap general election they are likely to be checked this again in another dramatic development parliament speaker john bercow announced that he will stand down by the end of the month prime minister boris johnson has been holding back said talks with his irish counterpart liam rocca in dublin hoping to resolve the
7:46 pm

stalemate over what will happen at the border between mexico countries if and when the u.k. leaves the european union. i am ready to listen to any constructive ways in which we can achieve our great goals and resolve the current impasse. but what we cannot do and will not do and i know you understand this is it creates the replacement of a legal guarantee with a promise you i've looked capitally at no deal i was 60 its consequences both. our country and yours and yes of course we could do it the u.k. could certainly get through it but to be in no doubt that had come would be a failure of state crawl to which we would all be. let's see where we're up to then quintin pale he's an associate fellow with a europe program at the international affairs think tank at chatham house welcome to d w. let's start with the those announcements out out of dublin what have we
7:47 pm

learned today about the 2 latest positions you know it's a huge well that we didn't already know they say they found some common ground but i think they've actually probably just had to explain to each other from live the red cross point of view explaining to boris johnson just how disastrous he thinks no deal on bret's would be. and for the peace process as well as the united kingdom and boris johnson has perhaps had a chance to float some of the rather vague ideas he seems to have about how it might be possible to replace this insurance policy the irish backstop with something else that would mean there wouldn't have to be a border the. right. next thing this snap election m.p.'s have voted against a quick election before this is being brought back to them they will vote again
7:48 pm

today it is likely to go against the government again why does bars johnson want this so much and why m.p.'s are so against it the only way he could possibly get round this new law in part. that says you cannot crash into the european union without an agreement is to win a new mage a majority and then change the law before october the 31st so that's why he's actually really been pushing he's been playing a game he's been trying to say i don't want this election you're forcing me to have it now he's playing another game he's saying if you went allow me to have this election sooner rather than later then it's your fault you're running afraid now the truth is that if he can get an election soon and he's not going to he's going to a much better chance of getting a majority than if he's forced to go late after perspiring brecht's it because then
7:49 pm

he's going to lose votes to the real hard line breaks that said he wants that election sooner rather than later and the opposition's not going to let him have it ok so all this was building up to this next question which is how did we get here how this looks like a mess from inside and outside the u.k. face looks like just a horrible mess and 8 it's one thing to vote to leave the european union we can kind of understand the reasons for and against but to do it in what appears to be such a sham balik fashion how is how why is this happened in this way. essentially the problem all along has been that the government has been completely split. on what sort of bracks it wanted hans the government wanted a relatively soft break that where we'd stay pretty much aligned to a lot of european regulation but the other half wanted a hard break sit where we could go off and do what we like and say to hell with the
7:50 pm

european union we're on our own those are the ones who really want to know deal breaks it so the government ends at these negotiations really not knowing what it wanted it's been impossible that. the big. to make progress and it's remarkable they go to they did now boris johnson took and said but i need to do it by threatening to go out without a deal thereby throwing in his cards or with the hardline brits it has in his party the right wing of the party as a result he's actually split the party right down the middle he's lost 20 month members of parliament to ministers from a government including his brother precisely because he's trying such a step tactics on the rest of the party and i think he's dug himself into a ho out of which he's going to find it really difficult to escape and i think it's very possible we're going to see another prolonged delay and brecht's it may be we
7:51 pm

won't ever see brecht's it's a toll they have made such a pigs ear of the whole thing quentin pill from chatham house thank you so much now take a look at some of the other stories making news around the world. at least 17 people have been killed and dozens more injured in iraq oh after a bus overturned on a bridge amid heavy flooding in the south of the country the total number of passengers is clear police and military rescue teams were dispatched with both the helicopters to search for missing people. preliminary results in russia's local elections showing big losses for the ruling united russia party slike in moscow candidate supported by opposition leader alex saying the valmy won almost half the votes even after many opposition candidates were removed from the ballots there was a low voter turnout. united nations atomic energy agency says iran has
7:52 pm

acquired uranium enrichment equipment but reaches the nuclear deal it's side with major powers and 2015 agreement has been under severe strain since the united states withdrew you need laterally last year and reimposed sanctions iran is trying to convince european signatories to the sanctions impact. british airways says it has cancelled almost all of its u.k. flights as pilots became a 2 day strike even tens of thousands of passengers stranded the industrial action follows about 9 months of failed salary negotiations. political leaders here in germany are demanding to know how a town council elected a neo nazi as its man stephan yeah sure in the end he d. stood for the position unopposed the main one backing from the mainstream parties like chancellor merkel's conservatives but now they want him thrown out of office.
7:53 pm

stat is not be a small industrial park a bakery a hotel and a pizza place but now many people in germany are interested in knowing how the small town and has in the center of germany elected stefania a few days ago the politicians. the extreme right wing n p d announced on facebook that he was elected than the simple administrators of that but from the people for the people he added to his post the vote was unanimous including votes from chancellor angela merkel c.d.u. and her coalition partner s.p.d. one of the council members who voted for yonks defended the choice if those who can we are trying to help the people and address their issues that's all party membership doesn't play a role for us as well stephanie actually has worked for the n.p.t. and the regional and national level for a key is the enough authority as have twice sought and failed to ban the party as a threat to germany's democratic order the domestic intelligence service has kept
7:54 pm

close tabs on the party yaks has even shown up in the agency's report on fright wing extremists but he was democratically elected also because no other candidate was available the fuse approach that presidents a mixed. bag of there was no alternative no wonder he got into an event will never end so your monthly income would have life have to maybe it will have an effect.
left
right
email Borrow Program
tv