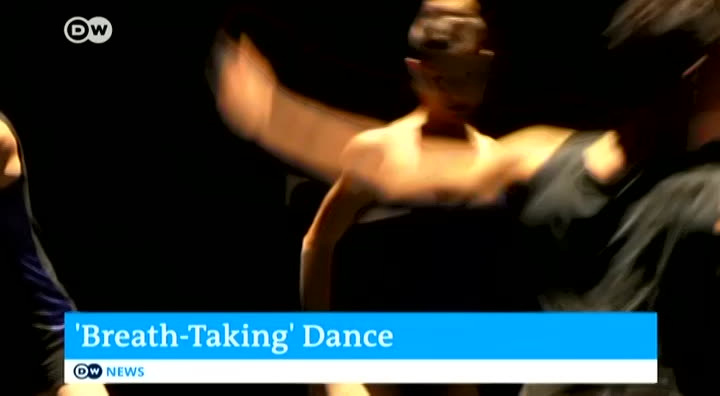 dance in germany they're stuck ballet and with their latest offering a triple bill of international choreographers conspires to take your breath away. and christopher dean alias mr plant and braces the natural world in his arms like in this latest installation tree hop in and see you in france. back when it was published in 1985 margaret atwood's novel the handmaid's tale was critically acclaimed but considered by many to be a bit far fetched the main character offered is one of a cast of scarlet clad handmaids forced to be breeding machines in the patriarchal dystopia of gilliatt will fast forward to 2017 and the novel had a veritable 2nd coming as a t.v. series but also as a symbol of resistance to my sergeant's trompe and politics and that's one reason
12:46 pm 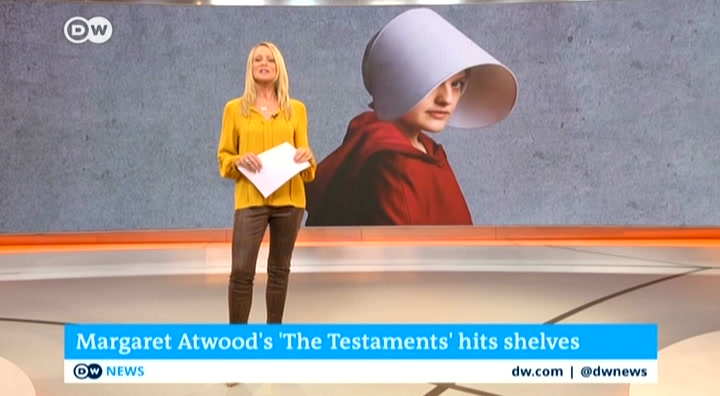 the long awaited sequel has finally arrived. kind my swearing the iconic red cloaks and white head piece is familiar from the t.v. series and subsequent political protests appeared in the streets of london ahead of margaret atwood's night his book launch fine say the book is more relevant than ever in some ways it's becoming a was like them particularly in the night sky. and so this is very current and very relevant very necessary it wasn't just that me it was a horror but it's that 8 minutes to read and x. and the anti feel or every time every word that she writes and she generally genuinely changed my life. actors dressed as hand range evoked good fictional state of giving out handing out oranges and repeating well known catchphrases from the novel. through this guy the canadian or attended the launch and
12:47 pm 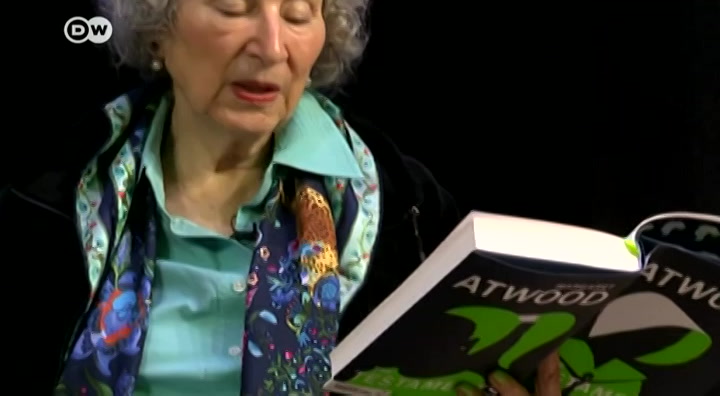 a midnight reading from the long awaited sequel press conference she had this to sign about the world of gilliatt. is the. world let's hope so. although it's never uniform the people that are running things in those societies think that it's just a group and over what they were doing before because. there. was your problem. after 1st the 4 years the waiting is. and the reading can begin. relevance has ever yes the reading can begin here it is the testaments a novel that super hyped kennedy from our culture desk has joined me to talk about it now adrian this is the literary event of the year very much on a scale with almost a harry potter book launch yes it is it is very exciting and unprecedented for
12:48 pm 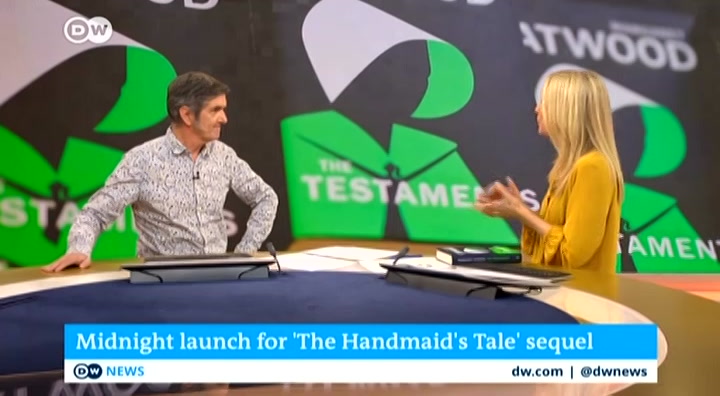 literary books no. and been many midnight book launches like the one we saw in the report cross the u.k. similar events in the u.s. and in canada and margaret atwood will appear at an event at the national theatre in london which will be live streamed to $1000.00 movie theaters across the globe amazing at would very much the rock star of canadian literature at almost 80 years old at 34 years is a long time to wait for a sequel can you tell us why this is coming yes yes it's a bit of a long story but the original book of course was a literary success nominated for the booker prize but it remained a literary classic and didn't really break fruit into the mainstream until just 2 years ago. but then of course it came on with a vengeance it's literally become a cultural phenomenon that's right the hulu t.v. series. starring. morse as offer it was world wide success that hits
12:49 pm 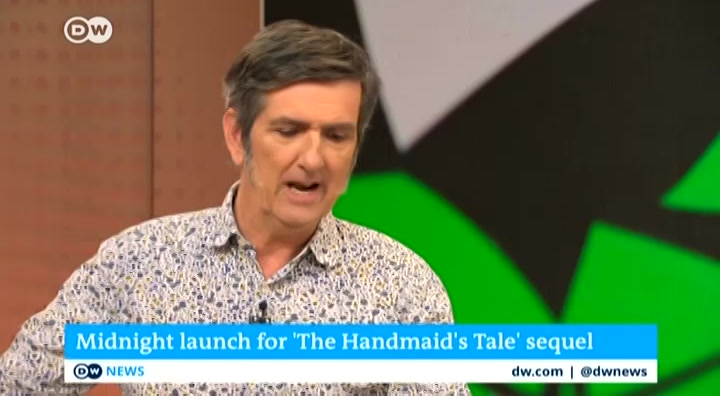 screens just after don't trump can you see the president and was in tears interpreted by many by many inspired new young fans as a warning that a liberal society could quite easily start to slip back into totalitarianism now the 1st series was based on the original book the 2nd series though that would allow the team of writers to develop the story so one reason that which is written sequel is to reclaim the story now she also says she's watching it too because of the kurtz hailing of women's rights in trump's america of course the iconic roark of the hand made has been used by women's rights protesters across the globe which margaret atwood spoke about at her press conference let's see what she had to say. we. you. know.
12:50 pm 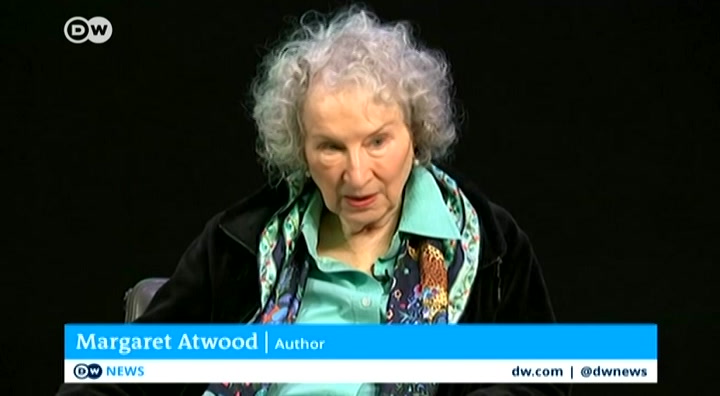 we. produce. we can. write programs. not typically humorous not to the political side but she also says that she wrote this book to answer many of the questions that were asked of her over the years by fans about gilliatt what answers do we get and does this follow the t.v. series the tall well we don't want to give too much weight i can tell you that the action of the new book takes place 15 years after the final ambiguous scene in the hand might style when it was uncertain whether she was being liberated or imprisoned that's right and i can also tell you that the new book is told from perspective of 3 right says none of which is offered that might disappoint some people one of them is the notoriously sadistic. 2 trains that and
12:51 pm 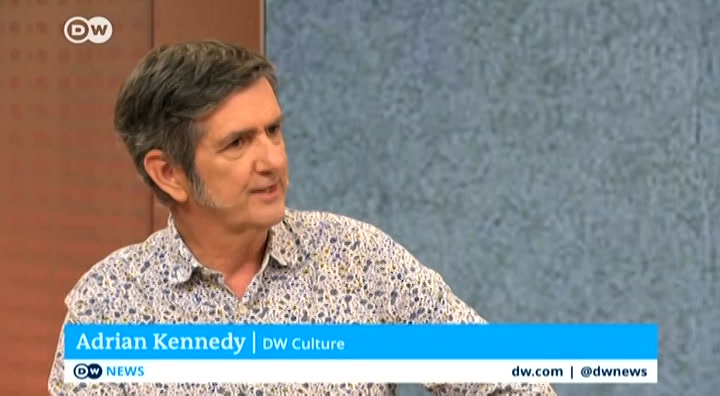 my stew terrifying role terrifying figure the other 2 are young women agnus who has grown up in the totalitarian system and daisy who lives in neighboring canada and to protests against human rights abuses in gilliatt now according to the initial reviews and the book of price surely it's already been nominates only for what they say shortlisted for the book a prize they say that it's a real page turner has many bref taking turns and twists so it sounds different each time to get a story and i can attest a lot of a lot of the typical at woody and humor and the take home message of this of course adrian is read the books 1st across our fingers for that book uprising thank you very much for coming in to tell us about the testaments russia. well now to a dance company that dates back to 1609 when it was actually the court ballet of the dukes of the stock a modern company was formed in the early 1960 s.
12:52 pm 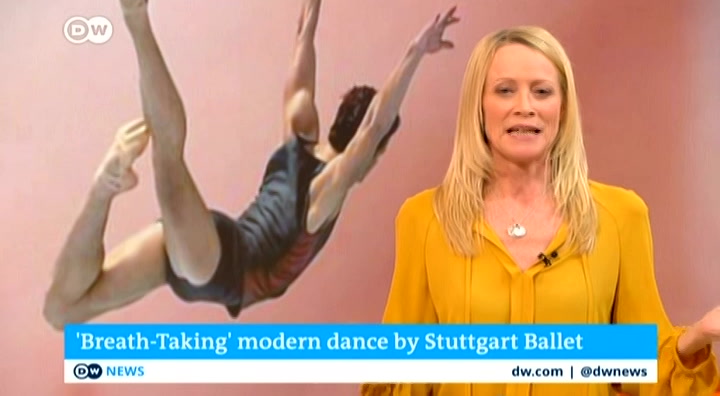 and from its infancy it was praised for its boundary pushing style well now it has teamed up with 3 renowned choreographers for an evening that has earned its title breathtaking. and even ing of the am 3 potus is rarely choreography it's economy has created and unique like dance. did it. fellow choreographer swedish $100.00 places the dances around the wall. and akram khan a british choreographer with bangladeshi roots takes us into the world of traditional indian qatada dance. thing is that the drum music like we heard in the last piece is put you into a trance the salsa. the triple bill opens with it's
12:53 pm 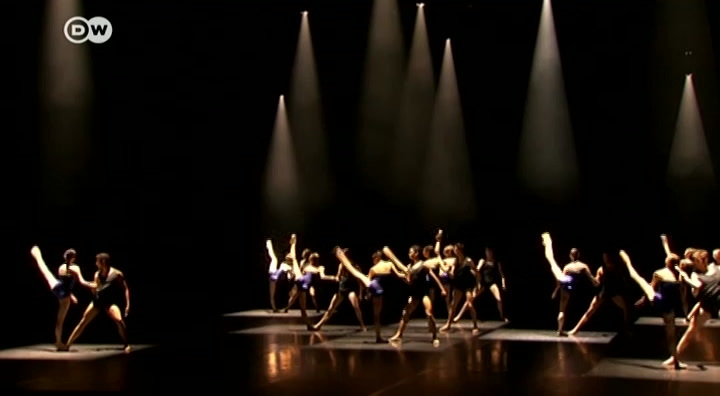 a gully he moves his dances around like a chess pieces on a board of beams of light this choreography is called he. sounds japanese in a visit like 25 years ago in tokyo i saw the electric city. and it calls the police up to their flat called his name because they cycle which is really crowded light. the light dances followed by a chamber of play. 6 dances 3 duets playfully dance around a wall in the center off the stage to name a few on in this piece out of breath. well it actually came from the birth of my daughter that was very sort of problematic like most births are and but i was sort of really touched me was how close life and death was at this very moment so i maybe a month after had to make
12:54 pm 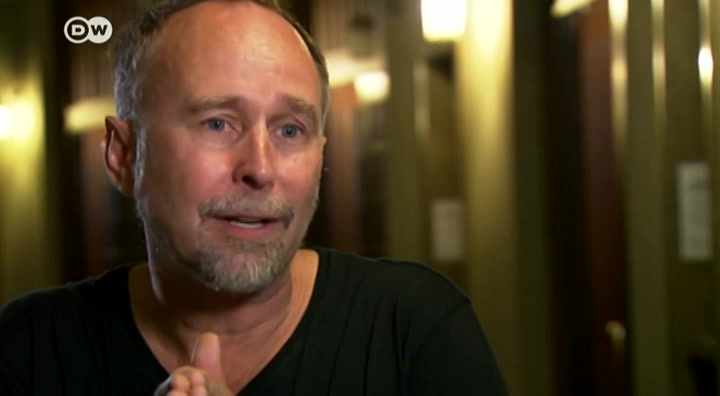 a badly. edited in advance appalled life death and the thin line in between to delete it. thank you that's like this show finishes with a whole new dance style a fusion of contemporary dance and traditional indian dance like the back to the district a ballet dancer attended a cow talk workshop in order to perfect their moves each movement carrying a precise meaning. but like so there's one that's really like a flower opening and closing and enveloping and it's very much oriented towards the heavens. it's a breathtaking show that lives up to its name. finally as forest fires have raged from the arctic to the amazon this summer his
12:55 pm 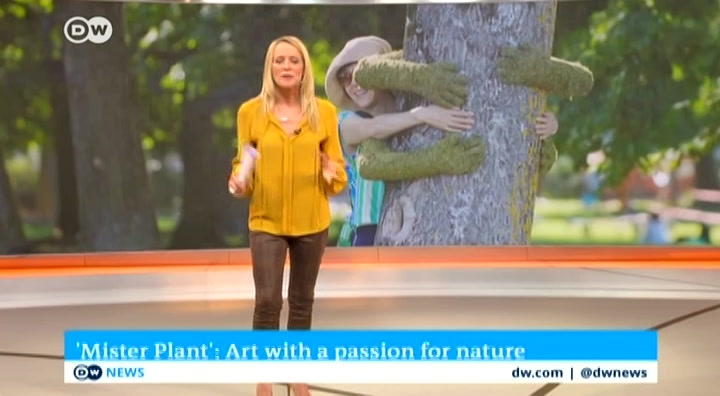 art couldn't be more timely because of the ne mr plant and as an artist from france he's actively participating in the debate about environmentalism where this all his latest installation emphasizes the symbiotic relationship between humans and trees . it's a way of showing love for nature tree huggers the title of his stuff to me it's current work and i'm seeing friends. these sculptures stand for hugging or caring about nature in the trees to do they stand for a philosophy called silver therapy. so that's a kind of therapy that let you draw strength from nature. in the city. he does the plastering and wrapping at his residence for months now mr planned as he calls himself has been at work on his project local people that
12:56 pm 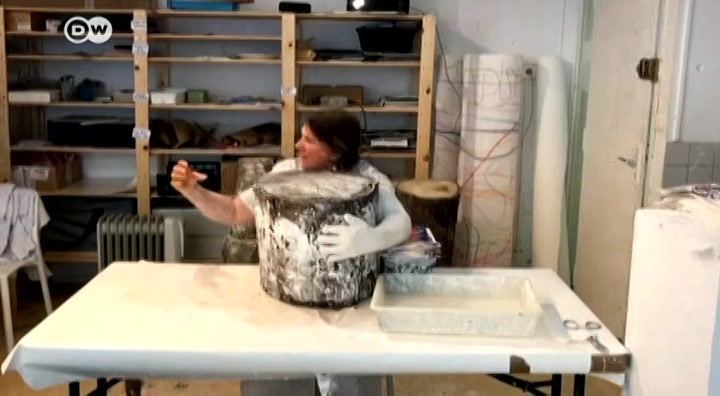 a make plastic casts off their hands. they don't put it that's because i think the project is quite interesting because it calls on viewers to join in and it allowed me to create art in collaboration with the residents of and see. soon as the plaster arms are dry stuff he may get some ready to attach the money. was supposed to put a vision for this project i only use moss for other artwork so use different plans is. it always depends on the project. sure to study it all for show you portray. every arm gets a label with the name of the joan on it a total of $52.00 arms were made this way. the stuff you need has for the public park where he attached the last of the sculptures
12:57 pm 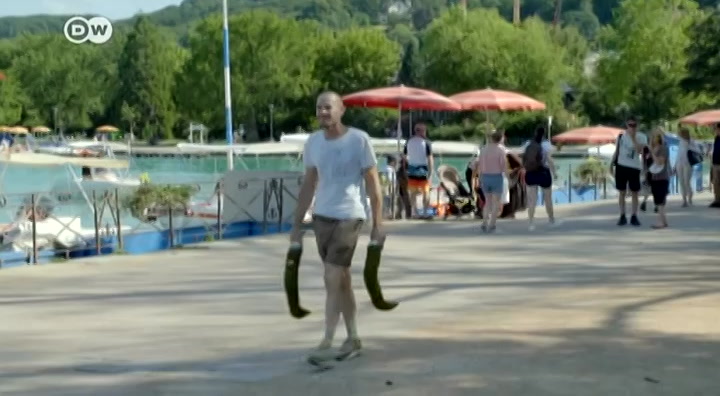 to tree. the illusion of the hog is impeccable. this brings humanity together with nature in its own playful way. message to get out there and hug some trees fell on not know our time is up so until we meet again thanks for watching all the best from us here in berlin just on top he does in. the 1st. light so that talk with buses pass tags smart city. people who talk with apps ashfaq the scooter. and us we'll talk about it all. crash tag transit revolution.
12:58 pm 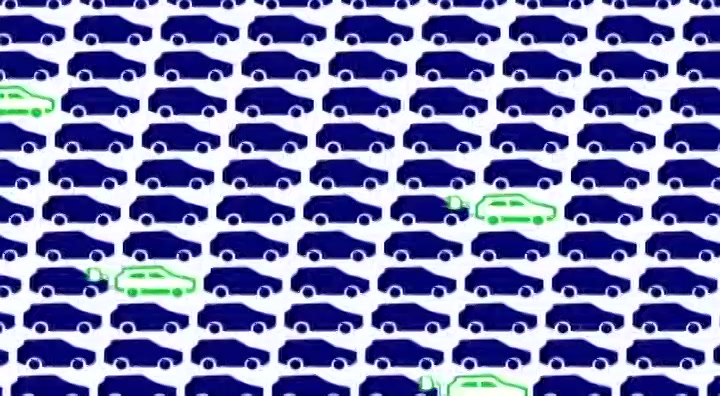 made in germany and 30 minutes on d w. d q africa. change doesn't always have to cost money. the most or in madagascar is competent it isn't only safe often it's contaminated and a danger to me. but none of them is ation has proven that clean drinking actually doesn't have to cost. me. 90 minutes on t.w. . what. good is pulling. some shit out of us. with. insupportable. what's a big. box of old stuff. to deliver.
12:59 pm 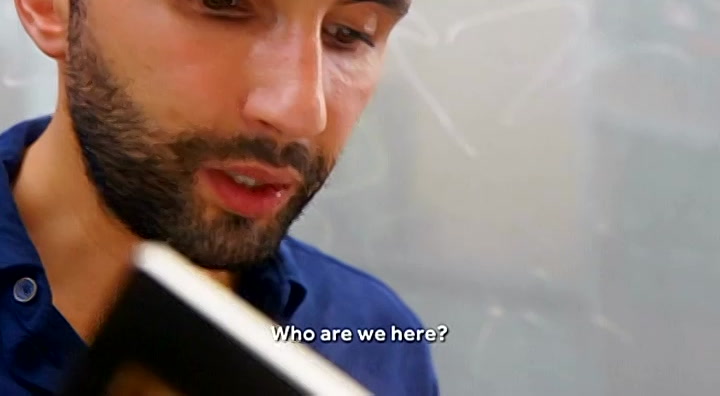 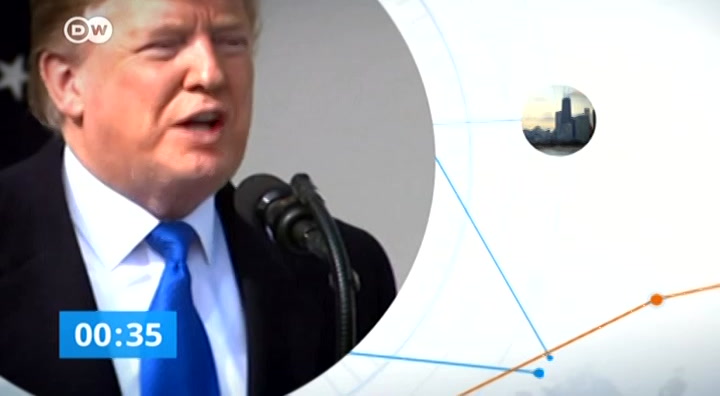 this is g.w. news live from scotland's highest court another barrier to bright said. ruling that boris johnson's government broke the law. provides given by the government to her majesty the queen to approve parliament for months of term or 14 the cold war was unlawful. so this parliament no longer suspended will go to london for some answers
1:01 pm