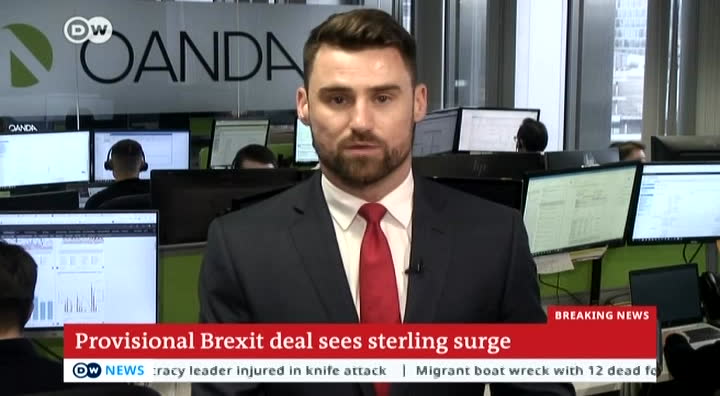 don't think that's the end of the world for the gale like it was with the reason why is because i think if this thing goes to an election johnson is in a very strong position having negotiated a deal that keeps the u.k. out of the park stop all the vast majority of e.u. cash and so on all right frank early in london thank you for that insight. thank you all right let's listen in now in more detail to some of the points of agreement outlined by michelle in particular the new points of agreement with the u.k. compared to the previous brags that yale agreed with boris johnson's predecessor. the u.k. government the other one to do all the one for. the rule agreement. for people. the question of the protocol and i don't need more on. all these negotiations. and we're committed to protect.
12:46 pm

the. first include only. when we do work. avoider all border between arm on the north for normal. or our own economy and protect the integrity of the single market. should only. point to extremely important prime minister drawn from under you. who moved from arnold remains in the u.k. storms territory. overall the possibility for. autonomy. but we all do. and we all. only rushed through on 4 main elements number one. more often
12:47 pm 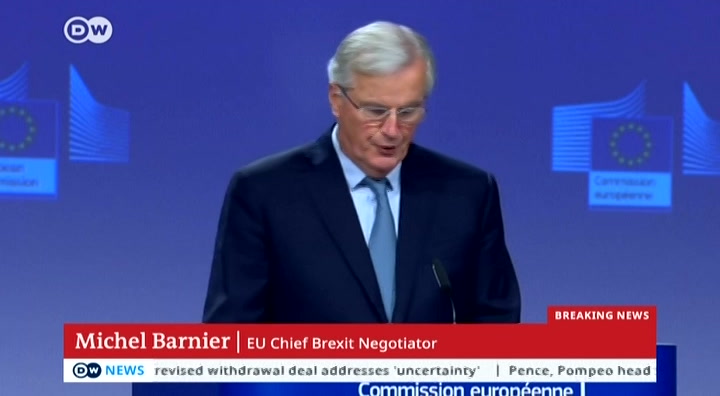 arnold will remain and i'm good doreen you could say. look i've really only 2 groups this means that all are. only. really take of the bones of i'm going to rest on our own and not across the aisle. for all these programs. authorities will be in charge of applying. school or do you mean i've. not looked. beyond oh i prepare board course. there is also the question is of course. lost a lot of room remain here because. if that's going scary for you we could therefore benefit from the u.k. if true. but not alarm and we also remain alone
12:48 pm 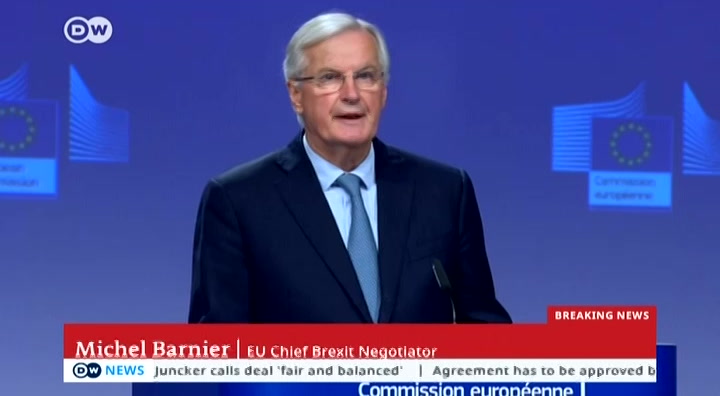 in our single market bull work of woodlawn. least for her look here at the refuse from the plan are you look at the race on products coming form 3rd grocery. aisle those goods you know phenomenon that are not at risk of operating our single market our girl for goods driscoll ventura's their market. reply. 3 knew this not only just morning or soul. we were working out of the chute although. it was a report. to avoid door of competition within the supermarket. oh and still look managed. to
12:49 pm 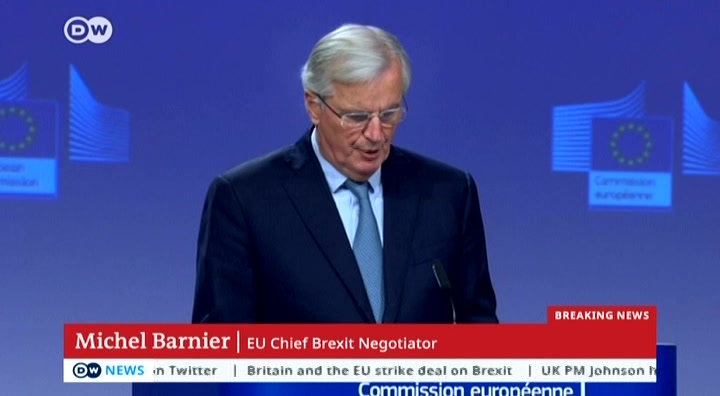 a good. man clearly not integrity of the single rocket work for sure. if you do it. i mean for prime minister john sloan i'm pretty sure one peep through more mone dorm room across all full documentation but you can't reproduce the relevant. law from our own. for you being creampuff or also good political. phenomenon will be able to be side by the simple majority who are thought to continue operating organ communion rules will from illinois and haw look. these democratic support these recall no school overall or a newly agreed across. one week old new you are group
12:50 pm 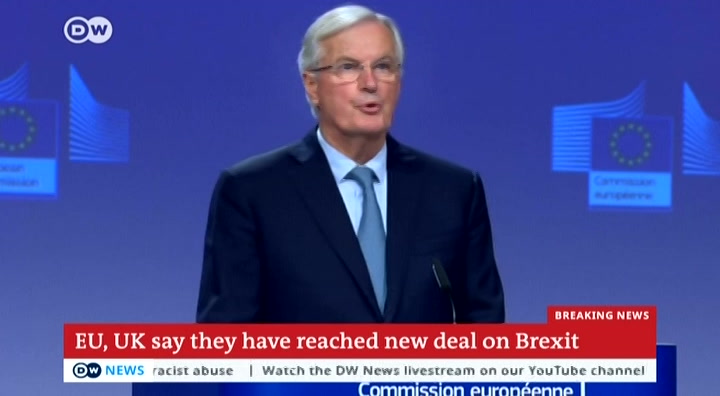 protocol or. nurul group can be replaced by agreement between the. sue. me. for not only the duke about the economy. you can march through with. but. for me. the one. who wrote the really. cool of emotion and. well. all right that use chief brags of negotiator there michel speaking just a short while ago about that a revised. between the u.k. and the e.u. that has successfully been agreed upon
12:51 pm 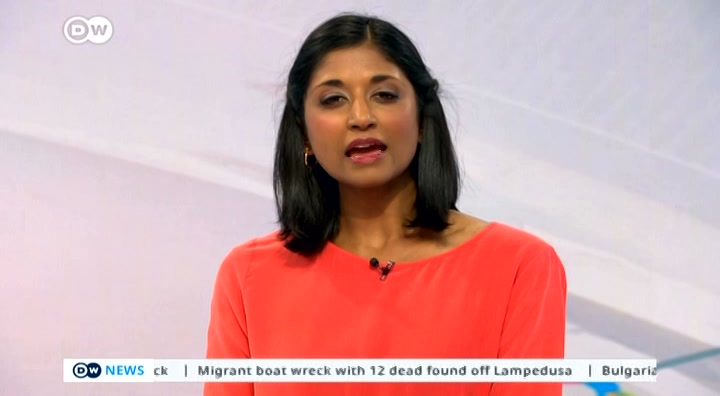 a little bit earlier today let's go back to our correspondents. in brussels and there in london good to see you both again start with you there in brussels you know this is seen as you say as a success a lot of relief i can imagine there in brussels what are some of the reactions you're hearing from the various member states and from officials there in brussels . i without doubt you know from the negotiators working 3 nights in a row working for weeks and months on end on this compromise that i've heard many negotiators tell me in this in those past 2 years that they actually genuinely believe they feel they've made a good deal they've made a good compromise that both the e.u. and the u.k. can live with something that would leave things make create an orderly breck's it and so clearly relief on their part that now we're looking at a situation that is now much less was than a disorderly breck's it it's still bad news for the e.u.
12:52 pm 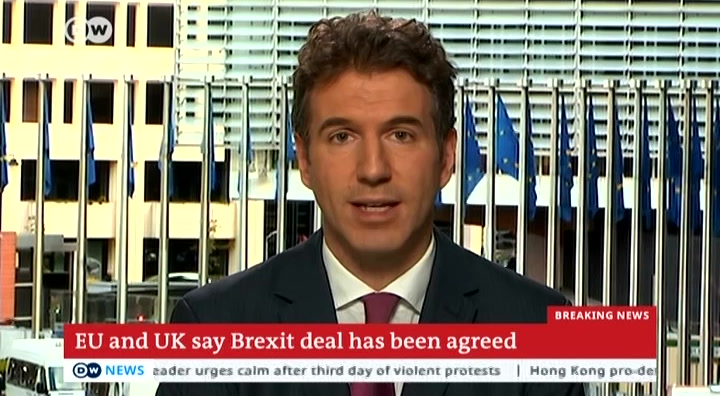 they never wanted this they still believe and that is true for all member states including the european commission the institutions here it is a lose lose situation they'd be better off with the u.k. as part of the e.u. but it is minimizing the damage the question garrick was asked of michelle bennett candy member states actually ratify this agreement during this summit that starts today is that possible. well he said and he's quite correct here that we have to look at the terminology what they will do is they endorse basically that the deal that is now on the table and it's the devil is in the details so they will really look at the small print of that legal text that will be put in front of all the $27.00 leaders and then what happens next is everyone will look at london on saturday and let's presume there is approval in london then that's a document that revised withdrawal agreement would go to the european parliament
12:53 pm 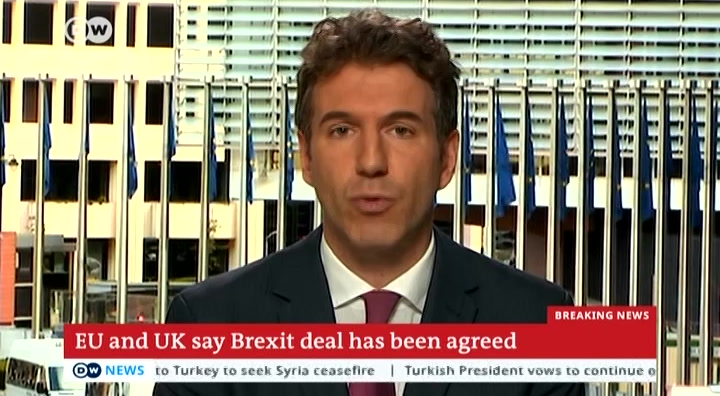 and if the european parliament also gives the green light then it will get formal consent from the european council all right well let's not presume anything as we know we don't know what will happen in london we've seen the leader of u.k. house of commons jacob riis mark saying this is a fundamentally different deal because the democratic backstop is gone that's just what he has been saying in the last few minutes what does that tell us about what kind of support boris johnson might be able to expect. well this statement from jacob riis mark that marrows what we've been hearing out of downing street that's what downing street has been selling a spokeswoman just send this statement it protects the union removes a backstop deals with the unique circumstances on the island of ireland and allows the u.k. to leave the e.u. in time by october 31st and this is the line that boris johnson will be taking now
12:54 pm 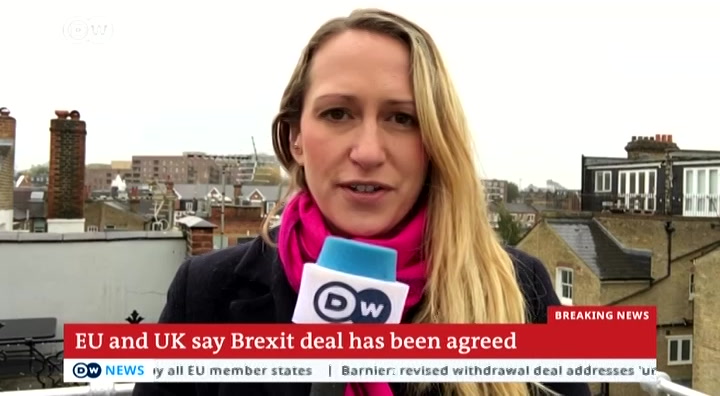 in convincing the members of parliament and rallied around this deal so we've been talking about this during the show but this deal that to reason may it negotiate it was rejected by parliament 3 times and now boris johnson really really has some serious convincing to do it seems like jacob riis among the hotline a hotline of the tory party it seems like that boris johnson was able to rally those hotline around him they just trust him more as prime minister trust also that he can negotiate a better future relationship with the european union we've been talking about that free trade deal that's now been. written into the political declaration so they trust him more going forward and that is why he might have a lot more votes on the concert in the conservative party on his side on super saturday when harlem and then finally voting again on this withdrawal agreement ok
12:55 pm 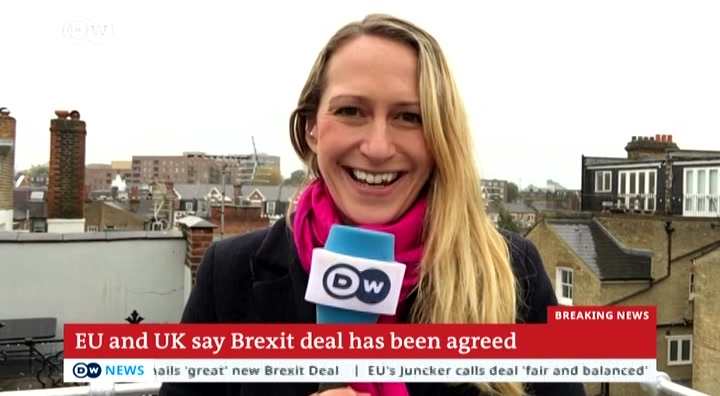 socialite it seems he has more support in the among the conservatives but in terms of what he actually has in its head in his hands in terms of this deal and i know it's a very quick read of 64 pages of important and complex details there but what does he have in his hands that theresa may did not. well he has removed this backstop that was the real sticking point in the withdrawal agreement from 2 recently that insurance policy to a by avoid a hard border between northern ireland and the republic of ireland and he's found ways around it very technical terms a way that northern ireland will stay in the u.k. a customs regulatory zone and just a few checks and the irish sea and so on so this is very much different from what 2 recent may have negotiated and that is why the hardliners
12:56 pm 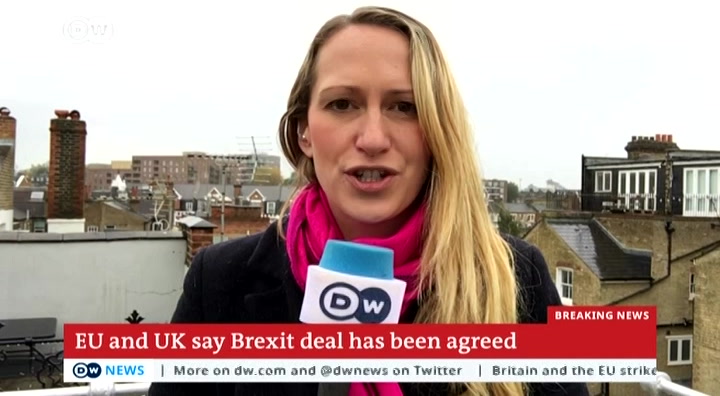 might rally around it but we've also heard from the northern irish do you p.d. that they are still not happy with what's been negotiated and we need to look at the details of why they are not happy they haven't said that in their statement but they said so far they are not on board and that is 10 votes less for boris johnson on saturday if they stick to their guns all right it's all in the numbers there are a lot of parts there for us in london and in brussels thank you both. and what that breaking news story is that we've been covering up britain and the e.u. say they have reached a deal on the u.k.'s withdrawal from the european union boris johnson tweeting out a short while ago it's a quote great new deal he is now urging the u.k. parliament to approve it this week now a deal of the deal actually lays out terms and sticking points including border and customs issues between ireland of the republic of ireland and northern ireland which is part of the u.k. still as we just heard there are johnson's northern irish allies in parliament that
12:57 pm

the u.p.a. said they do not plan to back the deal that is all up for debate on saturday in london thank you for watching t w news will be back in just a few minutes with more updates on the story. of the last of their kind in cyprus songbirds and threatened with extinction every year around half a 1000000 of them end up as a delicacy. it's prohibited but for the bird mafia it's a lucrative business. and by our presence or never took a show in cream you know it's nice to know without we're going to be there.
12:58 pm 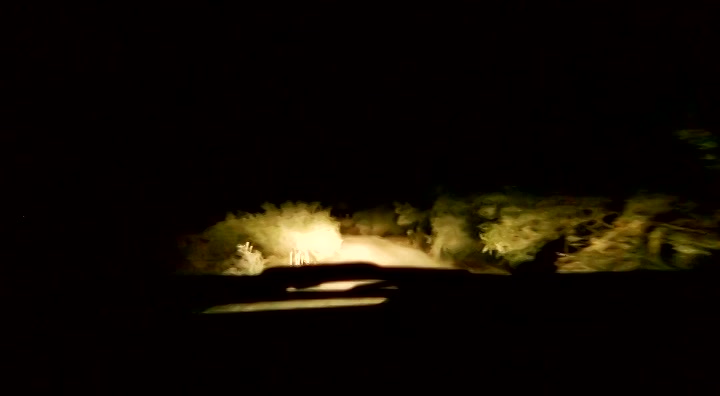 30 minutes w. . answer the conflicts. why is it populism. rising in venezuela. protests roxette blog. the world is in crisis mode. this week we look back at the key interviews of the season the point that for one strange statement was only the real actually real discernible and you. look so for. double. earth home to millions of species a home worth saving. googling geos tell stories of creative people and innovative projects around the world ideas that protect the climate boost clean energy
12:59 pm 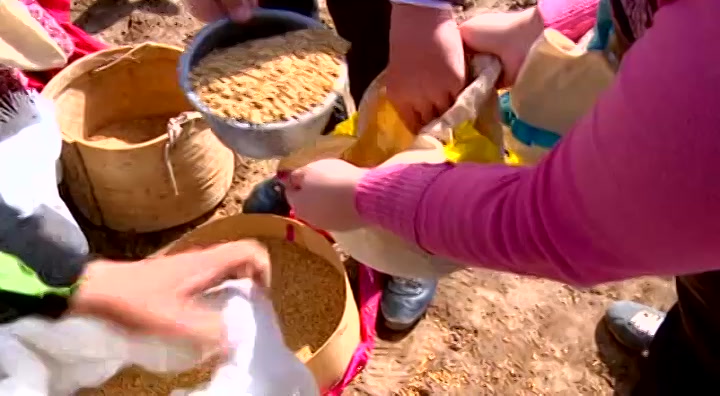 solutions and reforestation. losing interactive content to inspire people to take action the ideas and series of global $3000.00 on t.w. and online take a trip on us to go christmas market hopping with t.w. and cologne and we'll go up to town by airfare and hotel are included for you and a guest. just tell us which german street is your favorite. what's the most beautiful place in germany. what would you like to explore most to enter check in at v.w. dot com slash travel good luck and enjoy some ma. ma .
1:00 pm 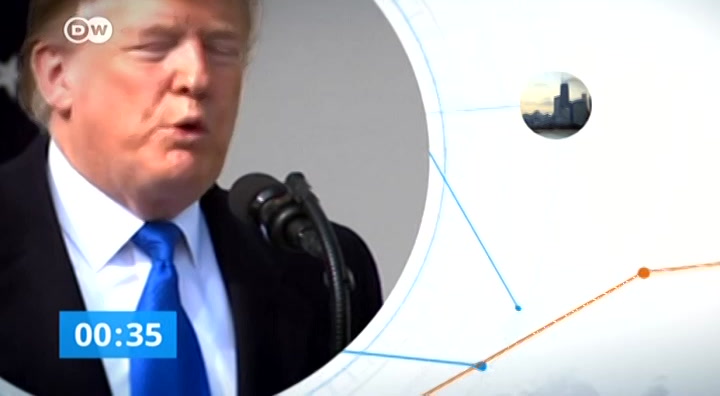 ma. ma. ma. this is news live from berlin the deal is done britain and the e.u. say they have reached an agreement on the u.k.'s departure from the european union the e.u. calls a fair and balanced but any deal still needs to be backed by gold that use member states and the u.k. parliament so what are the prospects of success.
left
right
Borrow Program
tv