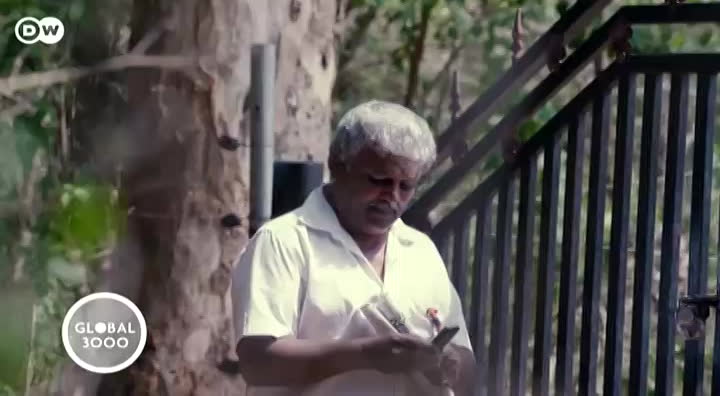 ever was different a message he received in time helped him avert a major disaster on his plantation. what in that anyone a week ago i got an alert message saying there is an elephant in the c.d.o. one of my liberals was in the paddy feed he did not have a phone so i called someone else who alerted him they live and was right there he screamed and the liberal was able to if not for this morning he would have been back and i would get him back my. house one district where to do my lap lives has some of the largest populations of wild asian elephants in india live mostly in the plantations monocultures and paddy fields around the towns conflict with humans began to get serious around the 1970 s. when this district that used to be largely forest began to become urbanized the forest is now highly fragmented and largely replaced by human habitations.
3:46 pm 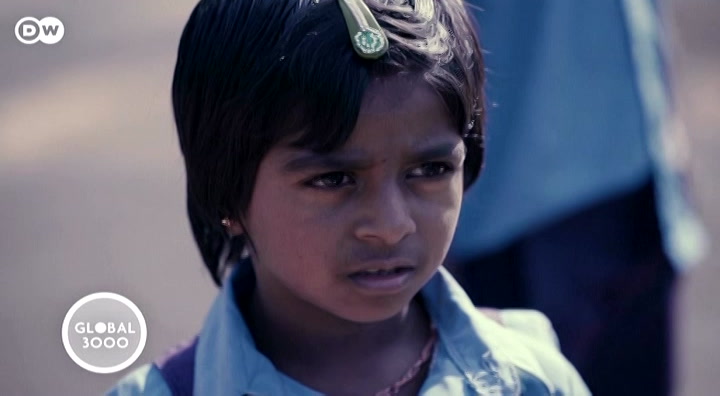 wild elephants have blundered into the villages up by lawyer and roman ali villagers please be vigilant please be vigilant like. the forest department must stay on their toes to keep elephants and humans out of conflict. krishnan is part of n.c.f. a conservation organization that has been working in the area since 2015 to develop technology led solutions to alert locals of elephants presence as a gentle way of ensuring no lives are lost on either side. in this study area that i've been about. in the last 10 years. and most of them more then so. people know that they don't have any friends
3:47 pm 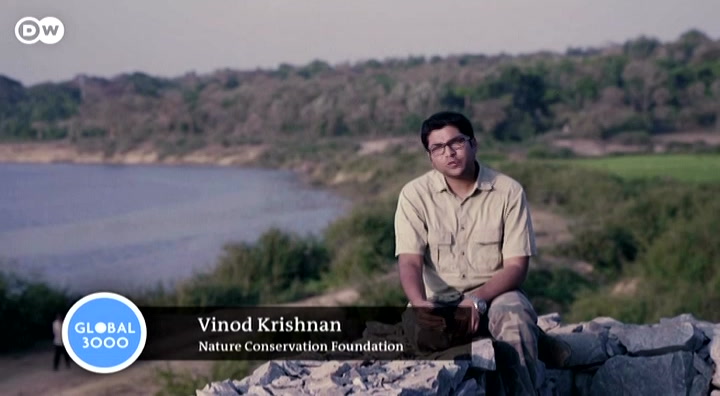 in that area and. probably if they had information these incidents could have been avoided. in 2017 the n.c.f. launched an early warning system the 1st of its kind in the region that covers $220.00 villages in haasan district. it is a free service for which locals can sign up by registering their mobile number with the organisation. retrieve their local. satellite and this is a public service announcement fans have been cited in the villages we request you to be vigilant at all times and. anyone registered routinely receives alerts in the local language kind of down about the possible location of the elephants as well as additional warnings if things look especially risky. this is done through both s.m.s.
3:48 pm 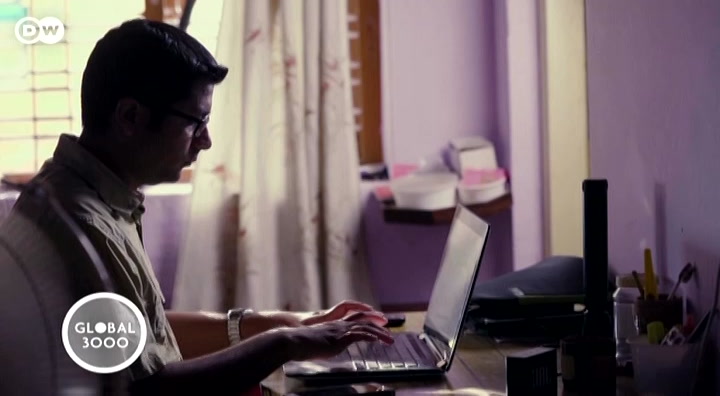 is voice messages as well as a digital display boards and alert lights. because of these interventions the human have. and in the last one year. which has never happened in the history of. the state forest departments record response team supports n.c.s. efforts. this group of 48 people is mostly locals who have been trained by the forest department to physically track the elephant herds so that there was constant and updated information about their locations. the integrated communication system has brought about a broader change to the relate. people an elephant share there. i would say the
3:49 pm 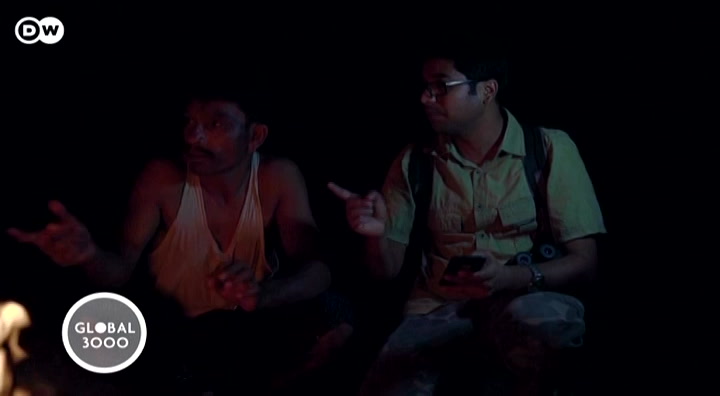 most remarkable change that i would seen. they were reduced to single things. when we started work here if they're really friends in a coffee they're there what is the next state. after repeatedly interacting with them and telling them to stop elephants during the day. i think it's. because they have genes that are there. and they do this that's when their friends as right. wing system has helped reduce conflict in district but as more forest land is set aside for development the future of human elephant coexistence remains fragile.
3:50 pm 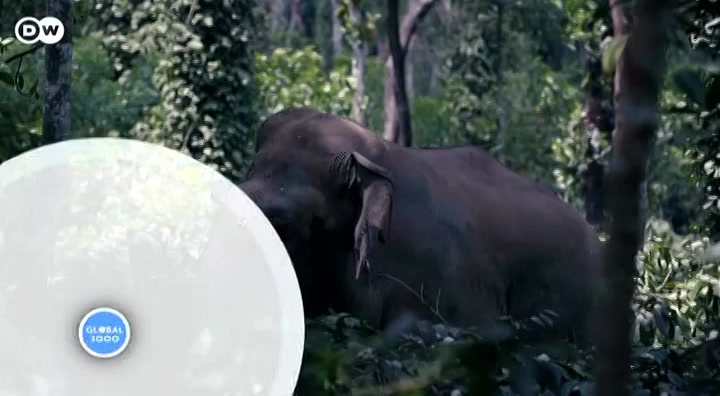 seen from a distance it's breathtaking our blue planet. and although it has an imponderable of water only one percent of it is suitable for human consumption. despite this scarcity people are often wasteful with a precious resource. this combined with rising temperatures is causing many regions to suffer severe droughts. and that is leaving people around the world literally sitting on dry land. on the way to an always this or rather what's left of this. colleen's by he grew up here in southern morocco wants to show us what climate change looks like in the desert. together with an acquaintance he's causing dad dad part of tree to make furniture from the wood but that is because these trees have not borne fruit like dates for a long time. did anyone hear you thanks to advancing sand dunes the palms didn't
3:51 pm 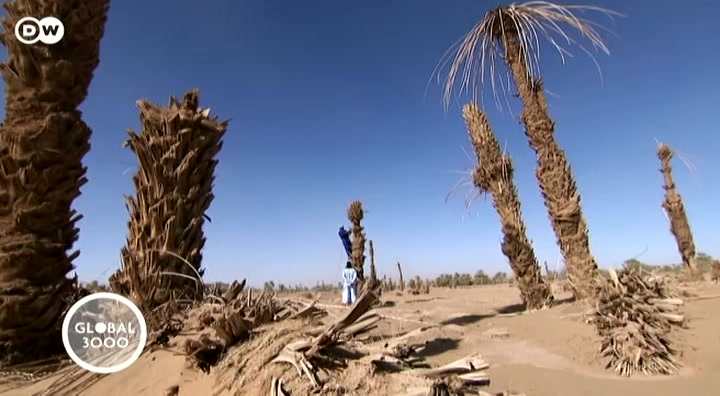 have much of a chance. to confess on google in a way we're paying our last respects to this palm tree this is now a graveyard. all we have left is the remains of that palm tree. he always says is sinking into the desert sounds for years it's been getting hotter and hotter. and while rainfall has been decreasing sandstorms are on the rise. not so long ago hellenes father planted many palm trees here and lived well from bang to full days harvest. why does this cemetery exist the answer is simple it's a lack of water. the public and this shortage is caused by climate change. you for
3:52 pm 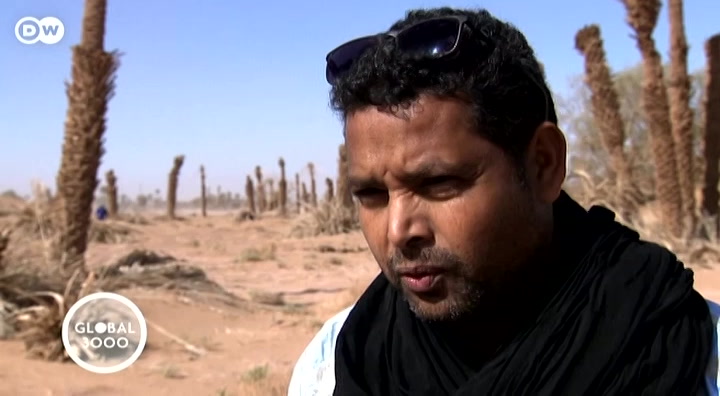 and it's accelerating the deserts expansion that is if you can see it. for you it's the glaciers and the mountains that are disappearing halim says for us it's the oases. the village of handmade elders land on the edge of the sahara. only a patchwork of always seeds remain. agriculture is only possible on a few plots of land. the farmer cultivate a small vegetable garden here on what's left of the tail of the land. the 61 year old has 11 children most of whom have long since left the region. farmer but hardy does not know how long his garden will be able to keep lost something. although he has his own wealth he frequently has to take deeper for
3:53 pm 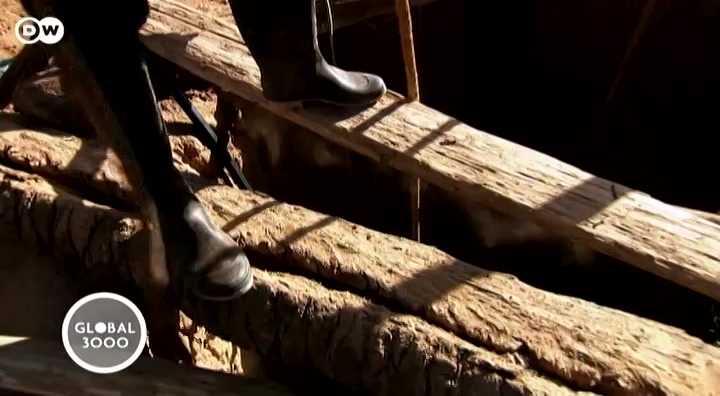 water through most of the future it looks like this the boys have to look for work somewhere else. only my generation the older generation stays here. in. the sand dunes are ready encroaching on his garden only a few palm trees are left to remind him of the former oasis. 7000 people live in harmony. most of the inhabitants have left the village. hallums to buy runs a small cafe here. and he also works as a tourist guide. he's fascinated by how the climate is changing his home country. chemist mariam 10 after he
3:54 pm 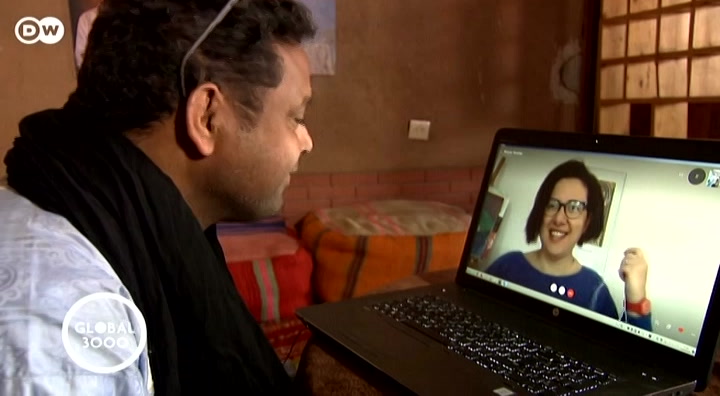 is researching this exact subject at the university of kansas blanka. studies predict that the temperature in north africa will rise twice as fast as the global average haul to the desert climate would be the worst in the future and especially in the summer the increase of temperature will be also about $2.00 to $3.00 degrees . in the mine scenario. 2 thirds of all oases in morocco have disappeared over the last century. i've got a bit of the farmers are hoping to stop the advance of the desert with bushes and trees but also a new pate and from holland. the water box is a part made of bio plastics. that i'm sure your political are going to propose you
3:55 pm 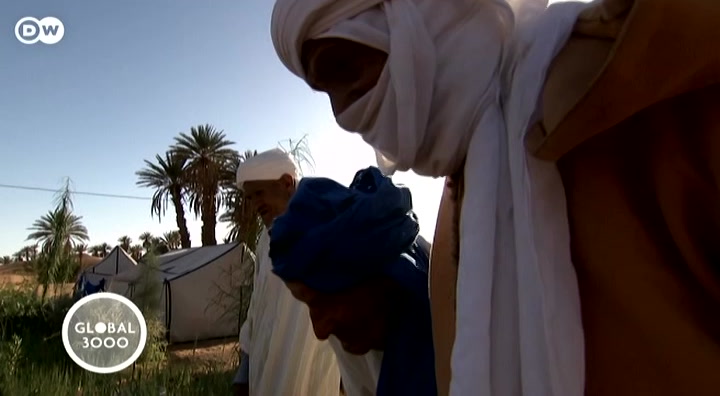 know that's been met with this fledgling tree is placed inside and then planted in the soil then the water boxes filled with plenty of water the hope is that this method will give the new tree a natural water tank and a better chance of survival trees and bushes as a barrier this is one way that the last fertile fields will be defended against the sahara. is an alarm bell for the rest of the world soon they'll be nothing left here the desert is quickly taking over our oases was he's. not far from the village is the largest sandy desert in morocco eric to gaga it's a popular tourist destination. but the my she sand dunes are also a warning because their growth is not slowing. the devastation that halim is fighting against continues.
3:56 pm 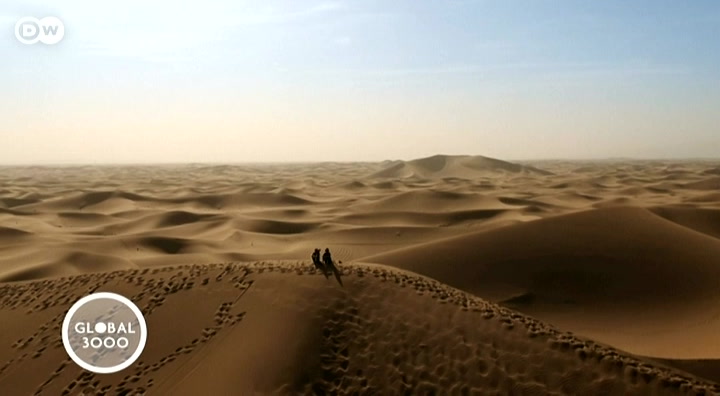 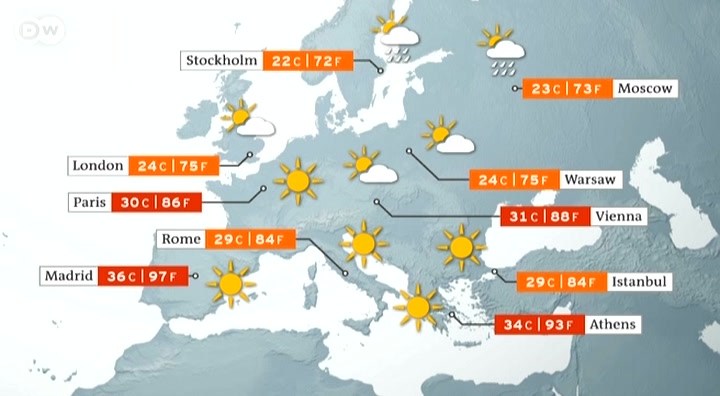 ego indiana top of the line products and bottom of the barrel profit that's what india's couple farmers in the himalayan mountains are you. they decided to band together and invest in new business models and innovative techniques because only together can make them stand in tough competition.
3:58 pm 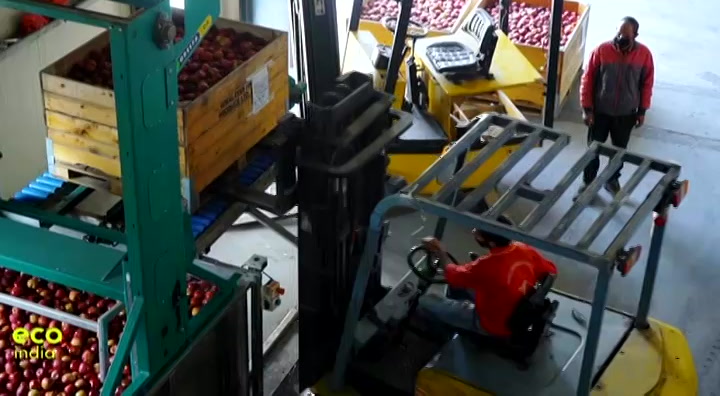 in 30 minutes on d w are they friends. or are they enemies of my dad award for roger. donald trump and. our 2 part documentary analyzes the this is the relationship between russia and the u.s. and between their presidents how does. their rivalry and their dangerous mutual admiration affection the rest of the world's. bosom bullies trump and putin starts august 3rd on d. w. . welcome to the girl next new to china. gold mine of stories. with exclusive insights. and a must see concerning startup culture in europe. the place to be for curious minds
3:59 pm 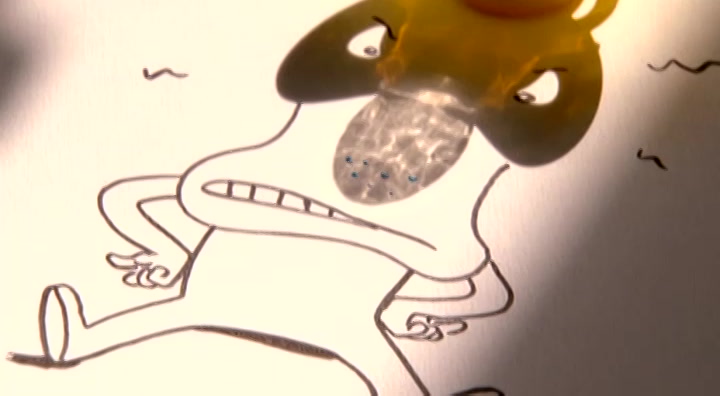 . do it yourself networkers look. so subscribe and don't miss out. we're all set. to go beyond the obvious. places that live. as we take on the world. player of all of the stories that matter to you under. what ever it is to play running now playing flip w. made for mines. hi i'm neal i'm good welcome to the 2nd season of on the fence about the environment and still about society it's still about us planets on the brink spoke to several leading experts in the film about to check. look up just
4:00 pm 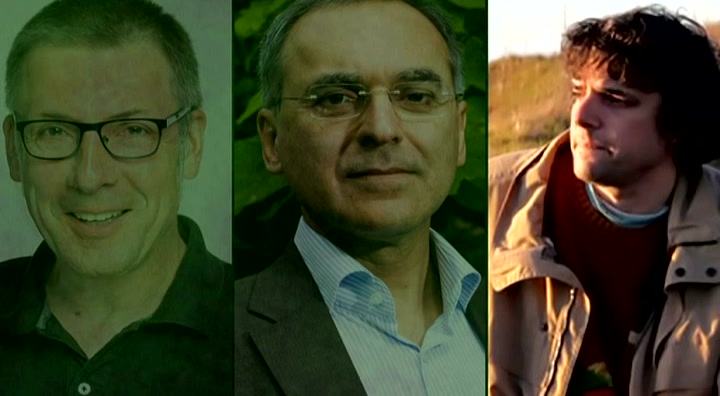 a couple of real fans the flames. play. play play play. this is news live from berlin the u.s. slashes troop numbers in germany nearly 12000 soldiers will either be deployed elsewhere in europe or sent back to the u.s. that carries out president trump's wish to punish you because he says the country doesn't contribute enough contacts also coming up corona virus infection so we're in europe with many people traveling just as european.
left
right
Borrow Program
tv