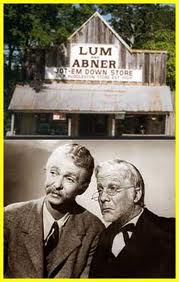 Reviewer: KentuckyUSA - favorite - January 2, 2020
Subject: From the junk drawer
I expected to find sequential episodes, instead, this is just a jumble of shows tossed together, totally disorganized.

Reviewer: zorka47 - favoritefavoritefavorite - September 27, 2019
Subject: Date on Episode #2
That date given of 1/2/1933 has to be wrong because the episode references an incident that it states occurred in June 1933. Difficult to reference something in the future.

Reviewer: SaraBellePalsy - favoritefavoritefavoritefavoritefavorite - December 29, 2016
Subject: An absolute gem
Clever and full of wit and charm, "Lum and Abner" is truly a classic. You can listen to a dozen episodes in a row and never tire of it. It's great entertainment.
I remember a couple of years ago I listened to a slighty different version. After many, many years on the air, a decision was made (obviously by some "network executive) to revamp the show. Then came " The NEW Lum and Abner show." Complete with an excited announcer, band music leading up to the show's introduction, and full of extended fake applause and canned laughter after almost EVERY line. It was terrible!
The archives need not post these episodes.

Reviewer: nwlorax - favoritefavoritefavoritefavorite - December 16, 2016
Subject: Small Town Comedy
I've never cared for most situation comedies on television. However, Lum and Abner on radio is superior in every way I can think of to its nearest tv equivalents (Green Acres, Petticoat Junction), and there's no laugh track!