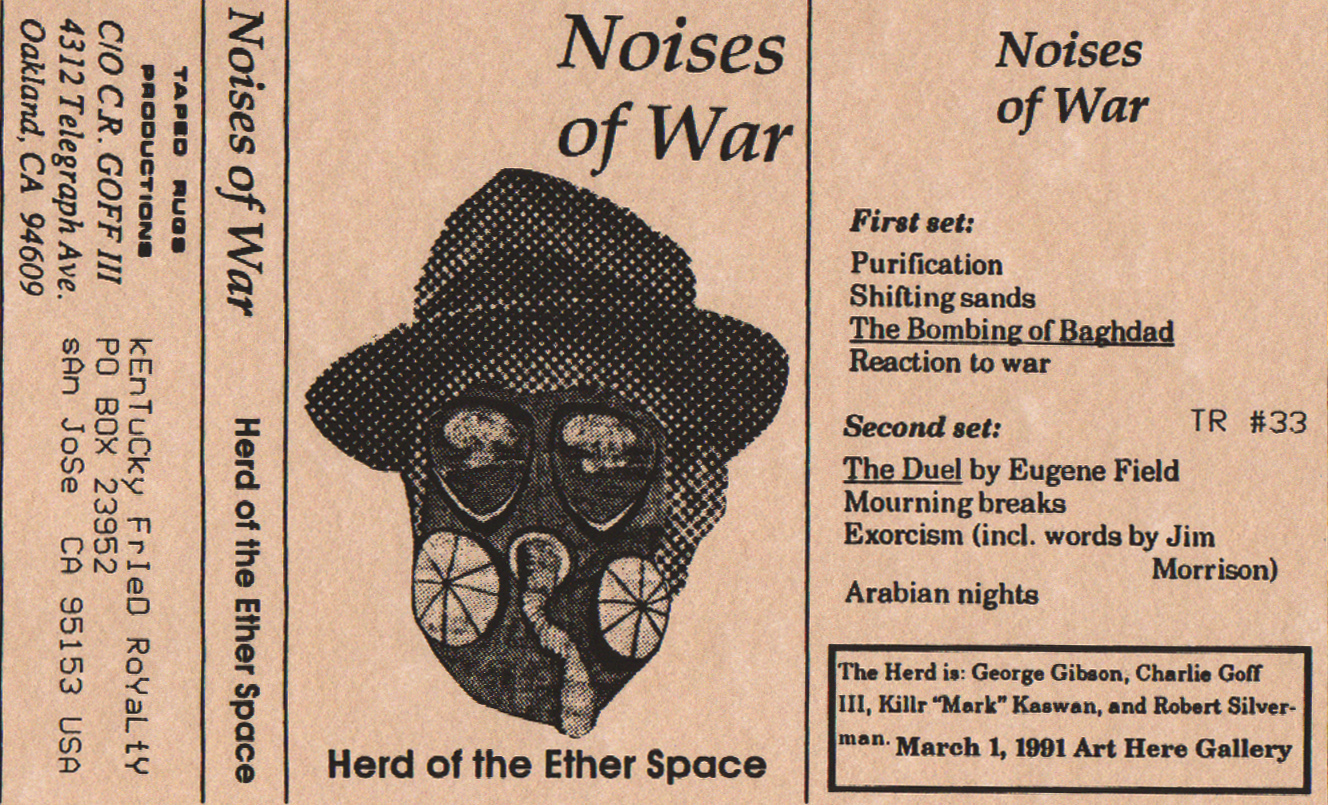 by
Herd Of The Ether Space

by Herd Of The Ether Space


A savage war for the control of Middle East petroleum resources took place between the years 1990 and 1991. As the conflict escalated, governments from all over the world got involved, and lives from every corner of the globe were put at risk. By the time that a cease-fire had been achieved in March of 1991, the Middle East was left with tens of thousands of dead and wounded soldiers and civilians, a number of unprecedented environmental cataclysms, and a host of precariously unresolved political posturings.

Soon after President George H. W. Bush ordered the USA's military to bomb Baghdad on January 17th, 1991, the members of Herd Of The Ether Space (HOTES) decided it was time to express their disgust for those responsible for bringing so much pain to the planet with their quests for petroleum supremacy. Their ire was not only aimed at Bush and his Republican supporters, but at Saddam Hussein and everyone else responsible for this deadly exercise in greed management: every dictator, shah, prime minister, oil company executive, media magnate, weapons manufacturer, etc.

HOTES members: George Gibson, Charles Rice Goff III, Killr "Mark" Kaswan, and Robert Silverman chose March 1st, 1991, as the date on which they would make their first public statement regarding the Persian Gulf War. This statement would come in the form of an elaborate live performance. In the weeks leading up to this performance, the group compiled a library of audio and video about the ongoing conflict to incorporate into their presentation. They spent hours editing up these materials into forms that could easily and effectively be used on stage. To refine their themes and performance strategies, the Herd gathered to rehearse on January 25th, February 10th, February 17th, and February 24th. All the while, the horrors of the war and the predictions for even more terrible things to come were piling up.

Indeed, the world seemed convinced that this particular chapter in the Middle East war for oil would be a long one, and as a result, the members of HOTES anticipated that their March 1st show would be the first of several performances on the subject. As it turned out, however, the so-called "liberation of Kuwait" took just over a month, and a cease-fire agreement was signed on the very same March 1st that HOTES gave its first (and thus, only) performance in protest of the Persian Gulf War.

The show was hosted by the "Art Here" Gallery in Albany, California. The performance was filmed and the live audio was recorded. Taped Rugs Productions released a cassette album from the performance, entitled: "Noises Of War" (NOW) later in 1991. The tape was co-released by the California outlet of Kentucky Fried Royalty recordings, supervised by Don Campau. A couple of edits from the rehearsals were released by Taped Rugs in the following years on other cassette albums as well.

This archive contains all of the audio recordings from the March 1st performance as well as several recordings from the rehearsal sessions. The rehearsals vary in many ways from the actual performance pieces. Their inclusion in this archive helps define the evolution of the performance pieces and showcases the degrees to which HOTES incorporated improvisation into their compositions. Several of the rehearsal recordings archived here have never previously been made available to the public. This archive also contains jpeg files of the cassette cover art for all of the releases related to these recordings as well as jpeg files of the NOW promotional poster and NOW show program.

The basic framework for the "Noises Of War" presentation consisted of seven movements which followed a somewhat narrative arrangement:

7 Exorcism (an attempt to free the mind and body from the torments of the war -- this movement included a reading of some ethereal words written by the late Doors lyricist, Jim Morrison)

1 Tracks 1-3 were recorded at the March 1st performance in Albany, California. Goff spliced about eight minutes from the February 24th rehearsal of "Reaction To War" onto the end of Track 1 to create the version of "Reaction To War" which appeared on the NOW cassette album.

3 Track 8: "Mourning Has Broken" (an alternative title for "Mourning Breaks") was included on the Taped Rugs compilation cassette album entitled: "Fjaern," co-released by Hypertonia World Enterprises of Norway in 1993.

5 Killr Kaswan does not appear on Track 11 nor Track 12. He participated in the first hour of the February 17th rehearsal, but he had to leave before these pieces were recorded.