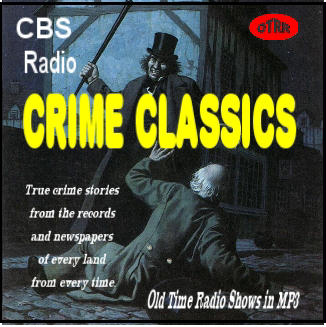 Crime Classics came to CBS September 30, 1953 and was a neat little series of "true crime stories". The show introduced itself succinctly: "Crime Classics, a series of true crime stories from the records and newspapers of every land, from every time. Your host each week, Mr. Thomas Hyland -- connoisseur of crime, student of violence, and teller of murders." Thomas Hyland was played by Lou Merrill, although you'd never know it was an "actor" doing the part. The great Elliott Lewis, actor, producer and director of Suspense, Broadway is My Beat, and On Stage is in charge of this very intelligent and enjoyable show. Bernard Herrmann composed the music that duplicated authentic music of the era being dramatized. Morton Fine and David Friedkin wrote the scripts. Lewis and his writers collected and developed true crime stories expressly for Crime Classics.

Thomas Hyland's delivery is measured and mild-mannered, as if giving a college lecture. Would that all professors were this interesting! The actors in the stories themselves are uniformly sensitive. Orchestral scores by the great Bernard Hermann, who did Orson Welles' Mercury Theater radio show and then Alfred Hitchcock's films, give the stories sophistication and mood. So do the tasteful sound effects. There is a wry, cool-blooded tone to the proceedings.

Cases profiled on the series ranged from seventeenth-century murder to the assassination of Abraham Lincoln. Each and every story, however bizarre, is actually based on fact. For example, the show about the Younger Brothers of the American West has some very interesting background details concerning Quantrell's Raiders and the Kansas Jayhawks. In the story of "John Hayes, his Head, and How They Were Parted," we hear the tale of a glassblower who blows glass perfectly and completely surrounding the severed head of a unknown dead man and placed in glass. Then it is placed in a museum where it remained pending identification. Thus his killers were found out by the dead man, using his head.

This show is a good companion to other old time radio shows that are historically-oriented, such as Cavalcade of America, You Are There, and The American Trail.

Information for this description came from John Dunning's "Tune In Yesterday The Ultimate Encyclopedia of Old-Time Radio".

From the Old Time Radio Researchers Group. See "Notes" Section below for more information on the OTRR.

It contains the most complete and accurate version of this series in the best sound possible at the time of creation. An updated version will be issued if more episodes or better sounding ones become available.

This is the Single Episodes Page. The Maintained Set includes extras not found here. It is located at OTRR Maintained Set. This Single Episodes page is provided in case you want to sample the shows. Note that in many cases, file names have been modified from the original OTRR names to conform to archive.org naming requirements.

OTRR Maintained Set -- This set contains all known episodes in the best available audio condition with the most accurate dates and titles known to be in general circulation and based on current research at the time of release. Replaces OTRR Certified Accurate and OTRR Certified Complete.

OTRR Non-Maintained Set -- A collection of shows that has not gone through the OTRR Maintenance process.

OTRR Certified Accurate -- A series that was "Certified Accurate" indicated that all the episodes were properly identified and labeled based on current information but that the series did not contain all known extant episodes.

OTRR Non-Certified -- A collection of shows that has not gone through the OTRR Certification process.

Also, beginning in 2019, the version numbers of our OTRR releases changed format -- instead of v1.0 or v2.1, we are now using a version number that reflects the year and month the set was released. The format used is a two-digit year followed by a two-digit month. For example, "v1906" indicates a set that was released in June 2019, or "v1910" indicates a set released in October 2019.

NOTE: There are no passwords for any of our ZIP files. If you are prompted for a password, before downloading the file again, try unzipping the file into a shorter full folder path name -- for example, unzip to "C:\" instead of "C:\Documents and Settings\your_Windows_ID\some_other_folder\". Sorry, some of our releases contain long folder and file names, which sometimes manifests itself on the Windows platform as prompting for a password for the ZIP file. Or try renaming the ZIP file itself to a shorter name before unzipping.

For the full OTRR Release, see the OTRR Maintained page:

Also the writing is very clever.

One interesting thing: a lot of amoral women in these episodes. The stereotype of the conniving, grasping shrew appears often. So, perhaps a bit of a sexist slant, but if that doesn't offend you too much, then these shows are highly recommended.
Reviewer: mcm2500 - favoritefavoritefavoritefavoritefavorite - January 6, 2008
Subject: Very Good Show!
I really enjoyed this show. Previous to finding this site the only otr I listened to was Sherlock Holmes w/Basil Rathbone. Its very exciting finding shows like this.
A few cases I never heard of plus the old favorites like Jack the Ripper. Very well done and interesting. Wish they were still making them.

Uploaded by OTRRArchive on August 6, 2006