An American Vendetta: A Story of Barbarism in the United States 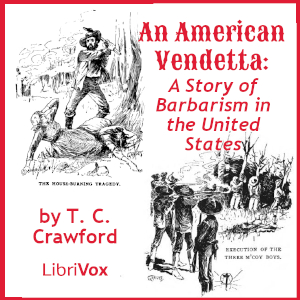 An American Vendetta: A Story of Barbarism in the United States

LibriVox recording of An American Vendetta: A Story of Barbarism in the United States by Theron Clark Crawford.
Read in English by volunteer readers.
The phrase "The Hatfields and McCoys" conjures up images of feudal warfare and Appalachian backwardness even to this day. This is a sensationalized account of the feud between the Hatfields and McCoys along the mountainous border of Kentucky and West Virginia in the late 1800s. At the height of the feud in 1888, yellow journalist T. C. Crawford interviewed Anderson "Devil Anse" Hatfield in person at his headquarters in West Virginia. Crawford's stories were serialized in a New York newspaper and later published in book form.

The accounts of the Hatfields and McCoys led to the still-common, unfair stereotype of the ignorant, backward, trigger-happy mountaineer. While the violence in the Wild West was romanticized, the violence in the Appalachians was vilified and exaggerated. The resulting sentiment was that the mountain folk needed civilizing, which the railroad and coal mining capitalists were eager to provide . . . in exchange for their land, autonomy, and generally happy way of life. (Summary by TriciaG)

NOTE: There are two chapters named "Chapter III" and no Chapter V in this book. The two chapter 3s have been labeled as Chapter IIIa and IIIb.
For further information, including links to online text, reader information, RSS feeds, CD cover or other formats (if available), please go to the LibriVox catalog page for this recording.
For more free audio books or to become a volunteer reader, visit LibriVox.org.

Uploaded by librivoxbooks on August 17, 2020