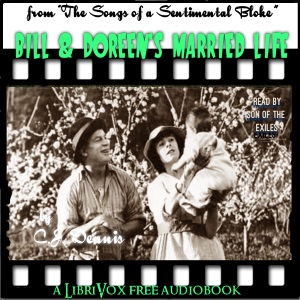 Read in English by Son of the Exiles

"Bill & Doreen's Married Life (Selections from "Doreen")" is the sequel to "Bill & Doreen's Courtship" and "Bill & Doreen Get Hitched", the latter two being "Selections from 'The Songs of a Sentimental Bloke'". "The Songs of a Sentimental Bloke" is a verse novel by Australian novelist and poet C. J. Dennis. The work was first published in book form in 1915 and sold over 60,000 copies in nine editions within the first year. A special pocket edition was even printed for the Australian soldiers in the trenches during the Great War. "The Songs of a Sentimental Bloke" tells the story of Bill, a larrikin of the Little Lonsdale Street push, who is introduced to a young woman by the name of Doreen. The book chronicles their courtship and marriage, detailing Bill's transformation from a violence-prone gang member to a contented husband and father. - Summary by Wikipedia

Uploaded by librivoxbooks on February 3, 2018