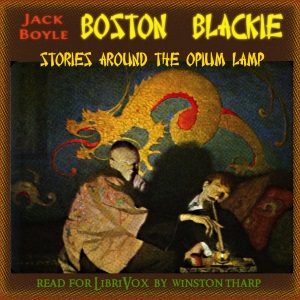 LibriVox recording of Boston Blackie: Stories Around the Opium Lamp by Jack Boyle.
Read in English by Winston Tharp
Boston Blackie had his birth in the imagination of a self confessed “opium eater.” Jack Boyle was a San Francisco newspaper man who became dependent upon the drug to make his deadlines, lost his job, and turned to crime to support his habit. He served several prison terms and while incarcerated in Colorado began writing a series of short stories for the American Magazine based on his experiences. Boston Blackie was a much darker character in these early stories than he became in later incarnations in book, film, radio and television, which dropped his opium dependence. This collection presents the first four Boston Blackie stories to be published, prefaced by an autobiographical piece by Boyle, who wrote them all under the pseudonym “No. 6606,” his prisoner number. - Summary by Winston Tharp
For further information, including links to online text, reader information, RSS feeds, CD cover or other formats (if available), please go to the LibriVox catalog page for this recording.

Uploaded by librivoxbooks on January 6, 2017