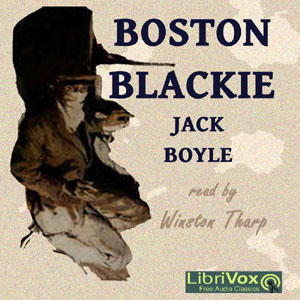 Read in English by Winston Tharp.

Boston Blackie is the novelization of a group of pulp short stories by Jack Boyle (1881-1928). Blackie, an ex-con with a college education, is a jewel thief based in San Francisco, who outwits the cops with the help of his wife Mary. The character was altered for a later series of popular films and radio shows to become a “reformed” jewel thief turned private eye. (Summary by Winston Tharp)

Reviewer: lanternland - favoritefavoritefavoritefavoritefavorite - June 16, 2017
Subject: One of my favorites - I just listened to it again...
I initially thought that this was going to be another boring old fashioned cops and robbers book - but no, it is terrific, and so is the reader, Winston Tharp. He is one of the best. Love the ending. Ten stars!

The author of Boston Blackie, Jack Boyle, served time in San Quentin, so he knew what he was talking about!
Reviewer: mramshaw - favoritefavoritefavoritefavorite - August 13, 2015
Subject: Entertaining melodrama
The material is slightly dated but well-constructed.

The social point of view expressed may not be for everyone.

A fine reading by Winston Tharp.
Reviewer: kerriganm - favoritefavoritefavoritefavoritefavorite - February 10, 2015
Subject: An exciting, suspenseful story with vivid, likeable antiheros.
I was always eager to hear the next chapter and was breathlessly rooting for Blackie and Mary. Well-drawn side characters, too. I guess there is a reason Boston Blackie was so popular in his day. Movies, radio shows, novelizations...

As made clear in the description, Boston Backie was not your typical hero. He's a "safe-cracker", and his world is divided into crooks (who protect each other according to their strict code of honor and are "right"), and "coppers" (the worst form of insult in Blackie's world: police, police informants, and those who are intent on full punishment according to the law.).

The author might have had an uphill battle to make us like and root for Blackie, but he plays his cards well. Blackie is loving and completely faithful to his wife (his wife, Mary, is also all that could be wished for in this regard). He never "splits" on a friend. He is kind and generous to a fault within the underworld. His crimes are also sugar-coated for us: his victims are cruel and callous, fully deserving of punishment that a lawful nation will not give. Later chapters set in a prison help us even more in this regard. Prisoners are routinely tortured (sometimes to permanent injury, even death) and always mistreated. Policemen we meet are small, mean creatures and are wantonly vicious. They have no qualms about breaking laws themselves if it gains them their ends.

I recommend this, and the radio plays that are also available on archive.org. In these, Blackie maintains his outsider status but is reformed- making his hero status easier to digest for the later and more morally upright radio audiences. Or maybe it was the addition of commercial sponsors unwilling to offend potential customers that triggered the less morally ambiguous rewrite.

Uploaded by librivoxbooks on December 25, 2013