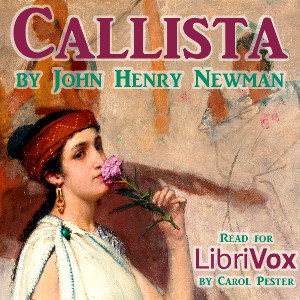 LibriVox recording of Callista by John Henry Newman.
Read in English by Carol Pester
Callista, A Tale of the Third Century, was written by John Henry Newman, who was a scholarly and personable Anglican theologian who became a Catholic priest and cardinal, bringing a good number of Protestant friends along with him into the Roman faith. He wrote Callista as the fruit of a challenge (dare we say “bet”?) with Cardinal Nicholas Wiseman that each man would write a novel about the early church. Wiseman wrote Fabiola and Newman wrote Callista, publishing it in 1855. The title character is a beautiful and talented, but unhappy Greek woman living in pagan Roman North Africa in the third century. She is wooed by a lonely young Christian man, for whom she shows little interest, though she deeply desires to know more about his Christian faith. However, the third century was a dangerous time for Christians, with the onset of persecution under the Emperor Decius. The colorful cast of characters react to the persecution in different ways, but some are put to the ultimate test of whether they will maintain their faith at the price of torture and painful death. Cardinal Newman's writing style is often lively, and occasionally humorous, especially in his conversations. But there is no denying that modern readers may find parts of it quite wordy, particularly in the descriptions of geography (beware Chapter 1!). Most readers are likely to find themselves caring very much about the characters, and cheering for their victories, in addition to learning quite a bit about 3rd century history along the way. (summary by Carol Pelster)
For further information, including links to online text, reader information, RSS feeds, CD cover or other formats (if available), please go to the LibriVox catalog page for this recording.