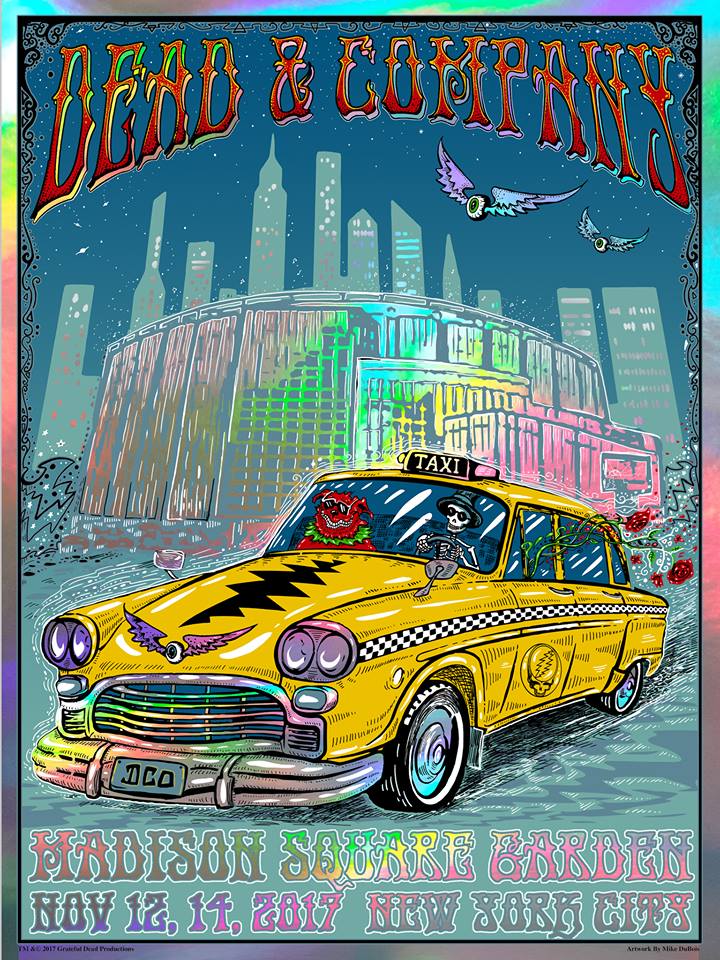 Reviewer: DustTizzle - favoritefavoritefavorite - November 18, 2017
Subject: way to Slow....
Im digging the shows and have been since they started in 2015 but that tempo they've been using since 2015 needs to be increased... very lethargic and tired sounding. Increase the TEMPO PLEASE!!!!!!
Reviewer: mdew77 - favoritefavoritefavoritefavoritefavorite - November 18, 2017
Subject: This is the one I had to find, excellent show
I've heard so many shows over the years, old bootleg tapes we cherished, mostly crowd noise until we learned to sit by the tapers and gently keep every quiet with a smile and kindness. Everyone wants to be good, just so excited.
This show was my favorite kind, it has the great riffs and the absolutely killer beautiful vocals and guitar solos that make you cry...this one in so many songs, Franklins Tower even had that beautiful John work. But China Doll and Stella Blue...cried during China D. love to see those 2 work that way together. .I fell apart during the latter. Stella Blue. My take on it was that Bobby was feeling shook up over forgetting most of the song during Uncle, and then singing Jerry's quintessential song, Stella Blue with such a heart-wrenching rendition, you just knew he was singing to Jerry. And John is so sensitive, he took care of the precious song and took care of Bob in it. If you listen to his sweet sweet guitar during it, he's loving the music to his heart and loving Bob, understanding the importance of it all and wanting Bob to succeed. The kind of guitar solo for the last couple minutes is almost like a lullaby to Bob and the music with energy, tho, not a quiet lullaby, a sobbing one. It was so loving and I fell apart. That is why we love this band. They love each other. haha. Seriously, I loved the show. I've heard so many great shows, but this one, with John, will go down as one of the very best in my book. It turned a corner...a quintessintial stella blue for bob, with john and bob. Did you see the say they stood so close in the last riff together and looked at each other with it was over, Bob looked loving for a split second and looked away and John smiled and was right there by his side. I think John wanted to be sure he was ok after Me and My Uncle. Bob's older and it scared me and I'm older. It meant a lot all around in so many ways many will miss and that's ok, but even Billly have that drum stick a slap a few times and he was hiding tears, so was Mickey. Sorry for so many words. Thanks for the perfect recording.Love. Bebli
Reviewer: natebernstein - favoritefavoritefavoritefavoritefavorite - November 17, 2017
Subject: They Keep Getting Better
This was my first post-Jerry Dead experience. I caught a bunch of early 90s shows, which were sometimes great and sometimes meh. I'd stayed away from Furthur, The Dead, etc. for a long time as it just didn't seem the same without Garcia. Being a fan of Mayer's playing, I was intrigued when he started playing with Bobby, and have enjoyed listening to Dead & Co. shows online the past couple of years. I think Mayer really understands and respects the music and its significance, and I'm so grateful that he and the rest of this band are keeping the fire burning and taking it to new levels.

I give this one five stars. Hard to say it's on par with the greatest of Grateful Dead shows from throughout the years, and surely my personal experience being there — just a few heads back in the GA pit, with a great friend who used to go to shows with me in the 90s — has a lot to do with my rating. But the performance is mostly sparkling. I agree with what the other reviewers have said about Space/Love Supreme. The comment about everything from Tennessee Jed being superb is spot on. I might extend it to Brown-Eyed Women, too. Me & My Uncle was a little rough for sure, but how many old-time Dead shows can one point to that have no lyric flubs whatsoever by either Jerry or Bob? Women Are Smarter was a great surprise to end the first set. A lot of us thought it would be Iko-Iko. Was this their first performance of Women?

The other highlight for me that no one has mentioned was Stella Blue. I have to admit that when I first started listening to the Fare Thee Well and Dead & Co. shows I wasn't crazy about Bob singing the Garcia songs. It's grown on me, though. And standing there watching them Tuesday night, it occurred to me that Bobby has been playing these songs an awful long time. They are a part of him and he is a part of them, even the ones that he didn't write and didn't sing lead on while Jerry was alive. So he has a strong connection to them, and hearing his interpretation of them vocally is cool. This Stella Blue is a great example. Maybe it was the couple of puffs I had of Js being passed around after 20 years of not smoking, but I was standing there crying like a baby as Bobby sang it and the band brought so much force behind him. I could feel Jerry in the room and it seemed so clear to me that Bobby was singing it for him. Thankfully St. Stephen/NFA and US Blues brought it all back home with rockin' joy.

Thank you, boys, and keep it up!
Reviewer: Joe Leverone - favoritefavoritefavoritefavoritefavorite - November 16, 2017
Subject: St. Stephen
Thank you for sharing the music. Really feels like John is exploring these songs more and more. St. Stephen has the sound of something he would play with John Mayer Trio. It's great that we can all explore this music together.
Reviewer: jr midtown - favoritefavoritefavoritefavorite - November 15, 2017
Subject: favorite Dead and Company show (so far)
Agree with everything mjcarpenter had to say. Of the 9 shows I've been to, this one seemed like the best by far. There are moments when John and Oteil (and Jeff) lock in together that are just magical, with tight/funky jams as good as anything Phish is putting out these days. Bobby needs to let Mayer do his thing more often, as that is when the magic happens (another example was the intro to "The Other One" on 11-12). Side note: before they go into "A Love Supreme" there is also a brief tease of Miles Davis' "So What?" Looking forward to the rest of the tour, and to seeing them again soon!
Reviewer: mjcarpenter - favoritefavoritefavoritefavoritefavorite - November 15, 2017
Subject: Smokin' show
My favorite Dead and Company show. The first few songs are a little rocky, but JM and Oteil have been on their own tours so they're kind of just now getting back to playing a lot. Everything from Tennessee Jed on is phenomenal. I think this is a milestone show for JM, he's really coming into his own as a guitar player in this band, he's getting everything right in this show. The only glaring problem is the mix, which Mayer overpowers. I love the reggae style Estimated. Help>Slip is short but so hot, and Franklin's is nothing less. The highlight of this show IMHO is Space, where at the end, the band begins to play John Coltrane's A Love Supreme. Incredible, brings tears to my eyes when Bobby does the "a love supreme" chant. Jeff is on fire for the jazz stuff too, I was at 6/13/2017 ATL when they did Milestones and I can't get enough of them. I know this is a rambling review, but I can't praise this show enough for them. Bobby is sounding young and happy, his guitar is higher in the mix than usual, and it is all around awesome. Must download.

Uploaded by cabinetmusic on November 15, 2017