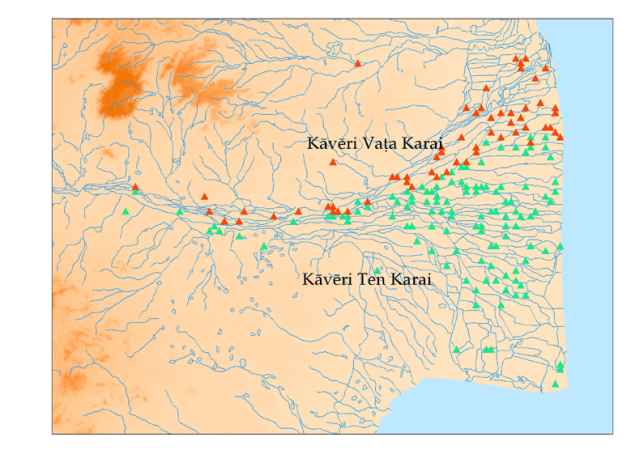 This home page is the starting point for accessing all the information contained on this CD. It answers basic questions (such as "What is the Tēvāram?"), technical questions ("What are the technical requirements?"), gives a short historical summary of the Digital Tēvāram project as well as a detailed description of the various groups of files that constitute the content of this CD.

This CD, which contains data in HTML format, has been tested on several types of computers (PC running Windows XP, and Macintosh running OS X). In order for the data to be usable by the widest possible range of users, the technical requirements have been kept as low as possible. As a starting point, the only software needed is a browser accepting frames (like for instance Internet Explorer, Firefox, Safari, etc.). HOWEVER, some of the pages (containing zoomable maps) can only be accessed by users having SVG compatible browsers (with the necessary plug-in installed); other users can only access the alternative (non-zoomable) maps. MOREOVER, the data being multilingual by nature (mixing freely words in Tamil script, words in English and words in transliterated Tamil), a font installation process might be required. For instance, if the string which appears on the following line between quotation marks:
"tōṭuṭaiya ceviyaṉ"
appears on your screen as "

The multi-media "Digital Tēvāram" program, was initiated in july 1997, with the purpose of being a continuation to a long-pending translation project of Tēvāram, that had been started in Pondicherry in the seventies and that had resulted in an unpublished ca. 3500 pages manuscript, containing an English rendering of the Tēvāram, in the talamuṟai order, authored by the late V.M. Subrahmanya Ayyar (1905-1981) and kept in the IFP library (Pondicherry) as well as in the EFEO library (Paris). In this document, which the author could unfortunately not fully revise in its present condition, because the last volumes are dated 1984, the English words are typewritten and the Tamil words are (quite legibly) handwritten in the spaces left blank by the typist. A precise description, page by page, of the content of 15 volumes of this manuscript can be found by clicking HERE!.

Over the years, the content of this CD, in earlier preliminary versions, has been made available to a few dozens of researchers in the field, in succesive "beta versions". For that reason, there are already a number of references to the "Digital Tevaram" in published articles and in PhD thesis.

A number of improvements are of course still possible, but it has nevertheless appeared that the project had attained sufficient maturity for it to be made commercially available to a wider public. Ulterior versions, if there is a demand for them, will of course take into account the remarks which will have been made to the editors by the users. Any suggestions for improvement, or any remarks on typing errors which could be found, should be sent to the general editor at the following address: "Jean-Luc Chevillard <jean-luc.chevillard@univ-paris-diderot.fr>".

The CD also contains an English rendering (or pre-translation) of the Tēvāram (tala muṟai/ தலமுறை), written by the late V.M. Subramanya Ayyar (VMS), when he was attached to the IFP, in 1976-1984. This translation had until now remained unpublished. It mixes the Tamil text and the English gloss.

On the geographical talamuṟai side, more than one hundred digital maps, showing the location of all the pāṭal peṟṟa stalam "places sung [in the Tēvāram]" (although their precise identification can sometimes be problematic), have been created by the IFP Geomatics Lab, and these have been electronically linked with the appropriate hymns by clickable hyperlinks. Some of those maps are Bit-Map images and others, more recently added, are zoomable maps, using the SVG standard.

On the other hand, on the paṇmurai side, more than one hundred audio recordings (totalling ca. 6 hours, in MP3 format) by several interpreters, in different styles, and illustrating the more than 20 different paṇ-s (or musical modes) are also available on the CD-ROM, and hyper-linked to the relevant hymns.

Future versions of this CD might for instance contain the concordance in Tamil script. All suggestions for improvement are welcome.

Detailed contents of this CD

The greater part of the contents of this CD can be most conveniently accessed through the items of the navigation menu which is found on the left side of the screen. These items are the following:

VMS biography
This page contains biographical data concerning VMS (V.M. Subramanya Ayyar), the author of the English rendering of Tēvāram which is included on this CD. These biographical data stem from his daughter, Mrs Nagalakshmi, and were collected by Jean-Luc Chevillard and S.A.S. Sarma.
Maps (SVG compatible)
This page is the starting page for a collection of maps, some of them zoomable, which allow the user to locate the various sites (தலங்கள்) to which the Tēvāram hymns are attached.
Maps (Other browsers)
This page is the starting page for a collection of non-zoomable maps, for the users who do not have SVG compatible browsers. These maps also allow the user to locate the various sites (தலங்கள்) attached to the Tēvāram hymns.
Temple pictures
This page shows pictures of some of the sites (தலங்கள்) in their present condition.
Place names
This page gives the traditional names of the sites in the alphabetical order (and also points to the talamuṟai (தலமுறை) order).
Audio samples
This section contains information pertaining to the paṇ-s (பண்), or musical modes, which are used in the Tēvāram hymns. It also contains links to 109 audio recordings illustrating those paṇ-s and confronting the users of the Digital Tēvāram CD with the variety of vocal styles that are met with today.
Interpreters
This section gives detailed lists of the hymns interpreted by the various performers who generously agreed to be recorded. Our warmest thanks to all of them.
Incipit-s
This section is an alphabetical listing of the first lines of all the hymns.
Mūvar Tēvāram
This section gives the text of the Tēvāram hymns, in the paṇmuṟai (பண்முறை) order, based on the French Institute of Pondicherry edition, prepared by T.V.Gopal Iyer.
English rendering
This section contains an English rendering of all the Tēvāram hymns, made by the late V.M. Subramanya Ayyar (VMS)
Concordance
This section contains, in alphabetical order, the ca. 200 000 occurrences of the ca. 45 000 word-forms that are met with in the Tēvāram. Each of these occurrences is linked with the corresponding passage in T.V.Gopal Iyer's edition (on which the concordance is based), and then with the English rendering by VMS. It can thus be used as a pre-dictionary of Tēvāram.
Credits
This page lists all the persons who have assisted the editor (Dr Jean-Luc Chevillard) and the assistant editor (Dr S.A.S. Sarma) in the preparation of this CD. Our warmest thanks to all of them.
Miscellaneous information
This page (not linked to the navigation menu) contains various informations on place names and administrative divisions of Tamil Nadu
Technical vocabulary
This page (not linked to the navigation menu) contains a compilation of various technical explanations given by VMS (mostly on prosody)
Abbreviations and bibliographical references