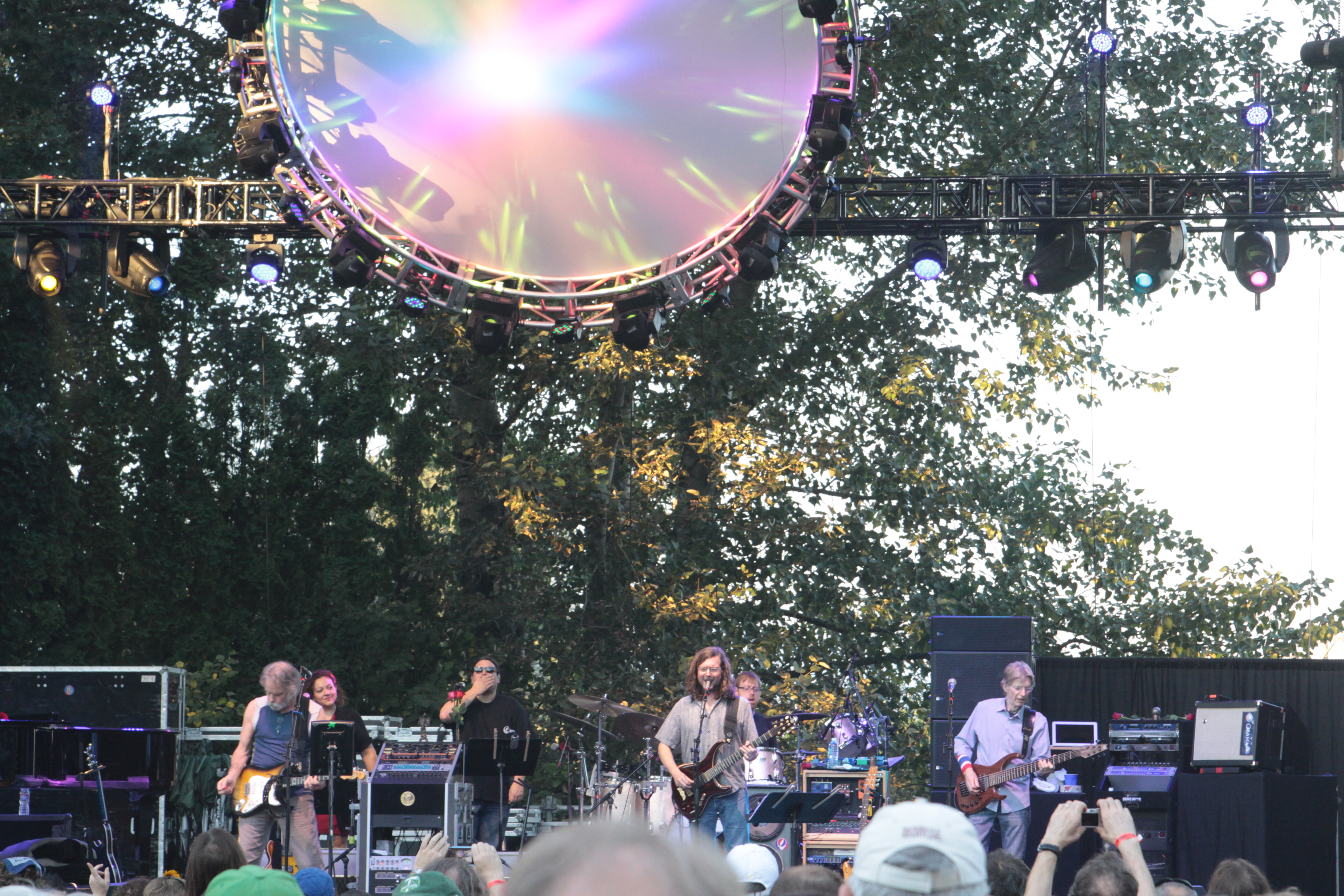 Reviewer: lionheart682 - favoritefavoritefavoritefavoritefavorite - October 3, 2012
Subject: If the thunder don't get ya then the lightning will!
A truly spectacular show with some rare gems mixed in along with the classics. Hard to Handle and Satisfaction were thoroughly enjoyable...and the Let it Grow was the best I've heard from Furthur thus far. They recaptured the classic dead sound on some tracks. I feel privileged to have been there! Thanks for getting the recording out so quickly, it sounds great!

Reviewer: mplsdeadhead92 - favoritefavoritefavoritefavorite - October 1, 2012
Subject: Edgefield Rocked!! (I know, I was there...)
This was definitely the highlight of my run of shows (Seattle and Portland). I noticed the "scratchiness" of Bobby's voice, but it really didn't impact my enjoyment of the show. The only repeat of the 4 shows for me was the Jack Straw, which was awesome both times. Jeff, John and Joe really showed their stuff..The jam at the end of Doin' That Rag really highlights how much they listen and react to each other. For me, Furthur has really achieved their own "Sonic Identity" apart from the Grateful Dead, and are worth a plane ticket to go see...

To all the really cool Heads in Seattle/Portland, thank you very much for creating a kind vibe/scene for us midwestern visitors.

Reviewer: AHHKAA - favoritefavoritefavoritefavorite - September 30, 2012
Subject: And even some MORE LOVE for the tapers!!
I totally agree with MadHatter93. You guys rock! Thanks so much for your time, energy and skills.. You are truly givers!

This show sounds GRATE. 4.5 star, but they don't have that choice.

...from another Floridian who very much misses seeing this band and can't afford to travel for it.. Thankful for the times I have and the continued wealth of music.

Here's To Our Highness!

Reviewer: MadHatter93 - favoritefavoritefavoritefavorite - September 30, 2012
Subject: Love for the tapers
Just writing a shout out to all the tapers here on archive.org. Your work and dedication is very much appreciated. There is nothing better than waking up and being able to listen to Furthur's performance from the previous night at work the next day. The quality is wonderful and the band sounds strong.

If only they would swing through Florida!

Reviewer: Stellablu122 - favoritefavoritefavorite - September 29, 2012
Subject: Some strong stuff
I have to agree there are some significant moments during this show. The first set features a splendid extended solo by John on Crazy Fingers and the LL Rain is quite special.
Satisfaction is fun, the crowd loves it, but Bob's voice is scratchy on this night and continues through the show.

Mid second set is the high light for sure as the Hard to Handle is really cranking and the squence of Let it Grow>Wheel> Comes a Time is quite noteworthy.
The ending Franklin's is not bad but feel maybe they need to move that back to other parts of the show.
The Baby Blue features a sparkling solo from John that is maybe the high light of the set.It is so full of intense engergy as these newer Baby Blues are getting better but still are not as emotionally powerful as they once were in the latter half of '94. The pacing of this song still needs some improvements it just not flowing as it should IMHO.

Been too busy listening to my recording of the show to stop and master it.

This is one of the best exacuted shows I have seen in a while.
Second set was as good as it gets.
While no one can replace Jerry...this has the same energy and I believe that Jerry is smiling from heaven
It took the band members close to 10 years after Jerry;s passing to get songs like let it grow or the other one to really fly.

Well well well you can never tell...
Reviewer: zenm00n - favoritefavoritefavoritefavoritefavorite - September 29, 2012
Subject: impressive
Another brilliant aud. and another awesome Futhur show. Firing on all cylinders from the start with "Shakedown" and "Stranger". Good flowing song selection, supreme playing all around. And ofc some great jams.

Luckily the band seems to have picked up where they left with their great summer run. And by the way:I feel really sorry for the 'haters' who can not hear what an excellent guitarist John Kadlecik is (in his own right).