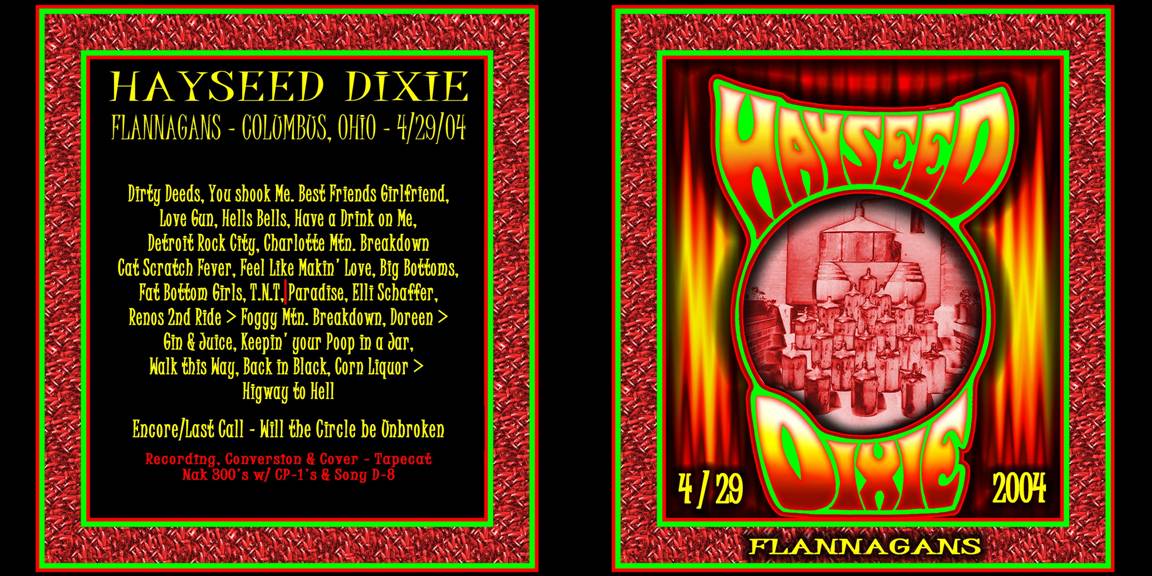 Reviewer: gratefulfan - favoritefavoritefavorite - June 15, 2004
Subject: Good music, but needs to be SBD
I hate to make any negative comments, especially after our friend took the time to write such an enthusiastic review, and I'm sure that it sounded great THERE, but the recording has a good bit of crowd noise and sounds a bit cave-like. The music's good, nothing bad to say about the band, but until there's a sbd, this show might not deserve a five star rating.

Reviewer: rioblanco - favoritefavoritefavoritefavoritefavorite - May 7, 2004
Subject: HAYRIDE TO HELL!!!!!
Tapecat, you've struck again with the precision of a john deere plowin' thru a field of wild hellions!!! The ol' boys just keep getting hotter and hotter so, once again, it's time to bust out another six-pack, undo your overalls, slip off your boots and dance your ass off to these mofos!!! Move over Motown, it's time for Haytown. Keep 'em comin' tapecat.

Well folks I can tell you that this band is now on another level! The show that just occurred in Columbus was simply put, KILLER! It went something like this..

Opening the show the Boys laid down the triple threat of Dirty Deeds, You Shook Me & Best Friends Girlfriend. This had the crowds attention right of the bat. Love Gun came next, Ive only seen em do this one once before and I dig it. The way they do it is kinda more country like, a very catchy tune.

OK now heres where things really start to get different. When Hells Bells opens its with the drummer and the Desk Bell, watching Nick you can seen the enthusiasm right away! He plays the bell as if its for Bill Monroe hisself! Its also during this tune that you can start to really hear a difference in the Bass as well. There is a F-U-N-K-Y Detroit Big City sort of feel to his playing that is very cool in the mix! Oh and although hes NOT from the hills, he IS from a place that has a little song written about itDetroit Rock City..Which they played right after a NICE Drink on Me full of toasting and schwilling.

So now its the time in the show to as John put it, Have your head Squashed like the Melon that it is! The Charlotte Mountain Breakdown is as always SCORCHING !! Cat Scratch Fever is a tune I had heard at my first show and then not for a long time, Im glad its back in the mix!

Its the Booty portion of the show with Big Bottoms & Fat Bottom Girls, Damn I love those additional lyrics! ;)

Then comes a Hot T.N.T. into the Wheelers Choice/Bathroom BreakParadise. It is also where the Change in the Rhythm Section becomes VERY apparent! As the band comes back on the stage and morph into the Seedy Boys the sound became Much Fuller than it has been in the past. That Funky Bass mixed with Nicks Jamband oriented style of play is a PERFECT fit for the Champions of Drinkin, Cheatin, Killin, & Hell!

Ellie Schaffer is and always will be the Kitten Fav, and tonight it was killer as always. The Shady groveLawd have MERCY! SO friggin Bad Ass, after it was over I turned to my friends and said, Ill bet youll NEVER be able to listen to that song in quite the same way again right? A BIG affirmative was the answer.

Man all this has just lead up to the BIG jaw dropper for me. RENOS 2nd RIDE is Face tearing, Mind melting stuff my friends! What a GREAT sounding tune this thing was, and then they went intoThe genetic blood meld experiment..The Foggy Mountain Breakdown. To start it off John has those 2 boys do the duely banjo trick where Dons picking with one hand & Dale fingers the strings with the other. To watch that on any night is amazing and on this particular night John challenged the boys with a Huge increase in speed.Flawless folks! Oh and Nick.Killer solo my friend!

But it doesnt stop there..The Doreen.aaaaaaaaaarrrrrrrrrrrrrrgggggggggghhhhhhhhhh SO figgin HOT!....into.the much polished Gin & Juice, Oh man what a Blast! To slow thing down a bit a breather on could say came the Poop in a Jar, man you just had to see Fark & Jim slow dancing to this one folks.$10 ticket, $25 Bar TabJim & Fark slow dancing = PRICELESS!
BWAHAHAHAHAHAHA!

Walk this Way was a lotta fun, but MAN the Back in Black..WOW man what a Cool version. Talking with John I came to find out that they changed up the arrangement if it ON Stage, that in it self is proof in the pudding why Nick and Tim fit better in the band. The tune was significantly different, yet I didnt see any confusion, only a zeal for the change everyone throwing in a top notch attempt at it. Turned out Stellar and I had to compliment them for it after.

To Close out the show, Corn Liquor > Highway to Hell. Lawd, Lawd, Lawd, I digs me some Corn Liquor!!!!!! I really cant get enough of that thing it is a GREAT song my friend and yall play it so damn Good!!!! Oh and that way into THE most impressive Highway I have seen laid down yet. This tune is almost always the last and for good reason, its the BIG GUN, fast & furious playing and the band members solo and fade off the stage. Nick & Tim were amazing, period. Their enthusiasm seems to have infected everyoneThat was one hell of a Rippin Good Time Boys!

For Last Call.Will the Circle be Unbroken, best I have ever seen em do it, again with the PERIOD!

This is tied with the Mercy Lounge show as the Best I have ever seen em, which is GREAT cause that is with Brand New Band members. Holy Crap I cant wait to see them a bunch more this year and watch the progression of this band. I know theres gonna be New songs, and maybe some new Old Standards..Damn I am EXCITED!

A toastDave & Chad, Here to ya guys thanks for doing your part in keeping this here Hayride goin!

Nick & Tim, Here to ya, yall are SMOKIN and Im lookin forward to hearin more!