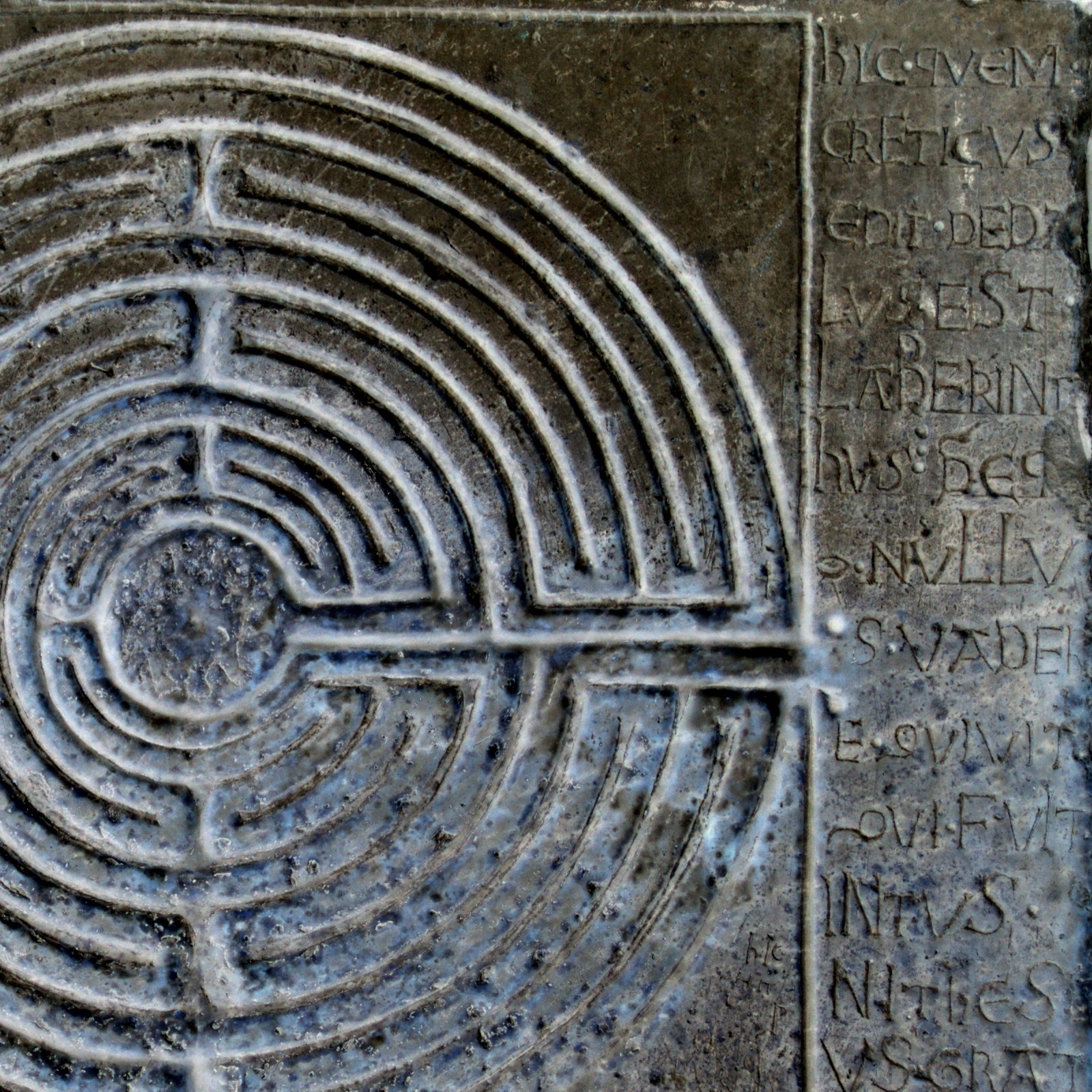 Legendary Passages #0039 - The Odes of Athens -
Athenian Youths and Maidens, from The Odes of Bacchylides.

Last time we heard briefly how Theseus got the Crown of Amphitrite. This time we expand on that story, how Aegeus first hears of his son, and a fragment of the story of Io.

The first Ode begins as the ship carrying the tribute of seven youths and seven maidens was on its way to Crete. King Minos desires the young Eriboea, daughter of Alcathous, but she rejects him loudly. Theseus confronts the King, who mocks the boy's parentage and challenges him to retrieve a gold ring he drops overboard. Theseus dives in, and dolphins take him to the Halls of the Nerieds, and he meets the goddess Amphitrite, who gives him purple robes and a rosy crown. Theseus returns to the ship, with ring and godly gifts, and the youths cheer him on.

The second Ode is more like a classic Greek play, with a chorus and King Aegeus talking to each other about rumors of young Theseus heading for Athens. First the chorus asks why King Aegeus is preparing for an enemy. Aegeus heard from a herald who said a man of might approaches, and recounted his deeds. The chorus is intrigued, and asks if he leads an army. No, says the King, only two others, describes his weapons and his looks, and notes that the warrior is on his way there.

The last Ode is a fragment entitled Io, for the maiden who was loved by Zeus and turned into a cow. She was held prisoner by Argus Panoptes, a giant with a hundred eyes, the perfect watchman. Zeus sent Hermes, messenger of the gods, to kill the watcher and free the maiden. Io eventually comes to Egypt, and gave birth to Epaphus, father of Libya, father of Agenor, father of Cadmus and Europa. From Cacmus came Semele, mother of Dionysus, and here the fragment ends, the ending lost to history.

Next time we shall hear still more of Ariadne's Crown, and the other Stars of Athens.


The Odes of Athens
a Legendary Passage
from The Odes of Bacchylides,
translated by Sir RICHARD C. JEBB

Theseus,
Or the Athenian Youths and Maidens.


A dark-prowed ship was cleaving the Cretan sea, bearing
Theseus, steadfast in the battle din, with seven goodly youths
and seven maidens of Athens; for northern breezes fell on
the far-gleaming sail, by grace of glorious Athena with warlike
Aegis.

And the heart of Minos was stung by the baneful gifts of
the Cyprian goddess with lovely diadem; he could no longer
restrain his hand from a maiden, but touched her fair cheeks.
Then Eriboca cried aloud to Pandio's grandson with breastplate
of bronze; Theseus saw, and wildly rolled his dark eyes beneath
his brows, and cruel pain pricked his heart as he spake:-

'O son of peerles Zeus, the spirit in they breast no longer
obeys righteous control; withhold, hero, thy presumptuous force.
'Whatever the restless doom given by the gods has decreed
for us, and the scale of Justice inclines to ordain, that appointed
fate we will fulfill when it comes. But do thou forgear thy
grievous purpose. If the noble daughter of Phoenix, the maiden
of gracious fame, taken to the bed of Zeus beneath the brow
of Ida, bare thee, peerless among men;
yet I, too, was borne by the daughter of wealthy Pittheus, in
wedlock with the sea-god Poseidon, and the violet-crowned
Nereids gave her a golden veil.

'Therefore, O war-lord of Cnosus, I bid thee restrain thy
wantonness, fraught with woe; for I should not care to look
on the fair light of divine Eos, after thou hadst done violence
to one of this youthful company: before that, we will come
to a trial of strength, and Destiny shall decide the sequel.'

Thus far the hero valiant with the spear: but the seafarers
were amazed at the youth's lofty boldness; and he whose bride
was daughter of the Sun-god felt anger at his heart; he wove
a new device in his mind, and said: —

'O Zeus, my sire of great might, hear me! If the white-armed
daughter of Phoenix indeed bare me to thee, now send forth from
heaven a swift flash of streaming fire, a sign for all to know.
And thou, if Troezenian Aethra was thy mother by earth-shaking
Poseidon, cast thyself boldly down to the abode of thy sire,
and bring from the deep this ring of gold that glitters on my
hand. But thou shalt see whether my prayer is heard
by the son of Cronus, the all-ruling lord of thunder.'

Mighty Zeus heard the unmeasured prayer, and ordained a
surpassing honour for Minos, willing to make it seen of all men,
for the sake of his well-loved son. He sent the lightning. But
the steadfast warrior, when he saw that welcome portent, stretched
his hands towards the glorious ether, and said:

'Theseus, there thou beholdest the clear sign given by Zeus.
And now do thou spring into the deep-sounding sea; and the
son of Cronus, king Poseidon, thy sire, will assure thee supreme
renown throughout the well-wooded earth.'

So spake he : and the spirit of Theseus recoiled not;
he took his place on the well-built stern, and sprang thence,
and the domain of the deep received him in kindness.

The son of Zeus felt a secret awe in his heart, and gave
command to keep the cunningly-wrought ship before the wind;
but Fate was preparing a different issue.

So the bark sped fast on its journey, and the northern breeze,
blowing astern, urged it forward. But all the Athenian youths and
maidens shuddered when the hero sprang into the deep; and
tears fell from their bright young eyes, in prospect of their
grievous doom.

Meanwhile dolphins, dwellers in the sea, were swiftly bearing
mighty Theseus to the abode of his sire, lord of steeds; and he
came unto the hall of the gods. There beheld he the glorious
daughters of blest Nereus, and was awe-struck; for a splendour
as of fire shone from their radiant forms; fillets inwoven with
gold encircled their hair; and they were delighting their hearts
by dancing with lissom feet

And in that beautiful abode he saw his father's well-loved
wife, the stately, ox-eyed Amphitrite; who clad him in gleaming purple,
and set on his thick hair a choice wreath, dark with roses, given
to her of yore at her marriage by wily Aphrodite.

Nothing that the gods may ordain is past belief to men of a
sound mind. Theseus appeared by the ship with slender stern.
Ah, in what thoughts did he check the war-lord of Cnosus,
when he came unwetted from the sea, a wonder to all, his form
resplendent with the gifts of the gods! The bright-throned
Nereids cried aloud with new-born gladness;
the deep resounded ; while the youths and maidens hard by
raised a paean with their lovely voices.

God of Delos, may the choruses of the Ceans be pleasing to
thy soul; and mayest thou give us blessings for our portion,
wafted by thy power divine!

Chorus.
King of sacred Athens, lord of the delicately
living lonians, why has the trumpet lately sounded a war-note
from its bell of bronze?

Is the leader of a hostile army besetting the borders of our
land? Or are robbers, devisers of evil, driving off our flocks of
sheep perforce, in despite of the shepherds? Or what is the
care that gnaws thy heart? Speak; for thou, methinks, if any
mortal, hast the aid of valiant youth at hand, O son of Pandion
and Creusa.

Aegeus.
A herald has lately come, whose feet have traversed
the long road from the Isthmus ; and he tells of prodigious deeds
by a man of might.

That man has slain the tremendous Sinis, who was foremost
of mortals in strength, offspring of the Earth-shaker, the Lytaean
son of Cronus. He has laid low the man-killing sow in Crem-
myon's woods, and the wicked Sciron.

He has closed the wrestling-school of Cercyon. The mighty
hammer of Polypemon has dropped from the hand of the
Maimer, who has met with a stronger than himself I fear how
these things are to end.

Ch.
And who and whence is this man said to be, and how
equipped? Is he leading a great host in warlike array? Or
travelling with his servants only, like a wayfarer who wanders
forth to a strange folk, — this man so vigorous, so valiant, and so
bold, who has quelled the stubborn strength of such foes ? Verily
a god is speeding him, so that he shall bring a rightful doom on
the unrighteous ; for it is not easy to achieve deed after deed
without chancing upon evil.
In the long course of time all things find their end.

Aeg.
Only two men attend him, says the herald. He
has a sword, with ivory hilt, slung from his bright shoulders : he
carries in his hands a couple of polished javelins; a well-wrought
Laconian bonnet covers his ruddy locks ; around his breast he
wears a purple tunic and a thick Thessalian mantle. A fiery
light, as of the Lemnian flame, flashes from his eyes: a youth
he is in earliest manhood, intent on the pastimes of Ares,
-on warfare and the clangour of battle; and he seeks brilliant Athens.

A thousand paths of poesy divine are open to him who has
received gifts from the Muses of Pieria, and whose songs have
been clothed with worship by the dark-eyed Graces who bring
the wreath.

Weave, then, some glorious lay in Athens, the lovely and the
blest, thou Cean fantasy of fair renown. A choice strain should
be thine, since Calliope has given thee a meed of signal honour.

There was a time when, by the counsels of wide-ruling Zeus
most high, the heifer precious in his sight, — the rosy-fingered
maid born to Inachus, — was flying from Argos nurse of steeds:

when Argus, looking every way with tireless eyes, had been
charged by the great queen, Hera of golden robe, to keep
unresting, sleepless ward o'er that creature with the goodly horns.
Nor could Maia's son elude him in the sun-lit days or in the holy
nights.

Did it befall then that the
swift messenger of Zeus slew huge Argus, Earth's fierce offspring,
[in combat]? Or did the watcher's unending cares [close his dread
eyes;] or was he lulled to rest from weary troubles by the sweet
melody of the Pierian sisters?

For me, at least, the surest path of song [is that which leads
me to the end]; when lo, driven by the gadfly, reached the flowery
banks of Nile, bearing in her womb Epaphus, child of Zeus.

There she brought him forth, to be glorious lord of the linen-
robed folk, a prince flourishing in transcendent honour; and
there she founded the mightiest race among men. From that
race sprang Cadmus, son of Agenor, who in Thebes of the seven
gates became father of Semele. And her son was Dionysus,
inspirer of Bacchants, [king of joyous revels] and of choruses
that wear the wreath...

Uploaded by Legendary Passages on September 9, 2015