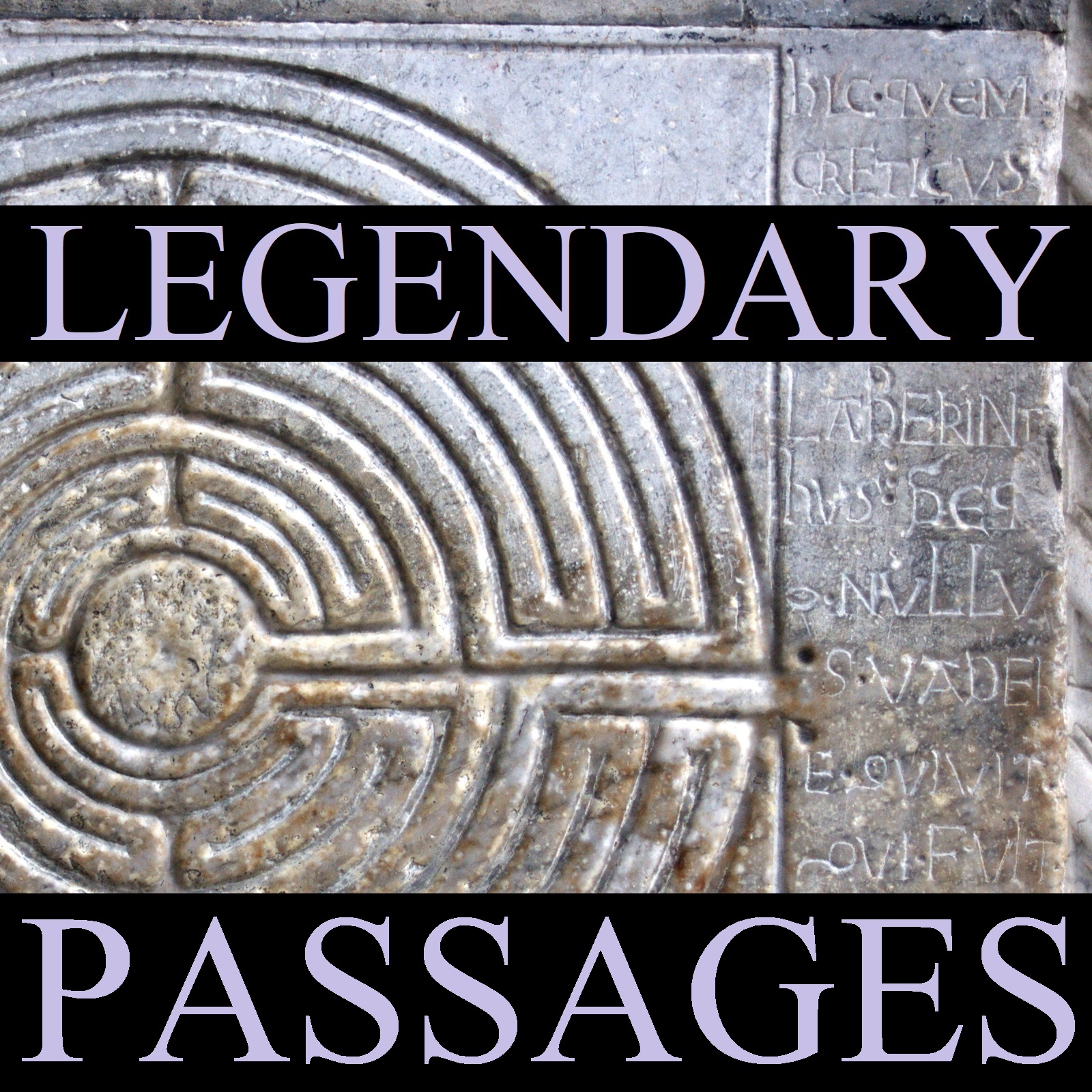 Previously, Theseus found his father's sword and sandals, killed the Marathonian Bull, and volunteered for the Tribute of Minos. In this passage we hear more of those stories, as well as exploring the Acropolis of Athens.

After the Erectheum and the image of Athena is a golden lamp that burns for an entire year without being refilled. After the Temple of Athena, Pausanias describes the strange ritual of the Bearers of the Sacred Offerings. Next are statues of Tolmides, a burned Athena, and Cycnus fighting Heracles.

Many legends of Theseus are chronicled here. When Heracles was visiting Troezen and set aside his lion skin, a seven-year-old Theseus attacked it with an axe. When he was sixteen, he rolled away the rock and found his father's tokens. After Heracles had conquered the Cretan Bull, it was set loose on the mainland, killing the son of Minos before being sacrificed by Theseus. Minos went to war with Athens, and ultimately demanded seven girls and seven boys to be taken to the Minotaur in the Labyrinth at Knossos.

a Legendary Passage from,

Endoeus was an Athenian by birth and a pupil of Daedalus, who also, when Daedalus was in exile because of the death of Talos, followed him to Crete. Made by him is a statue of Athena seated, with an inscription that Callias dedicated the image, but Endoeus made it.

There is also a building called the Erechtheum. Before the entrance is an altar of Zeus the Most High, on which they never sacrifice a living creature but offer cakes, not being wont to use any wine either. Inside the entrance are altars, one to Poseidon, on which in obedience to an oracle they sacrifice also to Erechtheus, the second to the hero Butes, and the third to Hephaestus. On the walls are paintings representing members of the clan Butadae; there is also inside – the building is double – sea-water in a cistern. This is no great marvel, for other inland regions have similar wells, in particular Aphrodisias in Caria. But this cistern is remarkable for the noise of waves it sends forth when a south wind blows. On the rock is the outline of a trident. Legend says that these appeared as evidence in support of Poseidon's claim to the land.

Both the city and the whole of the land are alike sacred to Athena; for even those who in their parishes have an established worship of other gods nevertheless hold Athena in honor. But the most holy symbol, that was so considered by all many years before the unification of the parishes, is the image of Athena which is on what is now called the Acropolis, but in early days the Polis (City). A legend concerning it says that it fell from heaven; whether this is true or not I shall not discuss.

A golden lamp for the goddess was made by Callimachus.

Having filled the lamp with oil, they wait until the same day next year, and the oil is sufficient for the lamp during the interval, although it is alight both day and night. The wick in it is of Carpasian flax, the only kind of flax which is fire-proof, and a bronze palm above the lamp reaches to the roof and draws off the smoke. The Callimachus who made the lamp, although not of the first rank of artists, was yet of unparalleled cleverness, so that he was the first to drill holes through stones, and gave himself the title of Refiner of Art, or perhaps others gave the title and he adopted it as his.

XXVII. In the temple of Athena Polias (Of the City) is a wooden Hermes, said to have been dedicated by Cecrops, but not visible because of myrtle boughs. The votive offerings worth noting are, of the old ones, a folding chair made by Daedalus, Persian spoils, namely the breastplate of Masistius, who commanded the cavalry at Plataea, and a scimitar said to have belonged to Mardonius. Now Masistius I know was killed by the Athenian cavalry. But Mardonius was opposed by the Lacedaemonians and was killed by a Spartan; so the Athenians could not have taken the scimitar to begin with, and furthermore the Lacedaemonians would scarcely have suffered them to carry it off.

About the olive they have nothing to say except that it was testimony the goddess produced when she contended for their land. Legend also says that when the Persians fired Athens the olive was burnt down, but on the very day it was burnt it grew again to the height of two cubits.

I was much amazed at something which is not generally known, and so I will describe the circumstances. Two maidens dwell not far from the temple of Athena Polias, called by the Athenians Bearers of the Sacred Offerings. For a time they live with the goddess, but when the festival comes round they perform at night the following rites. Having placed on their heads what the priestess of Athena gives them to carry – neither she who gives nor they who carry have any knowledge what it is – the maidens descend by the natural underground passage that goes across the adjacent precincts, within the city, of Aphrodite in the Gardens. They leave down below what they carry and receive something else which they bring back covered up. These maidens they henceforth let go free, and take up to the Acropolis others in their place.

By the temple of Athena is . . . an old woman about a cubit high, the inscription calling her a handmaid of Lysimache, and large bronze figures of men facing each other for a fight, one of whom they call Erechtheus, the other Eumolpus; and yet those Athenians who are acquainted with antiquity must surely know that this victim of Erechtheus was Immaradus, the son of Eumolpus.

On the pedestal are also statues of Theaenetus, who was seer to Tolmides, and of Tolmides himself, who when in command of the Athenian fleet inflicted severe damage upon the enemy, especially upon the Peloponnesians who dwell along the coast, burnt the dock-yards at Gythium and captured Boeae, belonging to the “provincials,” and the island of Cythera. He made a descent on Sicyonia, and, attacked by the citizens as he was laying waste the country, he put them to flight and chased them to the city. Returning afterwards to Athens, he conducted Athenian colonists to Euboea and Naxos and invaded Boeotia with an army. Having ravaged the greater part of the land and reduced Chaeronea by a siege, he advanced into the territory of Haliartus, where he was killed in battle and all his army worsted. Such was the history of Tolmides that I learnt.

There are also old figures of Athena, no limbs of which indeed are missing, but they are rather black and too fragile to bear a blow. For they too were caught by the flames when the Athenians had gone on board their ships and the King captured the city emptied of its able-bodied inhabitants. There is also a boar-hunt (I do not know for certain whether it is the Calydonian boar) and Cycnus fighting with Heracles. This Cycnus is said to have killed, among others, Lycus a Thracian, a prize having been proposed for the winner of the duel, but near the river Peneius he was himself killed by Heracles.

One of the Troezenian legends about Theseus is the following. When Heracles visited Pittheus at Troezen, he laid aside his lion's skin to eat his dinner, and there came in to see him some Troezenian children with Theseus, then about seven years of age. The story goes that when they saw the skin the other children ran away, but Theseus slipped out not much afraid, seized an axe from the servants and straightway attacked the skin in earnest, thinking it to be a lion.

This is the first Troezenian legend about Theseus. The next is that Aegeus placed boots and a sword under a rock as tokens for the child, and then sailed away to Athens; Theseus, when sixteen years old, pushed the rock away and departed, taking what Aegeus had deposited. There is a representation of this legend on the Acropolis, everything in bronze except the rock.

Another deed of Theseus they have represented in an offering, and the story about it is as follows– The land of the Cretans and especially that by the river Tethris was ravaged by a bull. It would seem that in the days of old the beasts were much more formidable to men, for example the Nemean lion, the lion of Parnassus, the serpents in many parts of Greece, and the boars of Calydon, Eryrmanthus and Crommyon in the land of Corinth, so that it was said that some were sent up by the earth, that others were sacred to the gods, while others had been let loose to punish mankind. And so the Cretans say that this bull was sent by Poseidon to their land because, although Minos was lord of the Greek Sea, he did not worship Poseidon more than any other god.

They say that this bull crossed from Crete to the Peloponnesus, and came to be one of what are called the Twelve Labours of Heracles. When he was let loose on the Argive plain he fled through the isthmus of Corinth, into the land of Attica as far as the Attic parish of Marathon, killing all he met, including Androgeos, son of Minos. Minos sailed against Athens with a fleet, not believing that the Athenians were innocent of the death of Androgeos, and sorely harassed them until it was agreed that he should take seven maidens and seven boys for the Minotaur that was said to dwell in the Labyrinth at Cnossus. But the bull at Marathon Theseus is said to have driven afterwards to the Acropolis and to have sacrificed to the goddess; the offering commemorating this deed was dedicated by the parish of Marathon.

This passage continues exploring Athens, but in our next episode Theseus sails for Crete with the Athenian Youths.

Uploaded by Legendary Passages on July 1, 2019