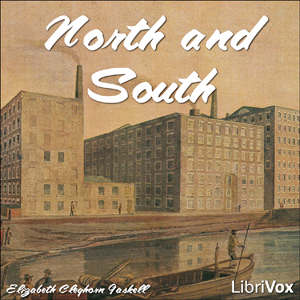 LibriVox recording of North and South, by Elizabeth Cleghorn Gaskell.

The book is a social novel that tries to show the industrial North and its conflicts in the mid-19th century as seen by an outsider, a socially sensitive lady from the South. The story: the heroine, Margaret Hale, is the daughter of a Nonconformist minister who moves to the fictional industrial town of Milton after leaving the Church of England. The town is modeled after Manchester, where Gaskell lived as the wife of a Unitarian minister.

The change of lifestyle shocks Margaret, who sympathizes deeply with the poverty of the workers and comes into conflict with John Thornton, the owner of a local mill, also a friend of her father. After an encounter with a group of strikers, in which Margaret attempts to protect Thornton from the violence, he proposes to her, telling her that he is in love with her; she rejects his proposal of marriage, mainly because she sees it as if it were out of obligation for what she had done. Later, he sees her with her fugitive brother, whom he mistakes for another suitor, and this creates further unresolved conflict. Margaret, once she believes she has lost his affection, begins to see him in another light, and eventually they are reunited.
Wikipedia.

Reviewer: ListeninginChicago - favoritefavoritefavoritefavorite - July 24, 2009
Subject: Best Librivox version of an excellent novel
It was Richard Armitage's BBC portrayal of Mr. Thornton that first interested me in North and South. I have been a fan ever since. If you enjoy Jane Austen, I think you will also enjoy this mixture of social commentary and love story. Janine Barchas published a thoughtful analysis of the connection between Austen and Gaskell in an article for the journal of the Jane Austen Sociaty of North America (North and South: Austen’s Early Legacy, by Janine Barchas, Persuasions vol. 30 (2008)). I'm not a lit major, but could appreciate the parallels once Barchas pointed them out to me. Like Austen, Gaskell is an author that you can enjoy on multiple levels. If you're looking for a good story on the surface - this is one. If you're looking for deeper social commentary from a woman's perspective, this also suits. So overall, I have the highest praise for the book.

Librivox has two collaborative versions of North and South posted. This is the second. Lee Ann Howlett reads many chapters and does an excellent job. There are several readers who are difficult to listen to (either because of style or sound quality), but for the most part, it is a well done collaboration. Version 1 had readings by a number of excellent Librivox stalwarts, but overall, I think version 2 is easier to listen to.

There is a version 3 in the works at Librivox.org - it's being done as a solo project and is about half done as I write this. It's easy enough to sample a chapter on line and see how you like that reader's style. I personally like the variety of readers in version 2 and so will stick with that one as my "favorite."

Uploaded by librivoxbooks on November 25, 2007