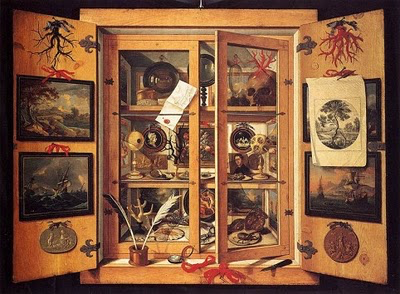 The cabinet of curiosities, or Wunderkammer (wonder cabinet) displayed personal collections of specimens, artifacts and oddities beginning in the 17th century. These collections showcased small, yet wondrous worlds and served as precursors to the museum.

This elegant, historic inn located in California has served as a gambling parlor, brothel, speakeasy and was a favored place among early Hollywood celebrities. It is believed that some former guests of the hotel like the Glen Tavern so much, they have checked in for an eternal stay... Listen to The Glen Tavern Inn: Where the Past Comes Alive Host, Sarah, in the lobby of the Glen Tavern Inn with members of the American Paranormal Research Association __________ Top photo by Jeffrey Earle for the...

A personal story from The Cabinet's own hostess, about a mysterious possession belonging to a Hollywood legend. Listen to "The Vile Vial" now!

The historic Stanley Hotel, in Estes Park, Colorado offers up a rich and fascinating history and provided the inspiration for one of the most iconic horror stories and films of all time - The Shining. Listen now!! - The Stanley Hotel: Of Cars and Kings By Shane Parker

This Valentine's Day we bring you a story containing one part vixen, one part teen sex slave and garnish it with some Grade A Crazy - listen to Bat Man now! Dolly and Otto's story inspired two movies, the first was The Bliss Of Mrs. Blossom, starring Shirley Mac Laine and a favorite here at The Cabinet, Patricia Routledge. The second film was Man In The Attic, starring Neil Patrick Harris. Oh My. Yes, it's as hilarious as it seems. You really should watch the trailer.

Cabinet Of Curiosities Podcast
January -The Season Of The Witch
Jan 6, 2012 by Sarah Troop
audio

In January skies a myriad of stars hang cold in the night, but there too, are witches Her red, red lips curved up into a smile of such beauty, such brilliance, such pure and perfect happiness that it would have frozen your blood in your veins to have seen it. And the wind of the mountain pass howled about her triumphantly, as if in answer...as the children fled. (adapted from Neil Gaiman's Stardust) The first Cabinet episode of 2012, January - The Season Of The Witch is available now!

Cow molestation, spontaneous fires and Sir Arthur Conan Doyle - The Fire Spook (although, I really wanted to call this episode "Old Macdonald Had A Farm, and on That Farm He Had a Spook!"). Listen now - The Fire Spook

The first of our All Hallow's Read series, where the Cabinet offers up a creepy, fictional tale from some of our favorite authors in celebration of Halloween. The Witch is a short story from Shirley Jackson, who Stephen King dubbed "The Godmother Of Horror." Although you probably do not recognize her name, you've likely read her story, The Lottery or experienced the far reaching influence of her book The Haunting Of Hill House. Disney's Imagineers were so taken by Hill House, they...

DESCRIPTION
The cabinet of curiosities, or Wunderkammer (wonder cabinet) displayed personal collections of specimens, artifacts and oddities beginning in the 17th century. These collections showcased small, yet wondrous worlds and served as precursors to the museum.
The Cabinet Of Curiosities Podcast curates a collection of the extraordinary and the mysterious.

Archived from iTunes at https://itunes.apple.com/us/podcast/cabinet-of-curiosities-podcast/id419656598. Items in this collection are restricted.
ACTIVITY