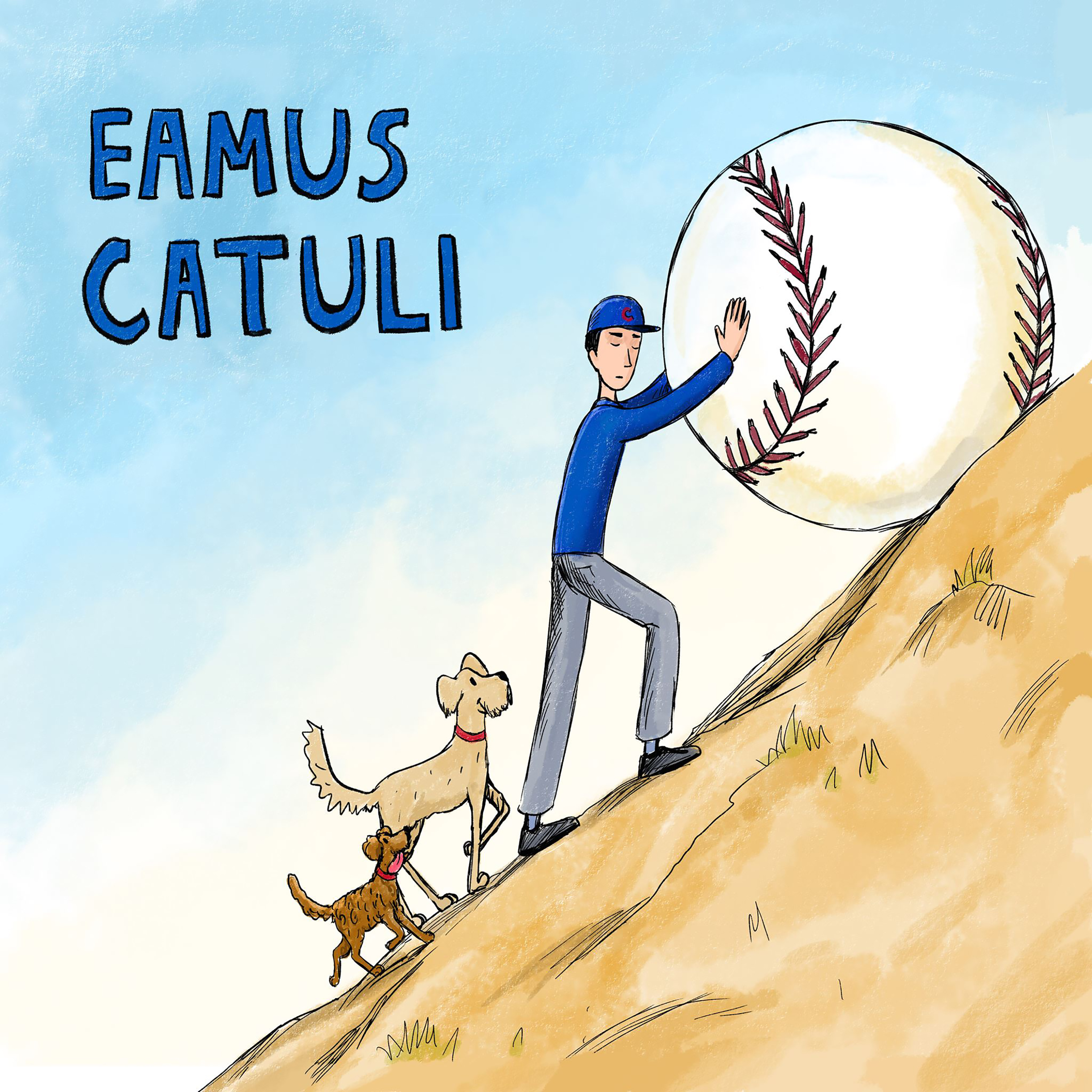 A lifelong Cubs fans uphill battle during the season of highest expectations...

On this final episode of Eamus Catuli, Andy puts a bow on the 2016 Championship Cubs and shares his thoughts on 2017 and beyond…

Andy still isn’t convinced that he didn’t die and that this isn’t heaven. And if so, he’s fine with it.

This is the podcast episode Andy was born to host. Come chug some Cubby Kool-Aid to calm your nerves.

Two wins shy of the promised land, Andy fights to keep sane. It hasn’t been easy.

World Series, 1-1. – The Cubs and Indians are tied, but Andy is very optimistic as the World Series heads to Wrigley Field.

World Series Preview – It’s Real. It’s Happening. Let’s Do This. Andy fought off laryngitis to give his preview of Cubs/Indians.

NLCS 3-2. With the Cubs on the verge of history regardless, Andy is calmer and more optimistic than would be expected. He must have upped his meds.

NLCS 1-1. – Andy can’t decide if it’s a roller coaster or a scary hayride, but, he’s determined to stay optimistic and have fun. Cubs/Dodgers is turning out to be a classic.

NLCS Preview – Andy is still reliving the roller coaster from games 3 & 4 with the Giants, plus Cubadaweek and a look at the NLCS with the Dodgers.

NLDS 2-0. A disturbingly optimistic Andy has a lot to say about the series so far with the SF Giants.

103-58. The regular season is over and Andy looks to the playoffs with a rallying cry worthy of "Braveheart".

101-57. A strange Cubadaweek seems in order the day after a game ends in a tie.

101-56. The Cubs top the century mark, and Andy starts building his shield for the playoffs.

99-56. After a series victory over the Cardinals, Andy's in a great mood to toast David Ross.

97-55. After a sweep of the Reds, Andy hopes to put a little hurt on the Cardinals.

96-55. With four 15 game winners in the rotation, Andy enjoys some delicious Cake.

93-53. The Cubs clinch the Central, but Andy has bigger plans.

92-52. Time for another rubber game, so grab your Sex Packets as Andy prays for a midweek humpday beatdown.

89-50. The Cubs drop a game and a series to the Brewers so not surprisingly Andy is a tad frazzled.

89-49. The Cubs await a rubber match with the Brewers as Andy gets impatient for October.

88-48. Frisco is in the rearview with the Brewers on deck, Ron Santo memories, and more.

84-47. As rare as a shooting star or a four leaf clover, Andy is happy and content with the Cubs.

81-45. The Cubs sweep the Padres, and Andy is witness to one of the games. Plus, Cubadaweek and more!

75-43. The Cubs take both ends of a double-header, AND Ryan Braun got dinged up. Andy's thrilled.

73-43. After dropping two in a row to the Cardinals, Andy looks at the bright side as only he can.

72-41. A ten game win streak has Andy as happy as you've ever heard him. Enjoy it now, before the collapse.

66-41. Andy rejoices in another miraculous (but lucky) comeback victory.

65-41. This may be the LEAST angry Andy has been about the Cubs in ages.

63-41. Andy is still processing the strange come-from-behind victory against the Mariners.

59-40. After the Cubs drop two straight to the White Sox, Andy shows why this podcast has a profanity warning.

59-38. After squeaking past the Brewers, Andy gets ready for the Crosstown Classic with the White Sox.

57-37. The Mets series is over, and Scott McGee comes by for Cubadaweek.

56-37. Andy doesn't see the glass as half full, he sees it as broken and leaking.

55-36. After winning the series against Texas, Andy steadies himself for the hated Mets.

53-35. The All-Star game is in the rear view mirror, but there's still time for Cubadaweek with Scott McGee.

The All-Star Game/Break. Andy is enjoying the promise of the ASG rather than drowning in the current dread. For now.

52-33. Andy's anger at losing has turned into dejection and panic.

52-31. Andy looks ahead to the rubber game with Cincinnati, as well the All-Star break.

51-30. The only thing distracting Andy from the pain of the Mets series is remembering The Hawk being beaned in the face. The misery level is that bad.

50-26. After serious pain, Andy AND the Cubs come roaring back.

47-24. The losing streak hits four games and Andy hits the roof. Or the bottom. Or both.

47-22. The Cubs lose the first two games of the series to the Cardinals, and Andy struggles not to lose his mind.

47-20. After a sweep of Pittsburgh, Andy looks ahead to St. Louis. Plus, fond memories of "The Sandberg Game" and more.

44-20. Andy fights to recover from losing the series to Dusty's Nationals, Scott McGee helps the dogs pick the Cubadaweek, and more.

43-18. After saving the series in Atlanta, the Cubs head to DC and Andy hopes they'll "Drown 'em in the Potomac!"

40-17. Andy waits with a gambler's patience on the rubber game of the Philadelphia series, and more.

39-16. Andy comes to terms with the end of Jake Arrieta's amazing streak, throws bouquets and bases around talking about manager ejections and much more.

37-15. The Cubs take the Dodgers series 3-1, and Andy welcomes Scott McGee for Cubadaweek!

35-15. Two games represent the bullpen's zenith and nadir for Andy. Welcome to June.

34-14. After sweeping the Phillies Andy is looking forward to the Kershaw-free Dodgers, plus memories from 1987, and more.

28-11. An ugly series loss to the Brewers, and a visit from Scott McGee for Cubadaweek.

27-9. Andy basks in the glow of beating the Pirates, fondly remembers a few classic Cub fights, and more.

25-8. Andy tries to shake off an ugly doubleheader, and Scott McGee joins us for Cubadaweek!

25-6. It seems like only rain can slow down the Cubs. Well, rain and a sketchy bullpen.

21-6. Andy revels in the sweep of the Pirates, taking the first one from Washington, and visits with Scott McGee for "Cub-a-da-week"

19-6. Even amidst winning baseball, Andy finds things to complain about.

17-6. Andy rides out another rain postponed game in-between a great win and a tough loss.

DESCRIPTION
A lifelong Cubs fans uphill battle during the season of highest expectations...

Archived from iTunes at https://itunes.apple.com/us/podcast/eamus-catuli-on-the-radio-misfits-podcast-network/id1097961642. Items in this collection are restricted.
ACTIVITY