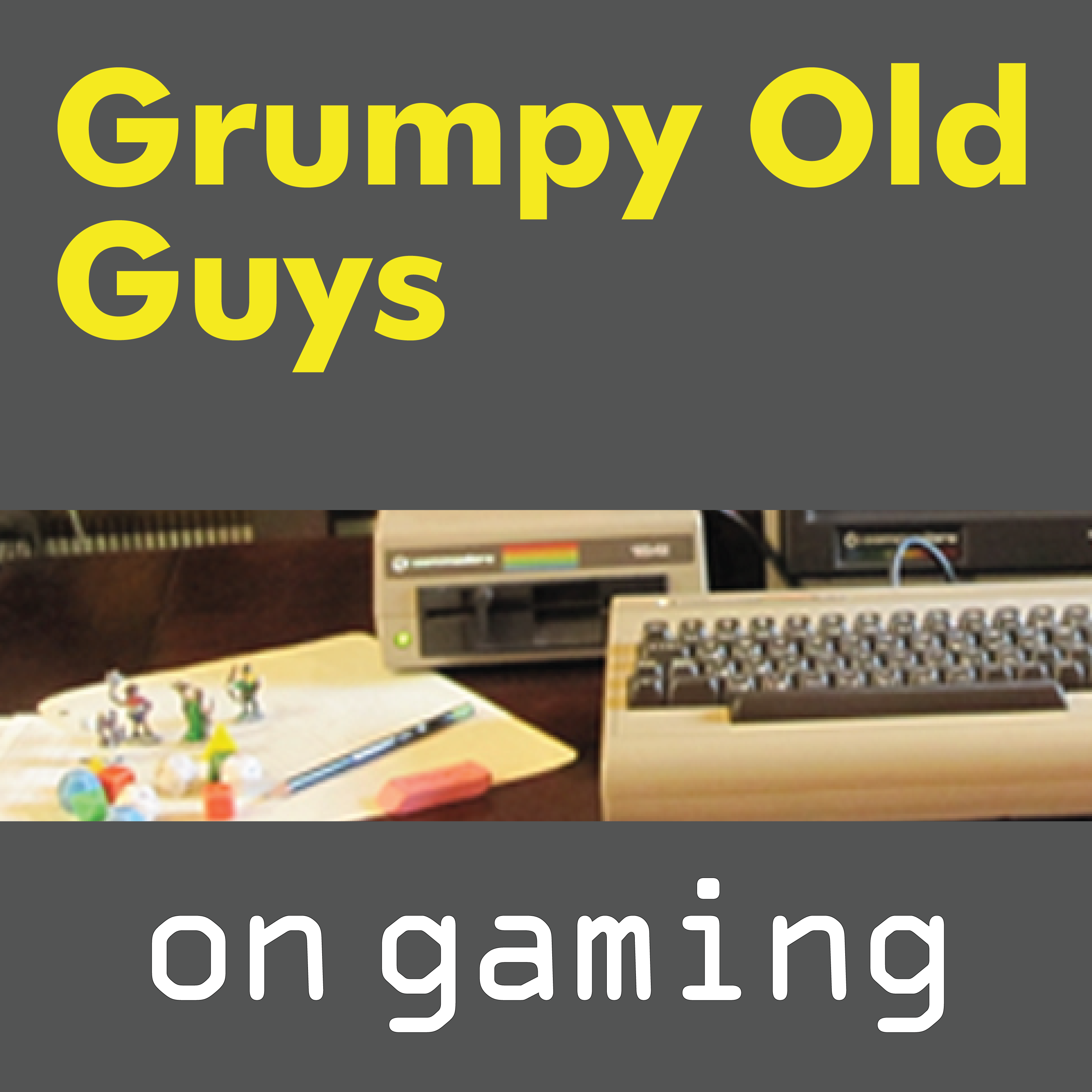 The Grumpy Old Guys are a group of forty-somethings who have been gaming in one form or another since before high school. In this netcast, anything gaming-related is potential fodder for discussion, whether it be brand new or a relic of decades past. The Grumpy Guys frequently disagree, and they're occasionally disagreeable, but we hope you find this show entertaining, and perhaps even edifying.

The Grumpy Old Guys take the Wayback Machine to the 1980s and talk about the arcade game and cultural phenomenon PAC-MAN.

The Grumpy Old Guys take a loot at a classic board game that's older than they are. Monopoly is the classic game of real estate. Build monopolies, develop your properties, and drive everyone else into bankruptcy.

Star Wars: Battlefront II is a shooter developed by Pandemic Studios for LucasArts. It was released, depending on which continent you live on, in late October or early November 2005 as a sequel to Star Wars: Battlefront, which had been released the year before. It takes place late in the Republic, when Palpatine is still Chancellor Palpatine instead of Emperor Palpatine. You play a clone trooper fighting the separatists. For reference, Revenge of the Sith had been released in May 2005.

We continue our dive into the bargain basements of the gaming world with Star Wars: The Force Unleashed. This is a third person, mostly, action adventure/jumping puzzle game developed and published by LucasArts. Released originally in 2008 for multiple consoles. It was released on Mac OS and Windows with the release of the Ultimate Sith Edition in 2009. A sequal, Star Wars: the Force Unleashed II, was released in 2010.

This week, the Grumpy Old Guys take a look at War Thunder, a flight and tank combat game from Gaijin Entertainment, and World of Tanks from Wargaming.

Expendabros is a side scrolling platformer with a definite 80's feel. Ever wonder what Mario Bros would be like if Mario packed heat and Luigi carried a knife? Well, wonder no longer! The Grumpy Old Guys take put this game developed by Free Lives and published by Devolver Digital. Currently available for free on Steam.

Card hunter is an odd hybrid of D&D style role playing game, board game, and deck building game. It was developed by Blue Manchu Games and originally released as a browser-based game in 2013. Clients for Windows and OS X were released in 2015. The browser version is currently available at cardhunter.com, and the client for PC and Mac is available on Steam.

Clicker games, also known as idle games, are an odd breed of games that literally play themselves. Many of them have strong DISincentives for active participation. Clicker Heroes is arguably the archetype of this style of game, or, at least, is probably the most widely known. Developed by Playsaurus, it was originally released for browsers in 2014. Clients for Windows, OS X, and mobile devices were released in 2015. Clicker Heroes is available on steam or can be played at clickerheroes.com.

Tropico 4 is a resource management simulation game. As El Presidente, you will guide your island republic to prosperity or financial ruin. The Grumpy Old Guys take it for a spin and see how it stacks up to other sim/resource management games out there.

The Grumpy Old Guys put the next generation in goat simulation to the test. Produced by Coffee Stain Studios and released in 2014, Goat Simulator puts the player in the role of a goat hell-bent on causing as much destruction as humanly, err. goatly, possible. You can try it for yourself at http://goat-simulator.com/

Deadlight is a side-scrolling 2D platformer developed by Tequila works and published by Microsoft for the XBox 360 and Windows systems.

Risen is a single-player fantasy action-adventure game created by Piranha Bytes and released in 2009.

Deponia is a point and click adventure game made by Daedalic Entertainment out of Germany. The unlikable protagonist, Rufus, engages in a series of far-fetched plans to escape from the junk planet of Deponia to the orbiting paradise of Elysium. It was released in 2012, a year before the Matt Damon movie that had more or less the same basic idea, although Matt Damon's character was far more sympathetic than the jerk in this game. Along the way, Rufus meets Goal, a girl that the game informs us...

Pokemon go is a downloadable augmented reality game for Android and iPhone made by Niantic. Capture Pokemon with Poke Balls, grab some free stuff at Poke Stops, join 1 of 3 almost indistinguishable factions, and have your butt handed to you at a Pokemon Gym. And you'll need to drag yourself off the couch, because this game takes place out in the word, and you have to walk around.

The Grumpy Old Guys take a break from gaming to discuss the Amazon Pilots for Fall 2016. They weigh in on their opinions of The Tick, Jean-Claude Van Johnson, and I Love Dick, with a little bit of Archer thrown in as a bonus.

Smoak finally gets to escape from the PC and review a console game. Uncharted 4: A Thief's End is the latest in the action/adventure series developed by Naughty Dog and published by Sony Interactive Entertainment for the Playstation 4. Smoak discusses game play, aesthetics, comparisons to Tomb Raider, and overall level of fun.

The Grumpy Old Guys wax nostalgic about their 4 decades of Dungeons and Dragons. From the old boxed set through many revised editions, the Grumpy Old Guys have been playing this game longer than many of you have been alive. Basic D&D, AD&D, and editions 2-5 are all on the table. Pour yourself a refreshing beverage, sit back, and maybe stir up some fond memories of your own past campaigns.

The venerable pen and paper role playing game is in its 5th edition. The Grumpy Old Guys take a look at differences and similarities to previous editions. Topics include character classes, gameplay, and the overall feel of the game.

The deadline for upgrading to Windows 10 from Windows 7 or 8 is July 29. 2016. Should you do it? The Grumpy Old Guys present the pros and cons of the upgrade, including new features in Windows 10, features that are disappearing, and compatibility. They also discuss the security and privacy issues of Windows 10. In the end, whether or not to upgrade is a decision everyone must make for themselves, but this program presents information to help you in your decision making process.

This week, the Grumpy Old Guys review Magicka. Players control elemental wizards in an action/adventure game for solo or group play. Magicka is a deceptively complex game. The 8 elements can be combined in a staggering number of ways to create unique and interesting spells. And unlike many games, friendly fire is an issue. Yes, you can kill your friends! And we did. A lot.

In today's episode, the Grumpy Old Guys review Overwatch and compare and contrast it with Team Fortress 2.

Grumpy Old Guys on Gaming
Episode 9 - League of Legends vs Heroes of the Storm
May 6, 2016 by Dr. Chris
audio

In this episode, the Grumpy Old Guys wade into the MOBA category and review two currently popular examples of the genre - League of Legends and Heroes of the Storm.

Professor Al and Dr. Chris have a heated argument over Hearthstone, Blizzard's online digital deck building game. They discuss the game itself, the new expansion - Whispers of the Old Gods - and the game-changing introduction of Standard and Wild modes of play. Smoak and John occasionally chime in as well.

A planning session for upcoming shows devolves into an argument between Dr. Chris and John over whether the Legion expansion of World of Warcraft is worth bothering with, and many of Warlords of Draenor's deficiencies are examined. The facts are undisputed, but we get a good look at just how low John's bar is and how much he's willing to put up with in a game. Dr. Chris, as you might imagine, demands a lot more from a game before he's willing to hand over his money.

The Grumpy Old Guys assess the gameplay and philosophical ramifications of the classic tabletop board game, Chutes and Ladders.

The Grumpy Old Guys have a frank discussion about Borderlands 2, a first-person shooter developed by Gearbox and published by 2k Games. It was released in 2012, and as of March 2015 had sold over 12 million units across all available platforms. Topics of discussion include visuals, overall tone, interface, gameplay, customization options, and overall fun factor.

In this week's random episode, a planning session spins off in random directions. Dr. Chris is in a particularly bad mood and manages to offend most of the geek/nerd/gamer community in 9 short minutes. Targets of his commentary include The Big Bang Theory, gamer girls, Team Unicorn, Adrianne Curry, and gamer guys.

Star Wars: The Old Republic was first released in 2011, and adopted a free to play model in 2012. Recently, in 2015, Bioware began releasing content updates formatted as chapters for the Knights of the Fallen Empire expansion. With the new content, The Grumpy Old Guys take a look at this science fiction MMO-RPG to see if it's worth jumping into, or back into, as the case may be. In addition to the graphics and overall gameplay, The Grumpy Old Guys evaluate the story and assess whether or not...

In this week's random episode, the Grumpy Old Guys offer a behind the scenes look at our creative and production process. You get to witness the Guys, with varying levels of tech savvy, download the Elder Sign: Omen game. We also offer pointed commentary about Steam, Apple, the iTunes store, Google play, Android phones, and IOS.

In this week's random episode of Grumpy Old Guys on Gaming, the Grumpy Old Guys offer pointed commentary about Ender's Game, and contrast the book with the movie. They also discuss Filipino midget action movie star Weng Weng, touch on Danny Trejo, and talk about a wide range of Marvel movies, including various Captain America and Iron man films.

In this episode, the Grumpy Old Guys discuss Wildstar, a science fiction MMO from Carbine Studios. It was released in 2014 and went free to play in the fall of 2015.

In the first of the Grumpy Old Guys on Gaming random episodes, the Guys get into a disagreement about how good, or not, The Force Awakens is. While not a movie review show, per se, what they think of the movie becomes quite clear. With some incidental talk about Brick, Antman, and the upcoming Captain America movie thrown in.

For our first episode, the Grumpy Old Guys discuss games and game related events from the past year, and we indulge in some reminiscing about games of our youth. We touch on the impact of Satoru Iwata's death, steam machines, China's lifted video game ban, World of Warcraft, and a range of other topics.

DESCRIPTION
The Grumpy Old Guys are a group of forty-somethings who have been gaming in one form or another since before high school. In this netcast, anything gaming-related is potential fodder for discussion, whether it be brand new or a relic of decades past. The Grumpy Guys frequently disagree, and they're occasionally disagreeable, but we hope you find this show entertaining, and perhaps even edifying.

Archived from iTunes at https://itunes.apple.com/us/podcast/grumpy-old-guys-on-gaming/id1080102148. Items in this collection are restricted.
ACTIVITY