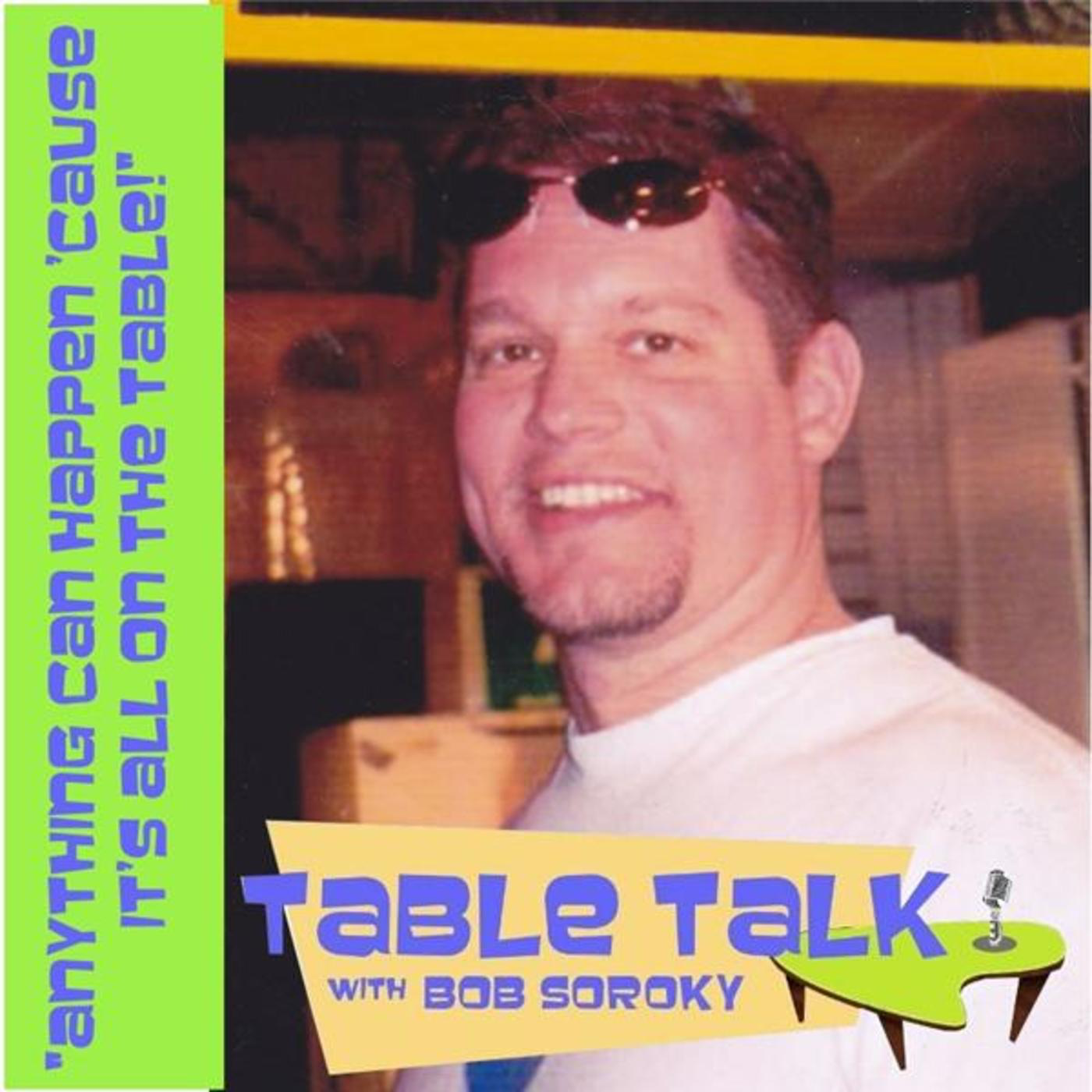 Welcome to TABLE TALK WITH BOB SOROKY, an engaging one-hour talk show out of Cleveland that centers on just about anything you can imagine; from serious issues likes politics, religion, health and fitness, the economy and local topics to more laid back subjects like movies, music, sports, aviation, video games and yes, even science fiction. Anything is possible because it’s all “on the table”! More importantly, it’s about YOU, the listener, sharing your opinions with those of the host in a gigan...

The final Thursday night show! Tonight, I will be chatting with aerobatic pilot and former Red Bull Air Racer Michael Goulian. Also, iPhone gripes, the end of the Browns season, and news on my NEW radio show startin February 15th!

Tonight, I'll be sharing thoughts on the value of gift giving at Christmas, the crazy "Merry Christmas" vs "Happy Holiday" greetings battle, and a special reading of "Jukebox Miracles", a poem by fellow cyclist Don Barnett.

Up in arms about the TSA pat-downs? Let's talk about it! Also, what are YOUR Thanksgiving plans this year? Plus, started that Christmas list yet? I have!! Tune in at 9pm!

Tonight, my interview with Sarah Swan and Bryan Carnes of the National Museum of the U.S. Air Force in Dayton, Ohio. Also, thoughts on the Cavs, Browns, and the end of the cycling season.

Tonight, we'll be talking with local artist William Kless and his work showcasing the history of Cleveland amusement parks and railways. Also, a recap of my summer, from movies to cycling to air shows.

Hey Fans: Tonight, I will be sharing some great summer reads, thoughts on LeBron James, and a live chat with pro-cyclist Andy Clarke. Join me at 9pm!

Tonight, thoughts on government involvement in our lives. Also, tell me your July 4th traditions!

Tonight, best-selling author and movie critic LES ROBERTS joins me to chat movies. Also, what is summer to you? And, maybe a thought or two on that crazy oil spill. Tune in at 9pm!!

Tonight, we'll be chatting with SCOTT COWAN of Century Cycles about everything bicycle! Also, thoughts on last weekends Red Bull Air Race in Detroit, and of course, more Annoying Observations.

Tonight, I will be chatting with best-selling author Les Roberts about upcoming projects as well as some movie reviews. Also, Peculiar Observations, working in the retail world, and the Red Bull Air Race!

Okay Table Talk fans, back to business!! Join me this Thursday night where we'll talk new jobs, the Cavs complete playoff collapse, canceled TV shows, and whatever else we have time for!!!

Photographer Kurt Shaffer joins me for a chat on his artistic style and the arts in Cleveland. Also, my love/hate relationship with video games!

This week I will be discussing fitness tips with Jeff Farson of FITWORKS, and the arts community in Cleveland with Matt Charboneau of the COSE ARTS NETWORK.

So, when IS the right time to dump your current career and move on to other things? Let's chat about it on "Table Talk", Thursday night at 9pm!

Commentary on the Olympics thus far, good news about my "Fascinating Cleveland" segment, and my thoughts on the question, "How long do you wait for you industry to hire you back before looking elsewhere?" Join me on THAT one tonight at 9pm!!

Tonight, let's discuss our 'pet peeves', and I have plenty! Also, Facebook: A Year Later, local events in my 'Fascinating Cleveland' segment, and the Large Hadron Collider!

On Thursday's Table Talk show, I will be discussing an interesting book entitled "The Shack", the role I believe God plays in our lives, and more movie talk! Tune in @ 9pm

Tonight, I will be talking about business, the role of Government in our lives, and how does GOD work in our lives. Yep, all over the place, so tune in and help me make sense of it all!!

Tonight, I'll be recapping 2009, plus a chat with small business coach and author Diane Helbig, and my reviews of "Avatar" and "Sherlock Holmes".

I've got author Ted Bell ("Hawke", "Assassin", "Pirate", "Spy" and "Tzar") joining me on the radio show this week. Also, what IS the best dish at the Thanksgiving table? Plus, holiday traditions, seasonal "snap shots", Start Trek on DVD, and another take on the Browns. Tune in to Table Talk this Thursday at 9pm!!

Hey fans, I'll be having Cleveland's own "Frank Sinatra" and "Dean Martin" on the show to talk "The Rat Pack And More" and their Holiday performance schedule. Plus, my cell phone rant and my Top 5 video games!

So, casinos are coming to Cleveland. I like it. Hear why on this Thirsday's show. I will also have two women (Left and Right) joining me on the show to talk politics. Believe it or not, their opposing views brought them together, but guess what made them friends? Tune in at 9pm for the answers!

Hey Fans, tune in for the Halloween show this Thursday night. Call in and tell me the best costume you ever saw (or worn), best party, best haunted house, scariest movie! Will you be dressing up this year? (You'll find me out and about as Capt Jack Sparrow!) Also on the show, best video games and, of course, another Browns rant!

Tune in this Thursday night at 9pm where my special guest will be author and Cleveland "native" Les Roberts, who will chat with me about life as a writer in Cleveland and his early Hollywood years. I will also be breaking down the "political rant" and a quick thought or two on the Browns first win of the season.

Hey Fans, short show tonight. Tune in for this week's Rant (on the Browns) and a return to the "Fascinating Cleveland" segment where I'll talk fun Fall activities you can check out. Also, my final review on Dan Brown's "The Lost Symbol".

Welcome to the new date and time! On tonight's show, I will have Hawaii National Guard 2nd Lt. Robi Yucas on as my guest to talk the thrills of military aviation. Also, my thoughts on health care and "Fascinating Cleveland".

I'll have a few words on memories of 9/11, my take on health care, and the introduction of a new segment called "Fascinating Cleveland". Tune in!

Will try to hit the topics I missed last week...architecture, pet peeves, the MS150 Bike Tour and whatever else comes to mind! Love to hear from YOU as well!!

I will be recapping the MS150 ride of last weekend, plus a host of other topics, from summer blockbusters, TV shows, health care, and maybe even a little architecture.

A variety of topics on today's show. First, a new exercise you're gonna love. Then, I talk with Gary Colosimo, a local performer who will discuss crooning in Cleveland. And finally, an interview with Patti Substelny, spokesperson for the MS Society in Cleveland.

Episode 6 - First, I will be talking the Tour de France. If you've always been curious about this amazing race but never quite understood it, I will break it down for ya, from the different stages and team strategies to the meaning of all those jerseys. Then, in the second half, I will be talking with Red Bull Air Race pilot Michael Goulian! Tune in to a morning of speed!!!

Hey Gang, I will be doing part 2 of my discussion on Social Networking. We'll talk the ups and downs of this addictive pastime. And what do an energy drink and Facebook have in common? Well, tune in as my special guest, John Tymoszczuk, an eBusiness supporter, will give us the answer.

Hey all, Happy Independence Day!!! Just a half hour show today so you can all get a good jump on the holiday festivities. We'll talk a little '1776' and I've got some great July 4th traditions you'll love!! Tune in!

Episode 3: On today's show, we will go over the week's headlines, talk about all those Social Networking sites, and I will have Cleveland's own Rat Pack, Damion Fontaine (Frank Sinatra) and Scott Brotherton (Dean Martin) as my guests to talk about their live "Rat Pack and More" stage show.

The Premier Episode!!! We'll chat up the week's headlines in the first half hour, so have your opinions ready! In the second half, I've got Mike Petch of Century Cycles in Cleveland to discuss the do's and don't of buying and maintaining your bicycle. I will also open up a discussion to listeners about ethnic heritage and what part of it we still hold on to within our greater American culture. So tune in and let's make the first show a smash!

DESCRIPTION
Welcome to TABLE TALK WITH BOB SOROKY, an engaging one-hour talk show out of Cleveland that centers on just about anything you can imagine; from serious issues likes politics, religion, health and fitness, the economy and local topics to more laid back subjects like movies, music, sports, aviation, video games and yes, even science fiction. Anything is possible because it’s all “on the table”! More importantly, it’s about YOU, the listener, sharing your opinions with those of the host in a gigantic roundtable conversation.

Archived from iTunes at https://itunes.apple.com/us/podcast/table-talk-with-bob-soroky/id320627272. Items in this collection are restricted.
ACTIVITY