Poems of the Great War 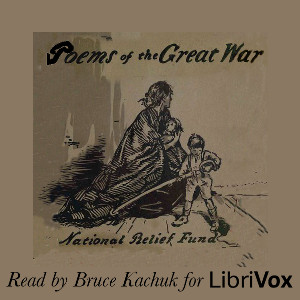 Poems of the Great War

LibriVox recording of Poems of the Great War by Various.
Read in English by Bruce Kachuk
At a time when the need for courage and tenacity of the British people was at its peak, these poems published at the outset of the First World War emerged as an attempt to bolster the war effort and reinforce the determination of a people and a country under siege.

Despite the fact that the war was to continue for another four dreary, deadly years, these poems - poems of hope, victory and a wished for peace - assisted a nation in peril to cope with the daily threat to its existence and helped remind the British people of the leaders they were in the fight for freedom and justice.

Much praise is due this diverse band of inspirational poets who assumed the rallying cry of a nation whose liberty was under threat and took it upon themselves to unite and arouse a people's resistance against the developing perils that were befalling them.

These are poets who knew there was a solution to the war's conundrum of escalating violence and that it lay through the issuance of a rallying cry for a great nation to uphold the rule of law and fight this new and fierce enemy - this enemy of peace-loving nations, an evil that would consume all in its path if permitted.

This rallying cry, this plea, this decree, this appeal to the resistance that defined a nation and which would ultimately spell victory is eloquently articulated by Poet Laureate, Robert Bridges, as he commands, "Up, careless, awake! Ye peacemakers, fight! England stands for Honour: God defend the Right!" - Summary by Bruce Kachuk


For further information, including links to online text, reader information, RSS feeds, CD cover or other formats (if available), please go to the LibriVox catalog page for this recording.