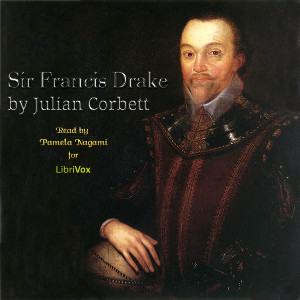 LibriVox recording of Sir Francis Drake by Julian Corbett.
Read in English by Pamela Nagami.
In this short book, the British Naval historian, Julian Stafford Corbett, chronicles the adventurous career of Sir Francis Drake (1540-1596), the farmer's son who became Queen Elizabeth's most feared privateer and her most daring and resourceful naval officer. In his quest for the gold and silver of Spanish Peru, he rounded Cape Horn, losing men and ships in that "enchanted void, where wind and water, ice and darkness, seemed to make incessant war." After capturing the treasure ship from the astonished Spaniards, he circumnavigated the globe. As King Philip of Spain amassed his Armada, Drake demonstrated how a naval power, attacking shipping in port and at sea, could cripple the enemy's credit and commerce. Corbett writes of Drake that at "its fullest flood he stemmed the tide of Spanish Empire. It was no less a thing than that." (Pamela Nagami)
For further information, including links to online text, reader information, RSS feeds, CD cover or other formats (if available), please go to the LibriVox catalog page for this recording.

Uploaded by librivoxbooks on December 27, 2018