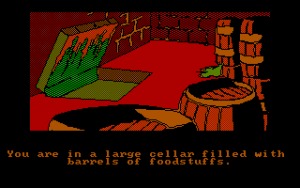 Software for MS-DOS machines that represent entertainment and games. The collection includes action, strategy, adventure and other unique genres of game and entertainment software. Through the use of the EM-DOSBOX in-browser emulator, these programs are bootable and playable. Please be aware this browser-based emulation is still in beta - contact Jason Scott, Software Curator, if there are issues or questions. Thanks to eXo for contributions and assistance with this archive.

" Doom is a 1993 first-person shooter game developed by id Software for MS-DOS. Players assume the role of a space marine, popularly known as Doomguy, fighting his way through hordes of invading demons from Hell."  - Wikipedia Doom for Windows 95 is also included on this page, and is recommended if you'd like to run this as a native application without using unofficial means.
favoritefavoritefavoritefavoritefavorite ( 25 reviews )
Topic: DOOM

This is Mario & Luigi, an un-official Mario game for MS-DOS released in 1994. To play this offline, you need DOS-Box (x64 Windows/non-Windows users) or NTVDM (x86 Windows only) Also, for everyone, first set up the Rotating Screen controls, or else you could accidentally flip your screen! Controls: Arrow Keys: Move Alt: Jump Ctrl: Run Space: Throw Fireballs (Fire Mario only) Esc: Leave This game is here in the Internet Archive for you to... Enjoy the game!
Topics: mario, old games, dos, super mario, unofficial

Developed by Artworx Software Company, Inc. Platform DOS Published by Artworx Software Company, Inc. Released 1995 Genre Strategy/Tactics Gameplay Cards / Tiles Perspective 1st-person Narrative Adult ESRB Rating Adults Only Description This revision of 4th edition of Strip Poker is absolutely new game. Done in VESA SVGA is runs absolutely on every computer. You can play with three girls or boys at ones. Photos of three new girls are presented. Also you can add Data Disks with other girls, and...
favoritefavoritefavoritefavorite ( 5 reviews )

"Quake is a series of first-person shooter video games, developed by id Software and, as of 2010, published by Bethesda Softworks. The series is composed of the eponymous game from 1996 and its nonlinear, standalone sequels which vary in setting and plot." - Wikipedia
favoritefavoritefavoritefavorite ( 3 reviews )
Topics: Quake, id Software, MS-DOS, Bethesda

Aliens have landed in futuristic Los Angeles and it's up to the Duke to bring the pain and show them the door. After the initial entries of side-scrolling platform games,  Duke Nukem 3D  introduces a first-person perspective to the series and turns the game into a full-fledged shooter with 2.5D graphics. Duke's arsenal includes pistols, pipe bombs, laser trip mines, Nordenfelt guns, a chain gun and various rocket launchers, but also his mighty foot to kick enemies. The game sports a high...
favoritefavoritefavoritefavorite ( 3 reviews )
Topics: Duke Nukem, DOS

Platforms Amstrad CPC, DOS, MSX, ZX Spectrum Developed by Iber Soft Published by Iber Soft Released 1989 Genre Action Gameplay Arcade, Shooter Perspective Side view Visual 2D scrolling Narrative Adult Description Toi Acid Game begins while the protagonist, the Toi, is having a date in a discotheque with his girlfriend, Zoi. And then, there appears the usual crazy scientist, in this case called Dr Acid, who kidnaps the hero's girlfriend with the intention to provide diversion to his diabolic...
favoritefavorite ( 2 reviews )

The Union Aerospace Corporation has been experimenting with teleportation technology on Mars' moons Phobos and Deimos. After early successes, something goes wrong. It seems the scientists have opened a gateway straight to Hell. Phobos base is overrun with demonic creatures, and the whole of Deimos simply vanishes. A squad of marines is sent to Phobos, but all except one are quickly slaughtered. It falls to the surviving marine to grab some guns and strike back at the demons. id Software's...
favoritefavoritefavoritefavoritefavorite ( 3 reviews )
Topics: MS-DOS, DOOM

The general goal throughout the series is to complete the levels by strategically placing bombs in order to kill enemies and destroy obstacles. Exploding bombs can set off other bombs, kill or injure enemies, and destroy obstacles. However, they can also kill or injure the player character, destroy powerups, and sometimes "anger" the exit, causing it to generate more enemies. Most Bomberman games also feature a multiplayer mode, where other Bombermen act as opponents, and the last one...
favoritefavoritefavoritefavorite ( 5 reviews )
Topics: dos, msdos, Bomberman, dyna

(one upload of Monkey Island is 1.5 GB which I can't even bother to wait through, the other one is EGA and 1.6 MB and contains a cracked copy protection screen, this one is VGA and 3.1 MB) Deep in the Caribbean lies Melee Island, ruled by the governor Elaine Marley. The cruel pirate LeChuck is deeply in love with her - so deeply that he refuses to accept his own death. As a ghost, he dwells with his undead crew somewhere near the mysterious Monkey Island. Meanwhile, a young fellow named...
favoritefavoritefavoritefavoritefavorite ( 4 reviews )
Topics: Monkey Island, DOS

Also For Amstrad CPC Developed by Titus France SA Published by Titus France SA Released 1993 Genre Action Gameplay Platform Perspective Side view Visual 2D scrolling Setting Prehistoric Description Prehistorik 2 takes up the story of its predecessor , for another caveman-era platform game. The hero must use his club to crush animal enemies, many of which then release bonus items to collect. He no longer needs to feed his clan, so there is no required minimum food target, unlike the original...
favoritefavoritefavoritefavorite ( 7 reviews )

"Doom II, also known as Doom II: Hell on Earth is a first-person shooter game by id Software. It was originally released for MS-DOS computers in 1994 and Macintosh computers in 1995. Unlike the original Doom, which was initially only available through shareware and mail order." - Wikipedia
favoritefavoritefavorite ( 1 reviews )
Topic: DOOM 2

"Flight Simulator is simulation "game" in which you pilot an airplane around the world. It started off as subLOGIC Flight Simulator on the Apple II, but was OEMed by Microsoft for the IBM PC. It was very popular, and one of few early games to provide a "3d" experience." - WinWorld
( 1 reviews )
Topic: MS-DOS

Platforms DOS, FM Towns, Macintosh, PC-98 Developed by Jeff Tunnell Productions Published by Sierra On-Line, Inc. Released 1992 Genre Puzzle Perspective Side view Interface Point and Select Visual Fixed / Flip-screen Description The Incredible Machine is a puzzle game where the player has to assemble a Rube Goldberg-type contraption to solve a simple puzzle. The game consists of a series of puzzles, each having a simple objective, such as "put the baseball into the basket" or...
favoritefavoritefavoritefavoritefavorite ( 4 reviews )
Topics: msdos, game

'QBasic Gorillas' is the legendary turn-based strategy game supplied with the first QBasic version. The game in which you take on the role of a giant gorilla is very easy to use: you have to adjust the angle and velocity of each throw, hoping to hit your opponent (controlled by the computer or a human player) with an exploding banana. Despite these simple conditions, the game is not as easy as it seems. Two difficulties have to be considered: the blowing wind and the skyscrapers on the monitor....
favoritefavoritefavoritefavoritefavorite ( 3 reviews )
Topics: msdos, qbasic, microsoft

Platforms DOS, Windows Developed by Dinamic Multimedia, S.A. Published by Dinamic Multimedia, S.A. Released 1996 Genre Simulation, Sports, Strategy/Tactics Gameplay Managerial / Business Simulation Sport Football (European) / Soccer Description Since we already have two entries for titles on this series (Pc Futbol 6 and Pc Futbol 7) and I have this game in my personal collection I will like to describe this series as a whole instead of describing this single version. This series were started by...
favoritefavorite ( 3 reviews )

Also For Macintosh Developed by SimTex, Inc. Published by MicroProse Software, Inc. Released Sep, 1993 Genre Strategy/Tactics Pacing Turn-based Setting Sci-Fi / Futuristic Gameplay 4X, Managerial / Business Simulation, Turn-based strategy Description Master of Orion overlaps with Civilization insofar as you are the leader of one of several races. Technological advance, realm expansion and combat are all key elements. Where it differs is in being set in space. The planet Orion itself is a lush,...
favoritefavoritefavoritefavoritefavorite ( 11 reviews )

Developed by Dynabyte Platform DOS Published by Dynabyte Released 1994 Genre Puzzle Pacing Turn-based Interface Point and Select Gameplay Dating Simulation, Game Show / Trivia / Quiz Narrative Adult Description Late Night Sexy TV Show is an adult-oriented quiz show with dating sim elements. The goal of the player is to become the soulmate of one of the three other contestants. To do so, he or she must: (a) learn the other contestant's tastes and preferences, and (b) earn enough money to...
favoritefavoritefavorite ( 2 reviews )

Released Dec 06, 2004 Platforms DOS, Windows Genre Adventure Perspective 1st-person, 3rd-person (Other) Narrative Adult Description Play the role of Richard, who hasn't had some action for the past two years! After watching some eventful TV, the over-ambitious hero decides to go to New York and try to score with a cast member of a popular TV series. Help Richard obtain his goal! Gameplay is still similar with its predecessor and other early Sierra text-based adventures. Type in 'verbs' to...
favoritefavoritefavorite ( 2 reviews )
Topic: AGI games

Civilization has the widest scope of any strategy game of its time. You are a leader of a nation. You begin in the Stone Age, and complete the game in the XXIth century (unless your civilization gets destroyed earlier). Your eventual goal is to become the dominant civilization in the world, either by wiping out everybody else, or being the first to get a space ship to Alpha Centauri. (Source: https://www.mobygames.com/game/sid-meiers-civilization )
favoritefavoritefavoritefavorite ( 6 reviews )
Topics: DOS, Game

Developed by Brøderbund Software, Inc. Platform DOS Published by Brøderbund Software, Inc. Released 1990 Genre Adventure, Educational Gameplay Puzzle elements Interface Menu Structures Narrative Detective / Mystery Educational Geography, History Description This time you continue to catch Carmen Sandiego and her american gang in the U.S.A. Breaking from jail somewhere in Europe, she comes to yankees to steal their treasures. You as ACME detective have to travel from town to town on the tail...
favoritefavoritefavoritefavorite ( 13 reviews )

Developed by Windmill Software Platform PC Booter Published by Windmill Software Released 1983 Genre Action Gameplay Arcade Perspective Side view Visual Fixed / Flip-screen Description Take control of a mechanical digging machine as you tunnel your way through the earth, searching for valuable gems and the even more valuable bags of gold! But watch out for Nobbins and Hobbins, and don't be careless enough to let the bags of gold crush you! Digger is an arcade game combining elements of the...
favoritefavoritefavoritefavorite ( 12 reviews )

Monopoly Deluxe  is a conversion of the classic board game. The game allows for some user-based rule changes such as money given for landing on "Free Parking". From Mobygames.com.  Original Entry The ZIP file contains the original DOS game. Use  DOSBox-X  to run it on most PCs. The RAR file includes the game with DOSBox-X, ready to run on Windows.
Topic: Monopoly

DESCRIPTION
Software for MS-DOS machines that represent entertainment and games. The collection includes action, strategy, adventure and other unique genres of game and entertainment software. Through the use of the EM-DOSBOX in-browser emulator, these programs are bootable and playable. Please be aware this browser-based emulation is still in beta - contact Jason Scott, Software Curator, if there are issues or questions. Thanks to eXo for contributions and assistance with this archive.

Thank you for your feedback - we will continue to upgrade/bugfix the emulator going forward.

IF YOU ARE EXPERIENCING ANY ISSUES WITH RUNNING THESE PROGRAMS, PLEASE READ THE FAQ.

There is also the MS-DOS Showcase, a collection of selected interesting or historical programs.