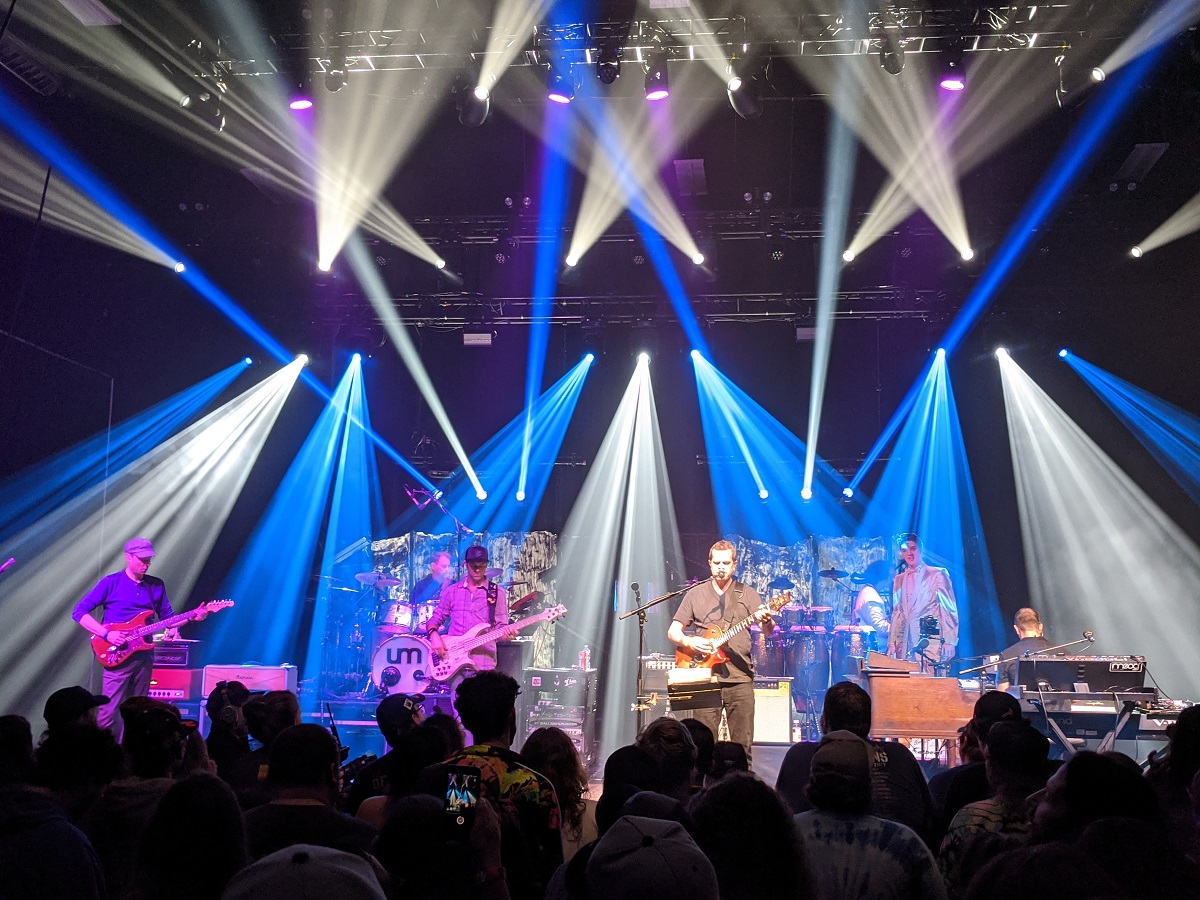 Reviewer: mgsmallz - favoritefavoritefavoritefavorite - February 19, 2020
Subject: In the hall of the rock and roll King
This was Umphrey's McGee's first appearance at Graceland Soundstage, opened in 2017. Part of their Hindsight 20/20 winter tour, their Wednesday night show kicked off a 4-night run that took them to another venue they'd play for the first time, the Caverns in TN, followed by 2 shows in Asheville, NC.

40's Theme kicks off the party in fine fashion with UM getting right into it with this malt liquor-inspired throwdown. The mellow, laid-back jam starts to take flight around 6 minutes and never looks back, creating a pressure cooker that eventually explodes in a flurry of duel-guitar riffs and thundering drums/bass. Faces melted right from the start - just what we've come to expect from UM!

After a brief thank you from Brendan Bayliss, White Man's Moccasins is next. This Local Band Does OK (2002) chestnut is played only a handful of times per year, but this was its 2nd performance in 2 weeks.

Mocca goes click-clocking into Got Your Milk (Right Here), a nifty little pop rocker which usually pays off with a big jam. On this night, the hard-charging jam quickly turns more atmospheric and ethereal. The space noodling starts to hint at Out Of Order and before long we are in the song proper.

Another old standby from the early aughts, OOO shows the band's incredible technical prowess and ability to change time signatures with fluidity and ease. OOO drops into No Diablo, the newest song of the night (2013). Afterwards Brendan dedicates the song to a fan from Japan who was in attendance.

A "we want the funk" crowd chant is picked up by the band and quickly turned into Soul Food II, the Jake Cinninger classic from his pre-UM period with Ali Baba's Tahini. This abbreviated version segues into Women, Wine, and Song and the crowd sings along with glee. After a short jam that doesn't stray far from its WWS origins, we arrive at the final song of the set: Higgins.

Higgins, with its riffs and chord progressions that always remind me of 38 Special, is a crowd favorite for many reasons, least of which is the jam that always ensues. On this night it starts to soar around 6 minutes and develops into a life-affirming major key outburst before rounding back to finish out the remainder of the song in usual furious fashion. End set one.

Set two begins with the slow, dramatic build of Nothing Too Fancy, the oft-played closing tune on LBDOK. Beginning any set with N2F is like standing at the base of a mighty mountain you're about to ascend. You know the climb going forward will be tricky, technical, and unpredictable, maybe even with a few cliffhangers, but the reward when you reach the top will be totally worth it. N2F inevitably delivers a rush of energy from the band and audience alike. This version morphs into a dark, industrial jam that winds its way to Much Obliged.

Much Obliged, another UM classic and always a welcomed addition to any set, has a rocking jam that has some Allman Bros flavor added to it. When it lands in Hajimemashite, the old-school combo from their first live album, Songs For Older Women, is complete. Haji always aims to hit you right in the solar plexus with its introspective lyrics and closing feel-good jam that literally explodes with unbridled enthusiasm.

The band is definitely feeling good now. Brendan takes some time to talk about how the band got the rare chance to bond together over touring the hallowed grounds of Graceland earlier in the day. That struck me, coming from a group of guys who have spent a lot of time together touring over the years. The rigors of the road do not leave a lot of time for cavorting and sightseeing, so whenever they do get the chance to do so they are very grateful.

Ringo is next, another heavy-rotation classic from LBDOK. This Ringo goes to some dark, scary places and has a Meeting In The Aisle (Radiohead) vibe before closing up with a super-slick segue into Wife Soup. Wife Soup doesn't usually vary all that much unless there are horns or a choir accompanying it. This is a strong, inspired version but fairly straight forward nonetheless.

Next up is The Linear. Featuring more of Brendan's signature introspective lyrics and colorful keyboard flourishes from Joel Cummins, this Linear doesn't waste time in getting us around that final crevice to glimpse the mountaintop that awaits. It is the inevitable, inexorable ascent to the mind-crushing peak of N2F, and it is as pure an adrenaline rush as you're going to find. Fancy finishes up the fitting bookend to an exhilarating set of music.

Umphrey's encores with a tender reading of Graceland, not played in nearly 10 yrs. If ever there was a perfect time to bust out this Paul Simon gem, this was it. Graceland then segues right into Glory. Just when you thought you were done climbing, this jam keeps finding higher peaks to reach. The endorphins are surging now and there's no going back! UM brings it all back home with one final outpouring of seemingly limitless musical talent.

A new venue but as old-school a show as you're going to get, with a song vintage of about 2001-02. Highlights are numerous and include 40's, Higgins, N2F, Much Obliged>Hajimemashite, Ringo, and the encore. I give this show 4/5 because it is solid, grade A Umphrey's but nothing to write home about (except "hey mom, they played Graceland at Graceland!!"). A very good, clear audience recording too, by the way. Always thank your tapers - THANK YOU!!!